Megalopterans can be an important source of food for trout and they're routinely neglected by anglers.

See the Corydalidae and Sialidae pages for details about each of the two families, of which Corydalidae is the most important.

Specimens of the Insect Order Megaloptera 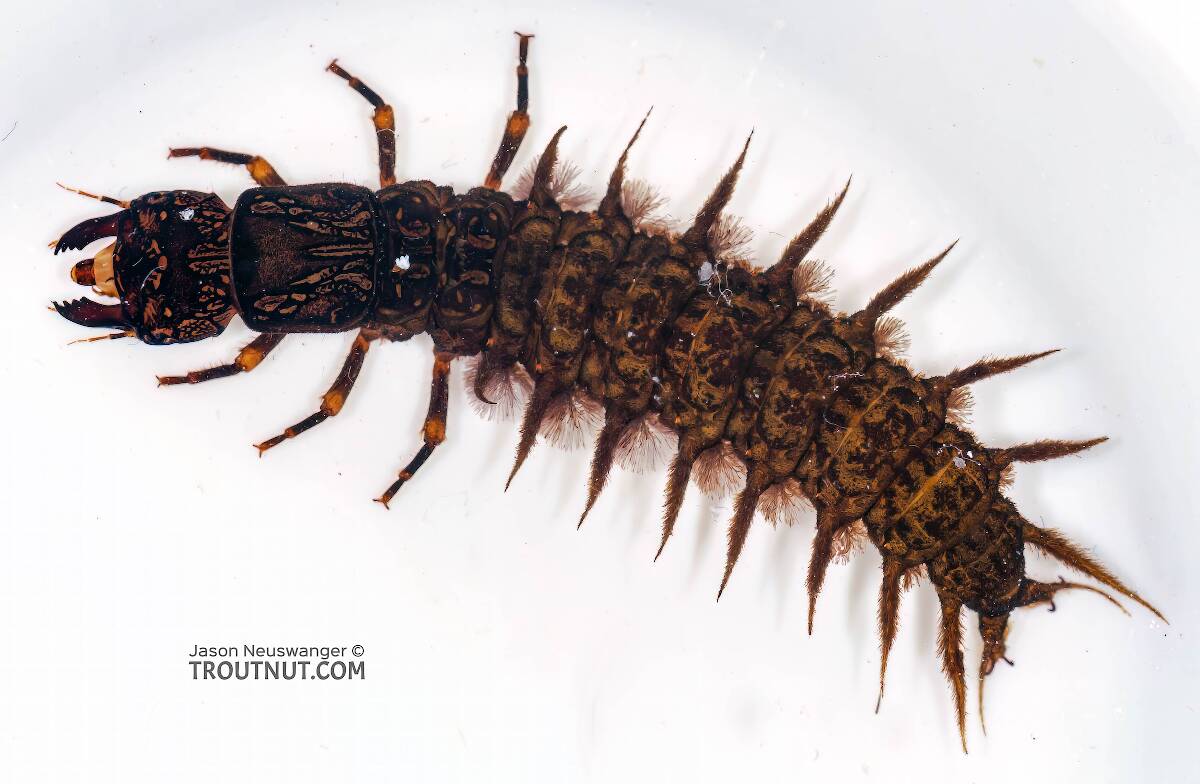 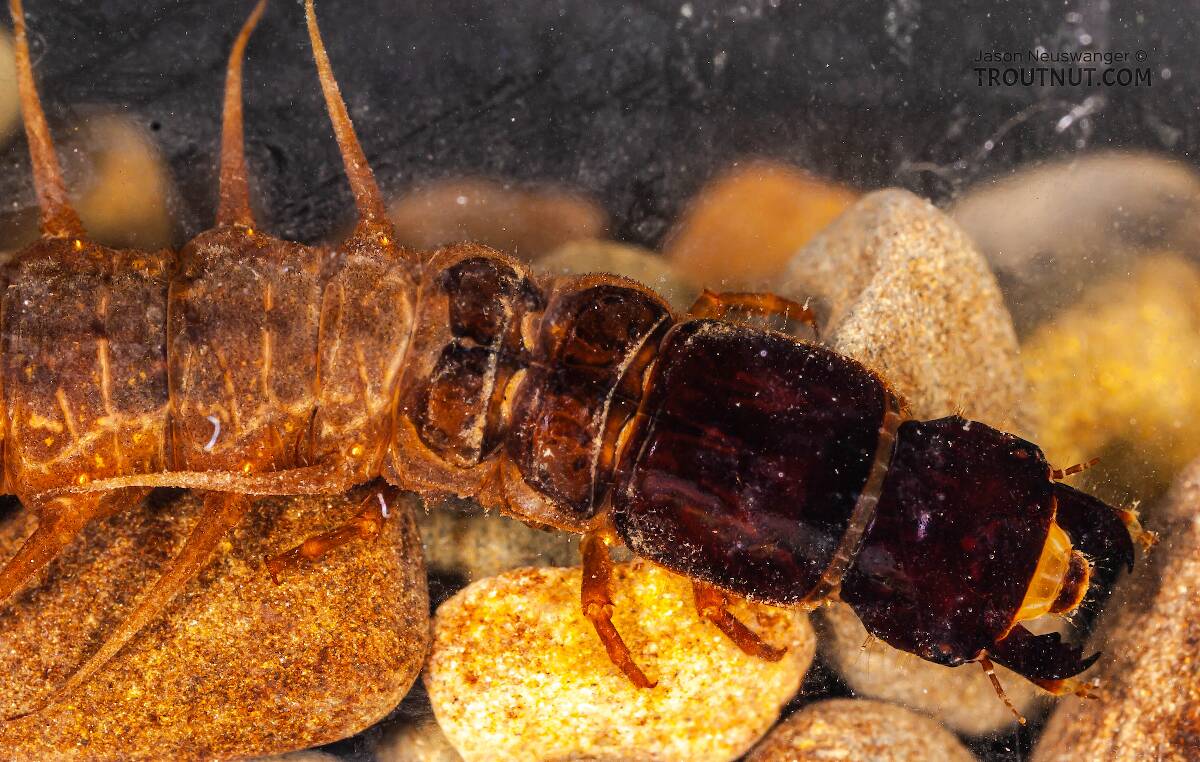 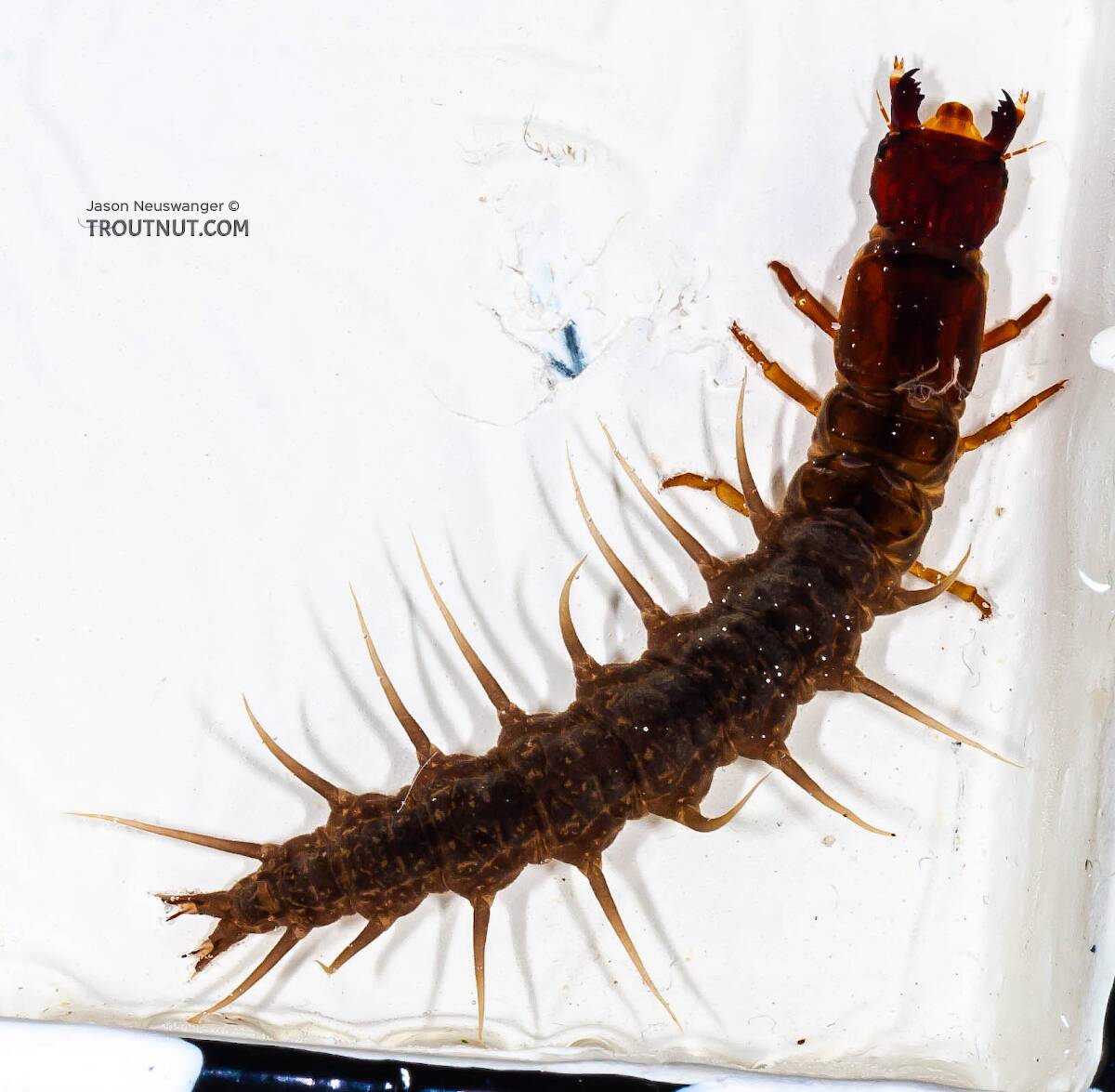 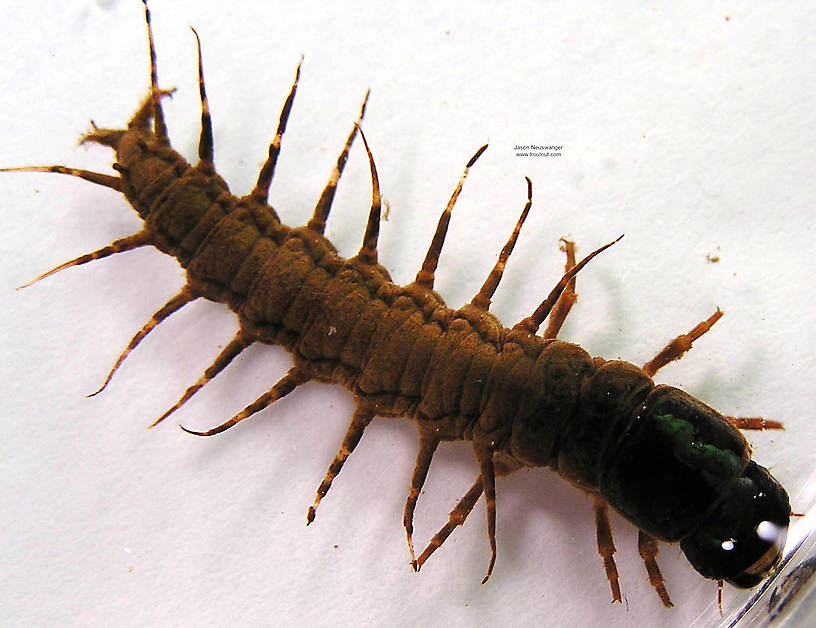 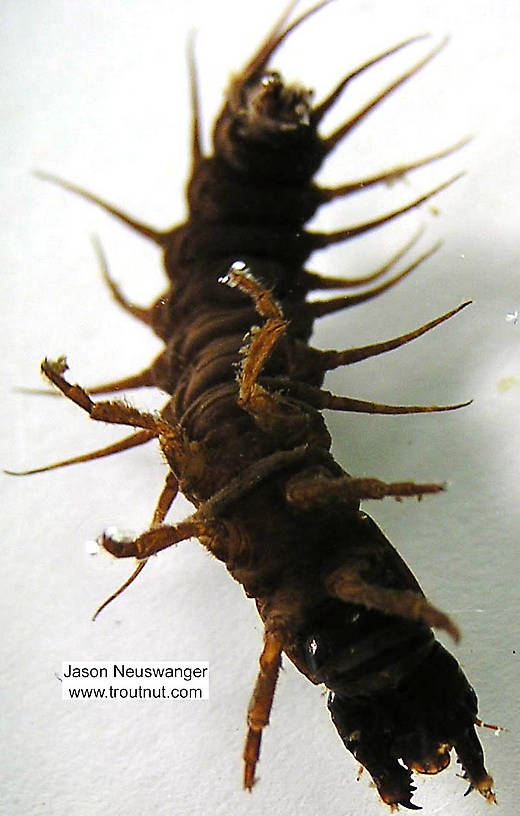 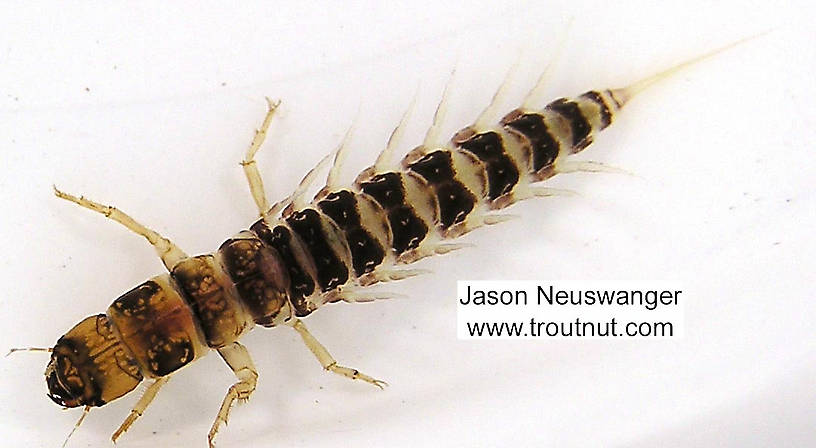 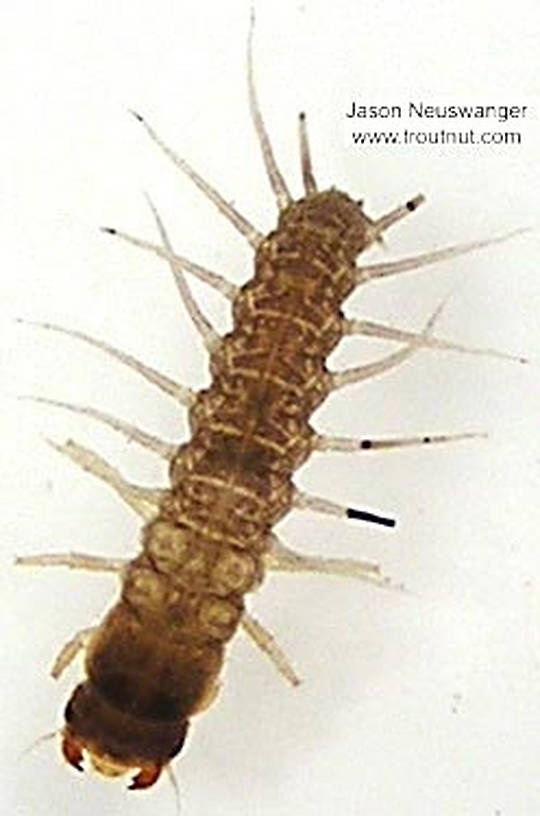 I believe this is a verr young hellgrammite that just hasn't darkened to its regular color yet, but I'm not sure.
Collected February 2, 2004 from unknown in Wisconsin
Added by Troutnut on January 25, 2006
Corydalidae (Hellgrammites) Hellgrammite Larva
3 Pictures 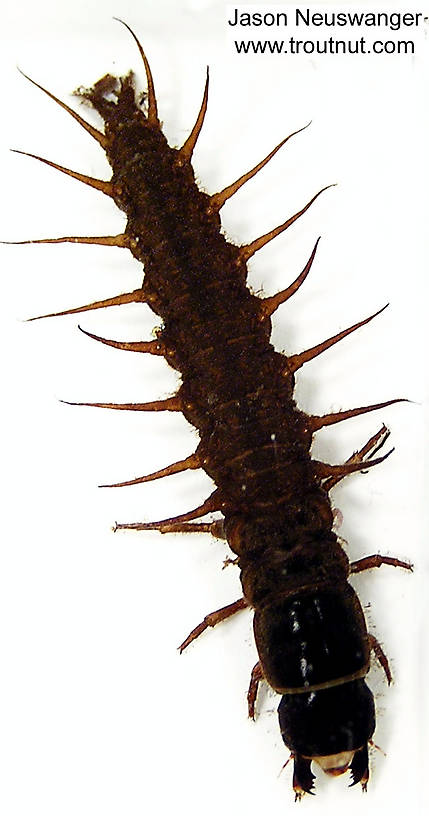 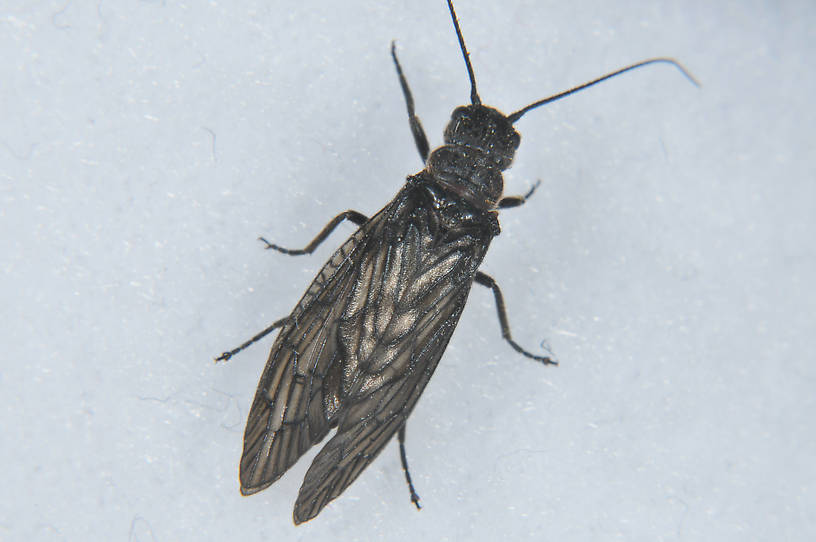 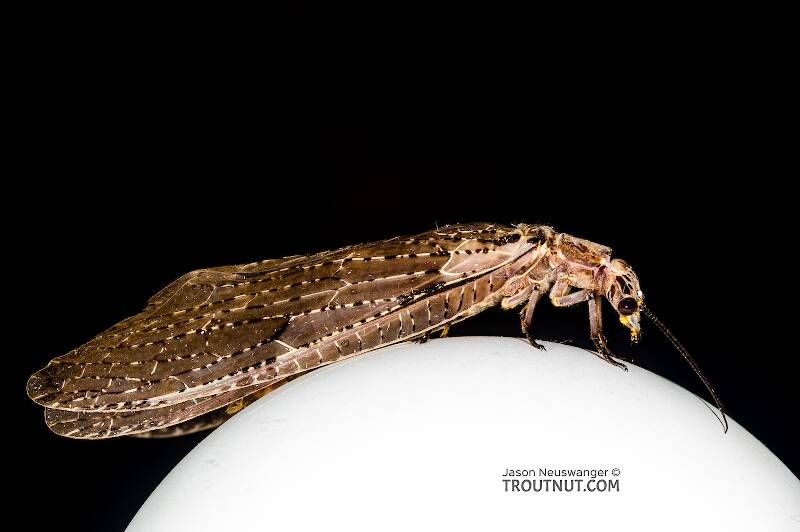 Best time of year to harvest hellgramites
13 replies
Posted by Rblouser on Jun 27, 2008 in the family Corydalidae
Last reply on Jun 11, 2019 by Sapperstyle
I have just recently started fishing with hellgies and need some info on the best time of year for catching, bait. Any insight will be greatly appreciated
Reply
Dobson Fly
26 replies
Posted by Jesse on Jun 24, 2011 in the genus Corydalus
Last reply on Sep 12, 2013 by PaulRoberts
What can anyone tell me about the Dobson Fly?

(General now guys, we don't have to go all scientific with it ha)!
Reply

Anyone have hellgrammite experiences to share?
56 replies
Posted by Troutnut on Nov 18, 2006 in the family Corydalidae
Last reply on Aug 23, 2013 by Trout_House
I'm working on a magazine article about hellgrammites, which I think are a generally underrated food source and an extremely cool group of insects.

I'm going to do a lot of research and combine it with my own experiences, but many of you have been fly fishing longer than I've been alive, so I'd like to see if any of you have stories about them -- catching big trout with stomachs full of them, finding trout rising to the dobsonfly adults, getting bit by these bugs, or anything else.
Reply

Fishfly is not a hellgramite
5 replies
Posted by Ofieldstrea on Jun 24, 2007 in the genus Nigronia
Last reply on Jun 28, 2011 by PaulRoberts
Troutnut ... the term "hellgramite" is reserved for the Dobsonfly (Corydalinae). Though the Fishfly (Chauliodinae) and the dobsonfly are from the same Megaloptera family, at first glance appear similar, and have similar stages of development, they are from different subfamily with differing subspecies and have very different morphology and biology.

The dobsonfly inhabit the more oxygenated waters of riffles and possess only tuffed gills for respiration. The fishfly inhabit the quiter waters of pools and still water. Fishflies have a primative gills called lateral filaments, while some species of fishfly utilize breathing tubes, located posterior, to accomodate the use of atmospheric oxygen for breathing in low dissolved oxygen envirions while remaining submerged.

So .. it is incorrect to use the term 'hellgramite' when talking about the fishfly larvae. They are simply, 'fishfly larvae'. You really should change your reference.


--------------------------
O'fieldstream
Reply
Sialis
8 replies
Posted by Entoman on Jan 20, 2011 in the family Sialidae
Last reply on Jan 20, 2011 by Taxon
Sialids (Alder Flies) are fairly common In Northern California, Southern Oregon, and many other locations in the west as well. You will see them quite often in small numbers, less often in numbers of interest to the fish, and occasionally in numbers large enough that you better have a good imitation or you're in deep trouble. Forget about the larva and pupa. The larva live under a cover of detritus, crawl to shore undercover, and pupate terrestrially. It's the Adults that matter.

Sometimes it's hard to make out how many are actually in the swarm if you don't have good backlighting. My standing rule is: If the fish are rising and Alders are irritating the crap out of me, it's time to tie on an imitation. Anybody that's been in a serious fall of Alderflies knows what I mean by irritation! You'll want to move the boat... but don't. They really hate to fly, kind of like little black turkeys. A mayfly or midge will rest on you awhile and then fly off. A caddis my like to cover a little ground, but will usually fly off if you swat at him - if you ignore them they will usually just sit still. The same with stones. Alders on the other hand, are a different bread of cat. First, they don't land on you, they crash into you. Second, they'll run you up and down like a race horse on a fast track. Finally, swatting at them only makes them go faster and they will NOT fly off. The good news is they're totally harmless and the first 18 incher you hook up with will make you forget all about them. Don't use your hat to swat at them; especially if its a ball cap. Case in point - I remember a time getting into the car with a buddy after loading up the prams. I fired up the heater as he asked me a question. When I turned and opened my mouth to respond, I simultaneously took off my hat. Before I could utter a word a half dozen or so of the little devils ran down my face with a couple ending up in my mouth. My friend was laughing so hard, he ended up choking worse than me. On second thought, if you don't have a good imitation - move the boat.

There refusal to fly once landed is fascinating and it's amazing how fast they can run. I remember the time I was chasing one around in my pram trying to get a specimen for my collection. I'd trap it with my fingers delicately to avoid damage, but it always seemed to get away. Things got so frantic that I almost swamped the boat. A nearby buddy asked if I needed any help. He thought a mouse was loose.

I've had some great days over the years with Alderflies on a few mid-elevation west slope Sierra lakes, the spring fed waters of the Pit River drainage, and a host of small ponds and reservoirs in the foothill country east of Redding. When first encountered, I made the mistake of assuming they were caddis. Not that it mattered much as far as the fishing goes. Actually, they are pretty easy to tell from Caddis with their large heads, short antenna, and stocky bodies that reach much closer towards the ends of their wings. All in all, a much more substantial creature than any caddis of similar size. Now, they look as differentiated from caddis as dragonflies do from Hexigenia's. I smile when I think back to those simpler and unsophisticated years. Not that doubts about their identity didn't nag me. I looked into other possibilities, but this was back in the late 60's when the only descriptions in print described Alderflies as light brownish flies imitated with oak turkey quill. This ruled them out according to my way of thinking as ours are dark chocolate brown with sooty black wings. The gravid females have an under glow of burnt orange in the lower half of their abdomens (not unlike the shading you see in the big Pteronarcys stoneflies) that lightens them up a bit, but still they're mostly a very dark fly.

Contrary to conventional wisdom, I have always found them to be an excellent dry fly hatch when they're worth fishing at all. They're supposed to sink immediately upon contact with the water, but I have not found this to be so. I'm sure they probably drown fairly quickly, but time is a relative thing when fish are rising. On those rare occasions when the fall is heavy and the fish are into them, the right dry will usually bring up most of the rises cast over, so why go wet? No need to work this fly, just throw it out into the cruising lanes and let it sit for awhile. While they run like crazy on solid ground, they sit "stone still" on the water. I've tried a handful of different flies over the years, but never found one that works as well as the good old Troth's Elk Hair with the hackle trimmed underneath. the prominent head of trimmed hair simulates the look of the Sialids perfectly. Tie them bulky with a black body, brown palmered hackle, and Dk. moose body hair for the wing (works better than solid black). Keep the wing short to just beyond the bend. For sex appeal, I always add a little orange to the dubbing for the last third of the body to simulate the developing egg mass. Add it over the dubbing already on the thread, so this extra step doesn't add any time to the tying. It shouldn't look solid orange anyway. You'd think a closer matching Dk. brown body with black hackle and wing would work better, but the fish never agreed with me on that point. I only carry a half dozen or so, in the size I know I'll need for the area. Either #12, 2xl #12, or 2xl #10. If you're lucky (or unlucky) enough to be on the water when there's enough Alderflies to get the fish really going, you'll have a lot of fun with this fly.
Reply
7 more discussions