Though not as well known as the Hendrickson and Sulphur hatches of the Ephemerella genus, Drunella cornuta (Olive Morning Dun or Large Blue-Winged Olive) is nonetheless an important Eastern hatch.

Lloyd Gonzales, in his book Fly-Fishing Pressured Water, notes that this attractive olive-green mayfly can provide good-to-excellent morning fishing in the faster sections of many streams. He also mentions that it can hatch in surprising numbers and usually faces less competition for the trout's attention than many of the spring or evening-emerging ephemerellids. Yet, cornuta and its sister species have largely escaped the limelight. The renowned twilight hatches of big Ephemera drakes and many other popular mayfly species command fly fisher's attention at this time of year. As the days lengthen, fishing all of the available mayfly hatches would require a pretty long day astream, so most anglers choose to focus on the late afternoon and evening activity.

Nature seems to have several recurrent color themes, and one of these is gray-winged/olive-bodied aquatic insects. Perhaps this explains why the name "Blue-Winged Olive" is often held up as the poster child for common name confusion. It has been freely applied to a multitude of mayflies in various families, genera, and species. Prior to having a well-established common name, this mayfly was referred to by Gonzales as the Olive Morning Dun. However, it has already been added to the long list of "BWOs" on many Eastern/Midwestern hatch charts.

Time of year : Mid-May to mid-June, later on cold tribs and headwaters

Throughout much of the East and Midwest

Refer back to the Drunella and Ephemerellidae hatch pages for additional information. In Drunella fashion, the duns may break free of their nymphal skin somewhere in the last 12 inches or so from the surface.

Typically seen over riffles in the evening. The abundance of other mayfly activity at this time may be one reason that the spinner falls are reported to be of limited importance to the angler, but they can be significant in streams (or stream sections) where other activity is limited.

Environmental tolerance: Perhaps less tolerant than some Ephemerellidae species, Gonzales notes that populations have declined or virtually disappeared from streams that have been impacted by the release of untreated sewage.

The nymphs average approximately 10mm (excluding tails) and come in various shades of olive or dark olive brown. The namesake "horns" on the front of their heads can be seen with some magnification, but their broad, serrated forefemurs are fairly obvious.

Many standard "BWO" mayfly dun and emerger patterns in size 12-16 can work well during the emergence, though the brighter (nearly chartreuse) body color of freshly emerged duns can be worth imitating at times. Rises in fast water can be dramatic and splashy, much like the rises to some emerging caddisflies. "Dead-drifted" nymph imitations work very well before, during, and even after the emergence. Although Drunella nymphs are rather awkward swimmers, swimming nymphs can be very effective where faster water breaks into pools or eddies. 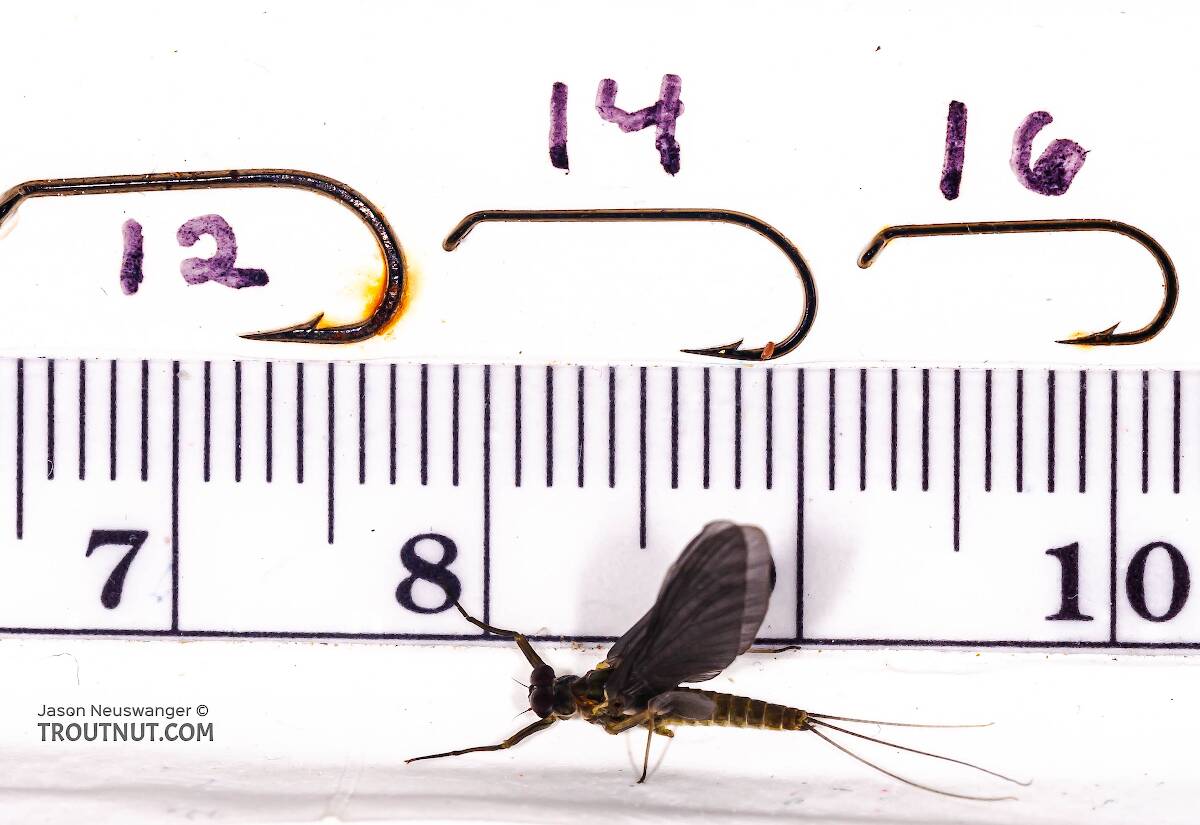 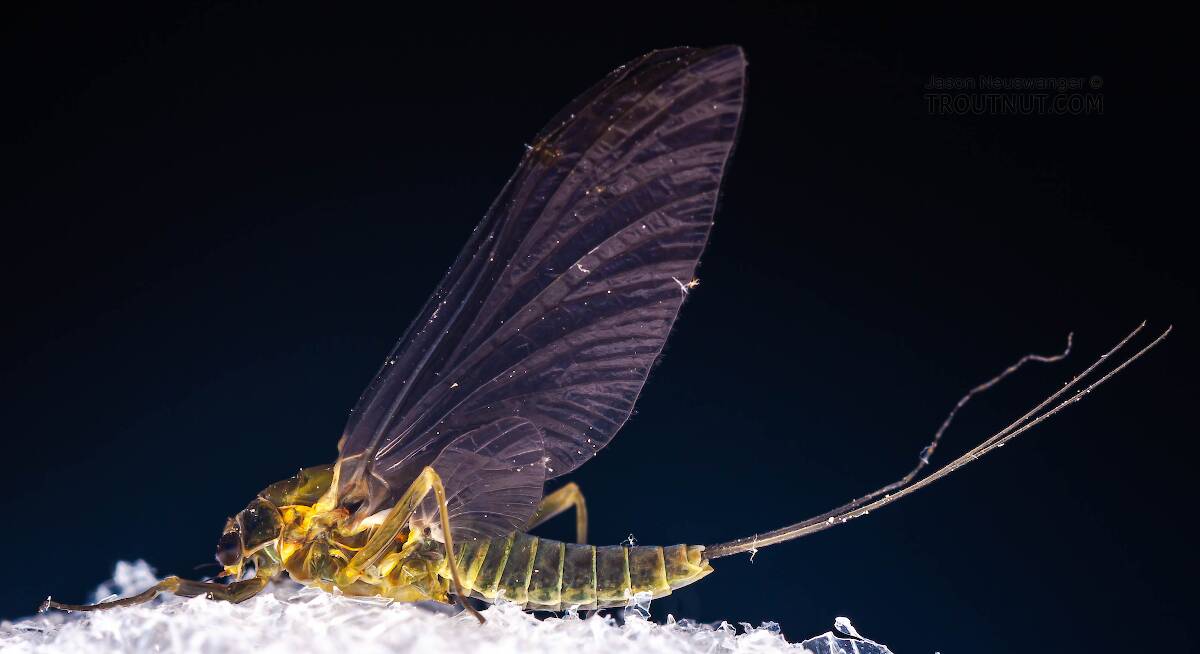 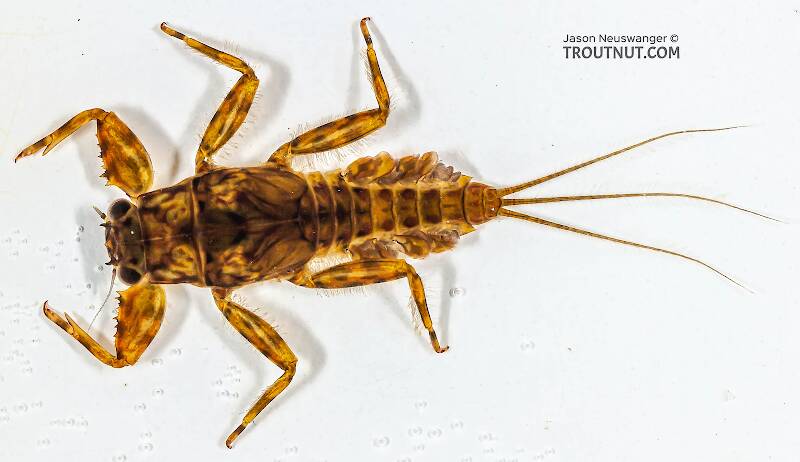 Collected June 5, 2005 from the Long Lake Branch of the White River in Wisconsin
Added by Troutnut on May 25, 2006
Drunella cornuta (Large Blue-Winged Olive) Mayfly Nymph
3 Pictures 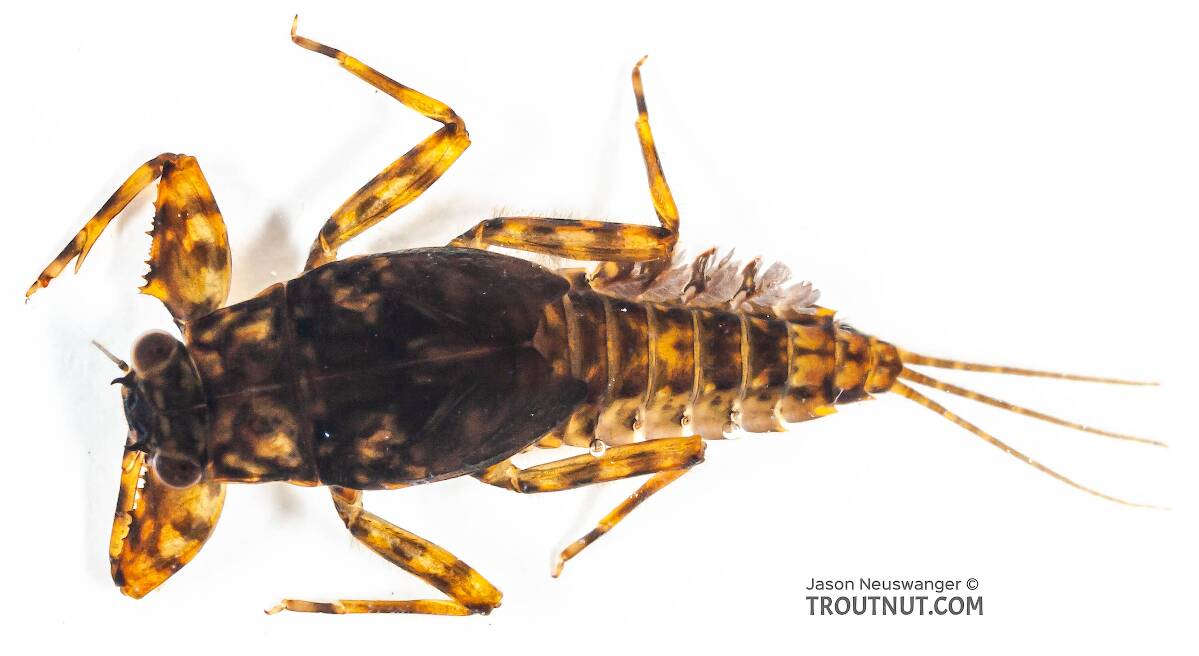 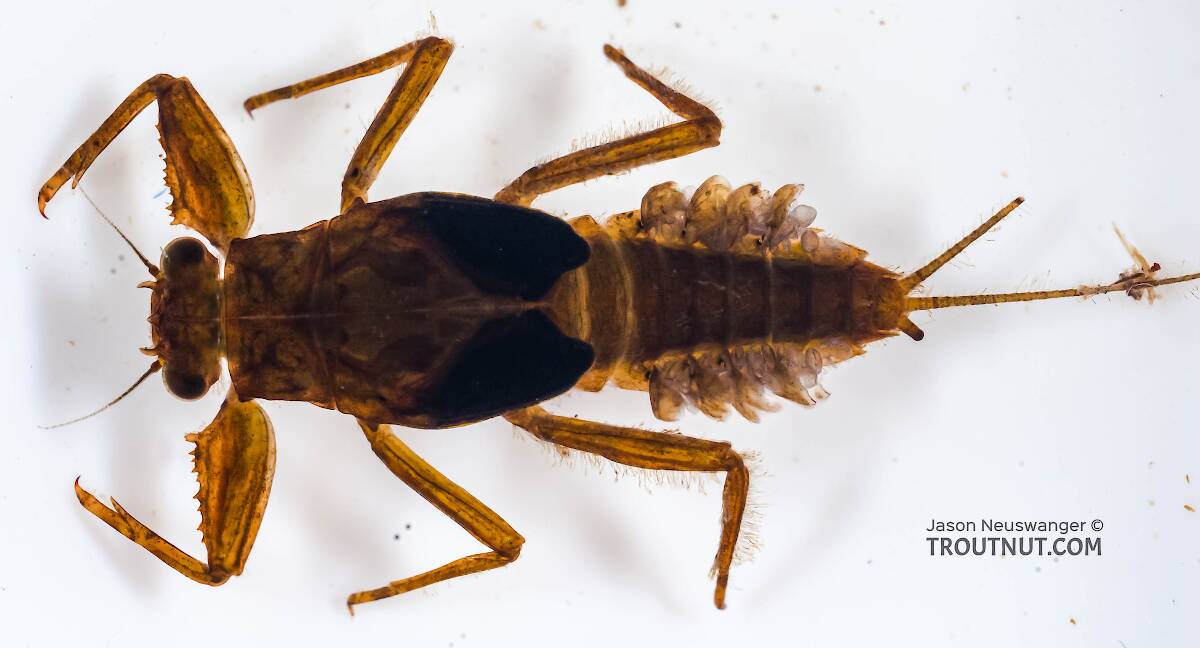 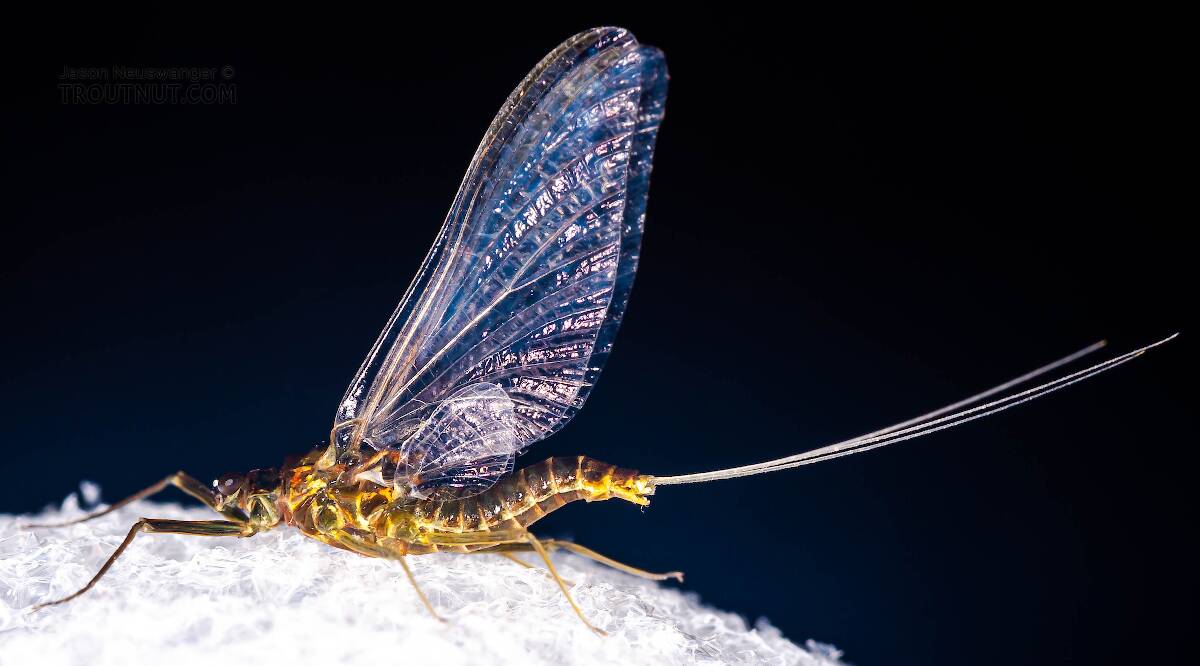 Drunella cornuta on the Brodhead at Stroudsburg PA
11 replies
Posted by Reify on Apr 21, 2014
Last reply on Apr 24, 2014 by Brookyman
4/21/14 - Fished the Brodhead today at the last park before last bridge on PA 191 - downstream of huge riffle section so is a great tretch for this species. I didn't get there until around 1:00 PM, took a nap and started fishing at 2:00 and there were still cornuta coming off sparsely but steadliy - until 3:30 PM. Sparse rises, but I was entertained. Is that normal or could it be because the water is unusually cold this year. Are the males and females of the same size or is one larger - and of slightly more pale coloration at take-off from surface? It almost looked to me to be two different flies, but I'm sure they weren't.
Reply