See the comments for an interesting discussion of the identification of this dun. 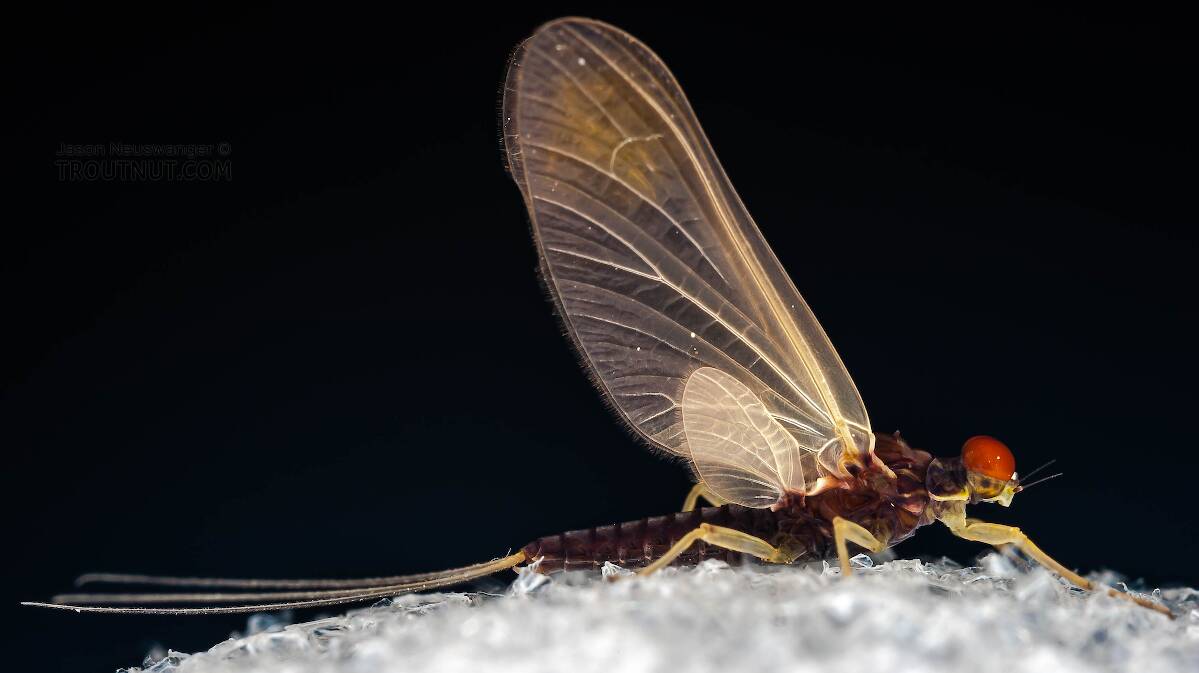 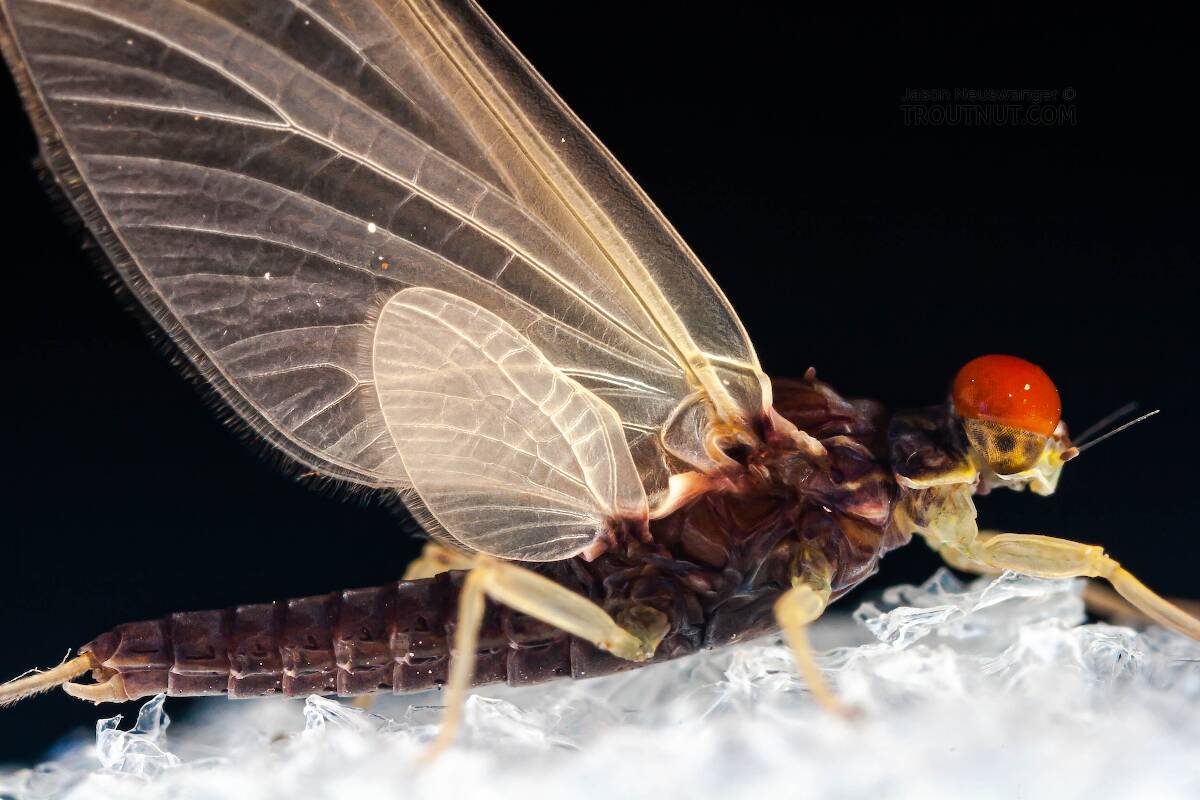 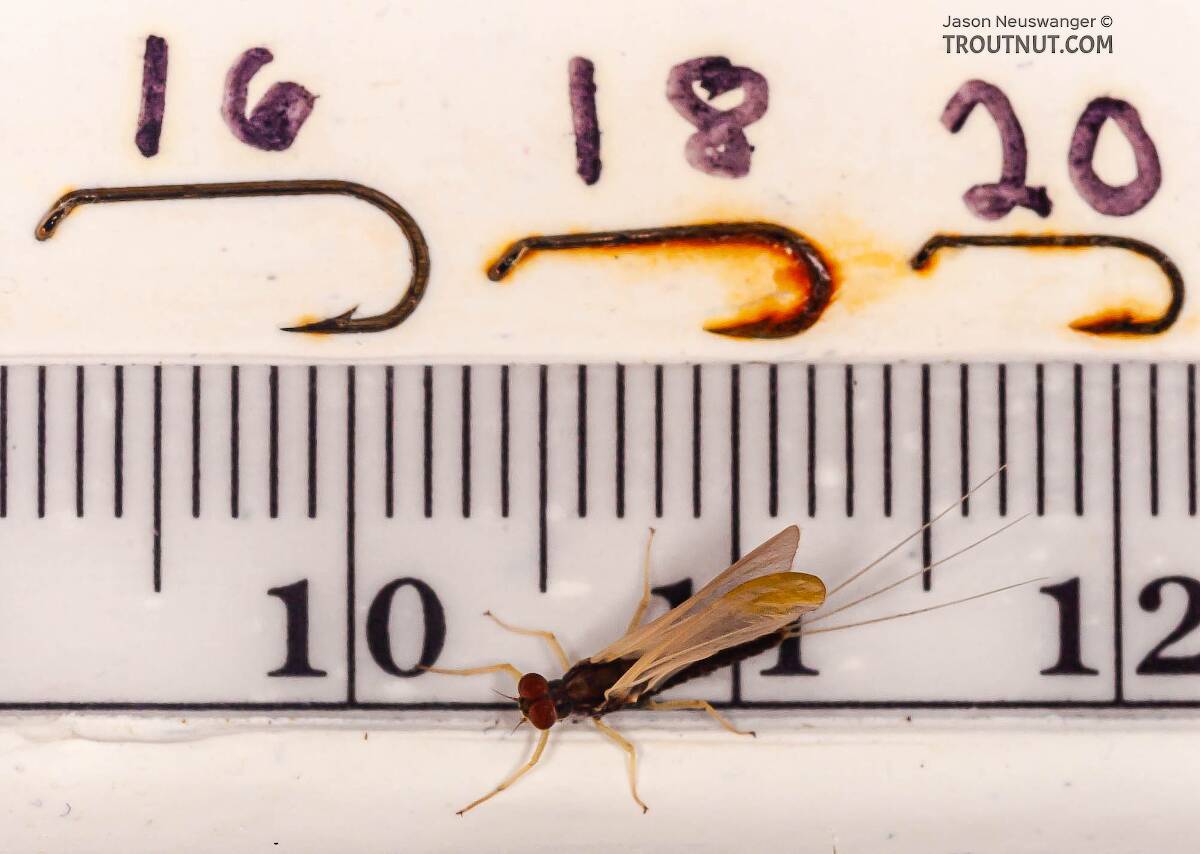 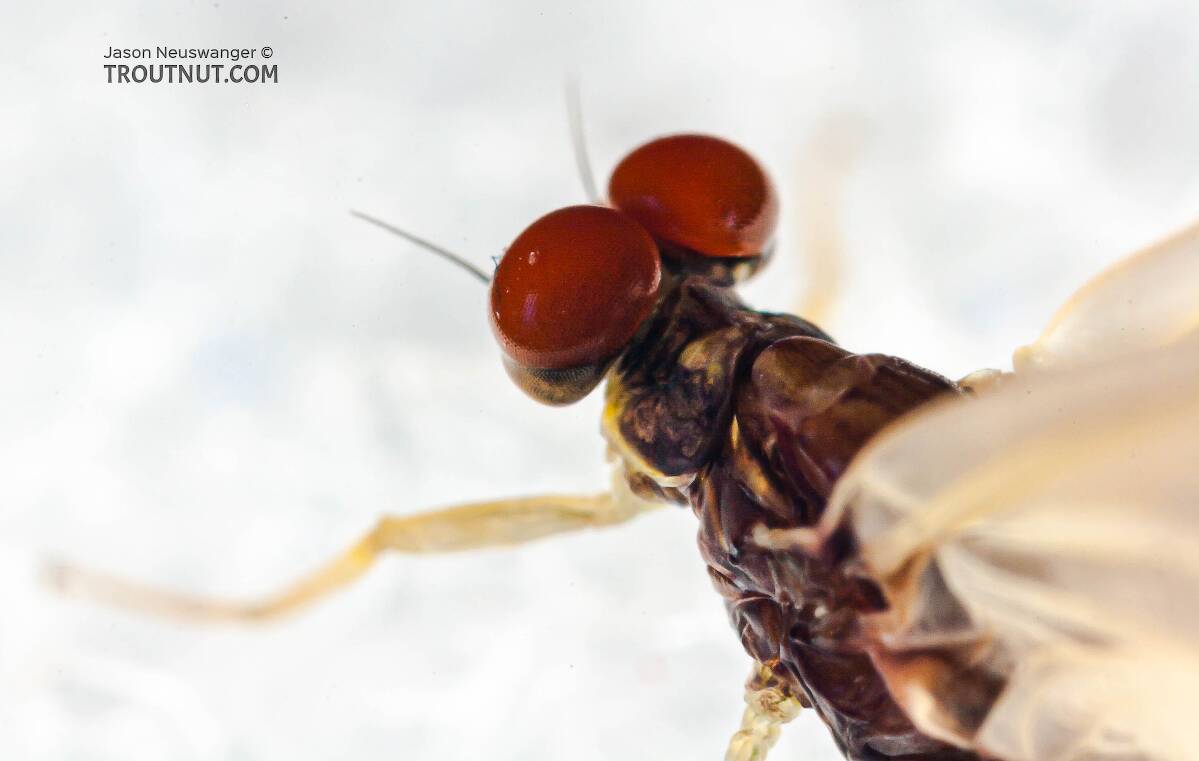 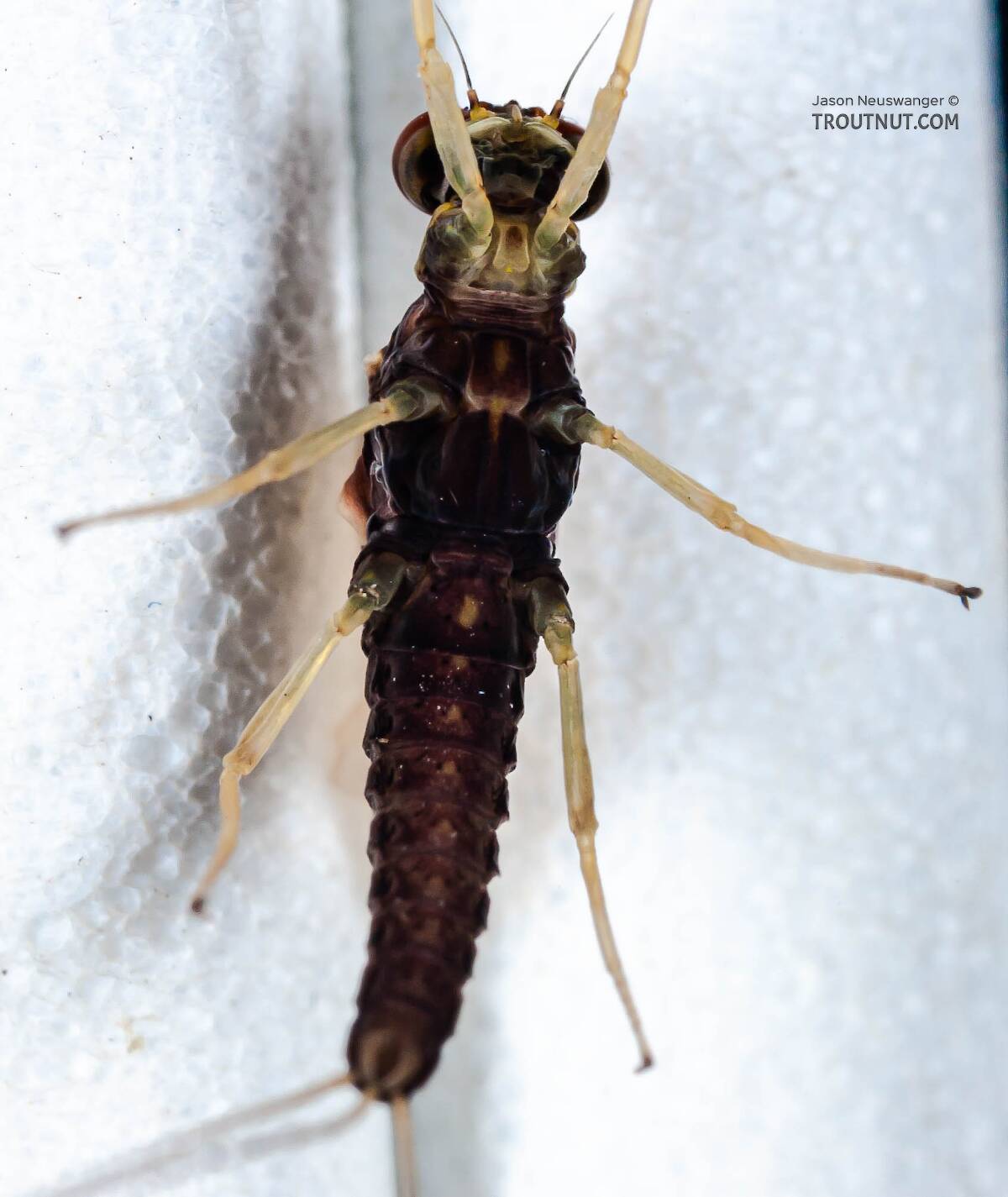 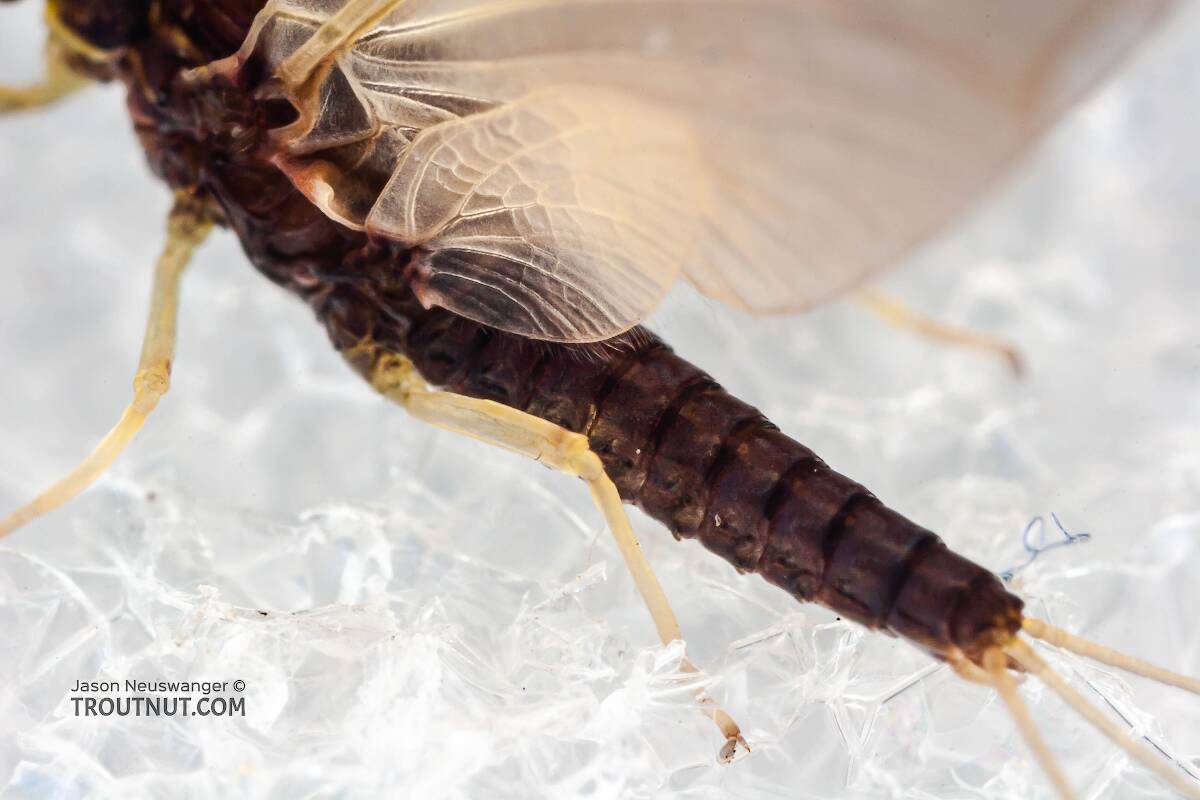 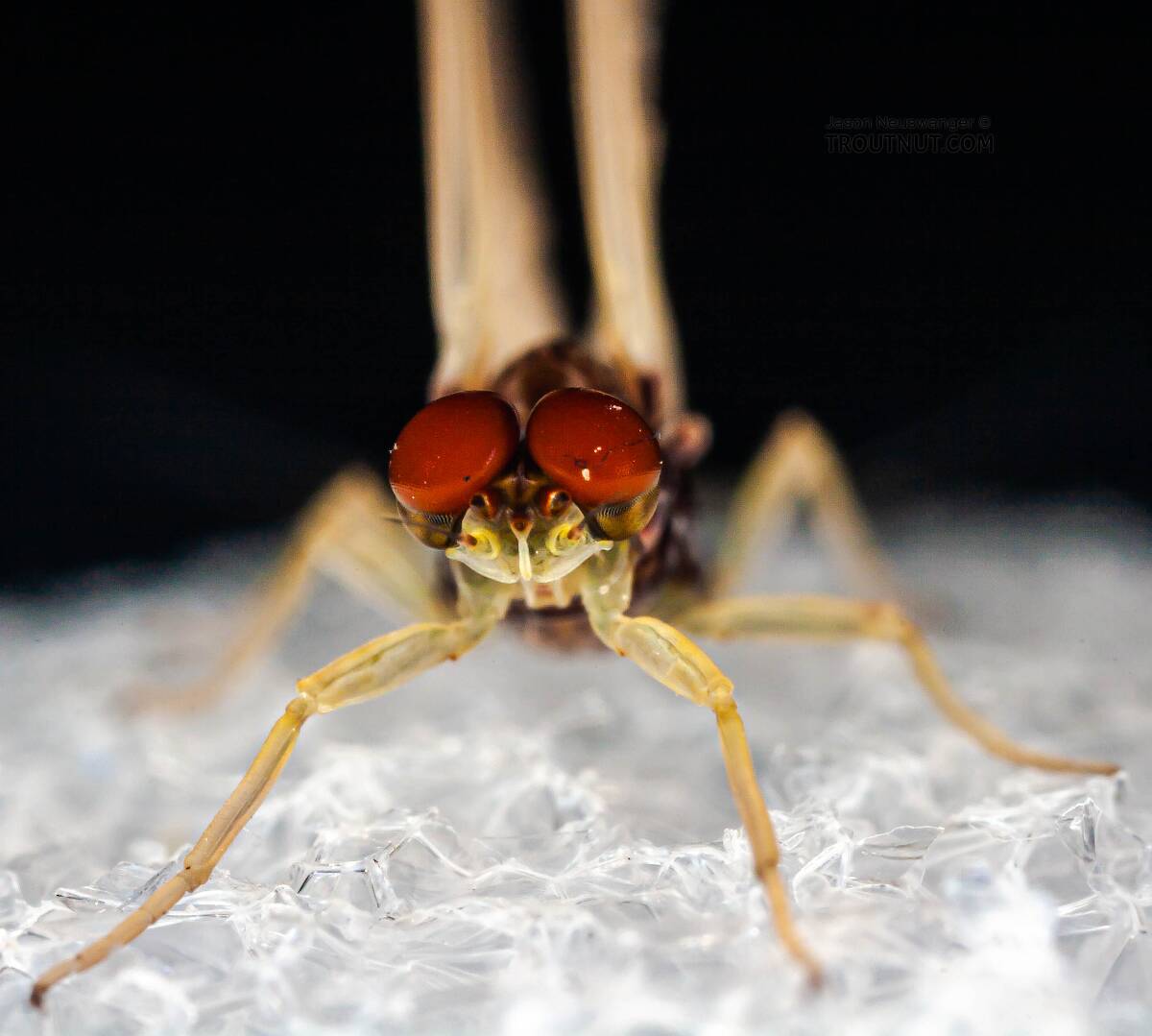 This mayfly was collected from the West Branch of the Delaware River in New York on June 1st, 2007 and added to Troutnut.com by Troutnut on June 4th, 2007.

Will the real Ephemerella needhami please stand up?
17 replies
Posted by GONZO on Jul 30, 2011
Last reply on Feb 26, 2016 by Martinlf
Please forgive the trite and dated "To Tell the Truth" title, but recent conversation and speculation about E. needhami subs is scattered through another thread ("Taxonomy and DNA"), so I thought I'd start this thread in an attempt to consolidate some of that conversation. The "E. needhami/Chocolate Dun" of angling lit. and popular hatch charts can be very different from the E. needhami described in the scientific literature. I'm convinced that it is often confused with Eurylophella spp. or Teloganopsis deficiens (formerly Serratella deficiens) partly because of questionable descriptions of the "blackish" wings of the duns and partly because the other genus and species are not well known to most anglers (even though they are commonly encountered on many eastern trout streams).

Your Ephemerella X looks an awful lot like this guy, who I formerly had placed in a couple different species but have put with Ephemerella needhami now after Gonzo made a convincing case for it. I'm guessing the X is needhami, at least for the specimen you pictured. The one I photographed on the Delaware was a small 16 or large 18, but that's within the range of variation for a single species at different places/times.

Just as a point of clarification, Jason and I have had recent discussions about this species, and I did (recently) post about the misidentification of several subs and adults (Eurylophella spp.) that were previously included on the needhami pages. However, it was Dr. David Funk's confident identification of the above specimen that seemed to seal its placement. I believe he is correct.

Jason, that sure looks like it. But... I thought needhami were very dark, with blackish wings -similar to S. deficiens. That's as I remember it. Could well be wrong.

That's a pretty common (mis?)conception, Paul, and I believe it can probably be traced to Caucci and Nastasi's Hatches (1975). Although McDunnough's 1931 (re)description of this species described the needhami subs as having "very pale smoky unicolorous wings," C&N's Hatches described them as "dark grey almost black." I'm convinced that the latter description is based on a misidentification because C&N's color photo, captioned "Ephemerella needhami, male dun," appears to be a Eurylophella dun. (It has the telltale long 9th abdominal segment.)

Though your photo could very well be needhami, it looks like it could also be an eastern excrucians. Do you remember Gonzo's rationale? I looked for it on the hatch page but only found from my quick scan a conversation about another family. Gonzo didn't participate as far as I could tell.

Just to be clear, Kurt, I did participate, to the point of initiating a previous thread about this specimen, but my participation was limited to expressing my doubts about its original placement in Serratella.

PS I started to post yesterday that I thought your bug was needhami and pulled the post after a half hour or so...I had sent an email up to Gates' about a so-called "Dark Henrickson they had listed on their Hatch Chart...They wrote me back it was the web masters typo...I started to doubt myself and yanked the post. I was having doubts due to its size...

Thanks, Spence. That explains the mystery of the disappearing posts. :)

I'm not making an argument that Paul's mystery "Ephemerella X" dun is E. needhami. I just wanted to point out that the species is often subject to misidentification based on (some angling) descriptions that are probably attributable to other species. Only a few years after his original 1925 description, McDunnough (1931) said this:


Considerable confusion has existed regarding this species; it has been misidentified as excrucians Wlsh. by Needham and, to complicate matters, its nymph has been misassociated with bispina Needh. which belongs in another section of the genus.

confusing local names+
4 replies
Posted by Gutcutter on Dec 22, 2009
Last reply on Dec 22, 2009 by Oldredbarn
i think that i fish a fairly good hatch of these on the little j near the town of spruce creek. the hatch is pretty good in the late morning during the early summer. i catch it every year. i always thought they were "blue quills" onacounta their coloration and size. in any event, the fish eat my blueuill emergers and spinners pretty well. is there a major difference between these and paralepts? hatching behavior or any other thoughts?
Reply
Stumped!
8 replies
Posted by GONZO on Jul 19, 2007
Last reply on Dec 5, 2008 by Beardius
Jason,

Somehow, I don't think this is Serratella--it seems too large (especially for a male), and the "S" with which I'm familiar have very dark wings. I thought I'd call attention to it in the hope that someone might be able to offer some insight and, perhaps, clear up the mystery.
Reply