This taxon prefers cold water and does not flourish where water temperatures exceed 60 degrees. As with the slightly larger Drunella coloradensis, this species prefers cold tailwaters, high elevation headwaters and spring creeks.

Time of year : August and September

This species is most prevalent near the Pacific Coast, but scattered local populations occur throughout the northern states of the West.

These spinner flights are too sparse to be important.

Most of these descriptions are direct quotes from the original scientific sources describing or updating the species, although there may be errors in copying them to this website. Such descriptions aren't always definitive, because species often turn out to be more variable than the original describers observed. In some cases only a single specimen was described. However, they are useful starting points.

Color light brown, but this is probably due to fading in the alcohol and fresh specimens may be considerably darker and show an abdominal pattern. Head with a pair of long, erect, pointed tubercles on vertex, about as long as distance separating them. Pronotum with a twin pair of tubercles on each side subdorsally, situated on posterior half of segment, the anterior one being twice as high as the posterior one, both pointed; a lateral pointed tubercle at same level as anterior subdorsal one and somewhat smaller than this.

Mesonotum with a small pair of rounded wart-like tubercles, situated subdorsally on anterior margin; laterad and slightly posterior to these on each side is a longer, sharply pointed tubercle, directed slightly backwards; in central area is a pair of long, pointed subdorsal tubercles, twice as large as the preceding pair, and also slightly slanting backwards, and there is a single median rounded wart-like prominence on the posterior portion, equivalent to the scutellum of the adult; in the latero-anterior angle is a small rounded wart, separated by a slight excision from a still smaller wart, placed directly behind it; somewhat dorsad of these is a slight raised ridge.

On abdomen dorsally segments 2-7 bear each a pair of sharply pointed, spine-like tubercles on the posterior margin; these are all practically equal in length and directed slightly backward; the two on segment II are closer together than those on the following segments and on segments 1V-VII the distance between the tubercles is slightly greater than their height. On segments VIII and IX the spine-like tubercles are enormously increased in size and fully four times the length of the preceding pairs; they are pointed and covered with long, scattered bristles, the pair on VIII faintly divergent apically, those on IX slightly smaller than on VIII, subparallel and rather more decumbent. Tails light brown in basal fourth, broadly ringed with darker brown in outer three-quarters. Lateral spine-like prolongations of abdominal segments III-VII increasing in size from front to rear; lateral margin of VII slightly convex, of VIII and IX distinctly sinuate, the prolongations on these last two segments being subequal and somewhat longer than on VII. Ventrally on abdomen are sub-lateral rows of dark brown dashes, one dash to each segment. Legs pale brown, the femora of two posterior pairs showing traces of two dark transverse bands on outer sides; hind tibia equal in length to femur and trochanter combined. 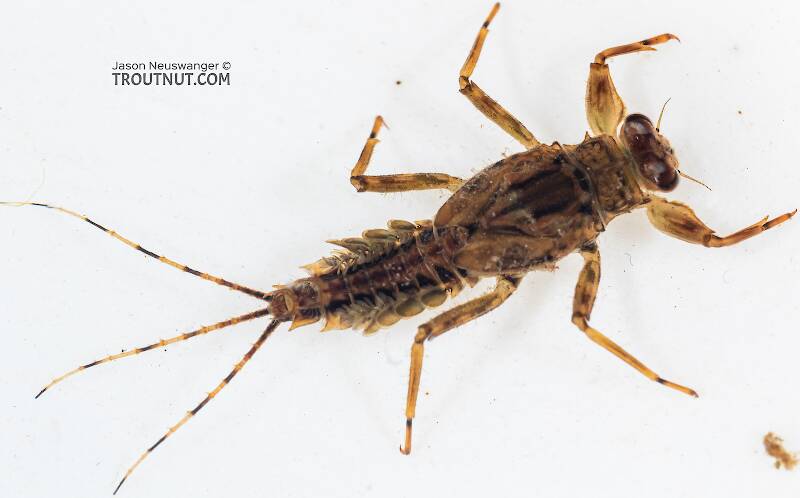 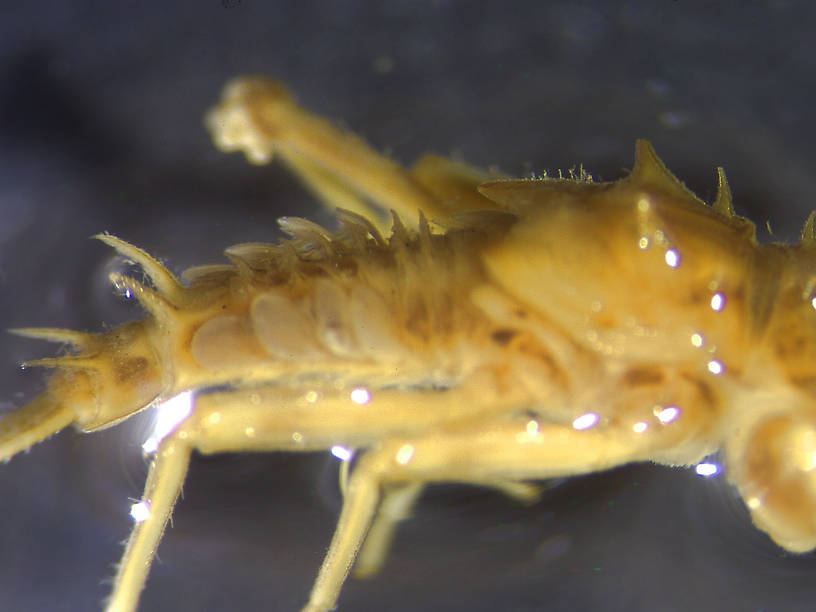 This species resembles Drunella grandis but the spines tell the story.
Collected December 19, 2009 from 6 mile Creek in Montana
Added by Bnewell on June 26, 2011 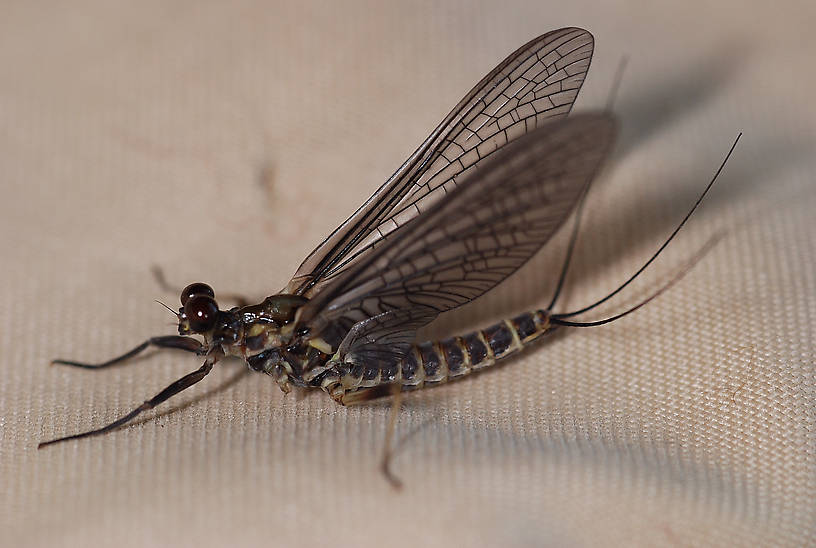 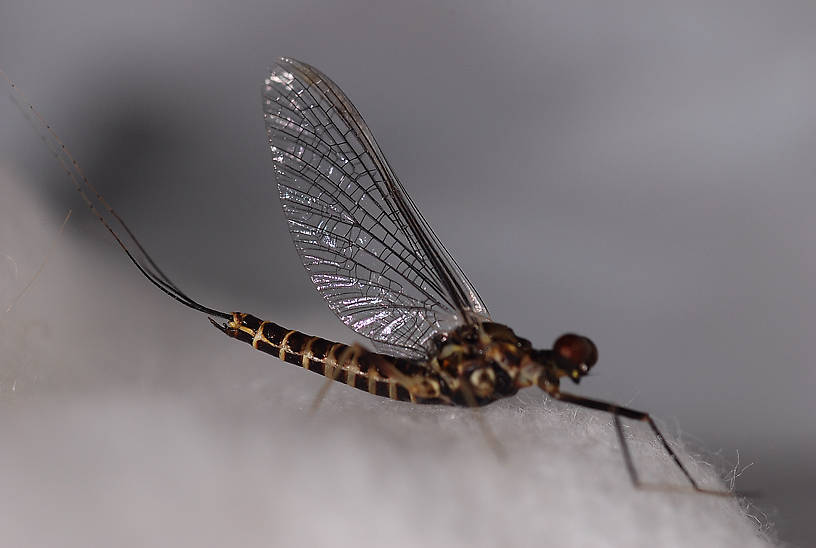