This stonefly was collected from the Neversink River (above reservoir) in New York on May 6th, 2007 and added to Troutnut.com by Troutnut on May 10th, 2007. 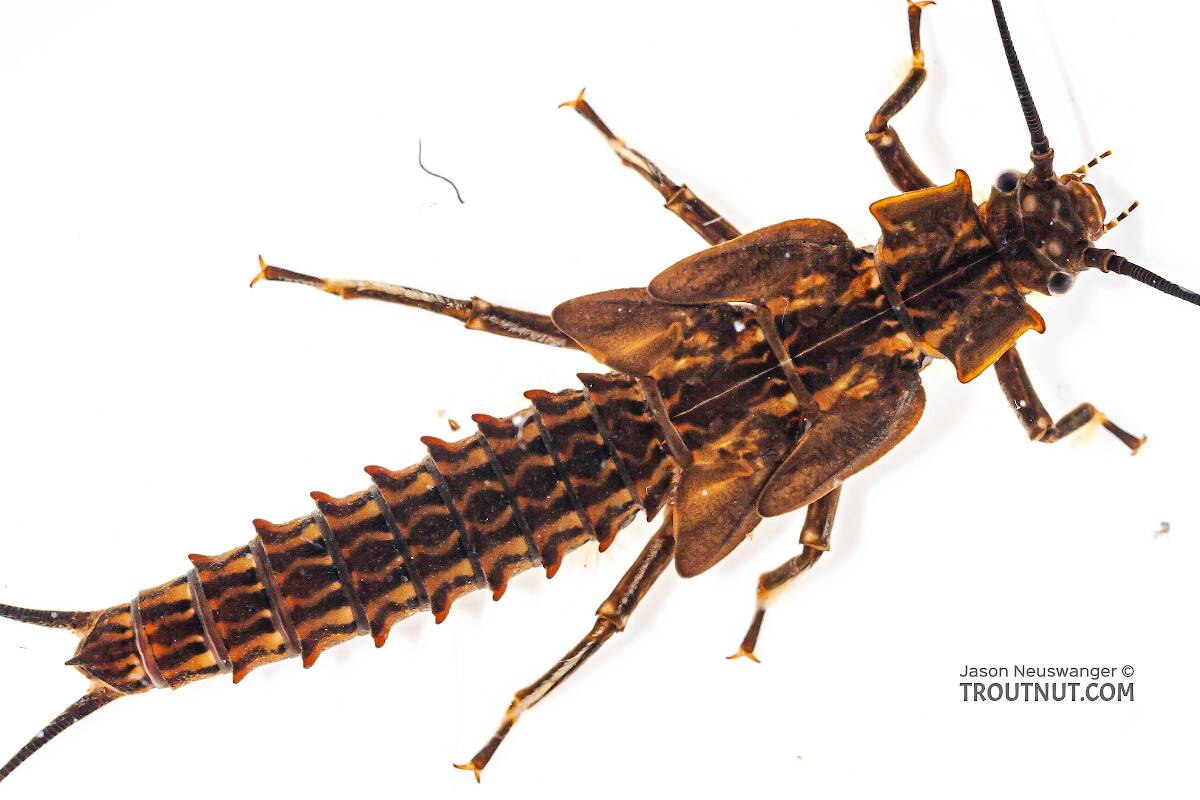 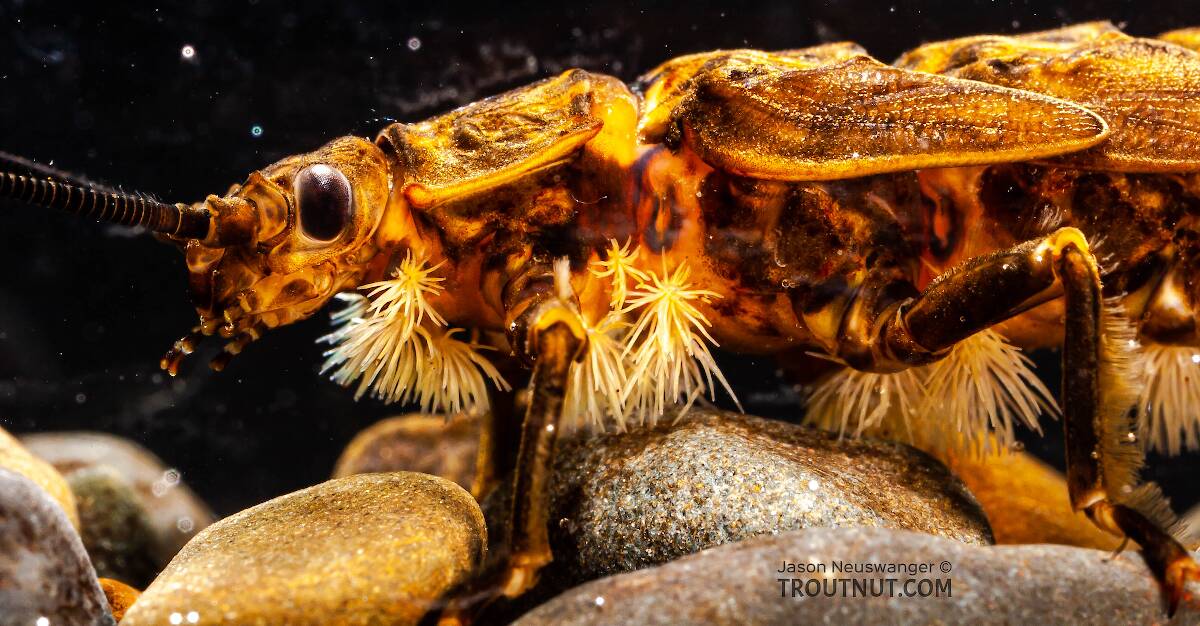 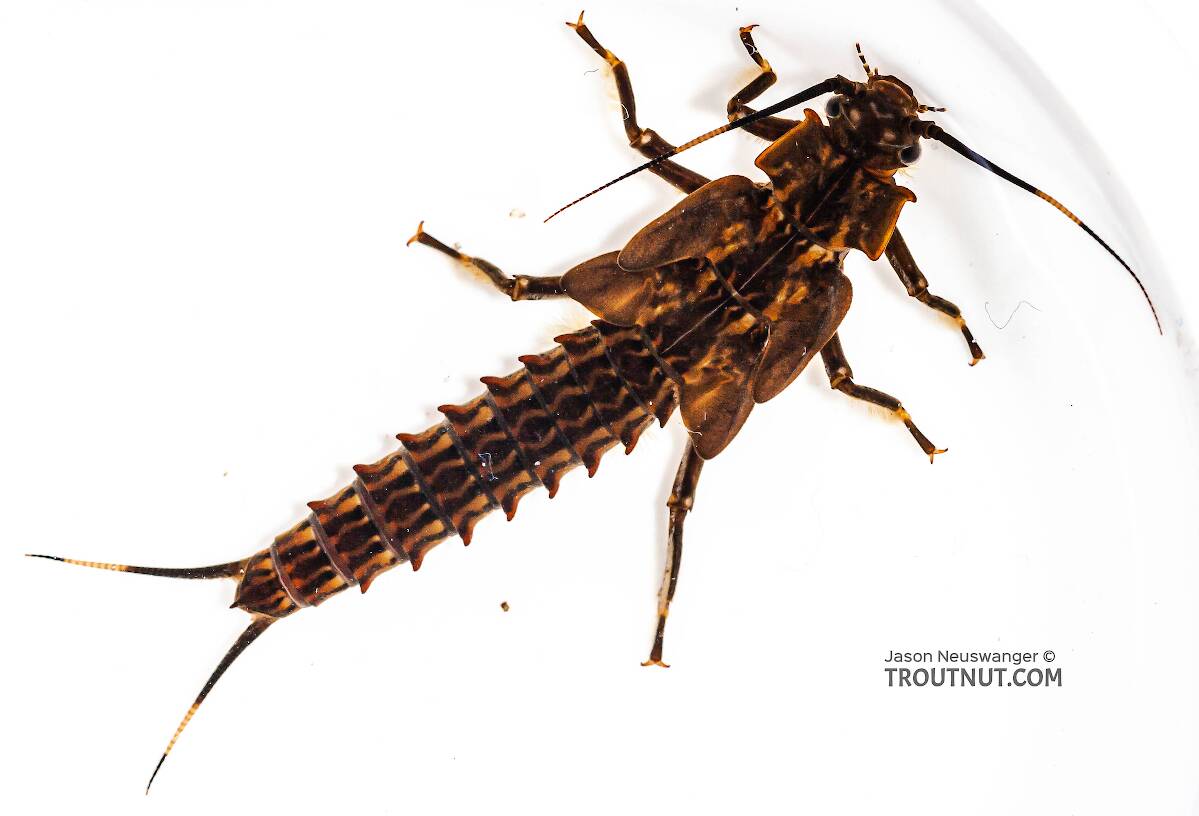 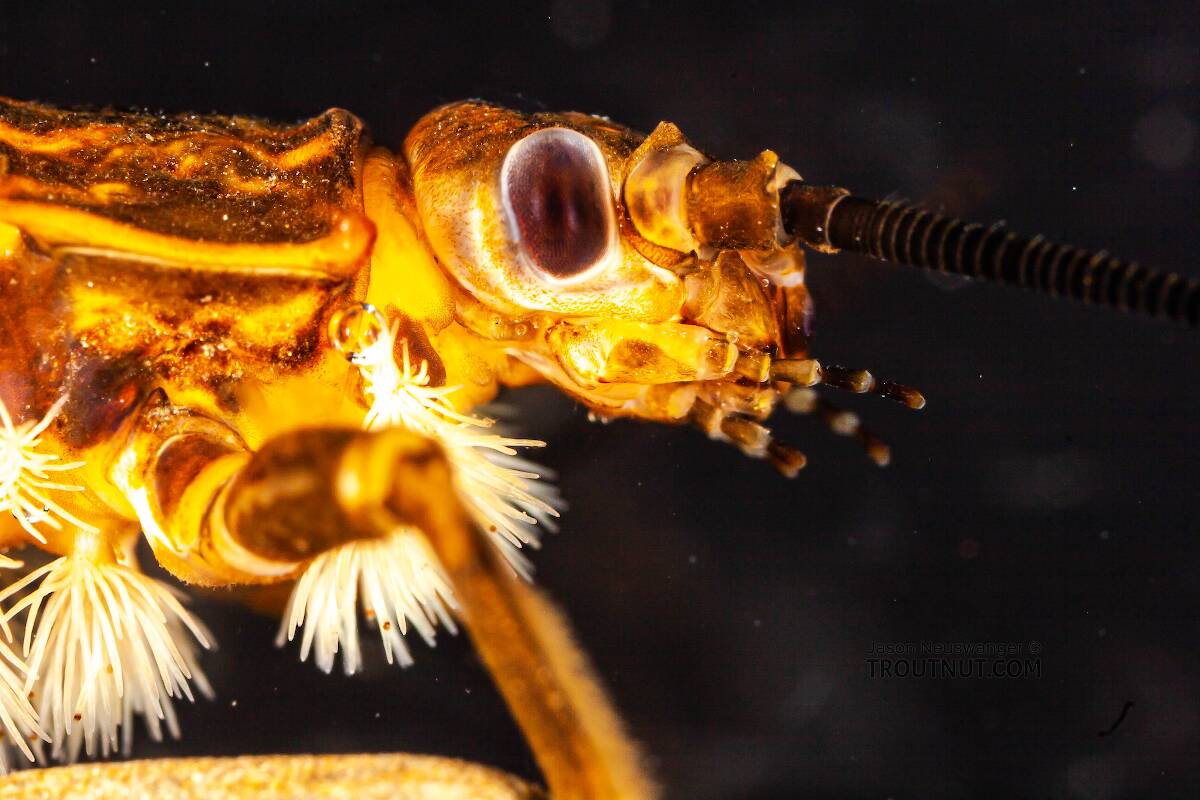 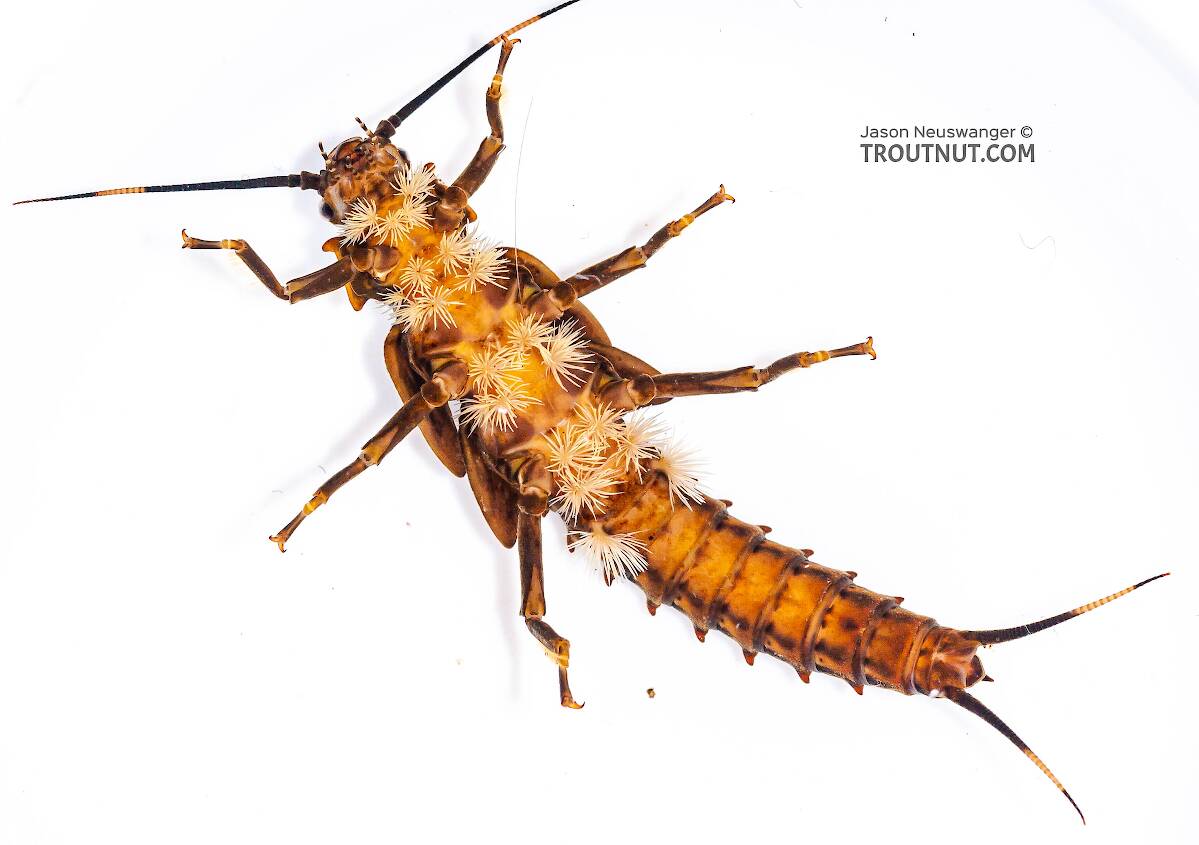 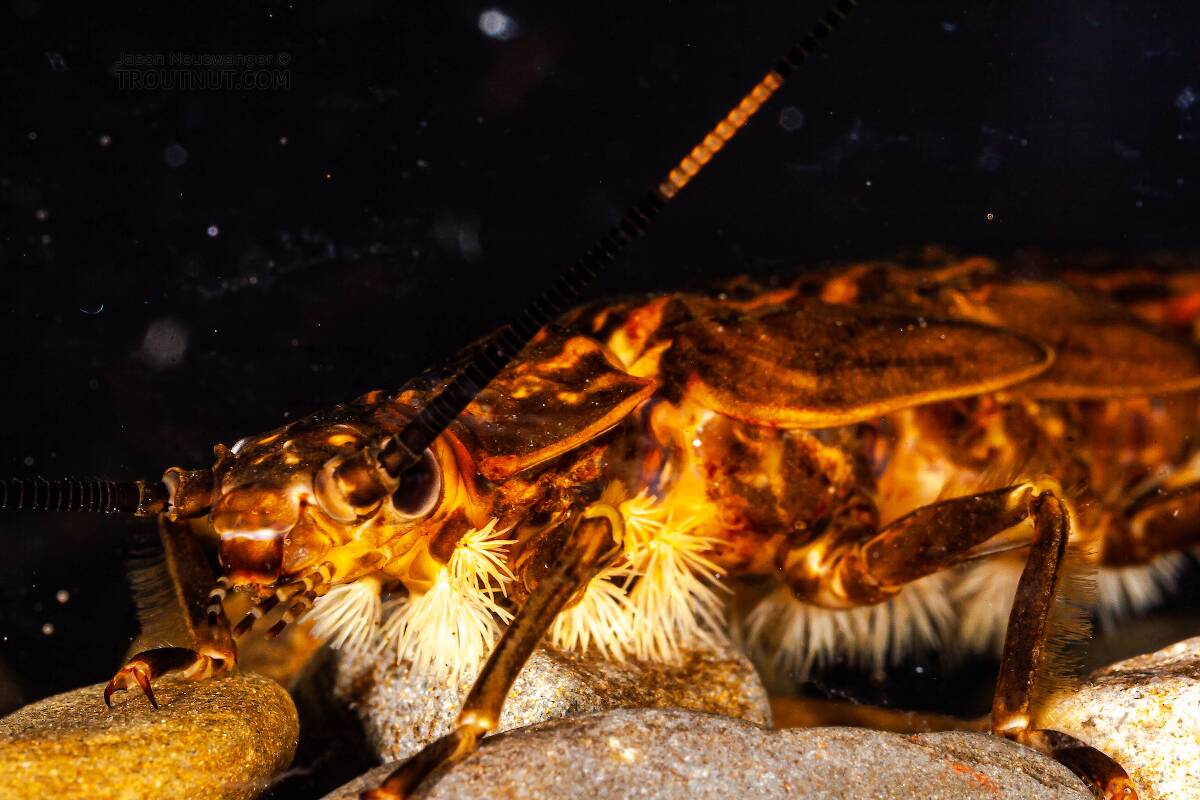 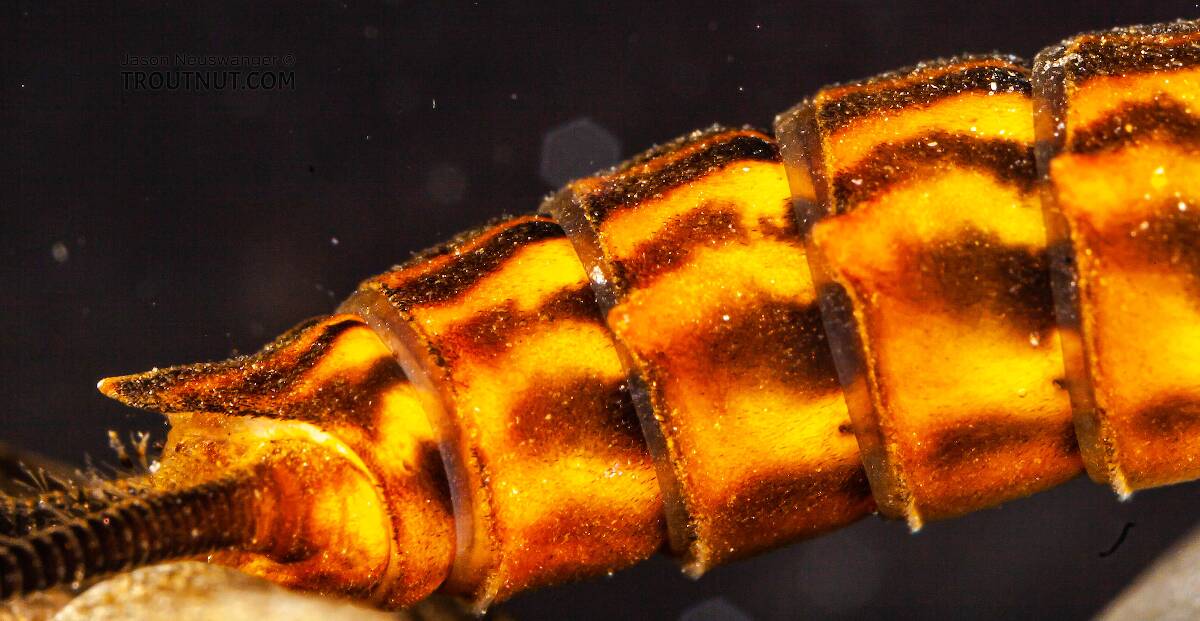 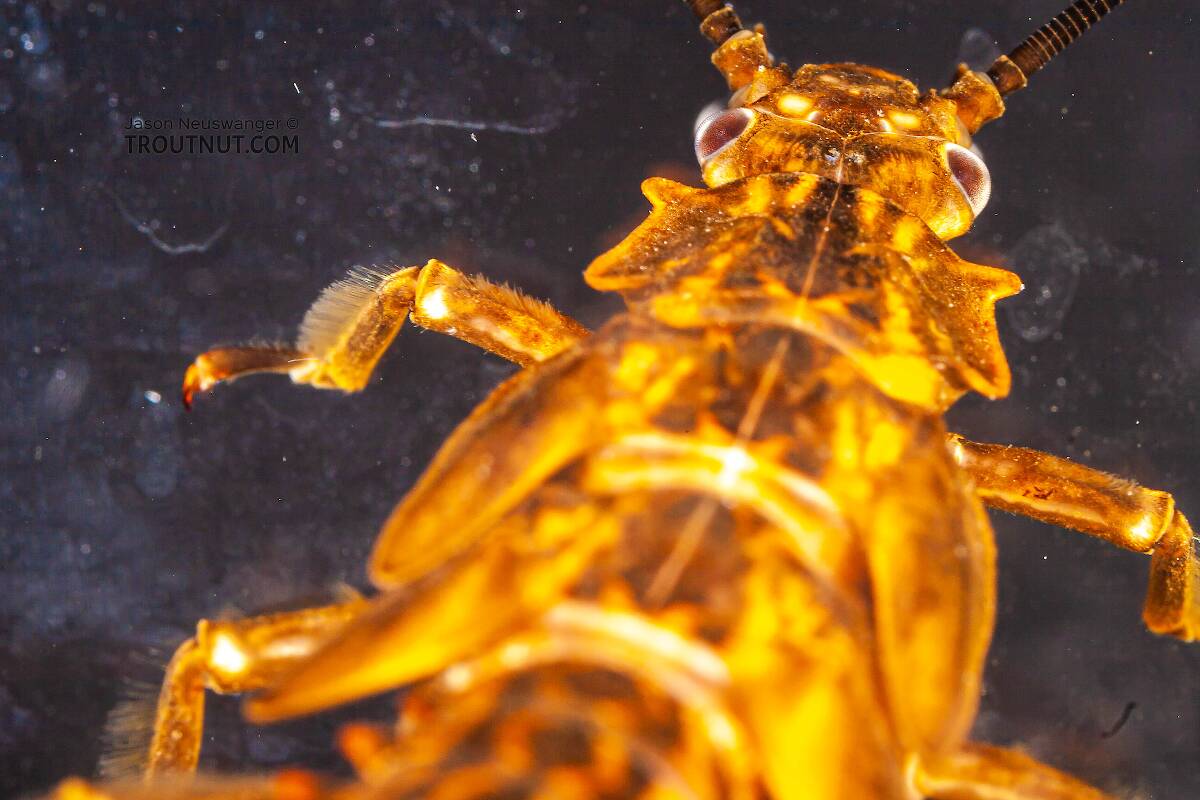 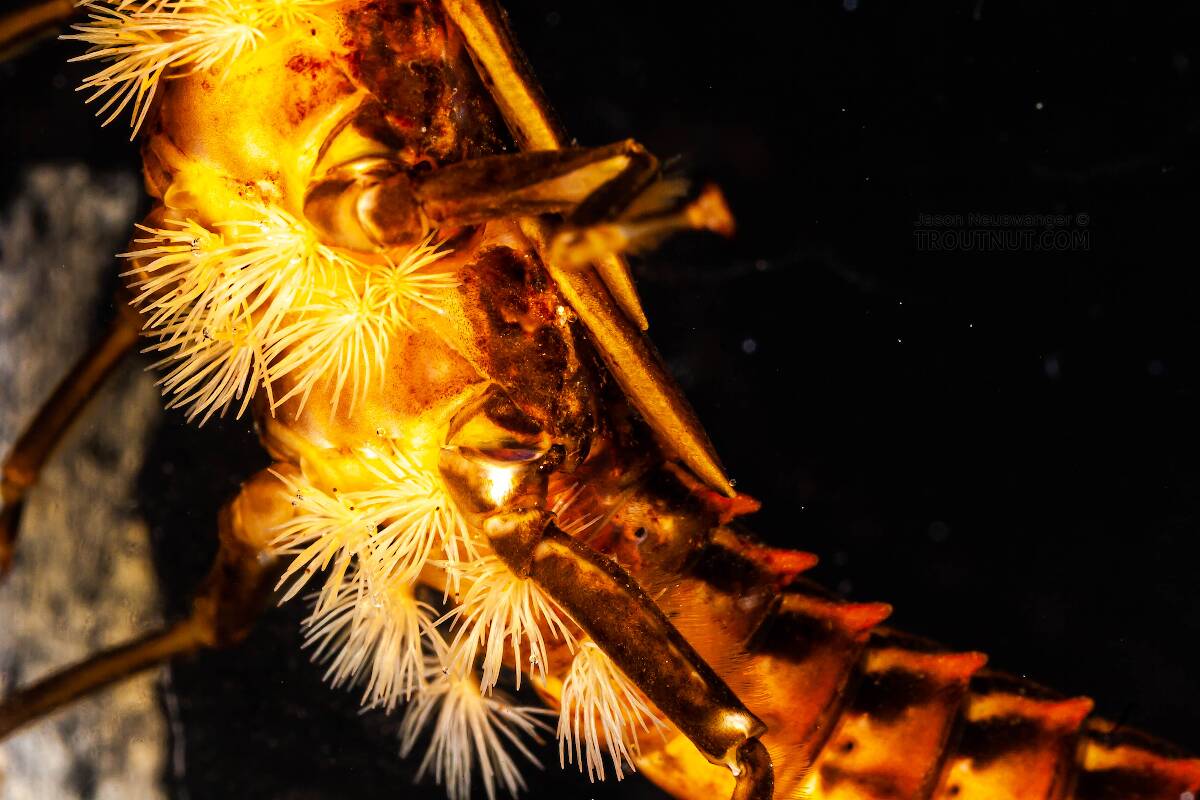 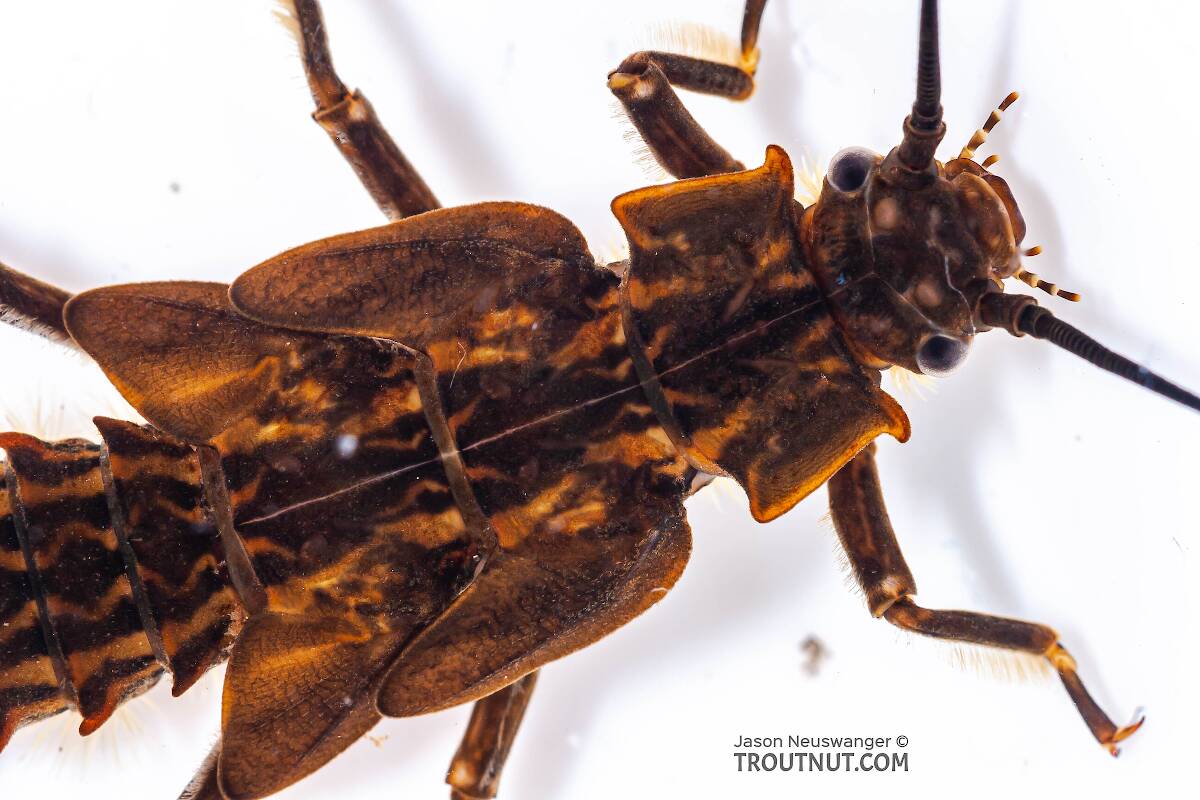 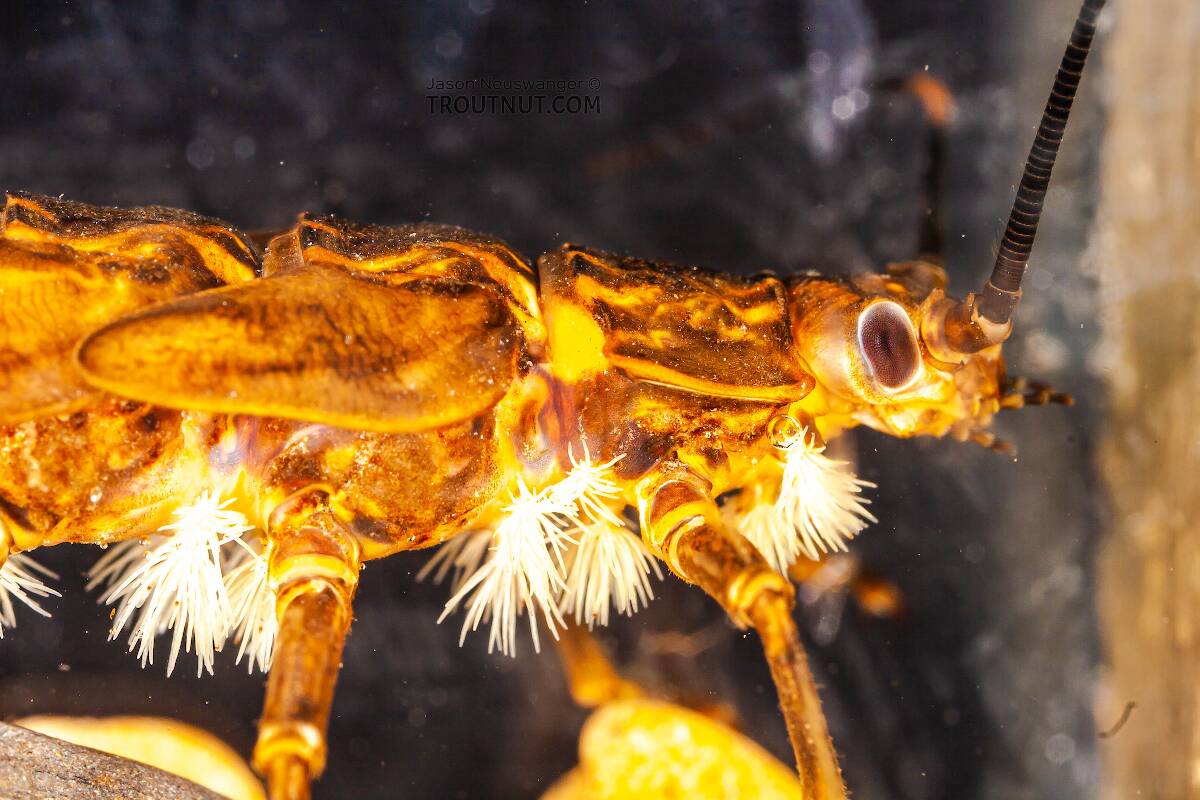 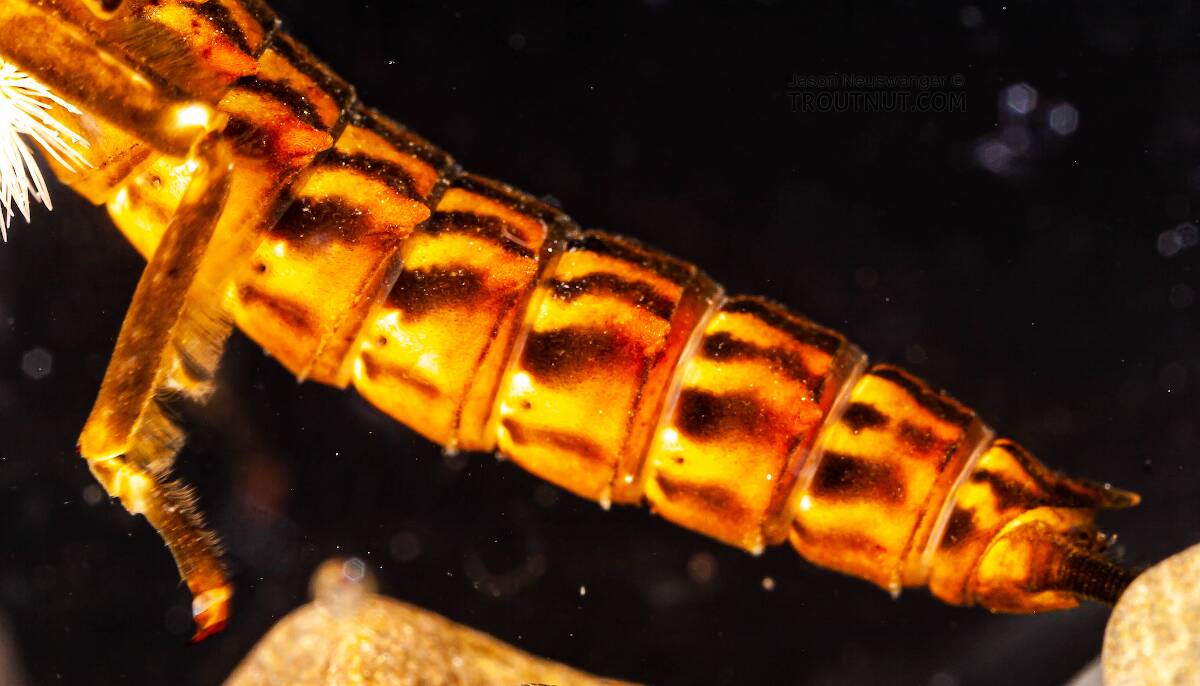 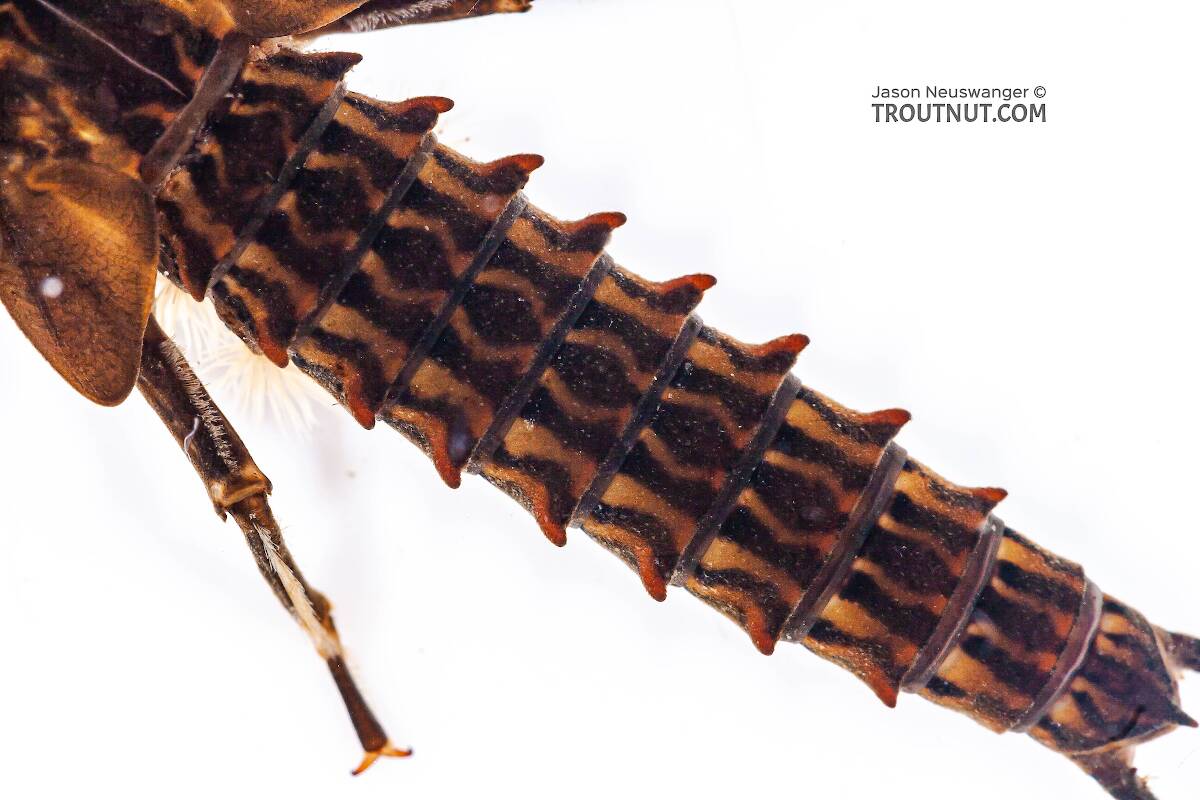 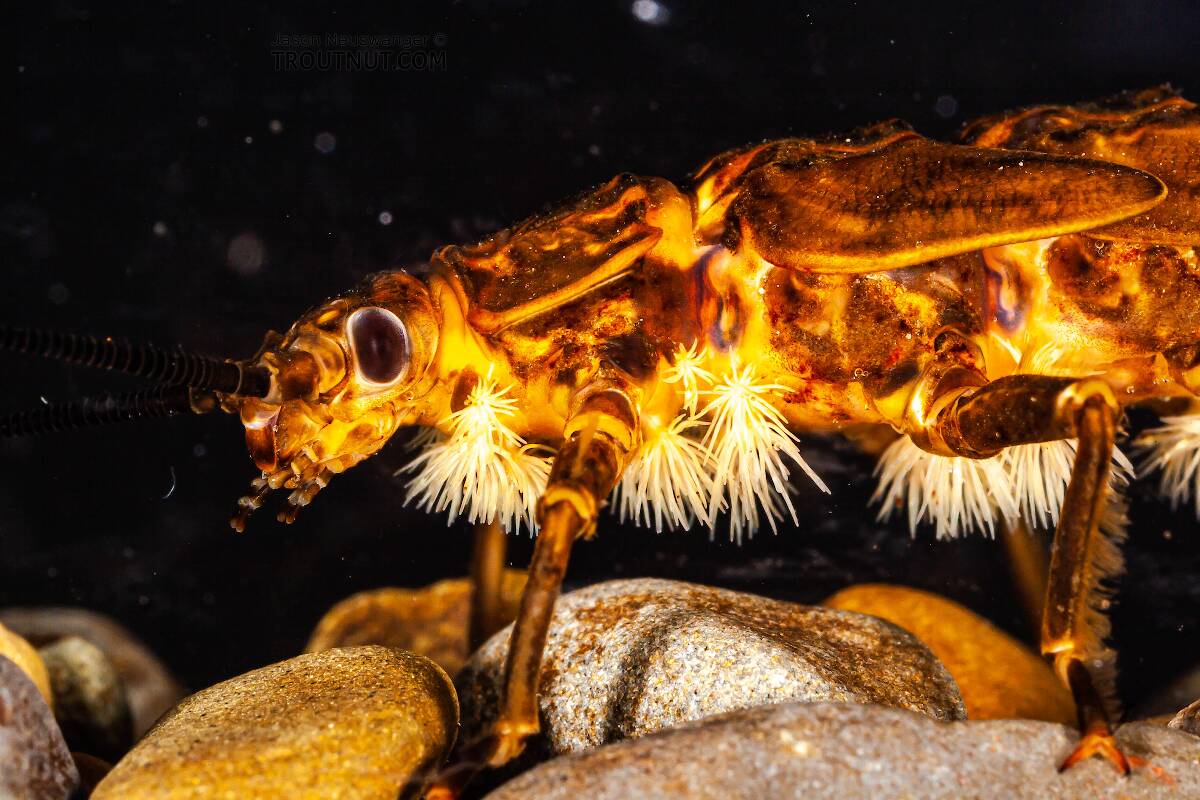 Discussions of this Nymph

proteus, biloba, and comstocki
1 replies
Posted by Beardius on Aug 1, 2008
Last reply on Oct 28, 2008 by GONZO
Pteronarcys proteus has abdominal knobs but has a squared off pronotum (no projection of knob). It differs from dorsata in having knobs on the abdominal segments. There is a picture of a young Pteronarcys proteus nymph here: http://www.discoverlife.org/mp/20q?search=Pteronarcys+proteus

Pteronarcys comstocki has pronotal projections and a spine-like projection on the anterior mesonotal wingpad. I only found them in one stream (trib of Kettle Creek in central PA) of the dozens I've collected. I have not collected them in MD, but they are reported from WV and PA. There is a photo of an immature nymph here: http://www.discoverlife.org/mp/20o?search=Pteronarcys+comstocki

Pteronarcys biloba has pronotal projections but no spines on the wingpads. P. biloba is common up north (NY, VT, NH, ME, etc.). The photo above is of P. biloba. Nice photo here: http://www.discoverlife.org/mp/20q?search=Pteronarcys+biloba

I never collected P. dorsata, so I figure it must be in larger or warmer rivers.
Reply

When I first looked at this specimen, my first instinct was to guess that it was biloba, especially coming from the upper Neversink. But, the more I compare it to the specimen I previously guessed as biloba, the more I see subtle differences. The pronotum is a different shape and the knobs or spines extend further along the abdomen. Perhaps these are variable traits or gender differences, but I'm starting to wonder about both IDs.

Of the Eastern (or transcontinental) species, I'm pretty familiar with dorsata and biloba, and I've seen a few specimens that I'm pretty sure are comstocki. These latter specimens had fearsome-looking long spines along the abdomen and I guessed at the comstocki ID mostly because its nickname is the "spiny salmonfly."

I've seen cladistic diagrams that indicate that scotti is considered to be the closest relative of biloba, but it seems to have a more southerly distribution. (That diagram also seemed to explain why Allonarcys is no longer favored as a separate genus for the Pteronarcys species with spines or knobs.)

I'm not aware of the species descriptions of proteus or pictetii. Until I saw a survey of the Delaware River basin, I assumed that the large unknobbed Pteronarcys that I had seen on the main branch were dorsata (and that's what Ernie S. said they were), but the survey lists only biloba, comstocki, and proteus.

Could someone provide some characters for these other species? It would help to resolve my current confusion and would be greatly appreciated.
Reply

Start a Discussion of this Nymph: