This dun molted most of the way into a spinner (though the wings got stuck) the evening after I photographed it, so I took some more photos of the spinner.

I found a female nearby, probably of the same species.

This mayfly was collected from Mystery Creek #43 in New York on September 19th, 2006 and added to Troutnut.com by Troutnut on October 4th, 2006. 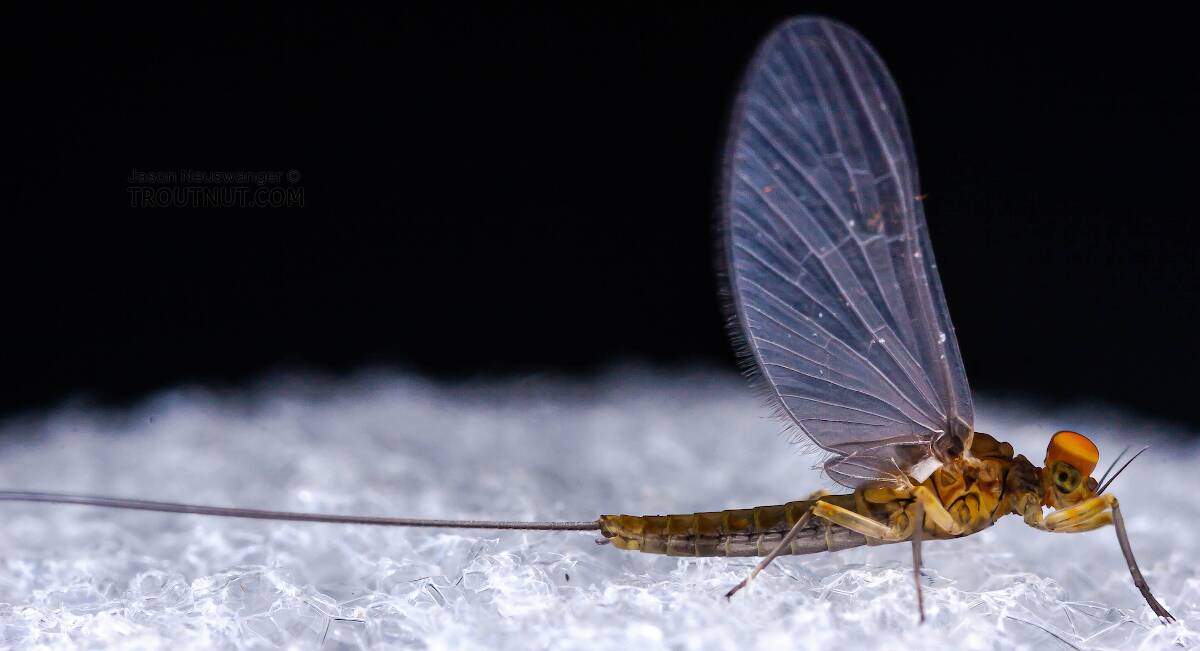 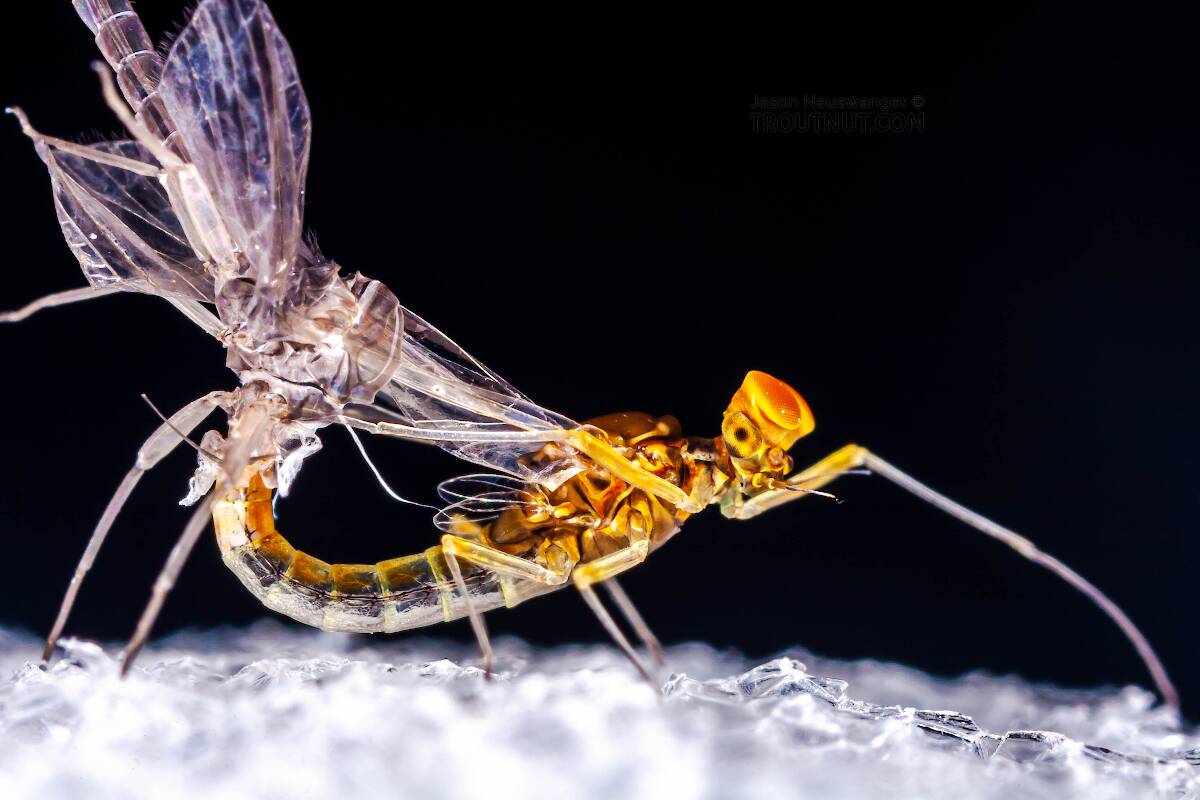 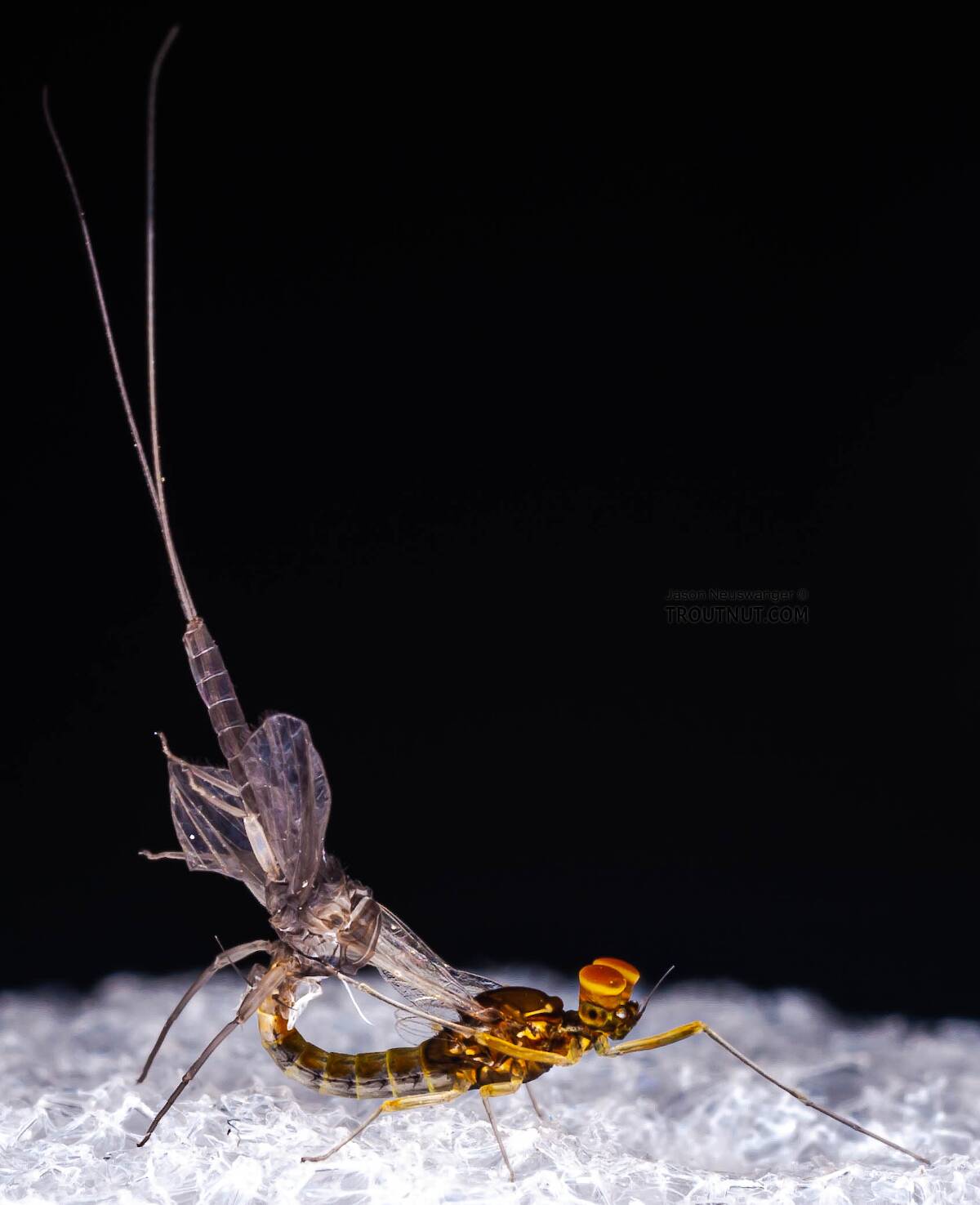 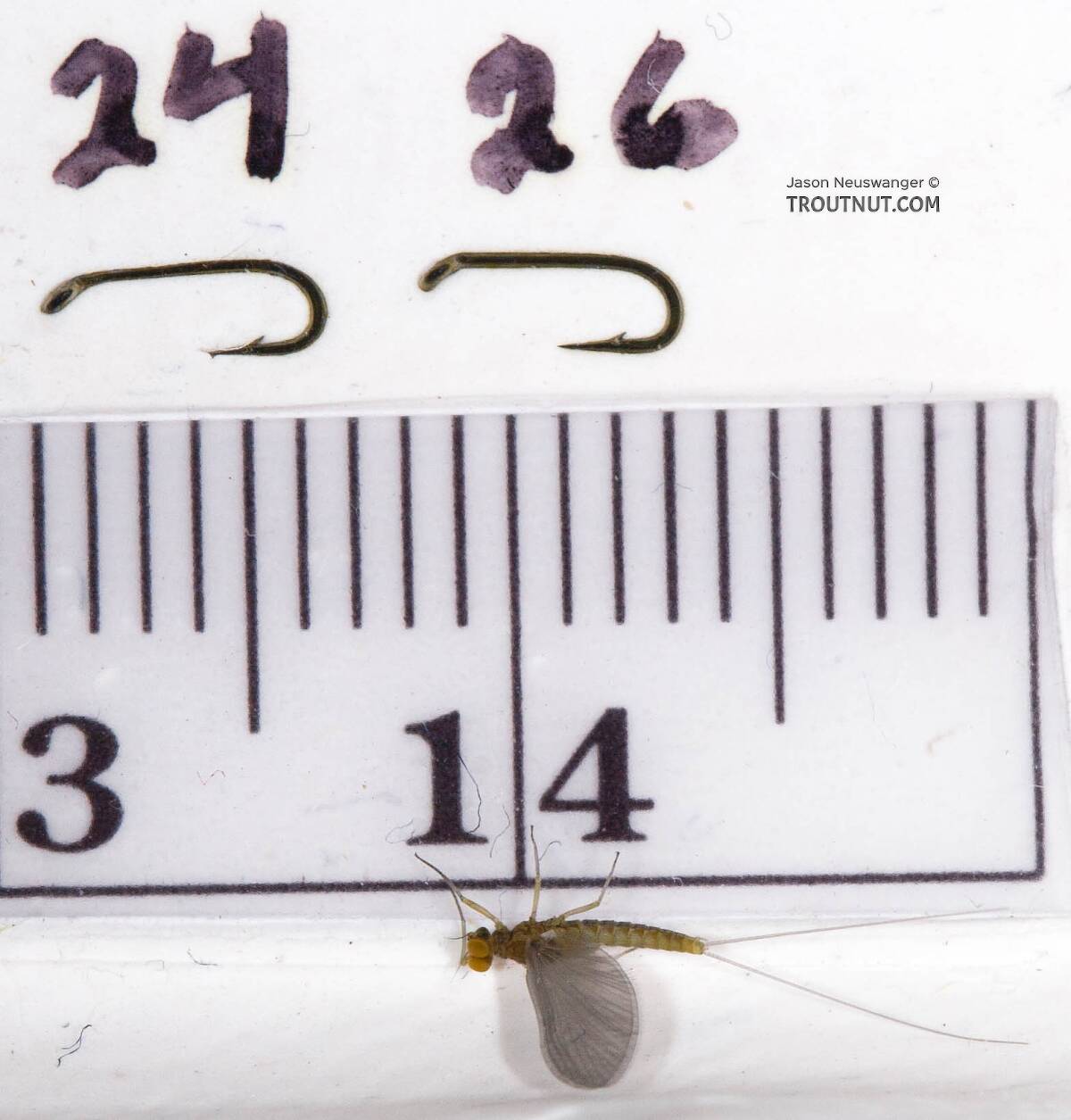 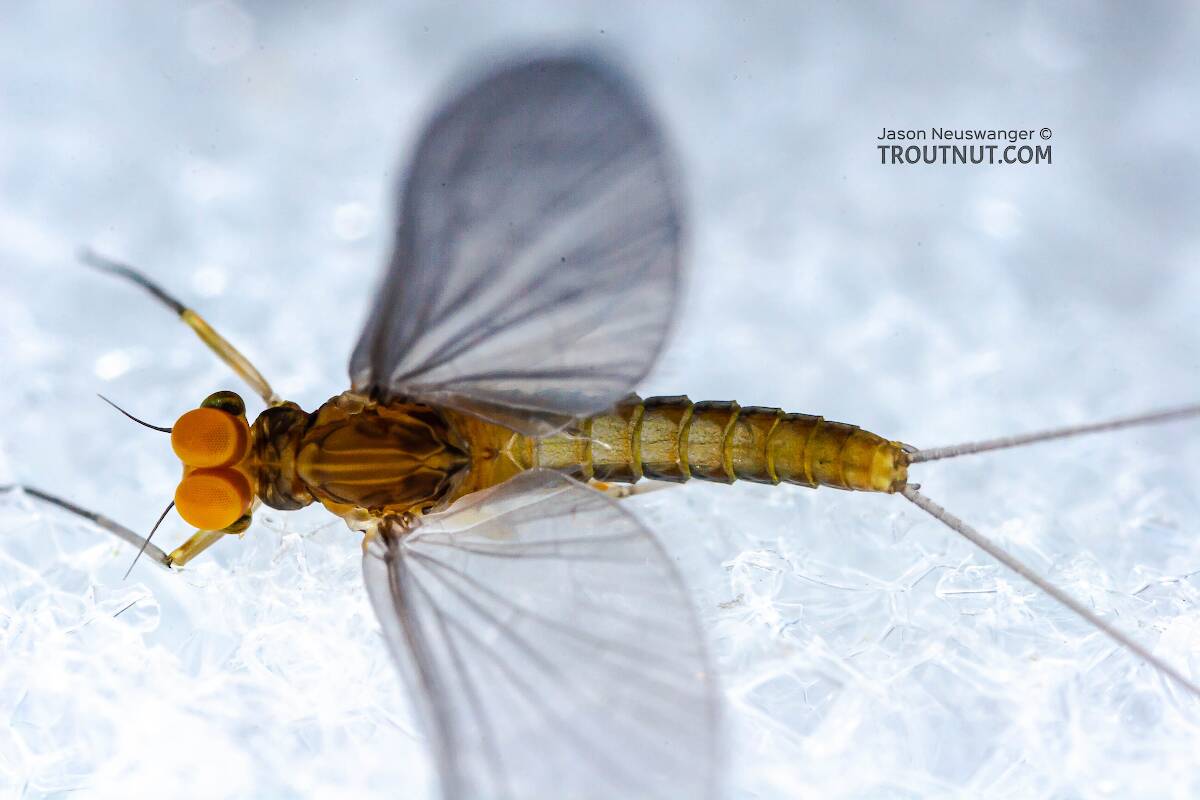 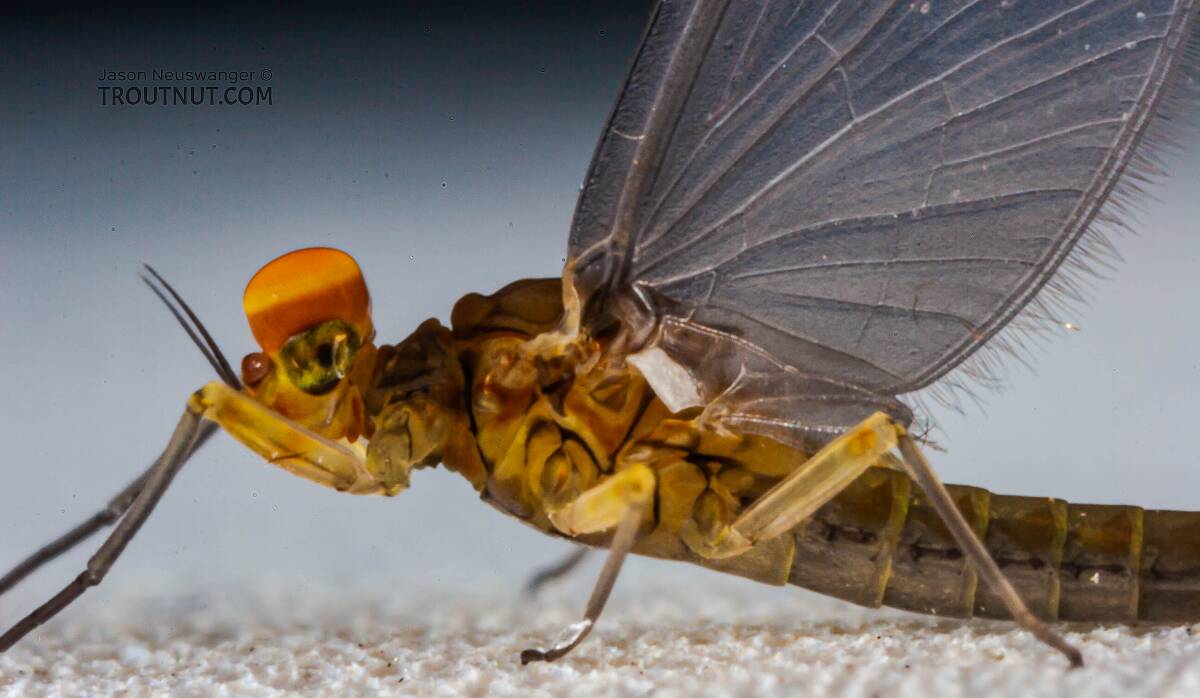 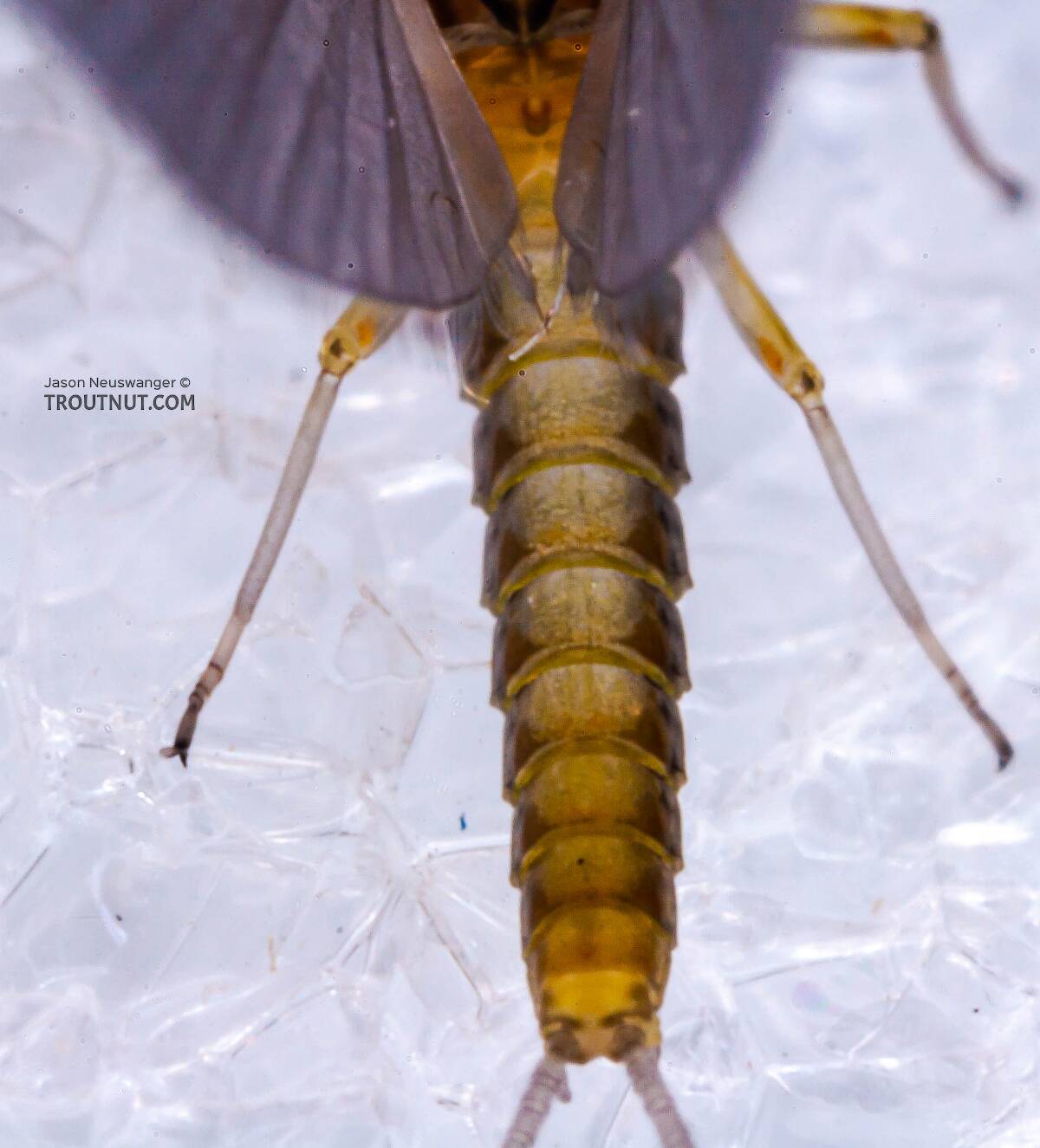 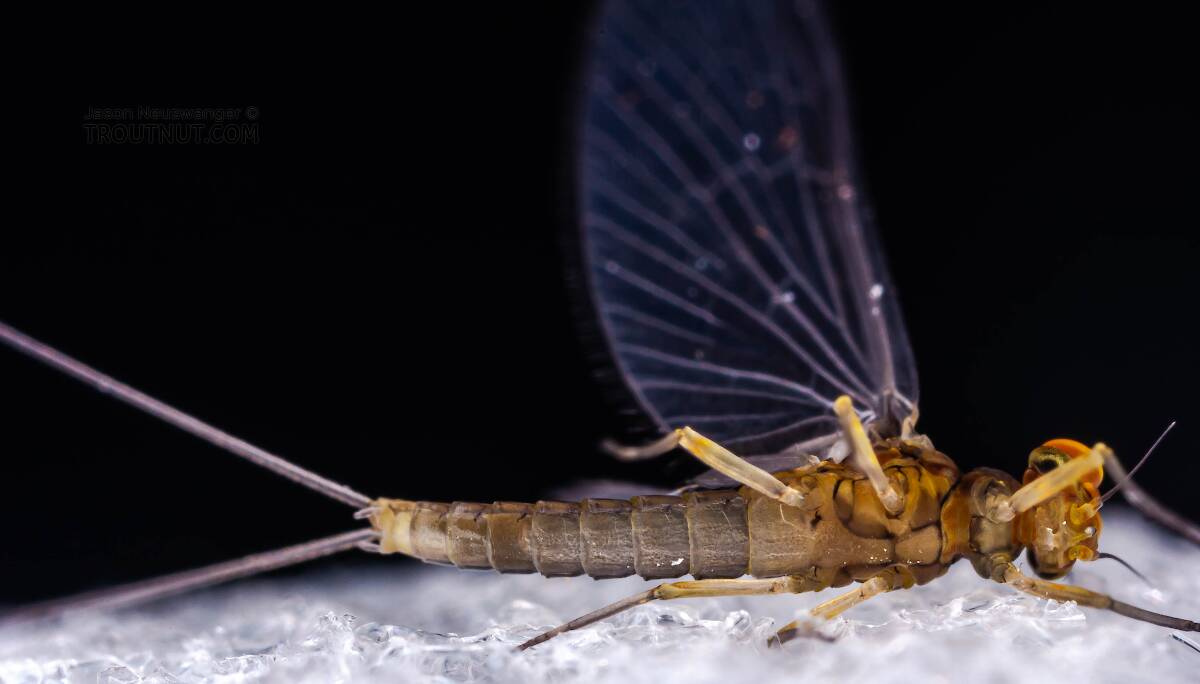 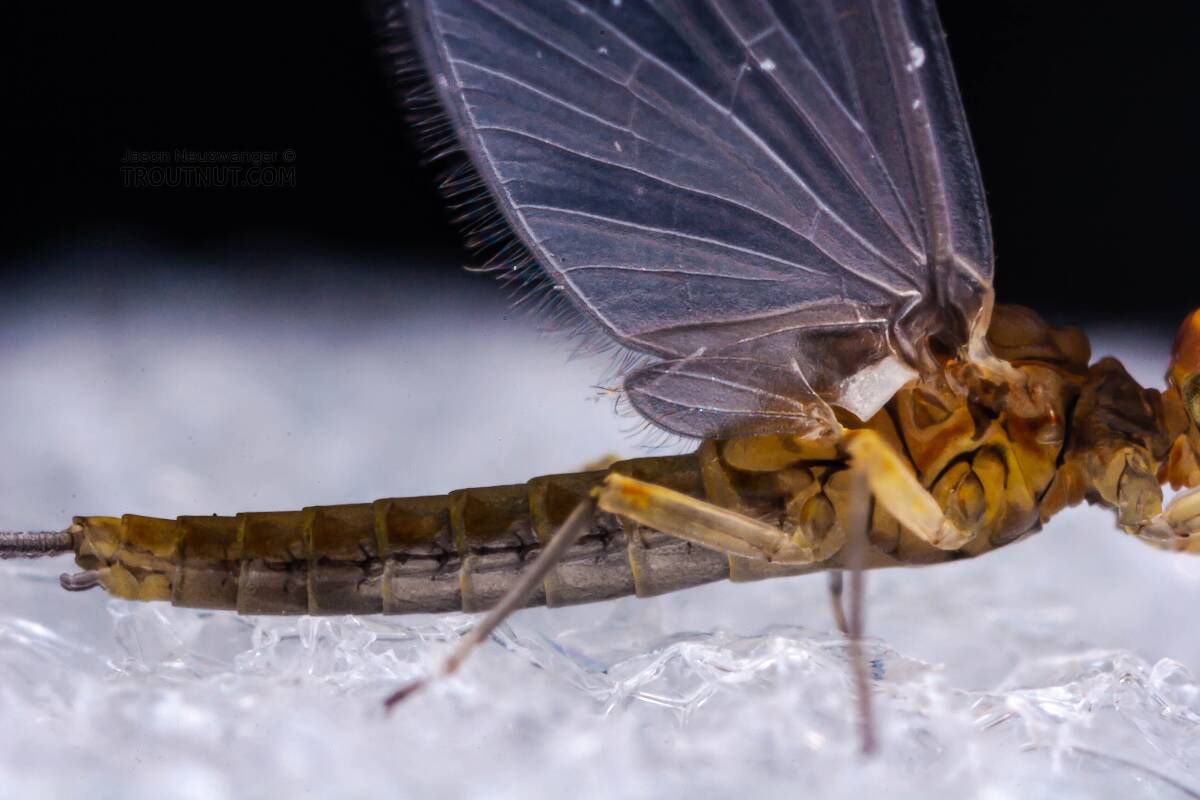 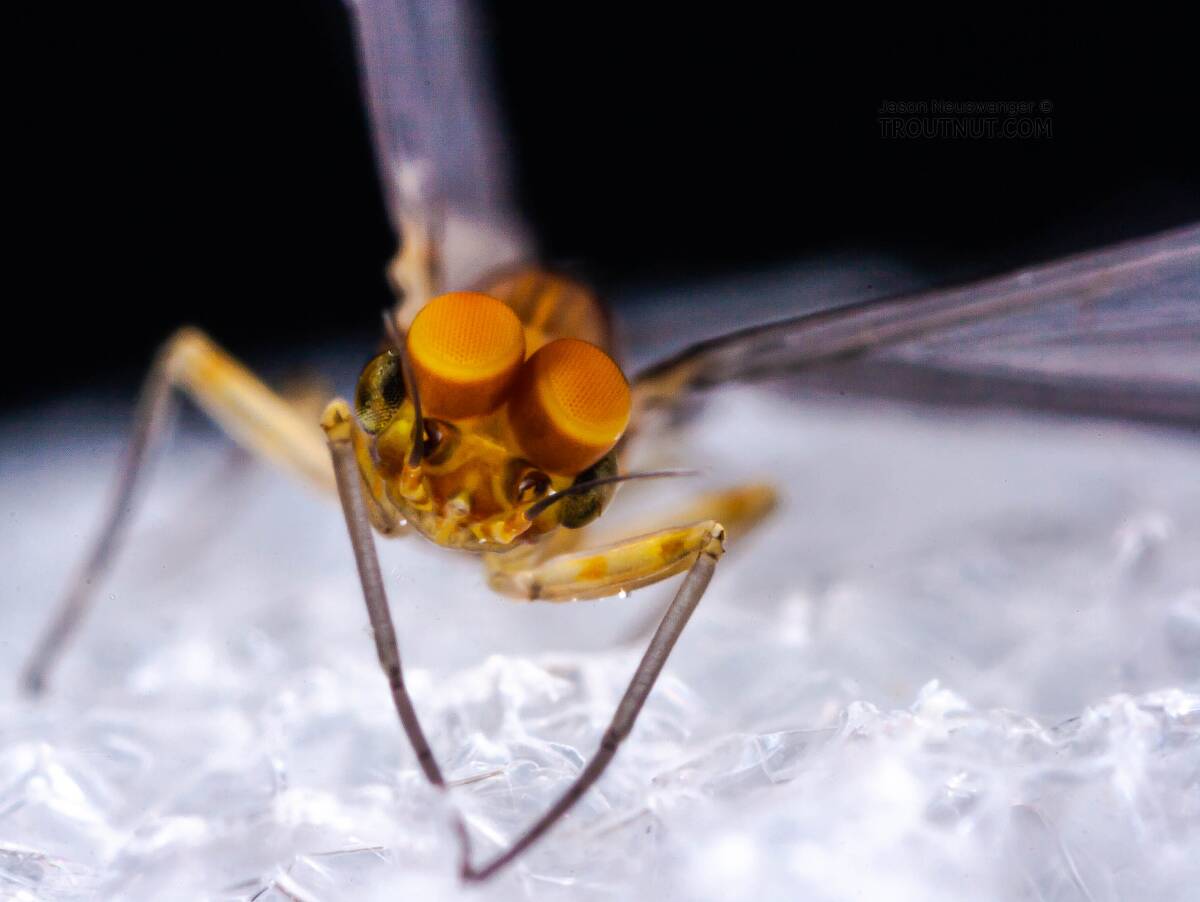 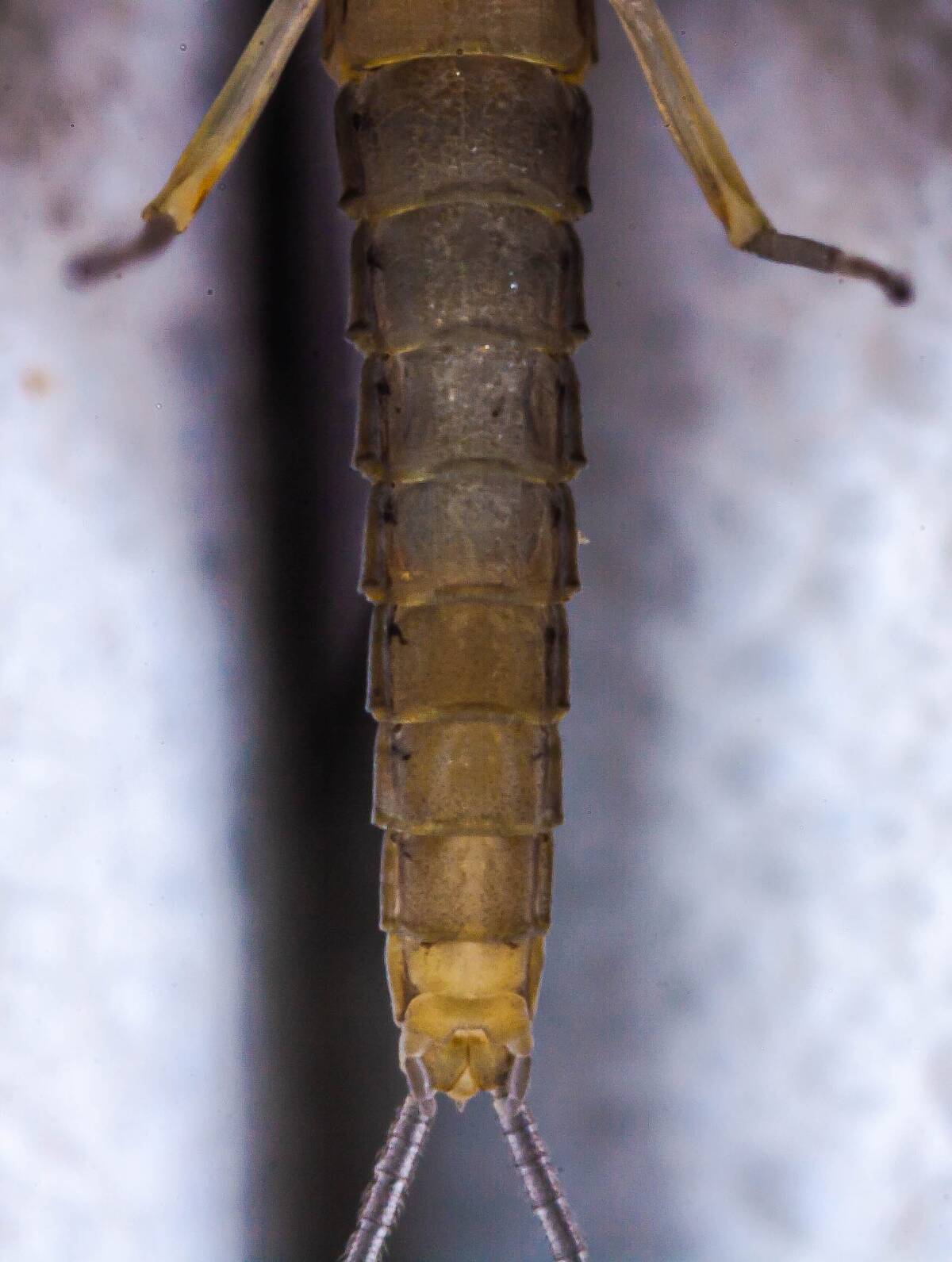 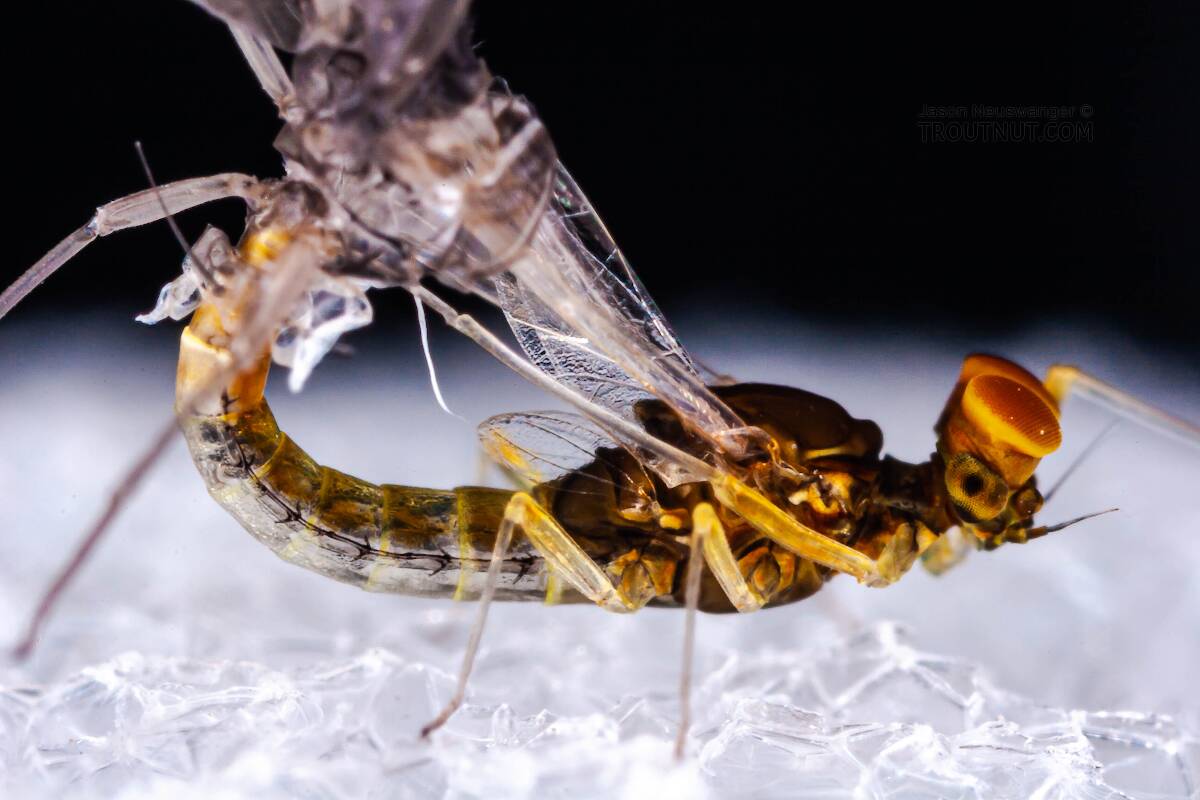 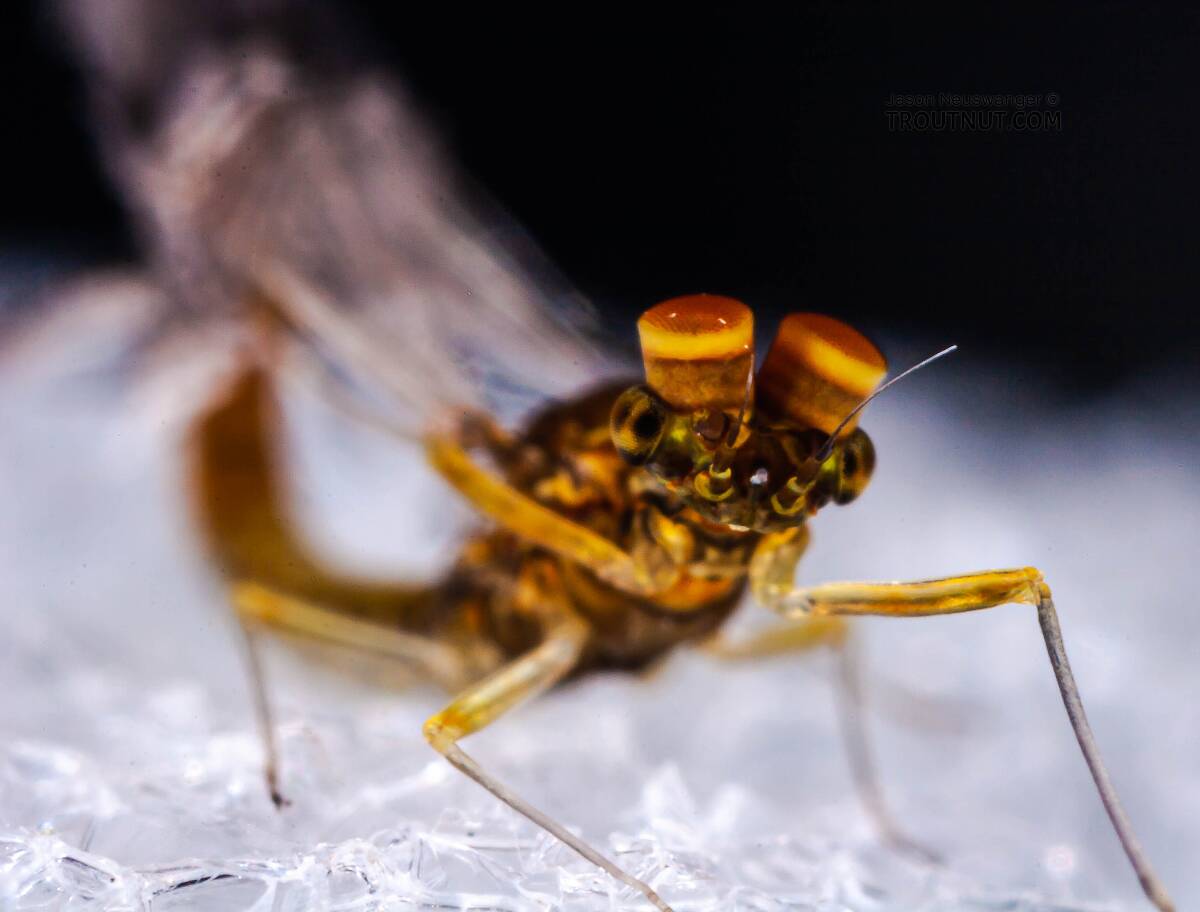 Baetis
3 replies
Posted by Martinlf on Jan 30, 2016
Last reply on Jan 31, 2016 by PaulRoberts
So, in about a month olives will be hatching heavily in Central PA. Does anyone have a favorite pattern or secret weapon? Mine is a klinkhamer style emerger tied to match the natural, with a white or orange post for those slate grey days when I can't see anything on the water. If the fish seem picky, I'll go to a dun post, though.
Reply
Acerpenna?
Posted by Entoman on Oct 25, 2011
Last reply on Oct 25, 2011 by Entoman
Hi Jason,

Excepting Bob Newell's nymphs, I believe the photos on the Acerpenna genus hatch page are actually Baetis. Looking closely at the images shows characters hard to reconcile with Merritt IV couplet 37(36') for Acerpenna that reads in part as follows, "...beyond costal process anterior margin of hind wing undulate; terminal segment of male forceps approximately four times as long as wide..."

The specimens do match up with Baetis by the process of elimination as the preceding couplets and those that follow rule out other possibilities by negative determination. The characters of baetis are so variable that the keys have to be structured this way, I guess.

Those Darn Olives
10 replies
Posted by Martinlf on May 28, 2009
Last reply on May 30, 2009 by Martinlf
Tuesday was a very interesting day on a central PA limestone river. Cooler by about 20 degrees, it rained virtually all day off and on, mostly a light rain. By noon there were a variety of olives on the water. Some may have been Acerpenna--if they hatch this early in the season. They were tiny and had some yellow-orange in the bodies.

There were many others as well, all ranging from about a size 22 to a size 26, some with grey wings, some about a size 22 with black wings. The fish seemed to be keying on these latter bugs, which were more visible at least to me, and seemed to be more plentiful. Anyway, I caught fish on a parachute emerger with a black post. I'm wondering if the black winged olives might be Acentrella--the bug formerly known as Pseudocloen. Someone a few years back identified these bugs to me as Pseudocloen, but I'm not at all sure he was right.

The only black-winged olives I can find in Knopp and Cormier (yes, I know it's an imperfect reference--but it's the most detailed Mayfly book I own) are Baetis brunneicolor, which they list as both a western and eastern species, but only describe the western species as having black wings. They give Acentrella turbida the common name of "little slate-winged brown quill" but I think of slate wings as darker grey, not black.

Finally, I'd like some help on a very mean fish. He was eating olives--I'm not sure which ones, or at what stage of emergence--right in front of me. I threw several patterns at him, and had I not been shaking with the cold I might have tried a few more. (I finally left for the warmth of the car's heater and some more cooperative fish downstream.) The only thing that got a nod was a sunken soft hackle, but he refused that also after giving it brief consideration. What would you have thrown at him?
Reply
shuck and belly
2 replies
Posted by Martinlf on Dec 23, 2006
Last reply on Dec 27, 2006 by Martinlf
That sounds like some southern jive tune, doesn't it?

I seem to recall that we had a discussion about mayfly shucks a while back, in which we discussed the more opaque and dark coloration of invaria or rotunda shucks. These acerpenna shucks look much lighter, and greyish in color. Am I right? Are they also more translucent? What color are the nymphs, and what color Z=lon would you use to imitate a shuck on an emerger for this bug? Would this hold true for most baetids? This might explain the excellent luck I've had with the Little Lehigh olive emerger, (basically an RS2 design--see the Litle Lehigh Fly Shop website) which has a shuck of natural CDC that is fairly greyish in color.

Also, the first picture shows a clear difference in the color of the top and bottom of the abdomen, another good cue for dubbing color. Jason, these photos are amazing! I hope you have some luck with photos of emergers in the spring.
Reply