These stoneflies, the "little yellows" and "little greens," are quite common Summer fauna. They are spread out in a mix between the different genera. The common name for them is Sallfly.

Time of day: Afternoon and evening

Error: Tried to display an image with no data available.

Specimens of the Stonefly Family Chloroperlidae 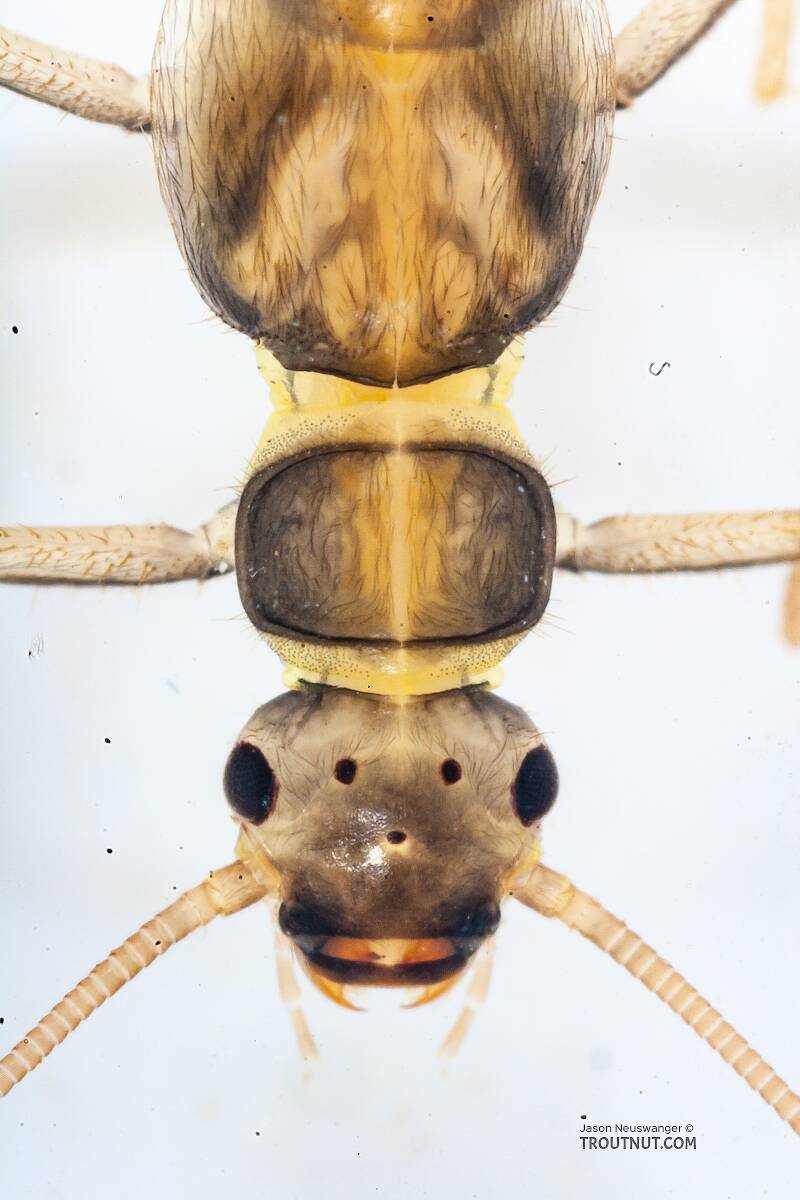 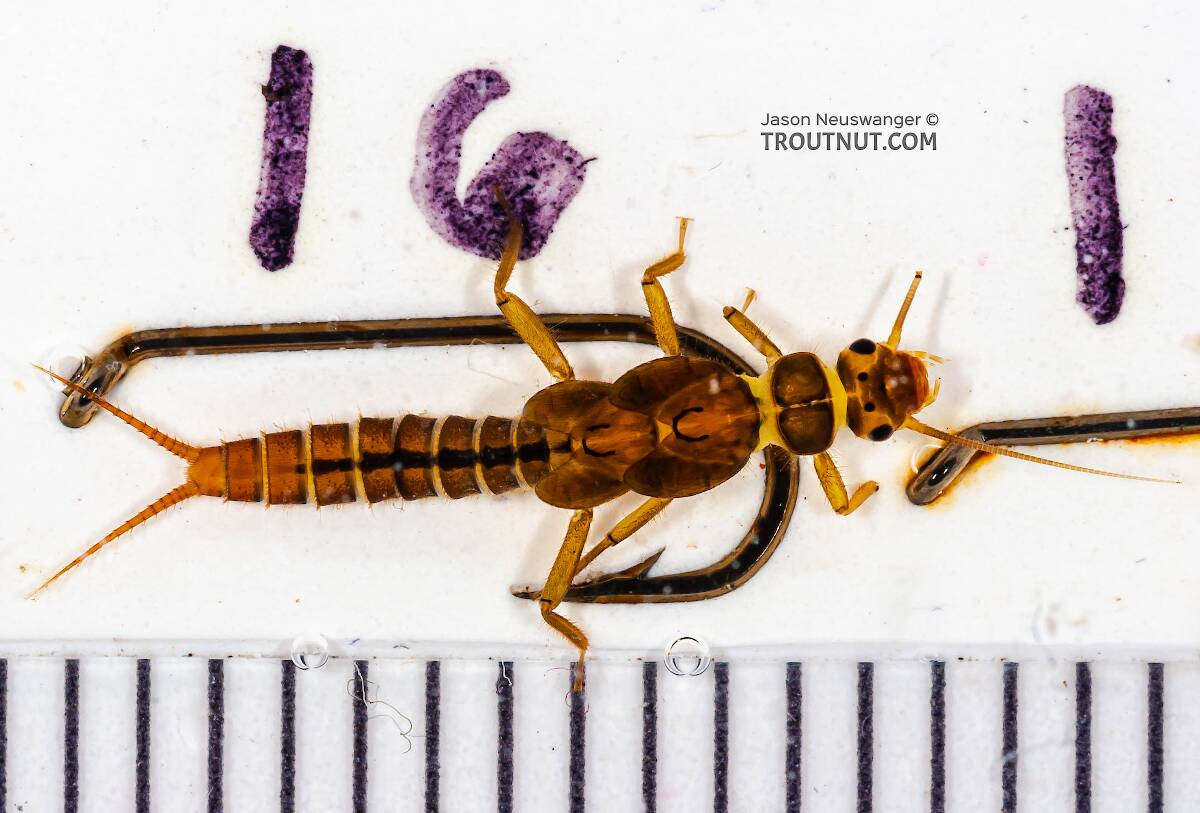 Collected May 13, 2007 from the Delaware River in New York
Added by Troutnut on May 18, 2007
Sweltsa (Sallflies) Stonefly Nymph
13 Pictures

This one was tricky to identify. The "thick, depressed dark clothing hairs" on the thoracic sterna inside the coxae, which indicate Sweltsa, are fairly sparse and very difficult to see in my photos, although more apparent under the microscope. However, if I decide those hairs are too sparse to be "thick" and follow the key, I end up pretty clearly at Haploperla. However, Haploperla should have the inner margin of the hind wingpads approximately parallel to the body axis, and they're clearly divergent on this specimen. The pronotal fringe hairs should also be longer than they are in this specimen. So following that whole branch of the key was probably wrong, which leads back to this one being Sweltsa. Unfortunately, nymphs have only been described for a small number of Sweltsa species.

I found just a few of these nymphs alongside a much larger number of bland, typical Sweltsa nymphs.

Collected May 14, 2022 from the South Fork Snoqualmie River in Washington
Added by Troutnut on May 16, 2022
Suwallia pallidula (Sallfly) Stonefly Nymph
6 Pictures

This specimen keys out to Suwallia, for which I did not find any nymph species keys. However, I'm placing it in Suwallia pallidula because I caught a few adults in the same spot that closely resembled the abundant nymphs and keyed them out to species. Features I noted under the microscope when keying this specimen to genus included apical hairs of cercal segments that were directed at posterior angles, and the longest apical hairs of distal segments were shorter than their following segment.
Collected July 28, 2019 from Mystery Creek #199 in Washington
Added by Troutnut on July 30, 2019
Alloperla (Sallflies) Stonefly Nymph
9 Pictures 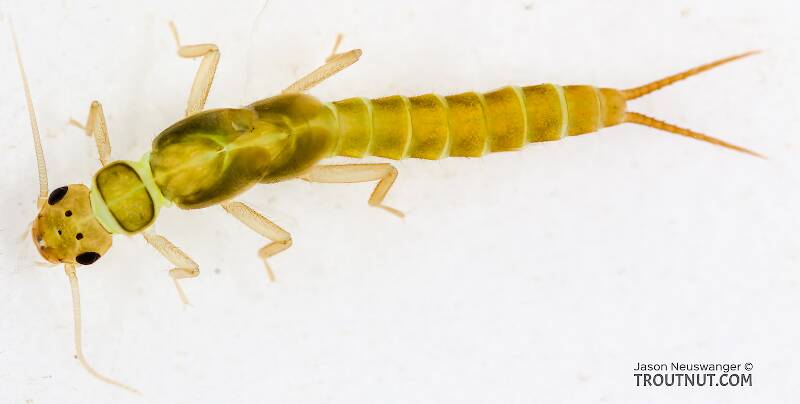 This was by far the most abundant stonefly in my sample on May 14th.
Collected May 14, 2022 from the South Fork Snoqualmie River in Washington
Added by Troutnut on May 16, 2022
Sweltsa (Sallflies) Stonefly Nymph
8 Pictures 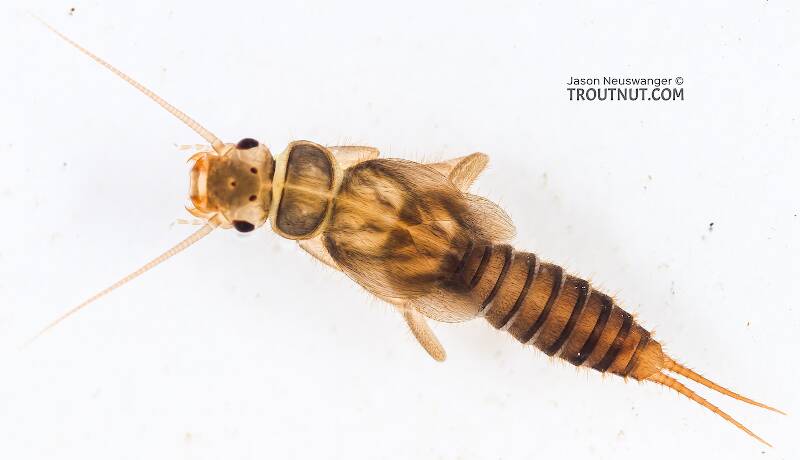 Collected May 10, 2008 from the Chena River in Alaska
Added by Troutnut on April 20, 2011
Alloperla (Sallflies) Stonefly Nymph
1 Picture 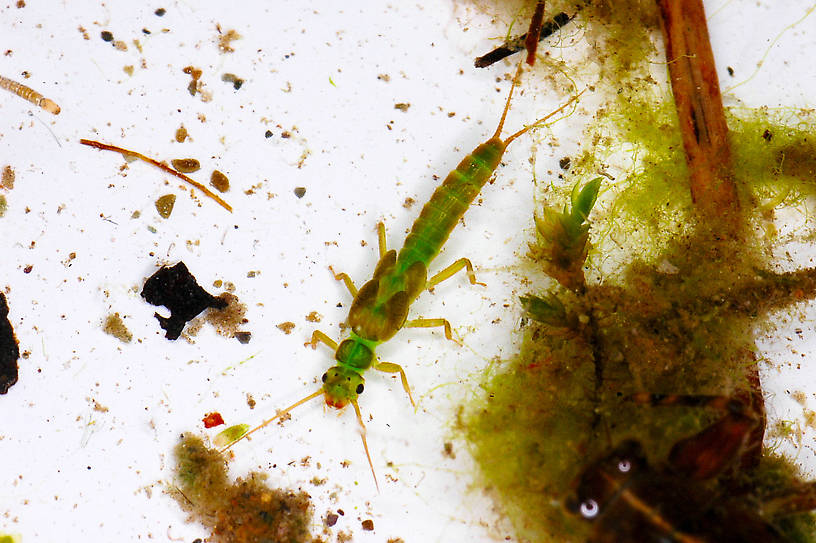 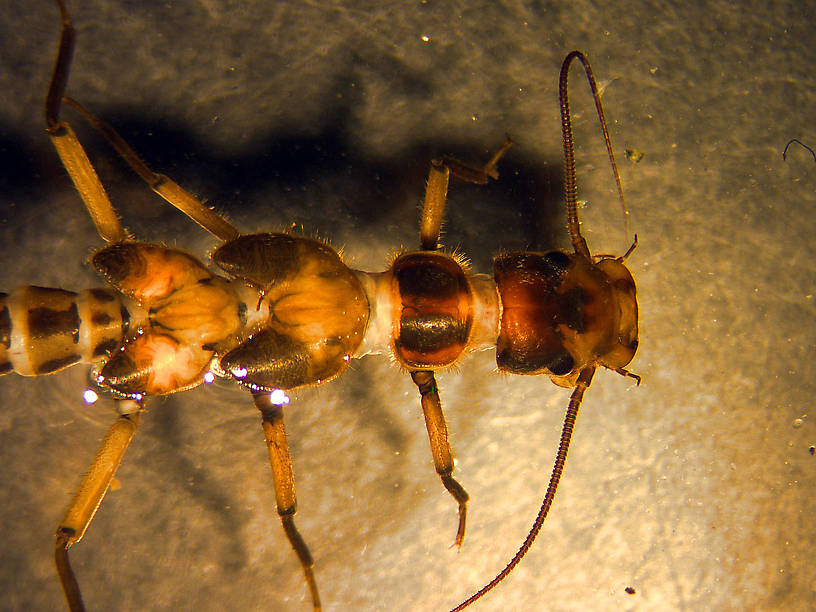 This species is uncommonly collected except from wells. It is a hyporheic species living in the river gravels of river floodplains until it is ready to emerge.
The head shape is an important identifier.
Collected April 15, 2010 from the Flathead River-upper in Montana
Added by Bnewell on June 26, 2011 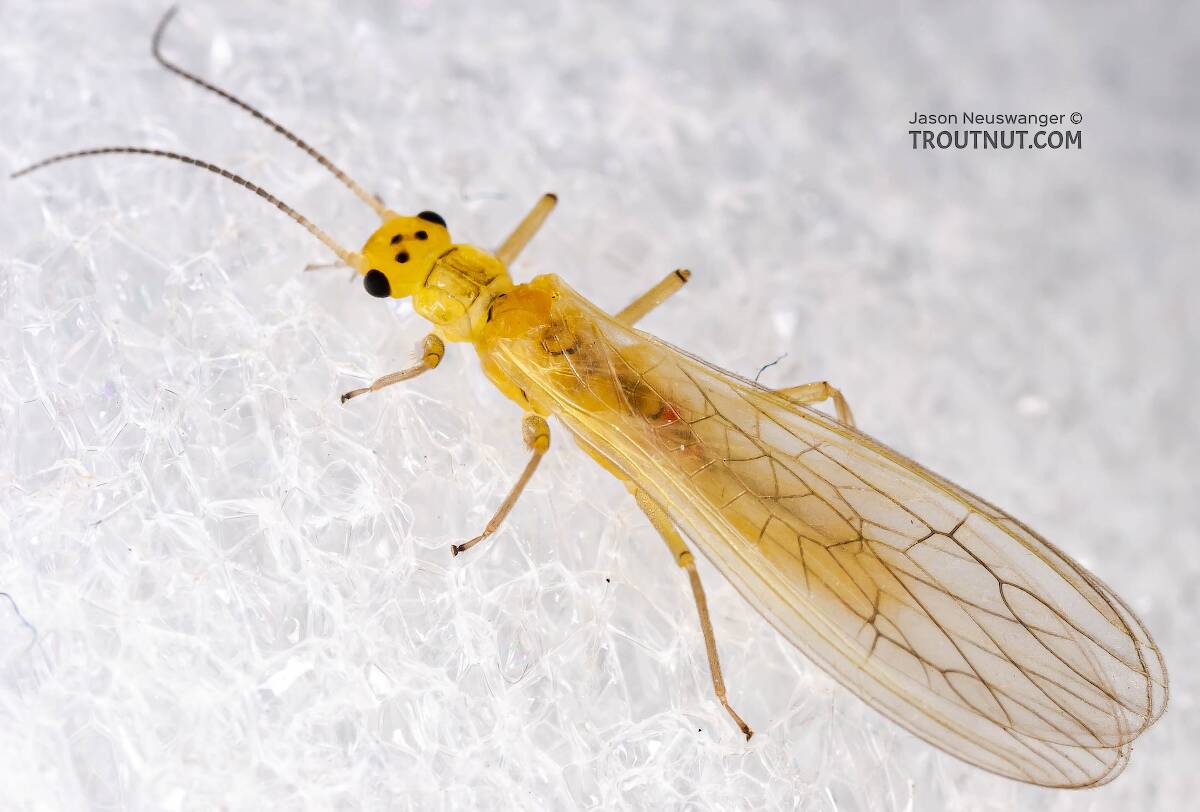 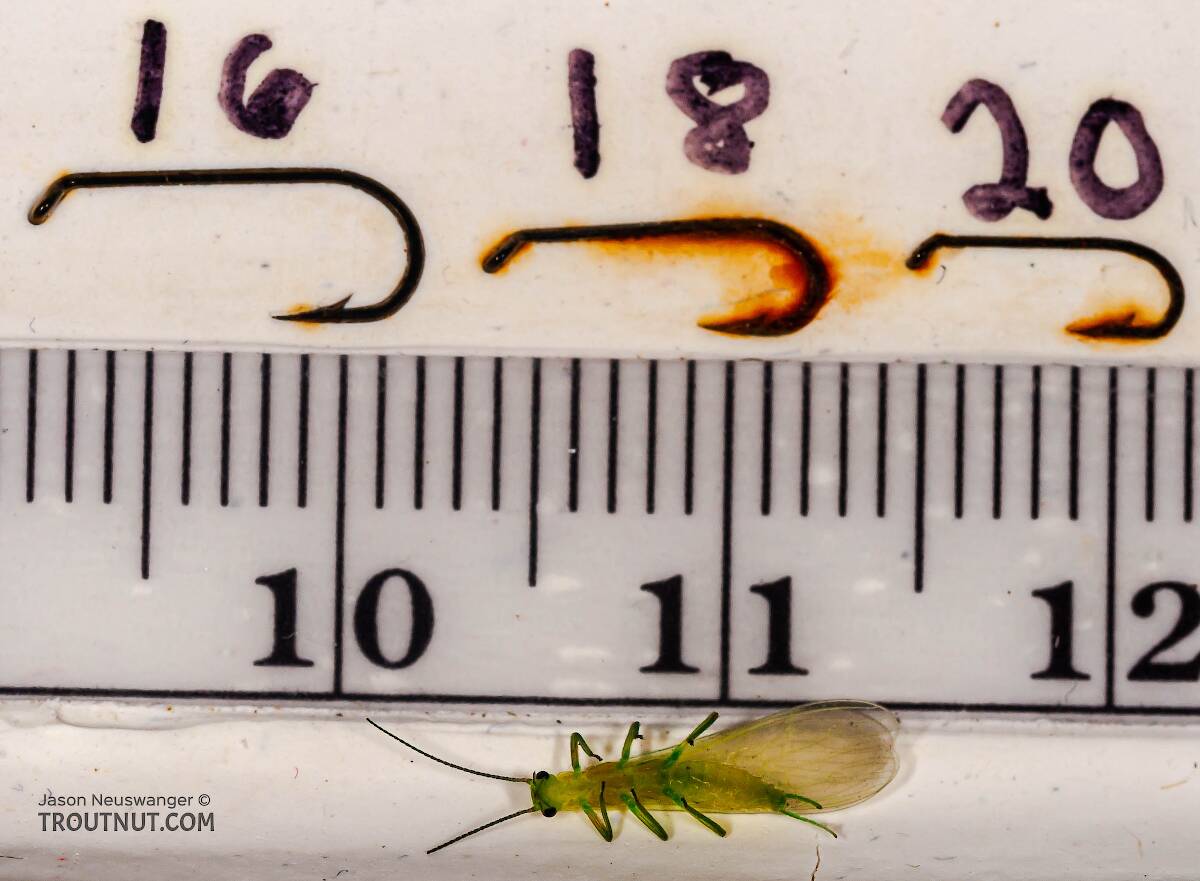 This specimen was completely green when I collected it from among many others gathered on a midstream rock along with their nymphal shucks early in the morning. There was also a yellow one with them, which I assumed was a different species. Now that I've seen how this one started changing from green to yellow, I have to wonder if they weren't the same species and the yellow one was just older.
Collected May 29, 2007 from Brodhead Creek in Pennsylvania
Added by Troutnut on June 4, 2007
Alloperla (Sallflies) Stonefly Adult
9 Pictures 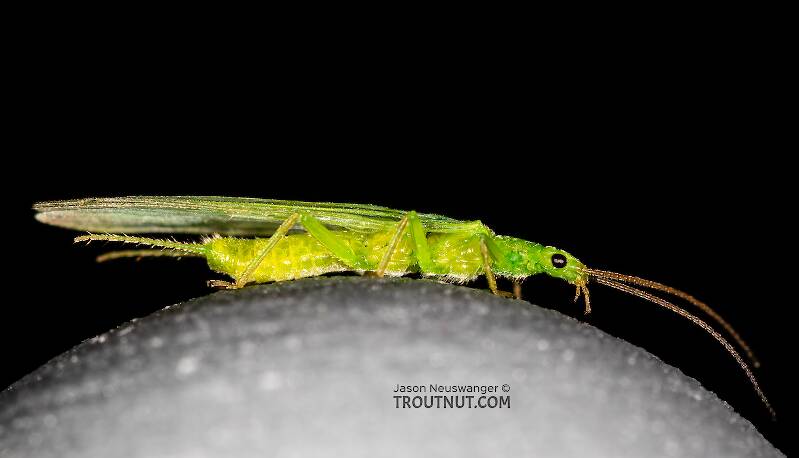 A large number of photos from the microscope allowed a fairly confident ID on this one, which not coincidentally matches very well a previous specimen of Suwallia pallidula that I collected in Washington.
Collected August 1, 2020 from Mystery Creek #237 in Montana
Added by Troutnut on August 18, 2020
Chloroperlidae (Sallflies) Stonefly Adult
4 Pictures 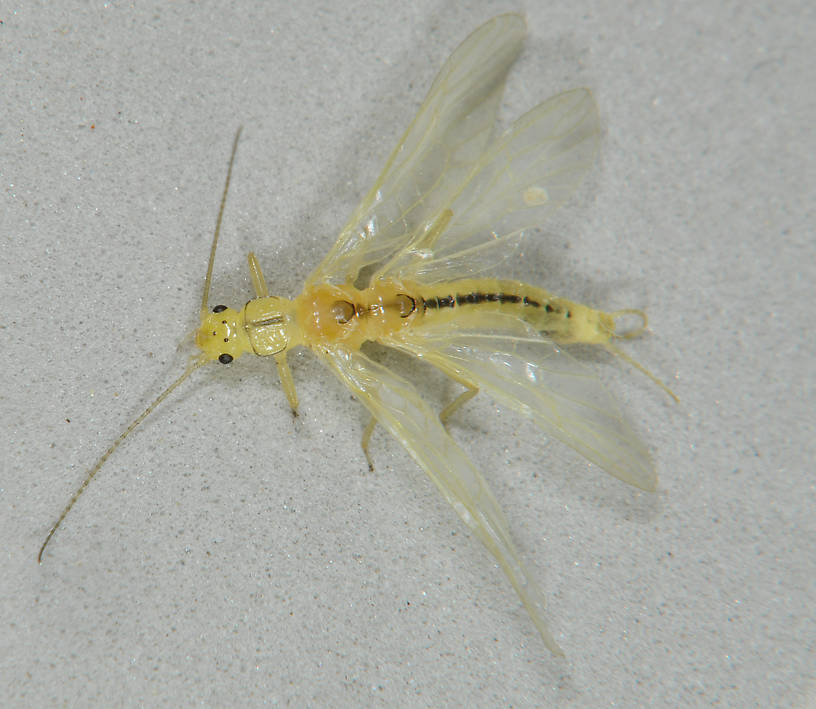 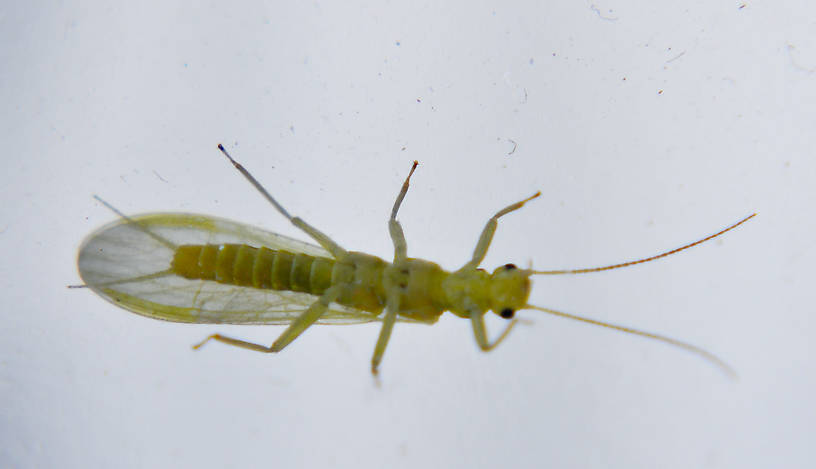 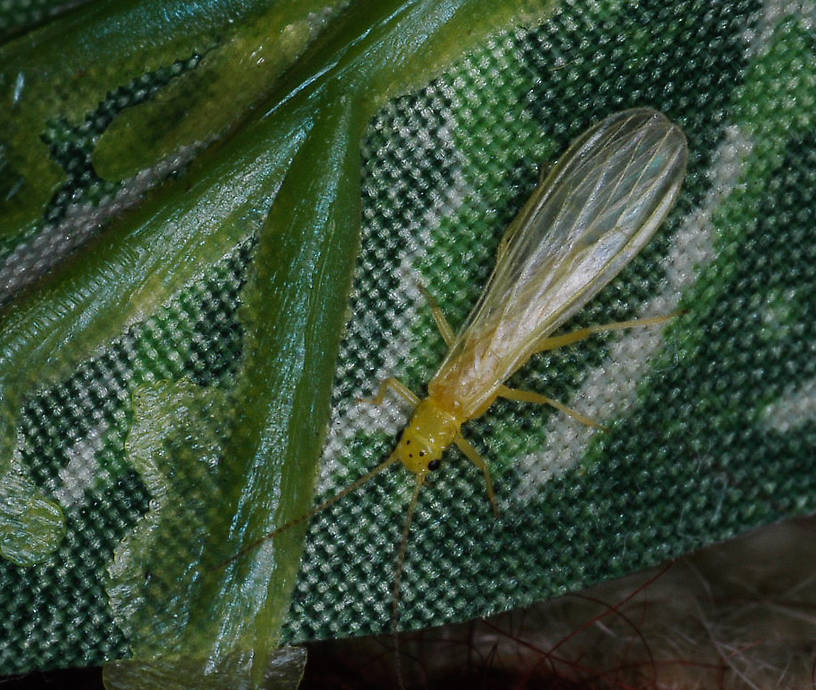 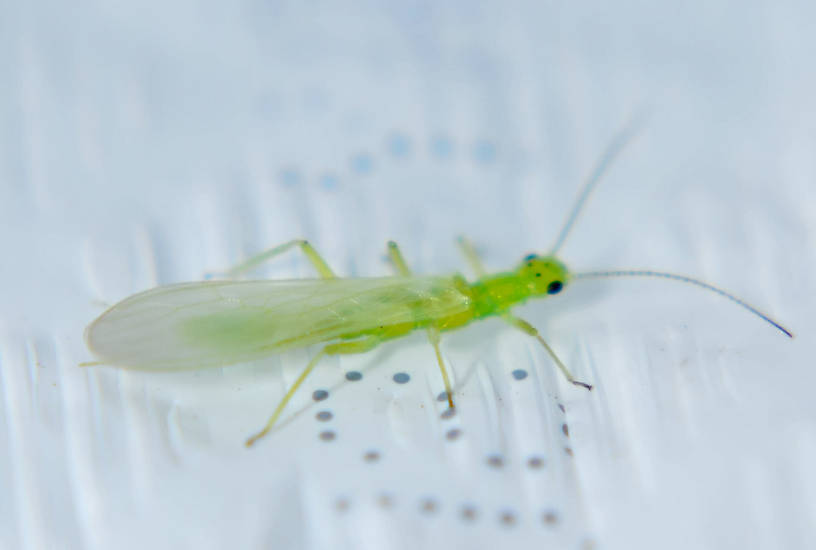 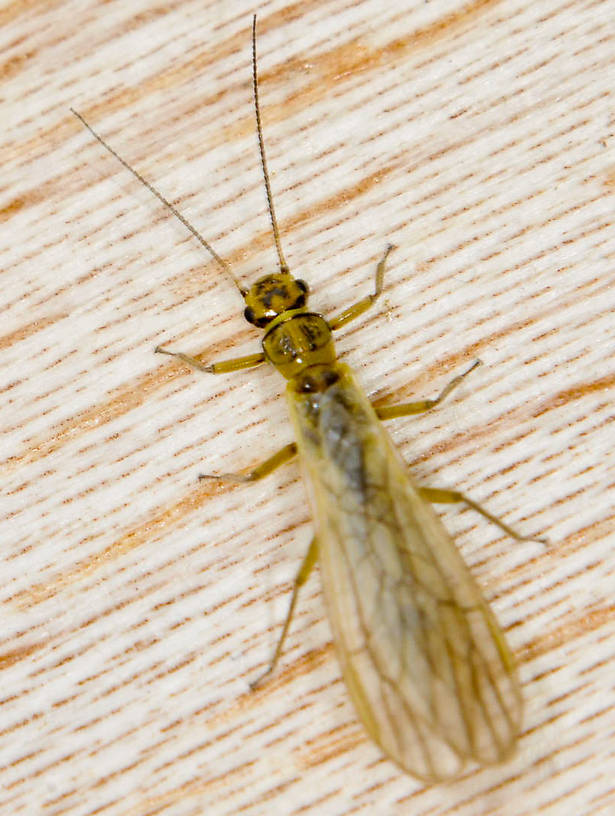 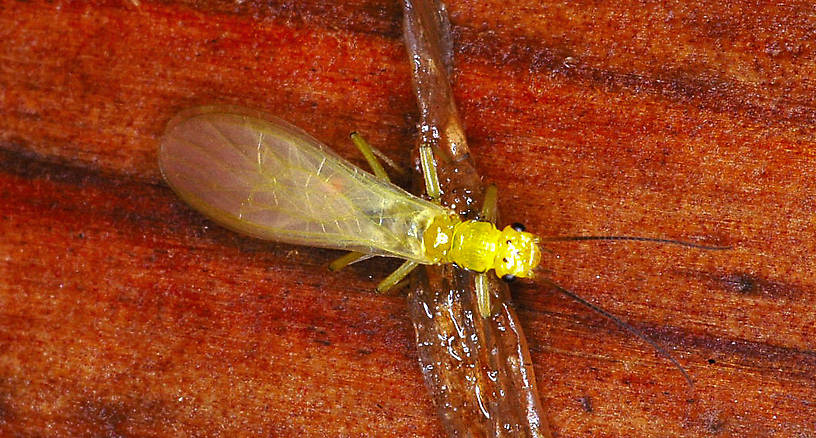 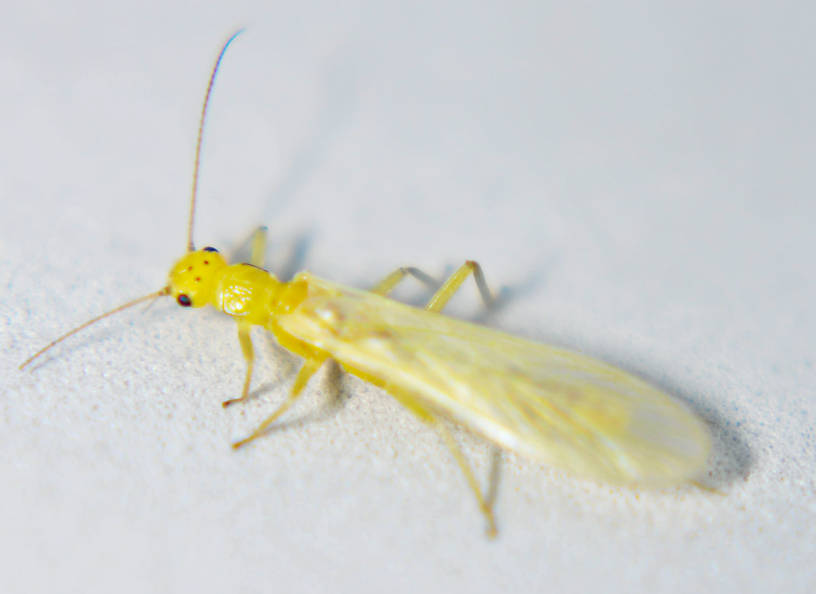 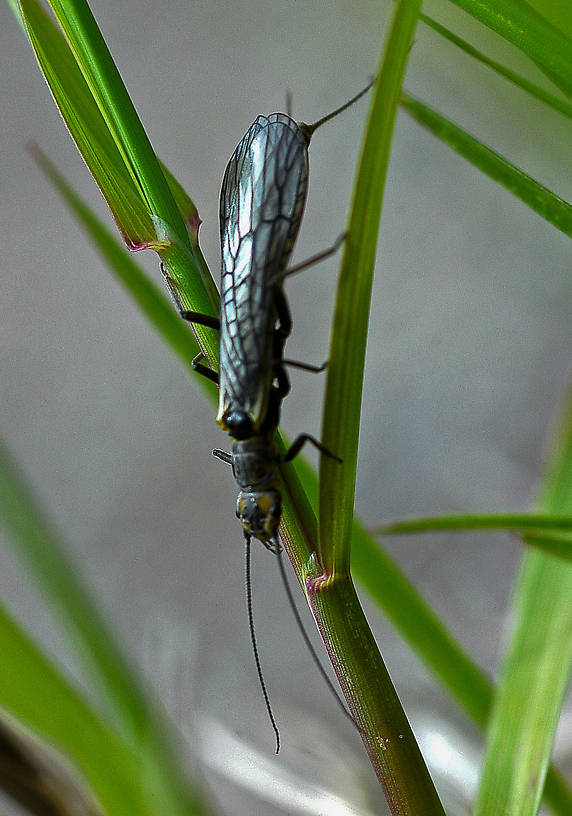 This is another stonefly that lives its nymphal life in the hyporheic zone, flood plain gravels. In this case, the gravels of a small stream, Roy's Creek, that flows into Flathead Lake at the Univ. of Montana Biological Station.
Collected May 9, 2005 from Flathead Lake in Montana
Added by Bnewell on July 3, 2011
Paraperla wilsoni (Sallfly) Stonefly Adult
0 Picture
Missing image
Collected April 19, 2007 from Roy's Creek in Montana
Added by Bnewell on July 1, 2011

These stoneflies--abundant during midday--seemed at first to be flying around with plain yellow bodies, but on closer inspection turn out to have striking, fiery red abdomens.

In Baumann's Stoneflies of the Rocky Mountains, this specimen keys to Sweltsa fidelis, but the number of species in that key is fairly small and it might not be accurate. 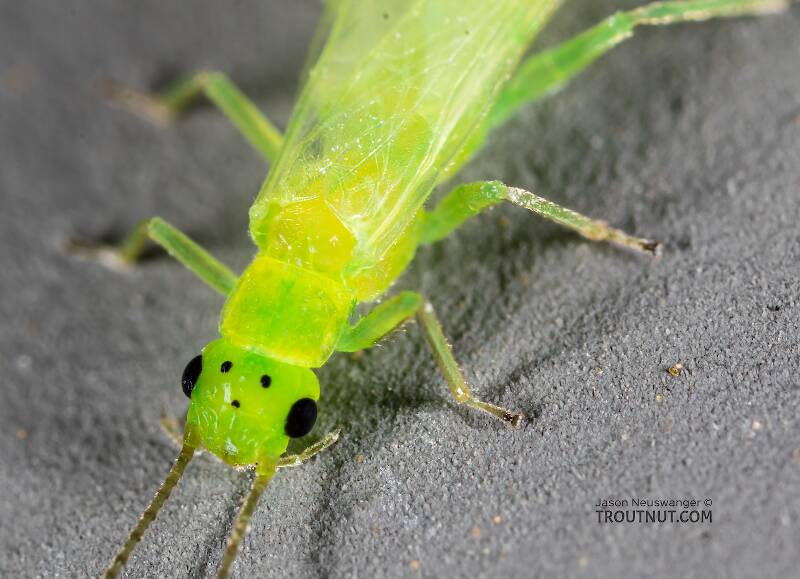 I collected a few of these throughout the afternoon. The positive ID on the adults allowed me to also put a species ID on the nymphs.
Collected July 28, 2019 from Mystery Creek #199 in Washington
Added by Troutnut on July 29, 2019
Female Suwallia pallidula (Sallfly) Stonefly Adult
6 Pictures

I didn't key this one out under the microscope, but I just keyed a similar one from Montana and this one matches the macroscopic appearance closely enough that I'm guessing it's the same thing.
Collected July 4, 2020 from Mystery Creek #249 in Washington
Added by Troutnut on July 12, 2020

This specimen unfortunately was blown away by the wind mid-way through the photographs, so I wasn't able to preserve it for an ID or get some of the other angles.
Collected August 4, 2020 from Green Lake Outlet in Idaho
Added by Troutnut on August 19, 2020 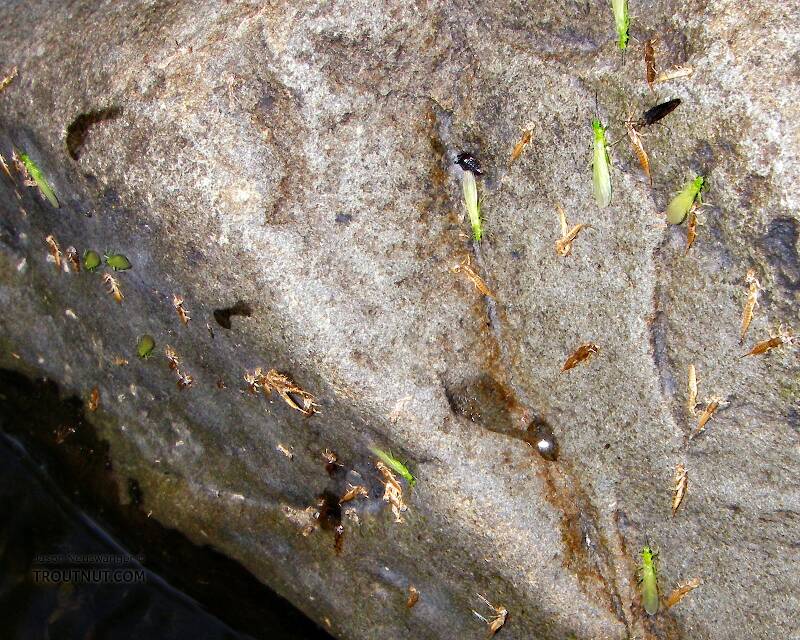 In this picture: Stonefly Family Chloroperlidae (Sallflies).
Taken May 29, 2007 from Brodhead Creek in Pennsylvania
Added by Troutnut on June 5, 2007
View Fullsize 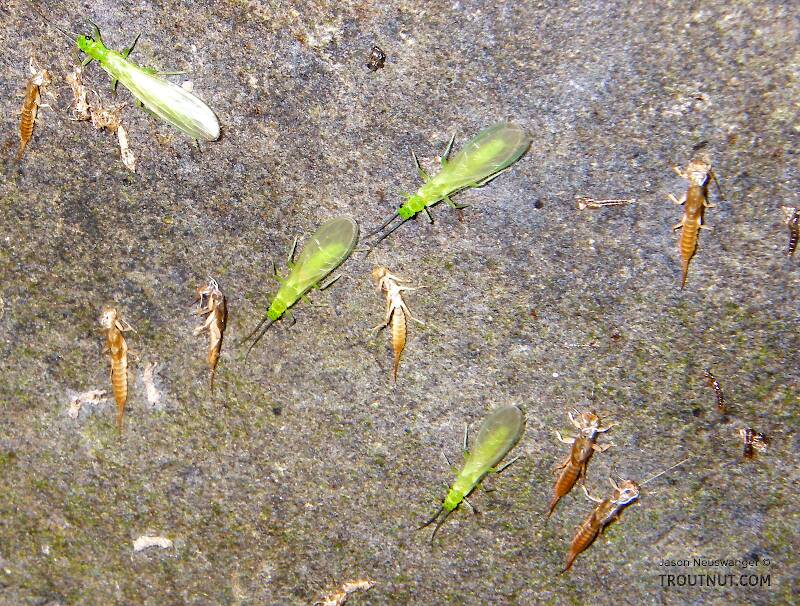 In this picture: Stonefly Family Chloroperlidae (Sallflies).
Taken May 29, 2007 from Brodhead Creek in Pennsylvania
Added by Troutnut on May 13, 2021