The large, diverse family of "true bugs" contains several insects of importance to anglers, both aquatic and terrestrial.

Perhaps the best known are the water boatmen of Corixidae, which are a primary trout food source at times in many high lakes, spring ponds, and slow-moving rivers. They are generally aquatic, although they may come out of the water to mate. I have seen good numbers of them flying over a northwoods river in late March, a sight that had me baffled until I captured one of the odd insects that kept flying past me and plunging into the water.

Other aquatic true bugs have received very little attention in
fly fishing literature, but they probably deserve more, because they are among the largest insects native to the trout's environment. The giant water bugs of Belostoma are especially favored, but trout also feed on the water scorpions of Nepidae. I plan soon to spend more time researching and imitating these insects to confirm my hunches and early observations.

The most famous terrestrial members of Hemiptera are the cicadas, which make for good fishing on those rare years when a large brood appears. Late every summer some fly fishers turn to tiny related terrestrials they call Jassids, which are the leaf hoppers and tree hoppers of the families Membracidae and Cicadellidae. 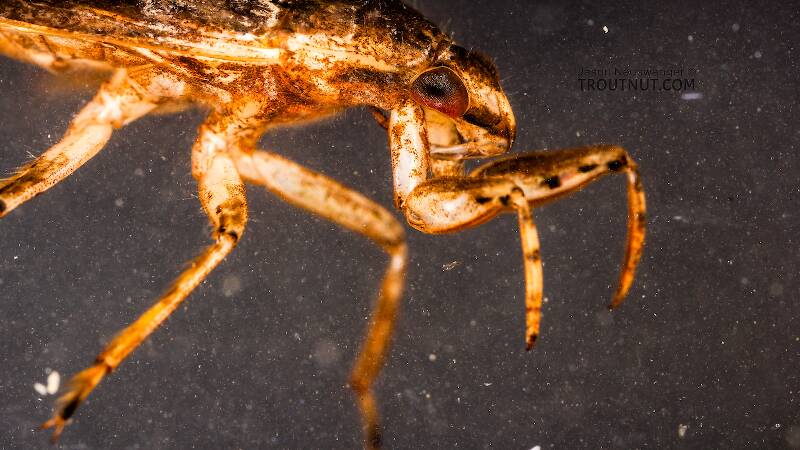 I'm glad I finally got one of these Belostoma water bugs under my good camera. I had been hoping to get one in my kick-net samples for a while with no luck, but I ended up finding this one drifting midstream just below the surface while I fished. I have frequently seen water scorpions do that, too, and I'm beginning to suspect that is a common situation travel for these large Hemiptera bugs, and perhaps the way trout are used to seeing them.
Collected April 24, 2007 from the West Branch of Owego Creek in New York
Added by Troutnut on April 24, 2007
Cicadidae (Cicadas) Cicada Adult
4 Pictures 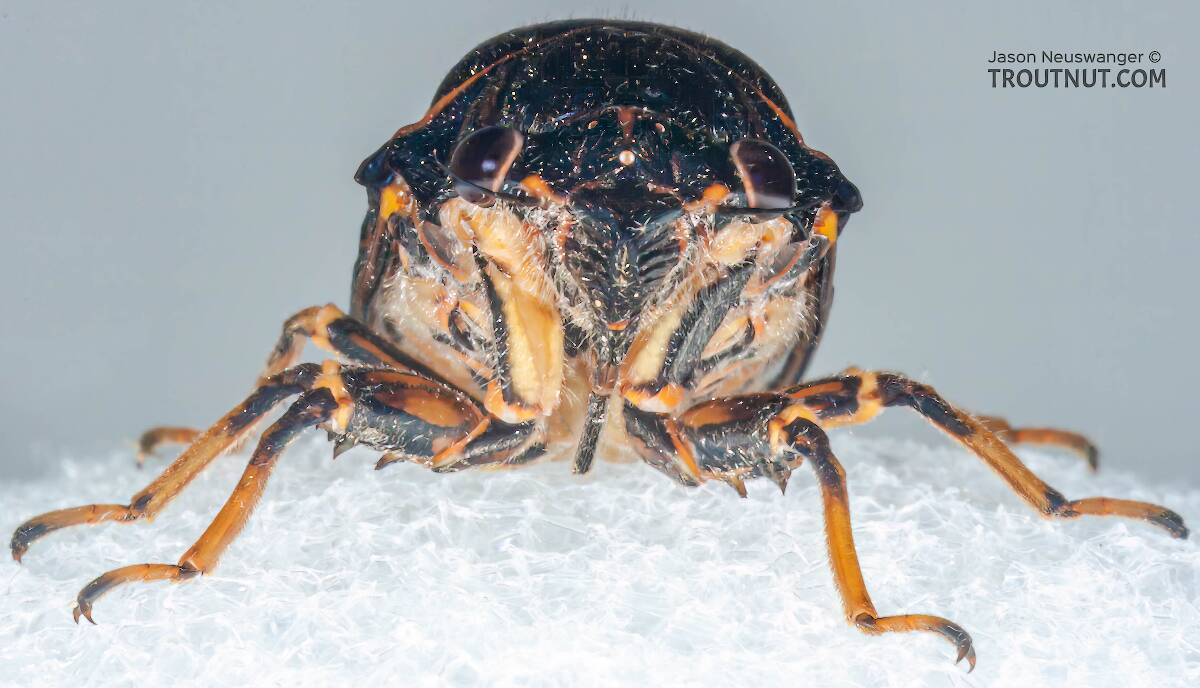 I found this cicada and several like it in the grass near my car as I put my waders on. Some of them were singing in the trees above the river, too, but I did not see any fall into the water.
Collected July 1, 2005 from the Bois Brule River in Wisconsin
Added by Troutnut on April 22, 2006
Sigara Water Boatman Adult
3 Pictures

Every picture of this specimen was taken with my old camera through a microscope.
Collected November 15, 2004 from Fall Creek in New York
Added by Troutnut on April 12, 2006
Notonectidae (Backswimmers) Backswimmer Adult
4 Pictures

Collected May 18, 2004 from unknown in Wisconsin
Added by Troutnut on January 25, 2006
Ranatra Water Scorpion Adult
7 Pictures 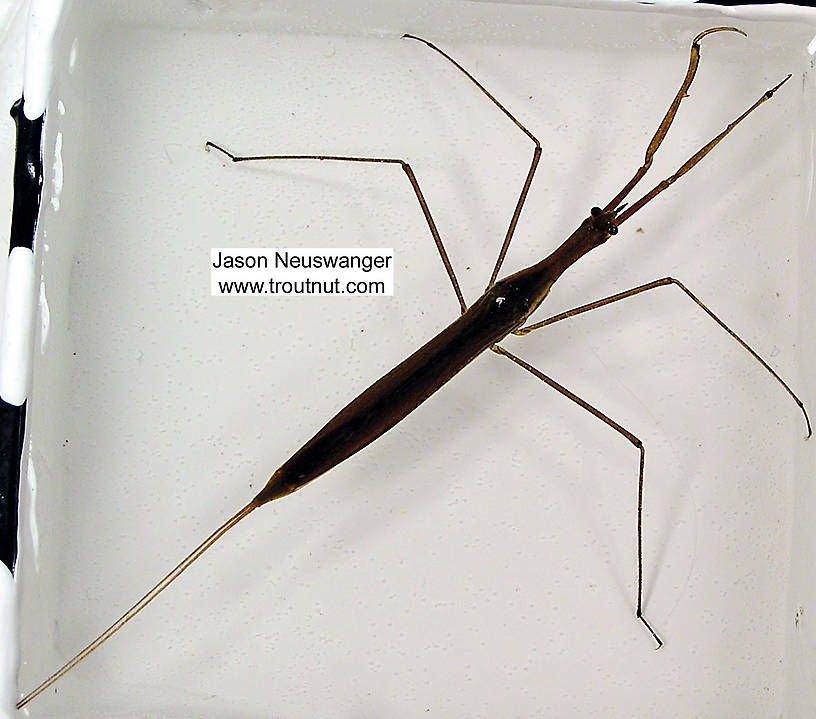 Here's a big water scorpion (no relation to actual scorpions). These guys are just about the most sinister-looking creatures you could find, and what's especially creepy is that they can come up out of the water and fly around, as I learned when one left my aquarium and buzzed my head while I was peeking into the microscope at a mayfly nymph.
Collected March 10, 2004 from unknown in Wisconsin
Added by Troutnut on January 25, 2006
Belostoma flumineum (Electric Light Bug) Giant Water Bug Adult
4 Pictures 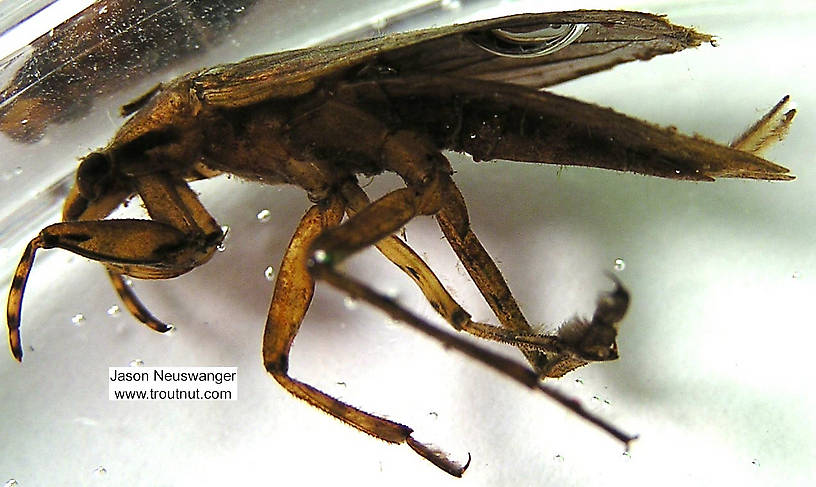 I haven't seen the imitation of these things stressed, but in August 2003 on one of my favorite rivers the largest brown trout I kept had stomachs full of these things.
Collected January 13, 2004 from the Namekagon River in Wisconsin
Added by Troutnut on January 25, 2006
Corixidae (Water Boatmen) Water Boatman Adult
3 Pictures 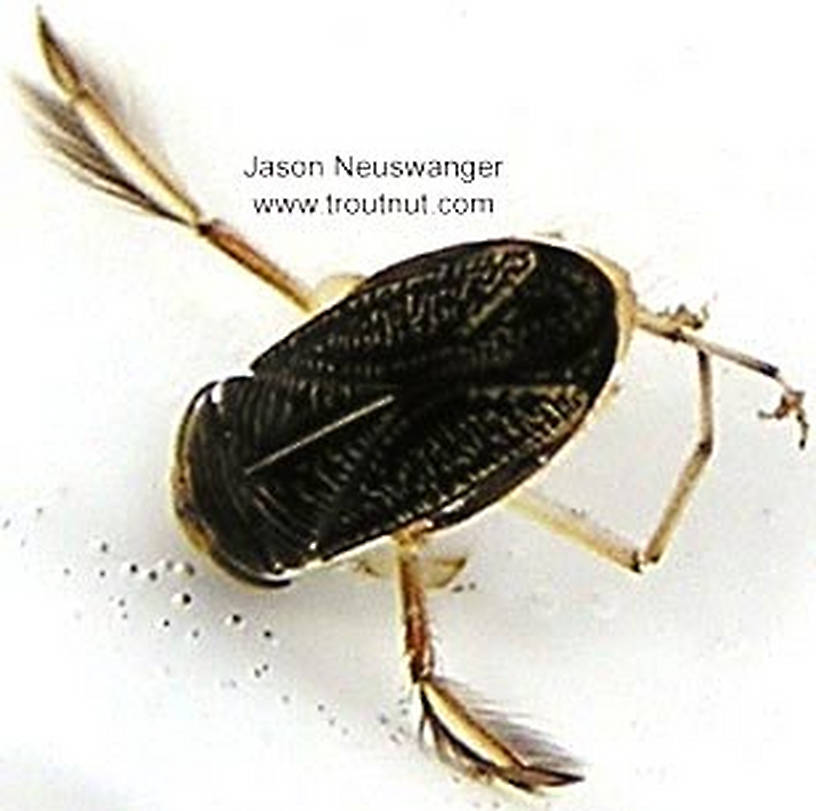 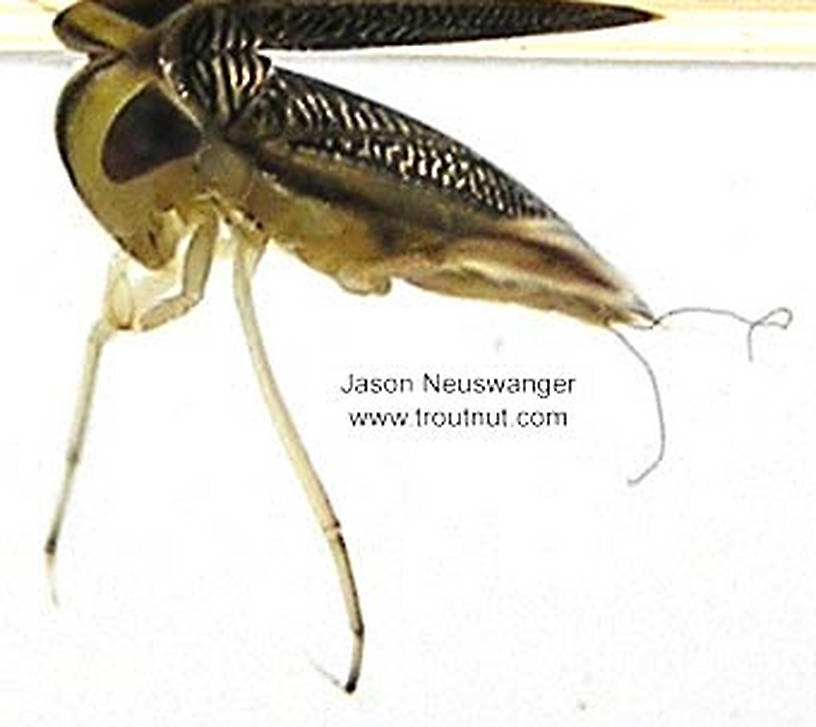 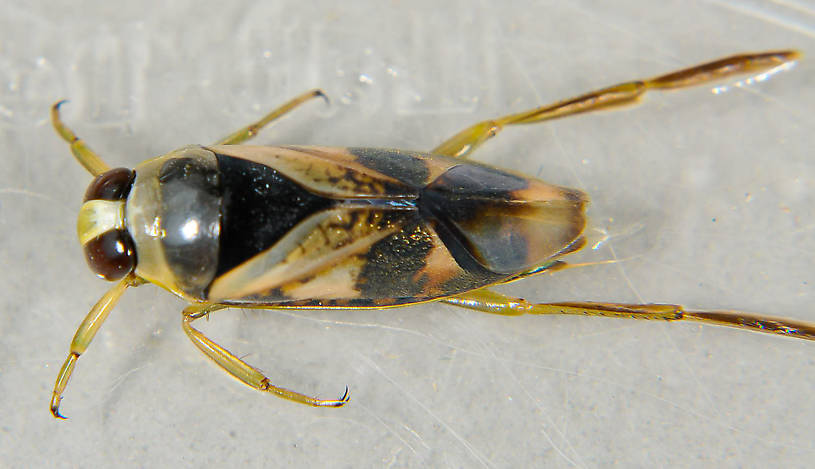 Notonectdiae adults can leave the water and fly off whenever they wish. This specimen was caught when it landed on my car. These adults are one of the few aquatic insects that can protect itself with a strong beak.
Collected June 6, 2011 from the Touchet River in Washington
Added by Bnewell on June 26, 2011 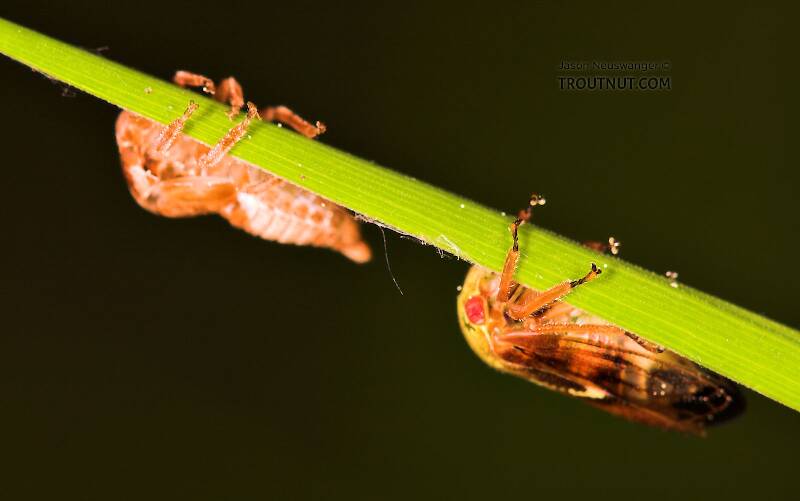 This little leafhopper (also called a jassid by anglers) had apparently just emerged from its nymph.
In this picture: True Bug Family Cicadellidae (Leafhoppers).
Taken June 7, 2006
Added by Troutnut on June 30, 2006 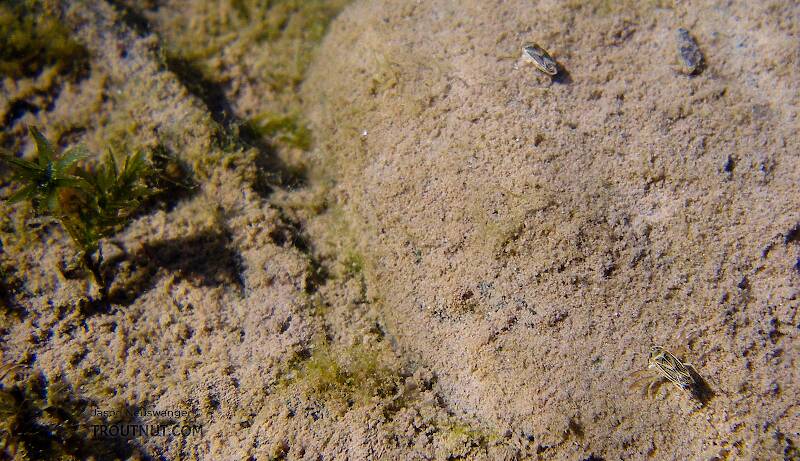 In this picture: True Bug Family Corixidae (Water Boatmen).
Taken May 13, 2007 from the West Branch of the Delaware River in New York
Added by Troutnut on June 5, 2007
View Fullsize 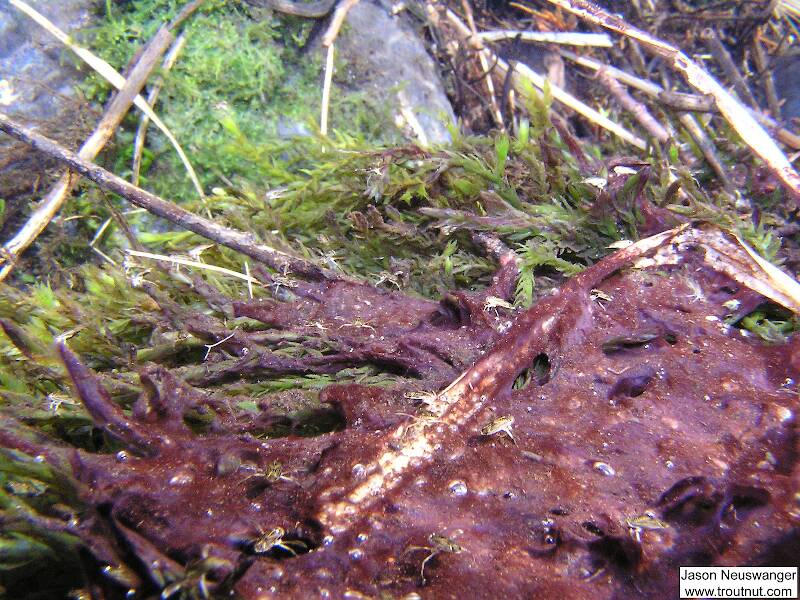 A large school of water boatman swims over a strange purple substance at a crystal clear spring.
In this picture: True Bug Family Corixidae (Water Boatmen).
Taken March 30, 2004 from Mystery Creek #90 in Wisconsin
Added by Troutnut on January 25, 2006
View Fullsize 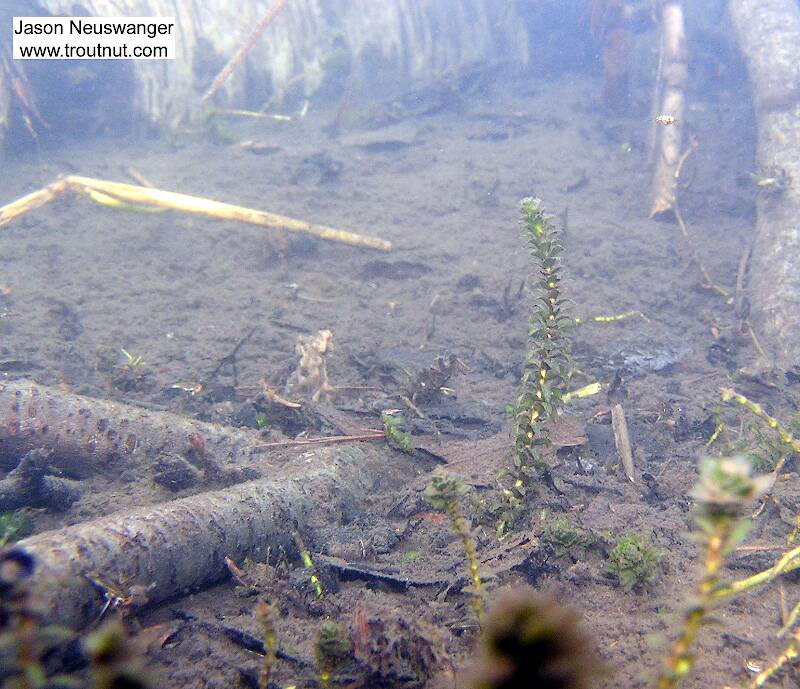 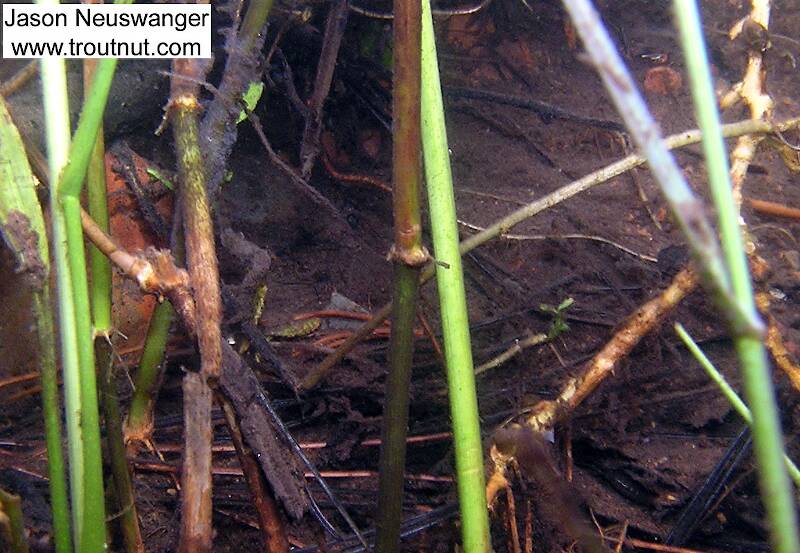 A water boatman and a scud are visible in this picture. Can you find them?
In this picture: Arthropod Order Amphipoda (Scuds) and True Bug Family Corixidae (Water Boatmen).
Taken April 13, 2004
Added by Troutnut on January 25, 2006
View Fullsize 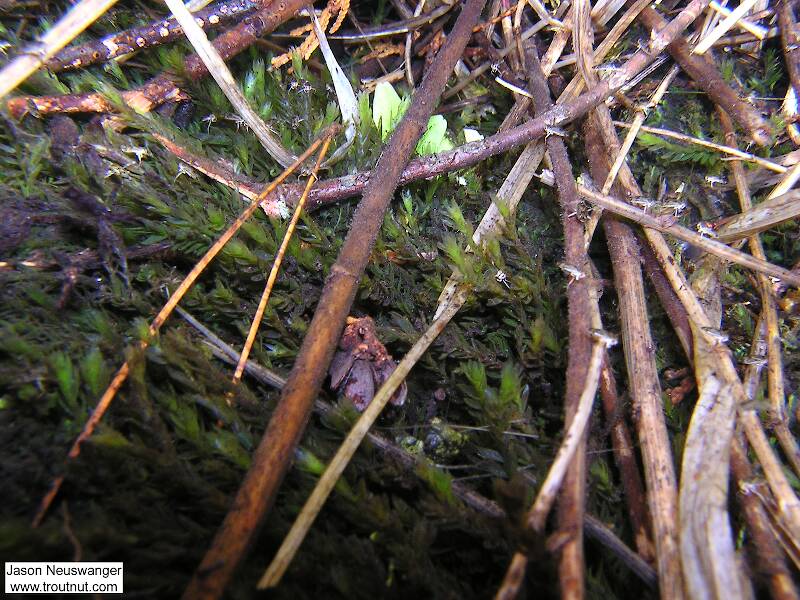 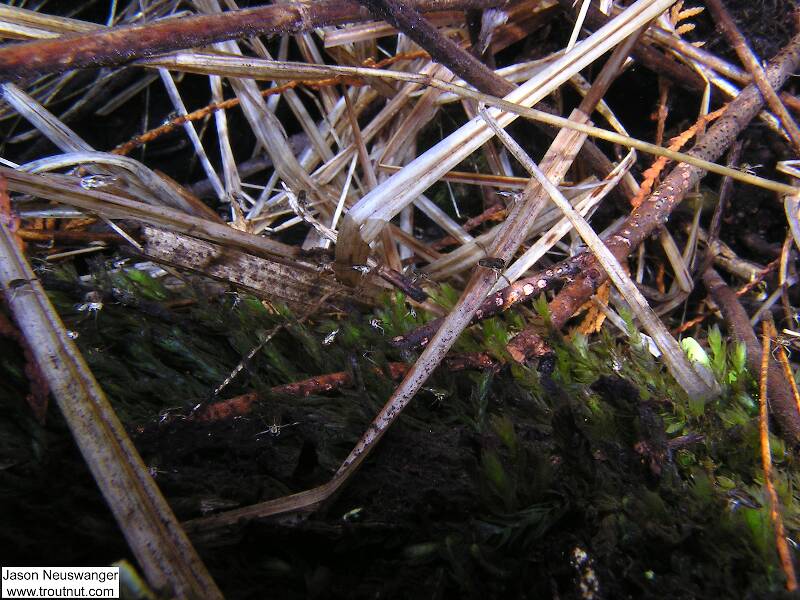 DO You Remember???
6 replies
Posted by JANNEY on Jan 4, 2007 in the family Cicadidae
Last reply on Feb 7, 2007 by Konchu
My brother and I have a disagreement about bugs from our childhood.

I remember a swarm of cicadas (17-year locusts), and I'm trying to place the year. It would be 1954 to 1959, I believe. I remember the cicadas' distinctive call ringing through the summer (spring?) night. They covered anything that shed light—lampposts, storefront windows, porch lights. They were about in huge numbers. When you walked down the street, you couldn't avoid stepping on them, and they crunched. (Big bugs.)

My brother says he only recalls a mayfly swarm—post 1959—that was so bad it caused auto accidents on the freeway because cars ran over the mayfly bodies and collectively they were greasy and caused cars to skid.

So does anyone out there remember either of these events. I think both probably occurred. We'd like to pin down the years.

Janney
Reply
Anyone else find these to be important?
2 replies
Posted by Troutnut on Jul 26, 2006 in the species Belostoma flumineum
Last reply on Oct 9, 2006 by GONZO
Back when I was just starting to learn to fly fish and still kept quite a few fish, I autopsied the stomachs of a couple 17-19 inch brown trout in August and found them packed with these Belostoma flumineum bugs.

I haven't tied a reasonable imitation yet, but if those fish (from a few miles apart on the same river) were so fond of them an imitation is probably a great idea. It would be good to figure out where and when these things are important.

None of the fly fishing literatue I've seen has dealt with them at all, except for mentioning their existence in passing.
Reply