This is by far the most important species of Isonychia. Many angling books once split its credit with the species Isonychia sadleri and Isonychia harperi, but entomologists have since discovered that those are just variations of this abundant species.

See the main Isonychia page for more about these intriguing mayflies.

Time of year : Late May through October

This species has two distinct emergence peaks, once in late spring or early summer and again in the fall. It may be found on the water in lighter numbers at any time in between.

The first peak begins in the freestone mountain streams of Pennsylvania in early to mid-June. It reaches the Catskills in mid-June and continues through early July. The Upper Midwest and the northern ranges of the Appalachians peak from late June through mid-July.

The second peak usually comes in September, and those flies are more likely to emerge at midday than their Summer brethren.

Isonychia bicolor is only abundant on certain rivers, even in ideal regions. One river can be fantastic while the next drainage over shows no sign of Isonychia.

Time of day : Usually concentrated in evening with a peak near dusk, especially in Summer; may be sporadic all day

The duns are known for emerging by crawling out onto shore, and one of my streamside pictures shows the nymphal shucks they left behind on a rock. But they may also emerge on the surface in standard mayfly style. Many books attribute this to high water submerging the convenient places to crawl out of the water, and others attribute it to the size of the stream, but I think it is more likely a combination of these things, current speed, and geographic region. My home river in Wisconsin seems to have entirely midstream emergence, and some Catskill rivers display both.

When the duns emerge midstream, they're clumsy and make excellent targets for trout. Their heavy bodies ride low in the water, and they often make several failed attempts at flight before succeeding. Low-riding dry flies are good imitations of the placid duns, and heavily hackled patterns may be twitched and skittered to imitate the takeoff commotion.

I've had some of my best dry-fly fishing during sporadic hatches of Isonychia bicolor duns. Trout have an unusually ferocious appetite for them compared to other mayflies of similar size and profile, and they will often smash an imitation when no real duns are on the water.

The duns have pale off-white fore tarsi, which they often hold up on the air when they're resting. This feature has given them both the scientific name bicolor and one of their common names, the "White-Gloved Howdy."

Isonychia has some of the most interesting mayfly nymphs; see the main page for the genus for details, which do not really differ between species.

Some books have made a big deal over the strength of the stripe running down the back of Isonychia bicolor nymphs, because it was a confusing identification characteristic used to separate them from Isonychia sadleri. Because the two species are now synonyms, the confusion is no longer needed--they're all Isonychia bicolor. However, anglers tying nymph imitations should collect some local specimens before putting bright white stripes down the backs of all their flies. In some populations the stripes are only a little bit lighter than the rest of the body and don't run its whole length. In others, the stripes are indeed vivid enough to warrant the prettier imitation.

The size and color of Isonychia bicolor adults may vary throughout the season on a single river, so one should catch specimens from time to time and check them against their imitations. 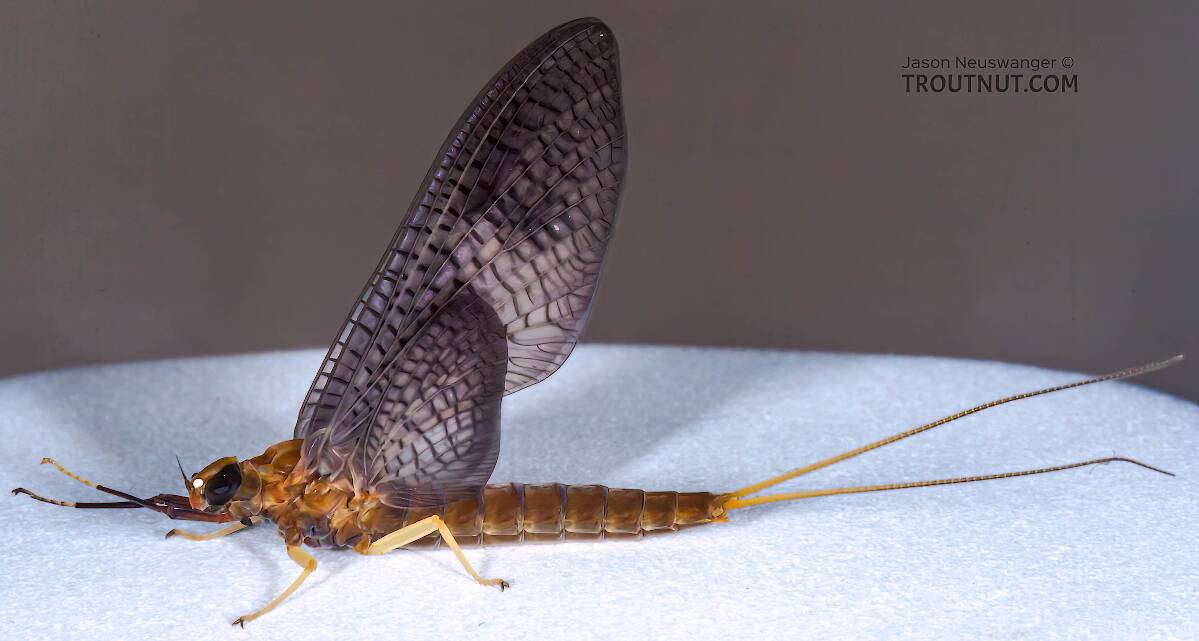 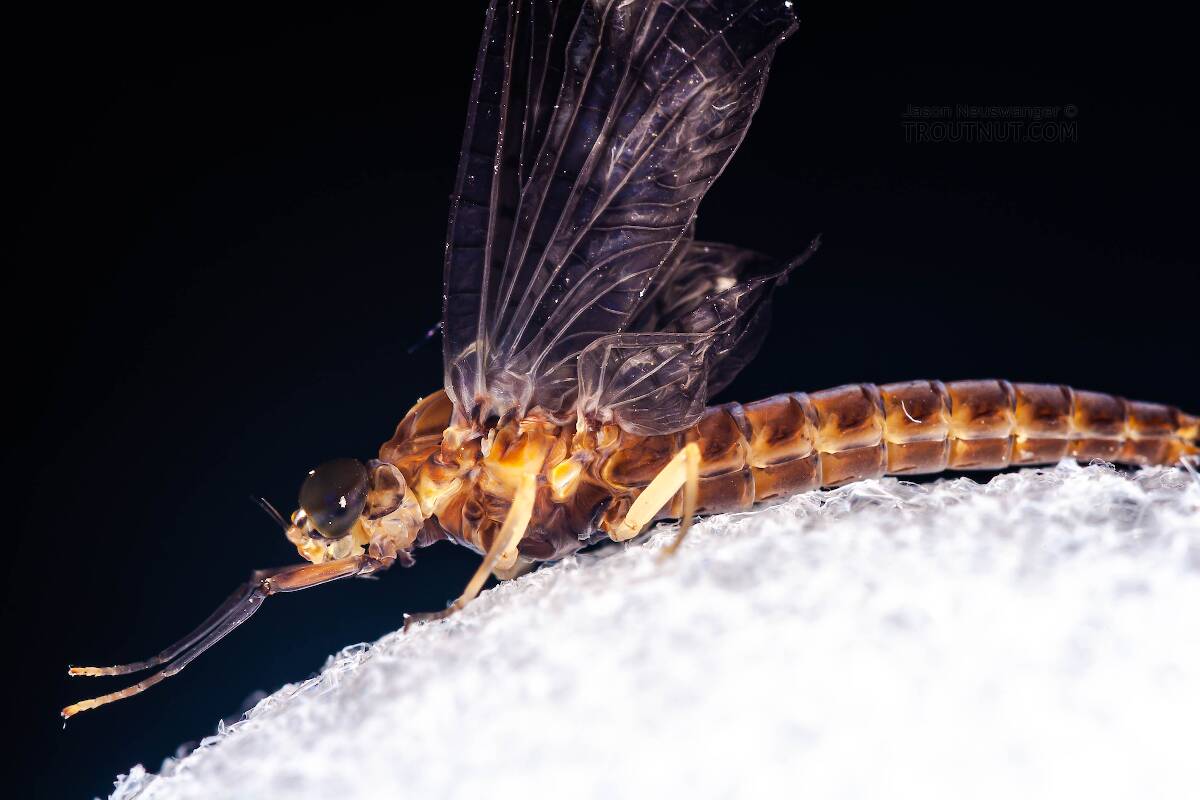 I thought this dun was worth photographing, even though she's in pretty bad shape, because she shows something I haven't seen in Isonychia elsewhere. The bright stripe down the back which is normally present only in the nymph carried over to the dun in this one.
Collected May 26, 2007 from Penn's Creek in Pennsylvania
Added by Troutnut on June 4, 2007
Female Isonychia bicolor (Mahogany Dun) Mayfly Dun
6 Pictures 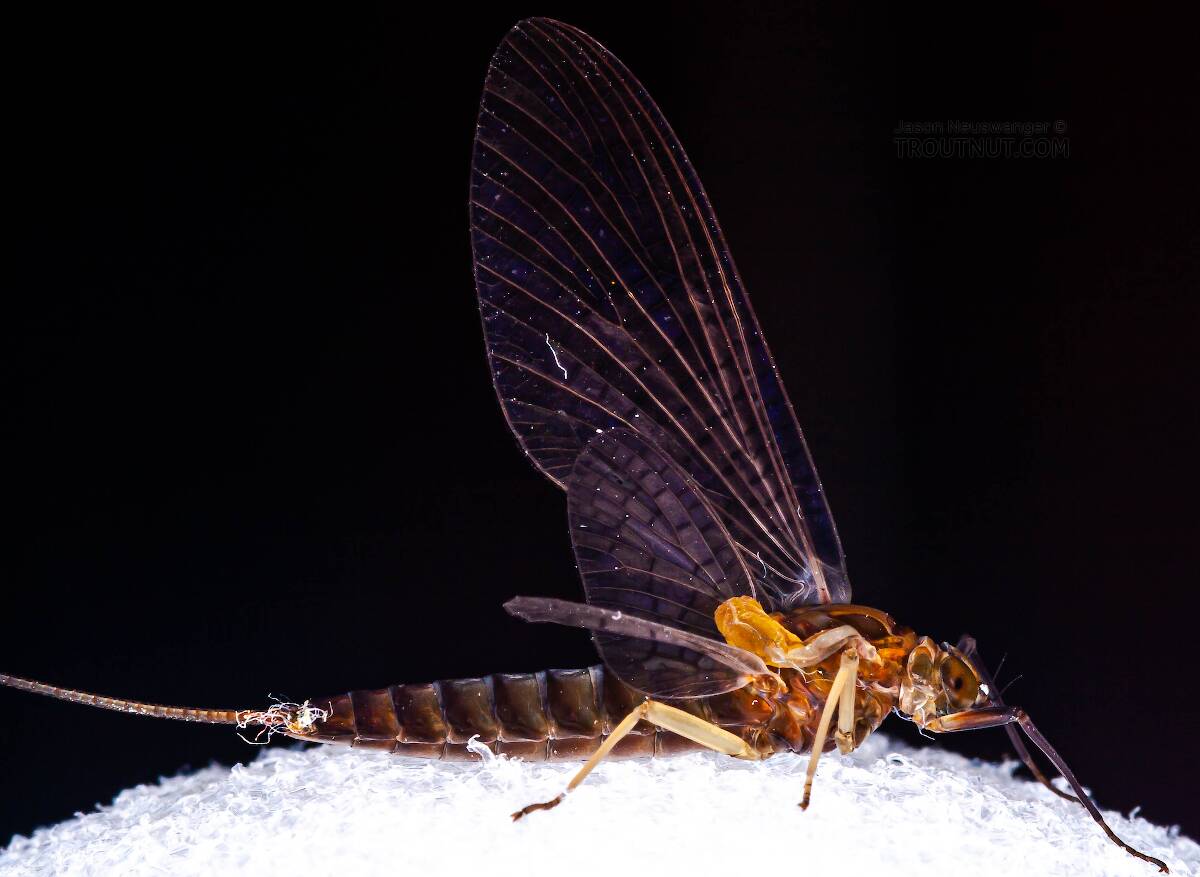 This is a naturally crippled female Isonychia bicolor dun. One of her main wings came out as a deformed, crumpled yellow object. I found her flopped over on her side struggling on the surface of a small stream.
Collected August 22, 2006 from the West Branch of Owego Creek in New York
Added by Troutnut on August 23, 2006
Female Isonychia bicolor (Mahogany Dun) Mayfly Dun
3 Pictures 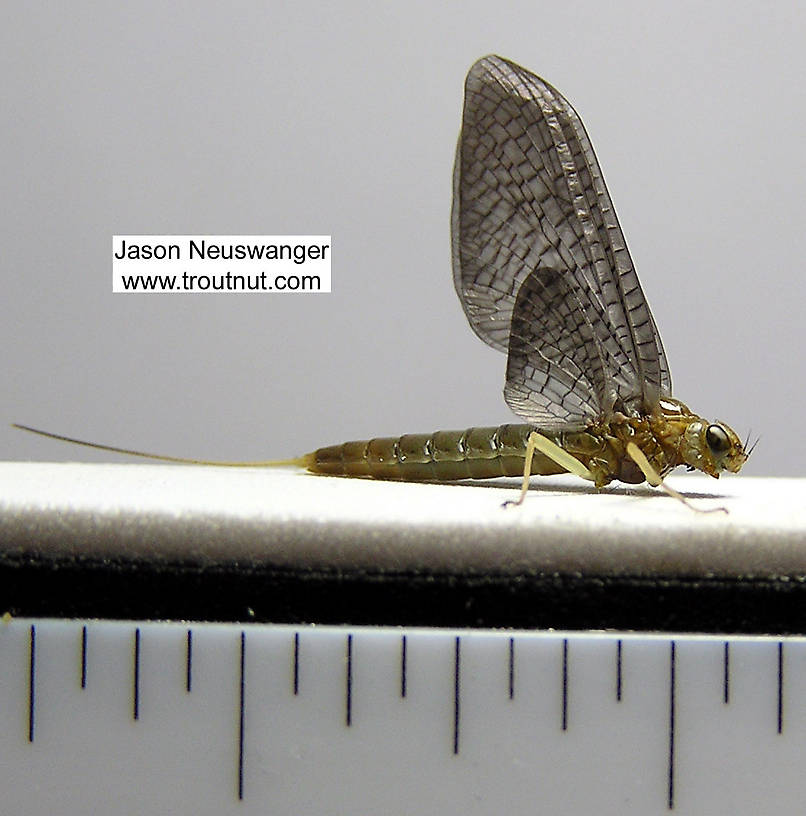 Collected September 2, 2004 from the Beaverkill River in New York
Added by Troutnut on January 25, 2006 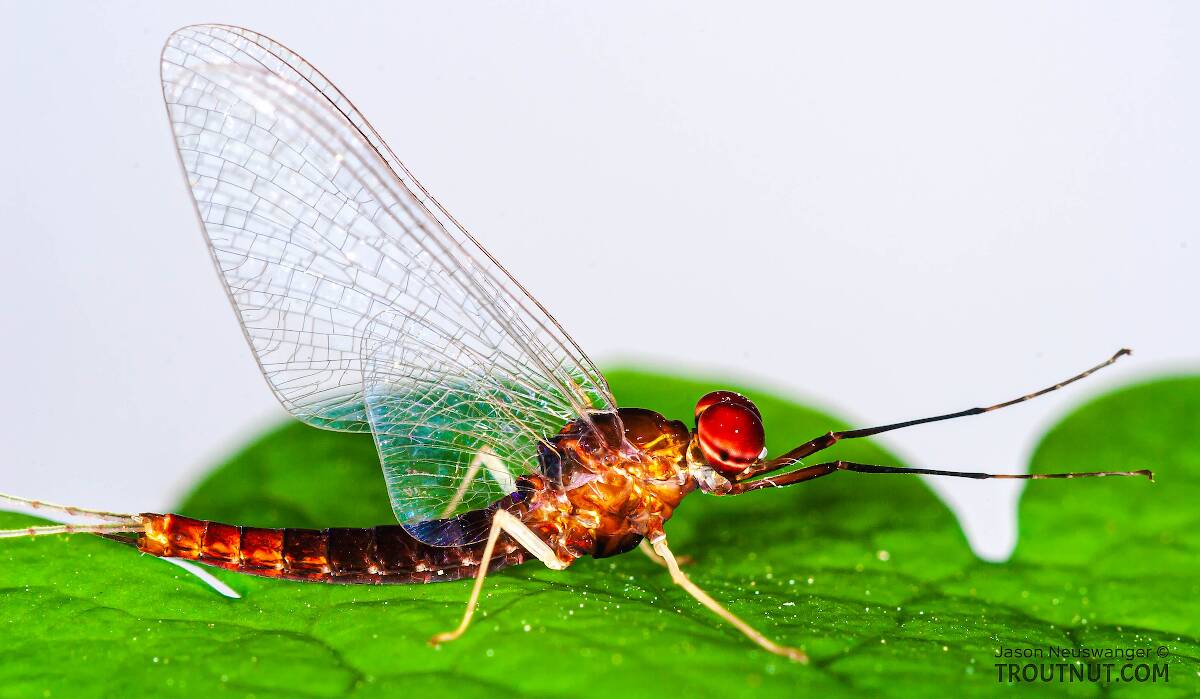 I got several really nice pictures of this spinner. I also collected a female on the same trip.
Collected August 9, 2006 from the West Branch of Owego Creek in New York
Added by Troutnut on August 11, 2006 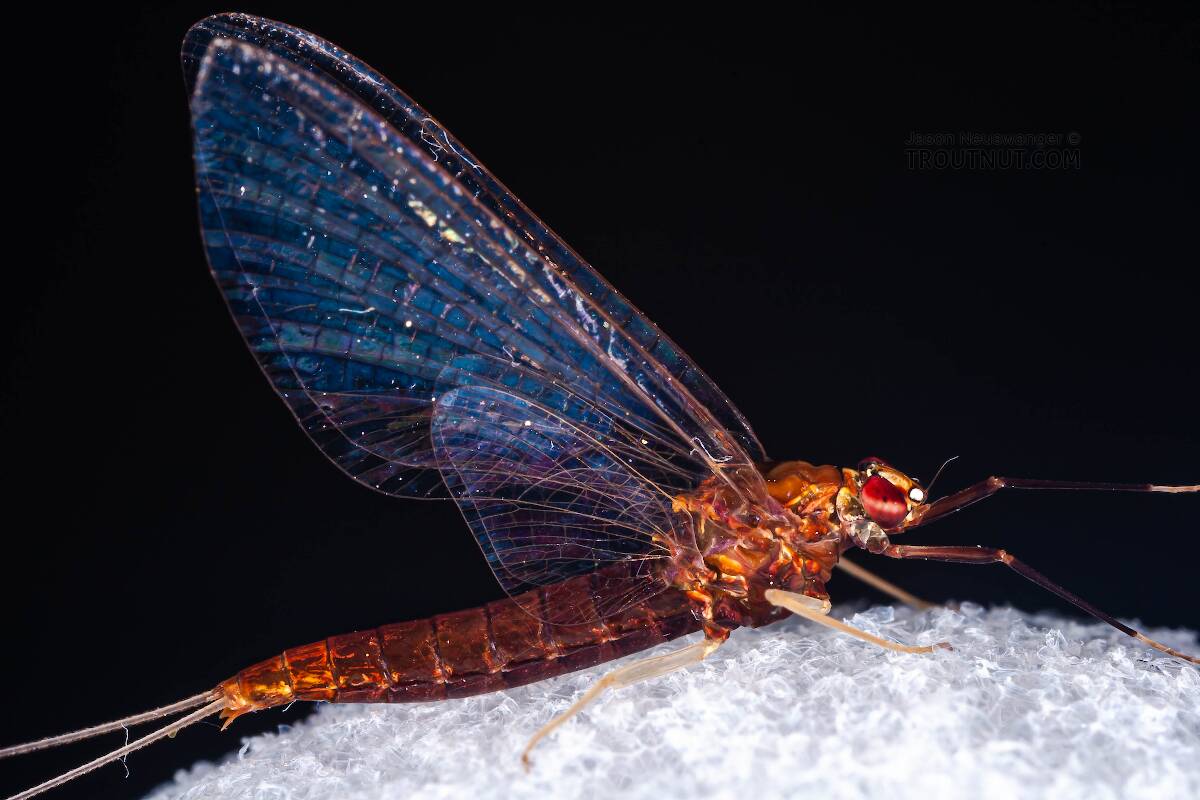 I collected this female together with a male.
Collected August 9, 2006 from the West Branch of Owego Creek in New York
Added by Troutnut on August 11, 2006 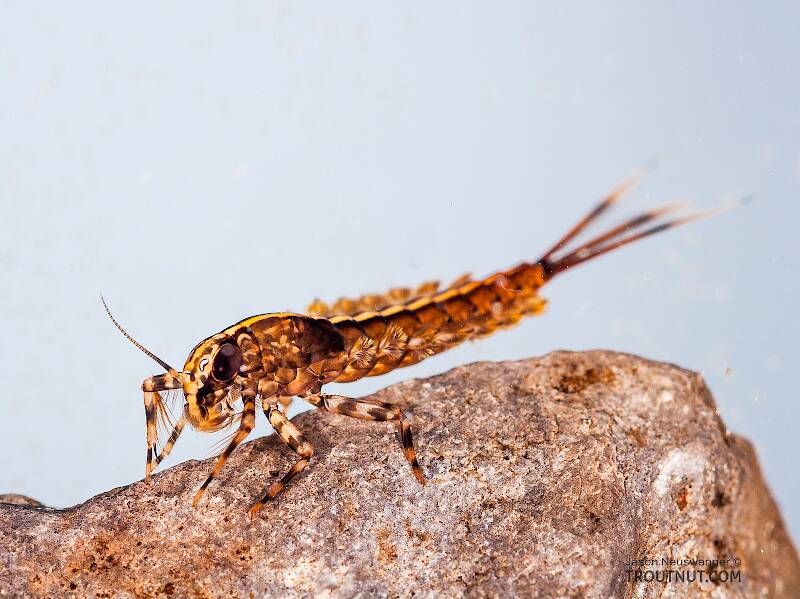 This Isonychia bicolor nymph from the Catskills displays the prominent white stripe sometimes characteristic of its species. This is the first such specimen I've photographed, because members of the same species in the Upper Midwest have a more subdued stripe (and were once thought to be a different species, Isonychia sadleri). The striking coloration on this eastern nymph is more appealing.
Collected April 19, 2006 from the Beaverkill River in New York
Added by Troutnut on April 21, 2006
Isonychia bicolor (Mahogany Dun) Mayfly Nymph
5 Pictures 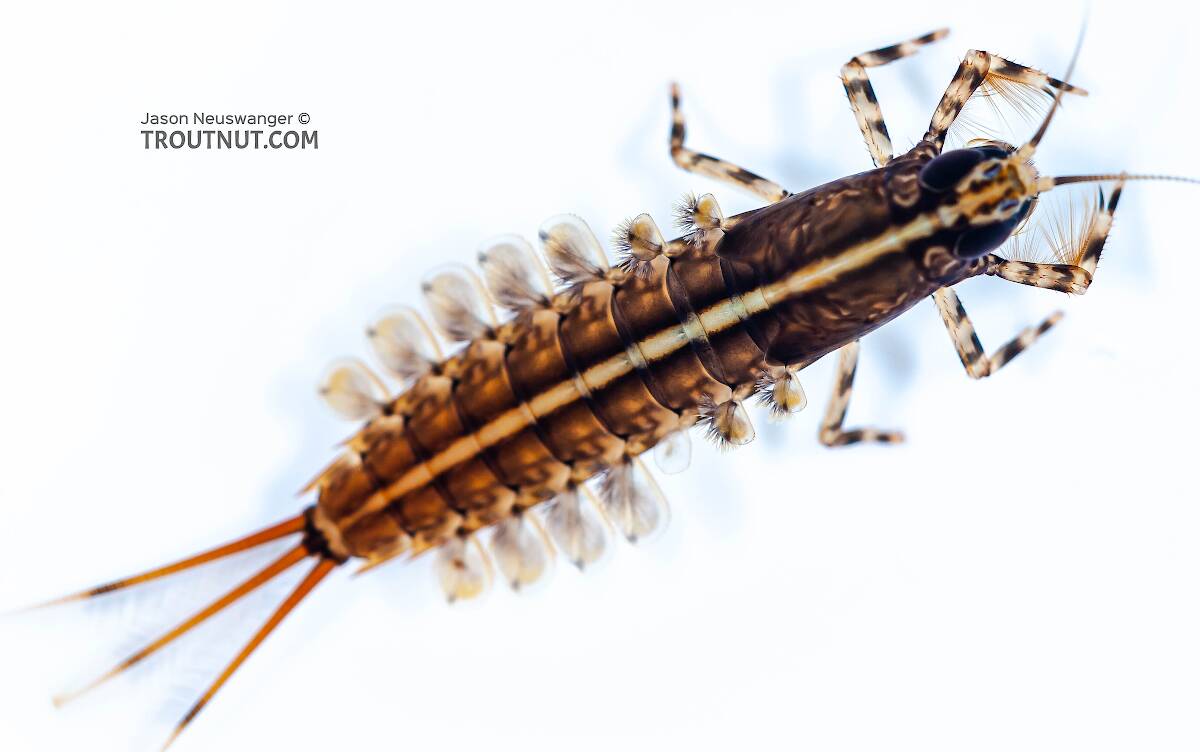 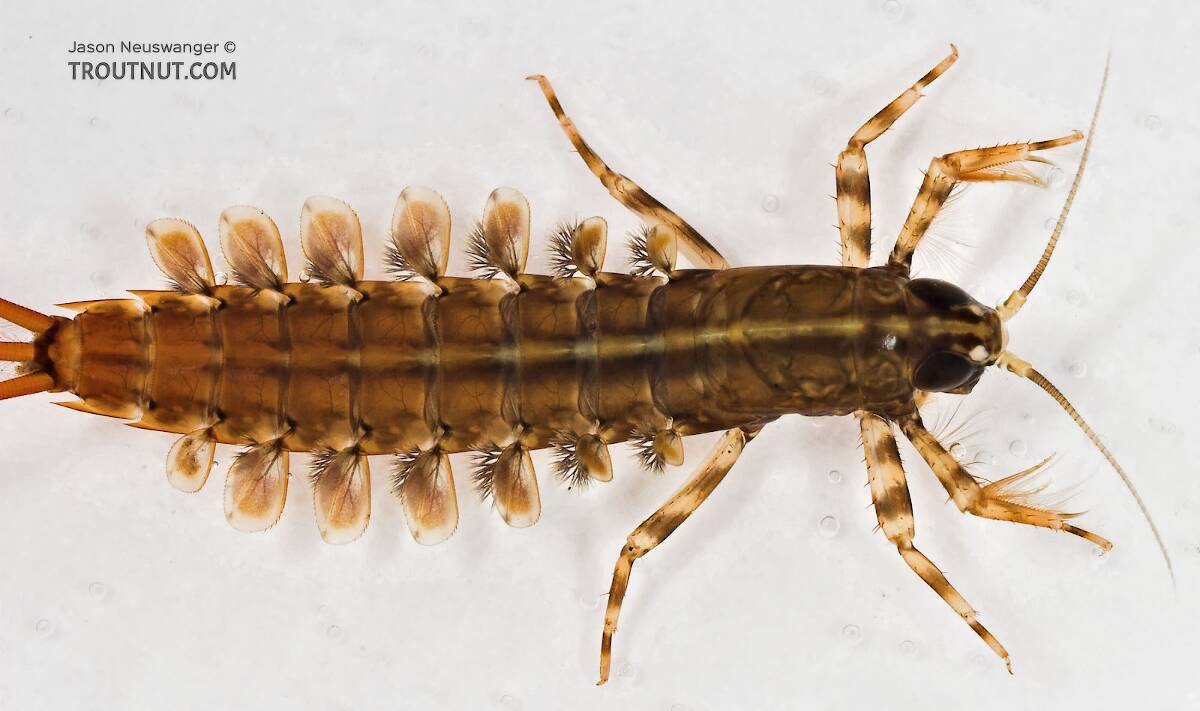 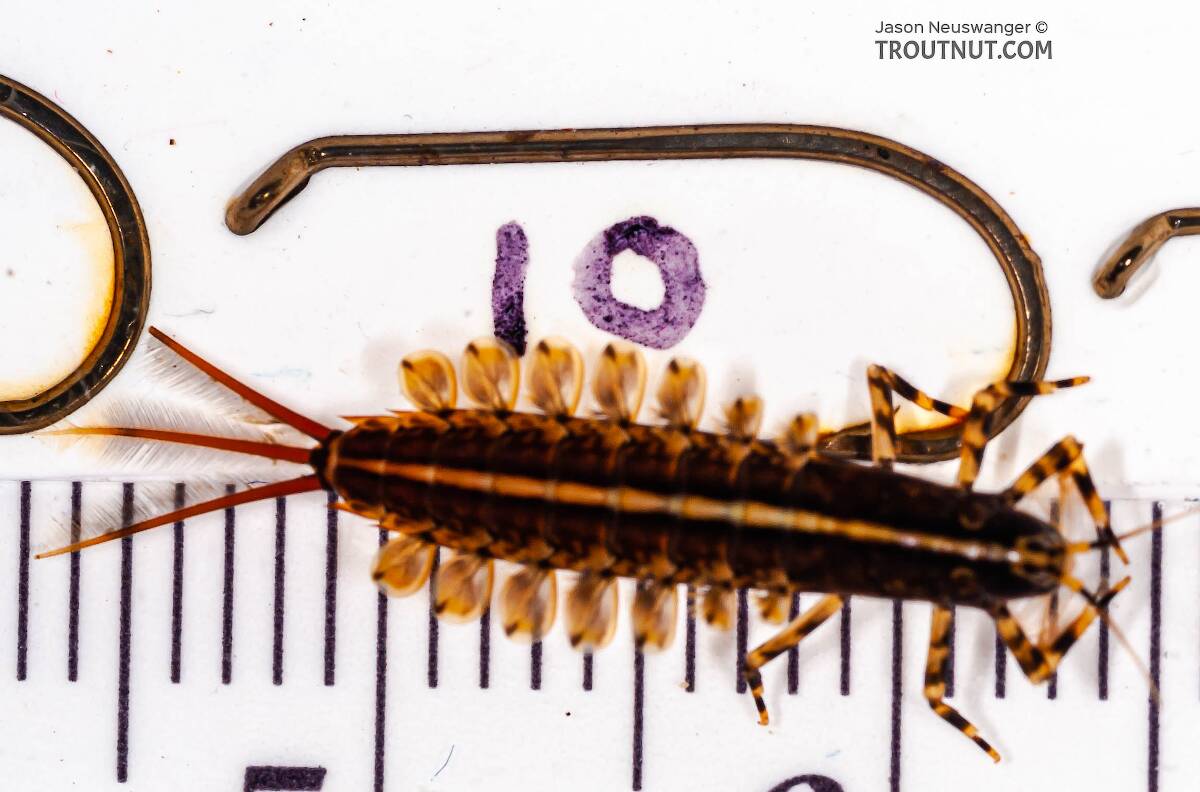 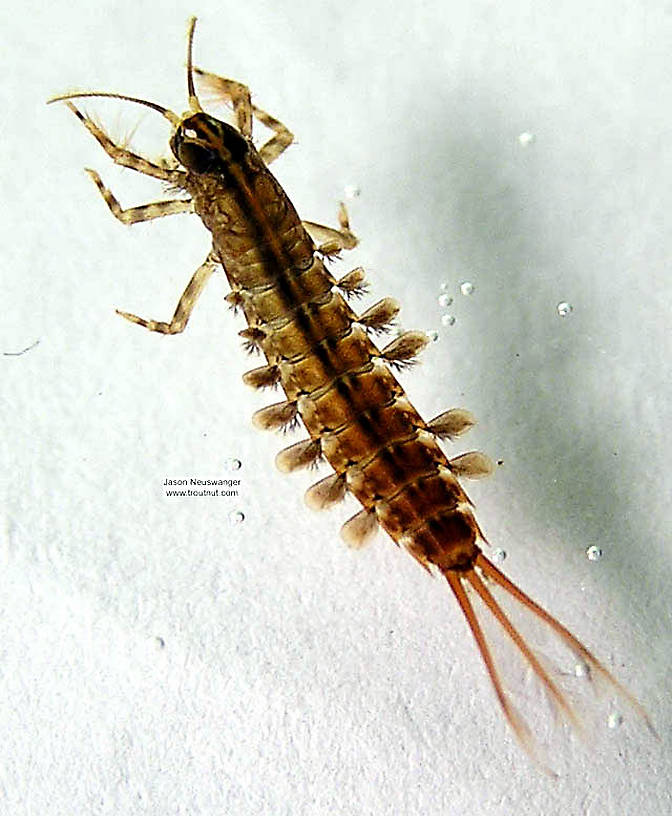 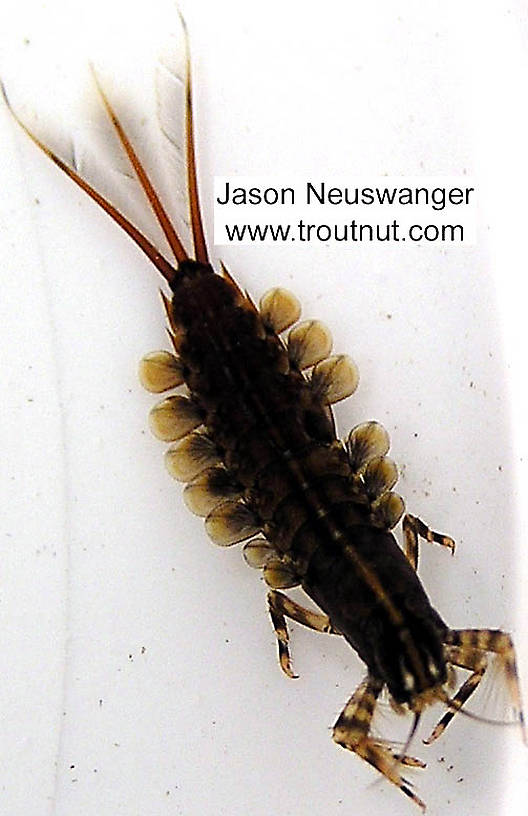 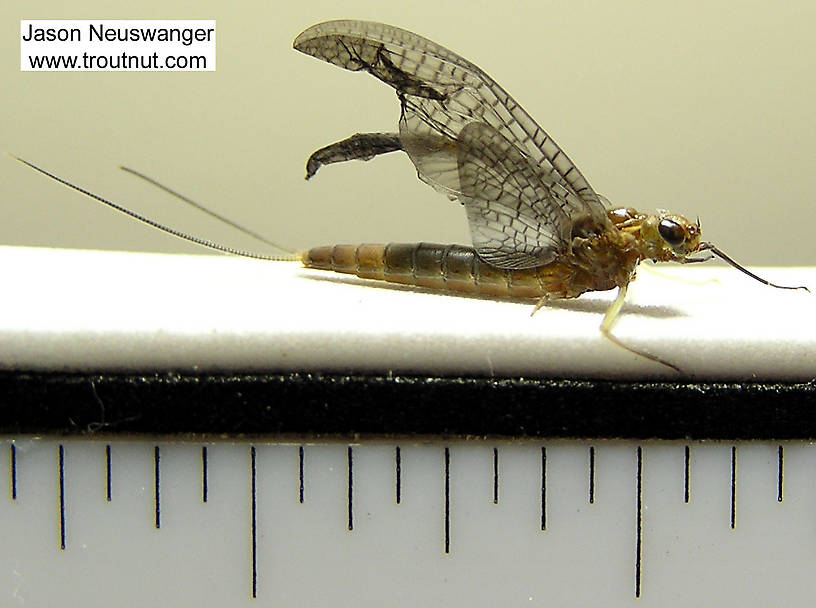 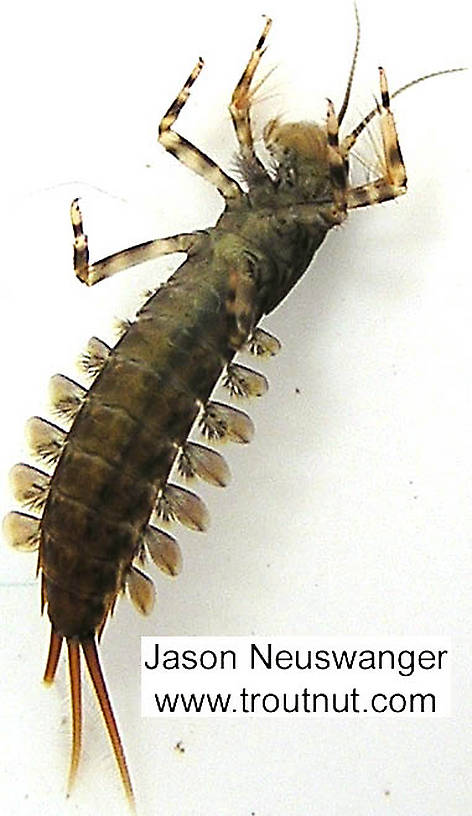 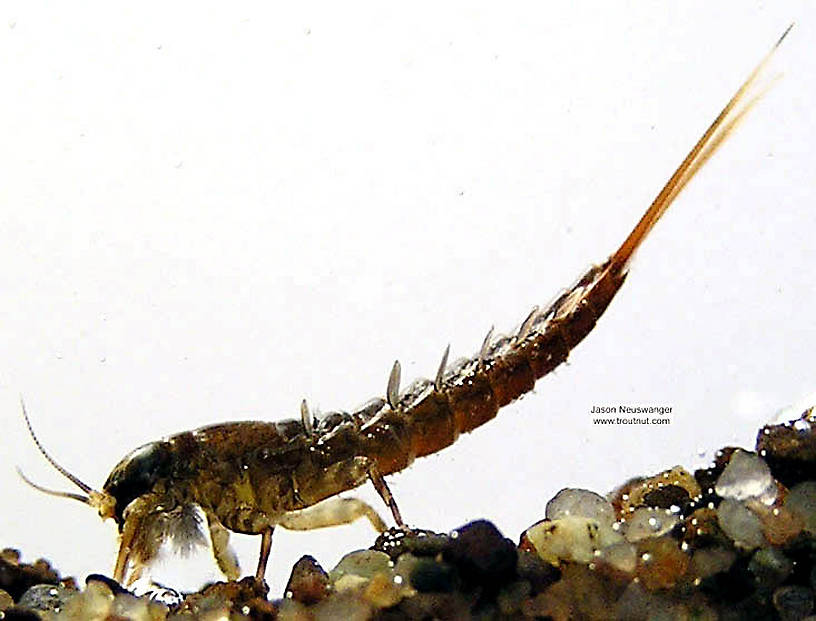 These three Isonychia nymphs show the variety within the species from a single day at a single collection site.
Collected January 14, 2004 from the Namekagon River in Wisconsin
Added by Troutnut on January 25, 2006
Isonychia bicolor (Mahogany Dun) Mayfly Nymph
2 Pictures 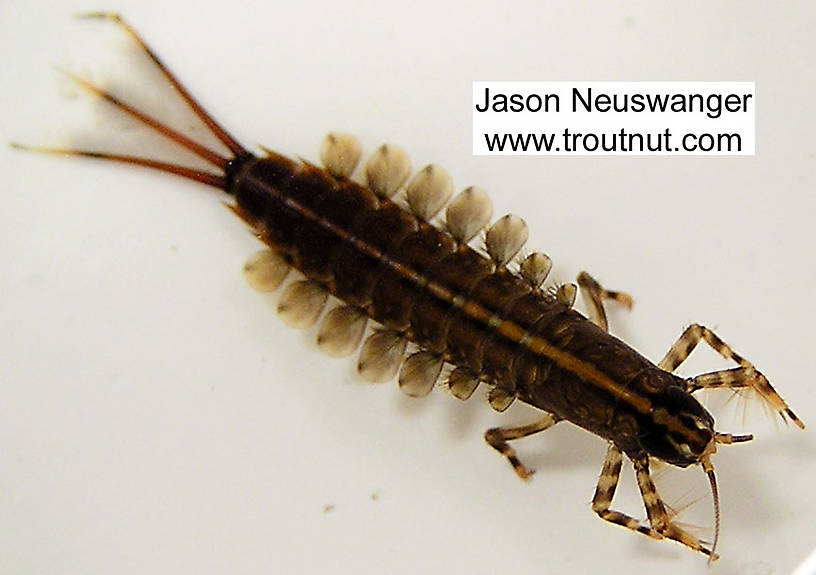 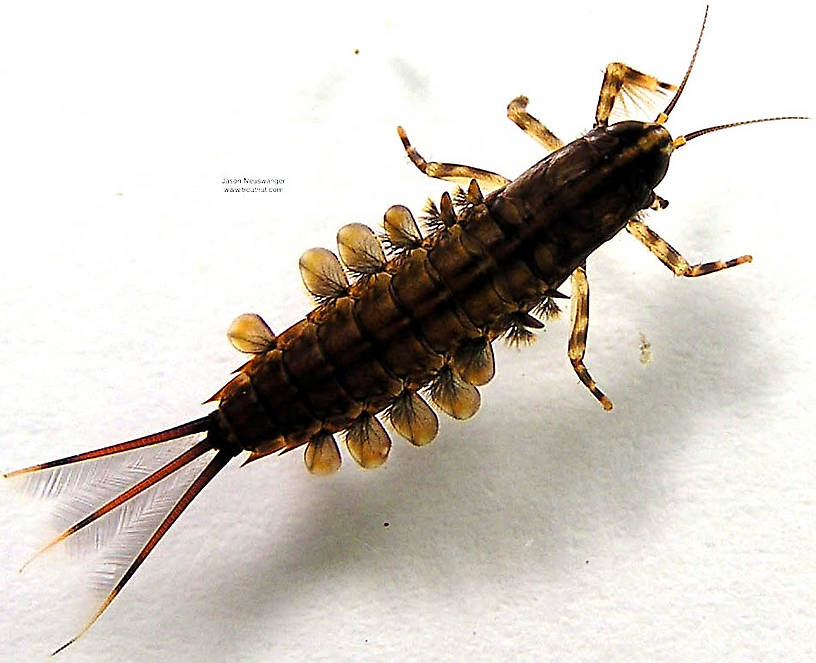 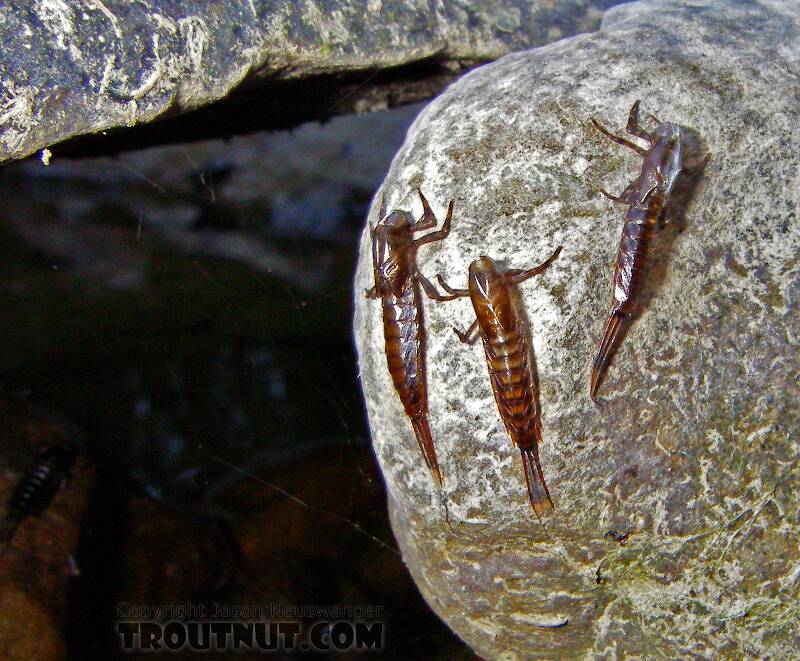 Closeup of some recently emerged Isonychia bicolor nymphs from a small stream.
In this picture: Mayfly Species Isonychia bicolor (Mahogany Dun).
Taken August 9, 2006 from the West Branch of Owego Creek in New York
Added by Troutnut on August 10, 2006
View Fullsize 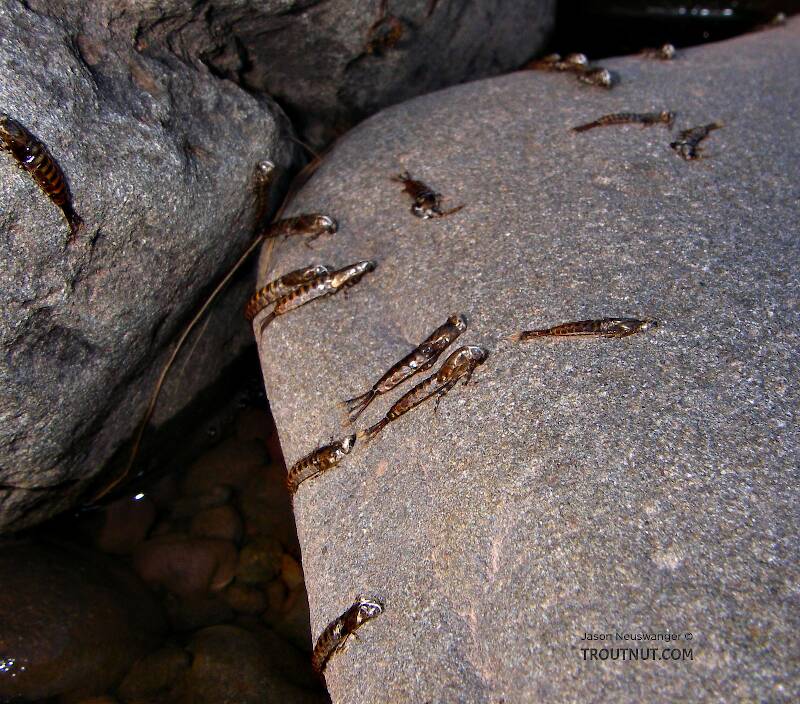 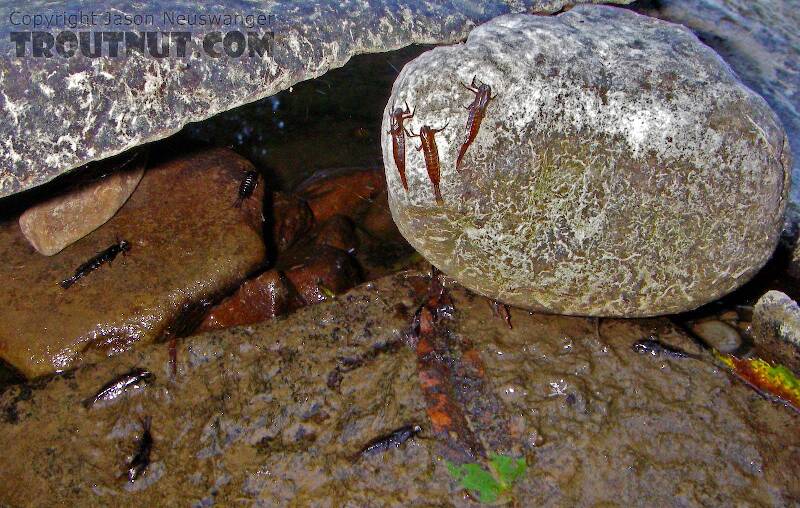 Several Isonychia bicolor nymphs had recently crawled out onto these rocks to emerge, leaving behind their telltale shucks.
In this picture: Mayfly Species Isonychia bicolor (Mahogany Dun).
Taken August 9, 2006 from the West Branch of Owego Creek in New York
Added by Troutnut on August 10, 2006
View Fullsize 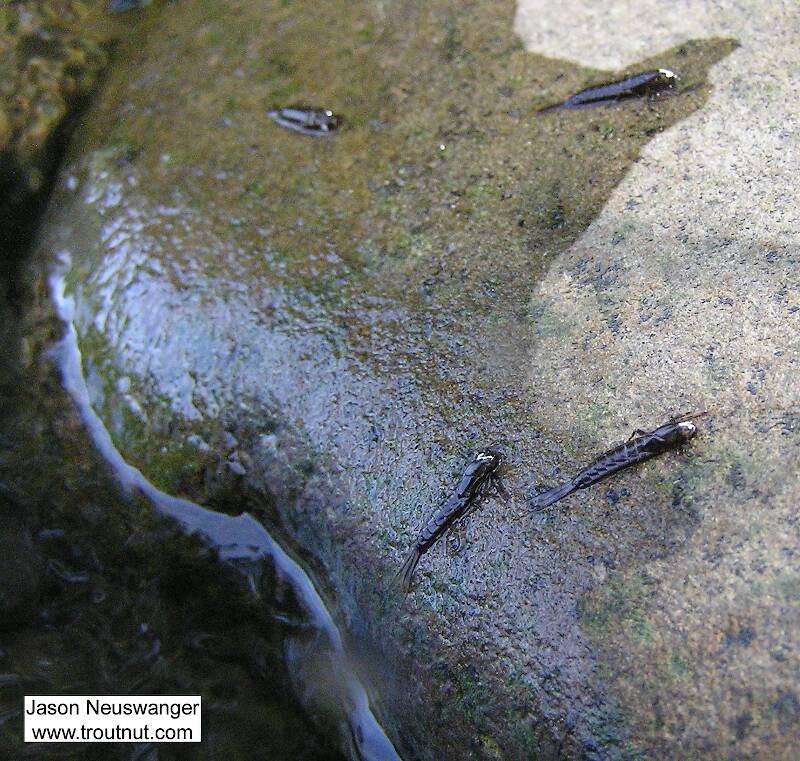 Here are the empty nymphal cases of Isonychia bicolor mayflies which hatched in early fall in the Catskills by crawling out onto a rock.
In this picture: Mayfly Species Isonychia bicolor (Mahogany Dun).
Taken August 24, 2004 from the Beaverkill River in New York
Added by Troutnut on January 17, 2006
View Fullsize 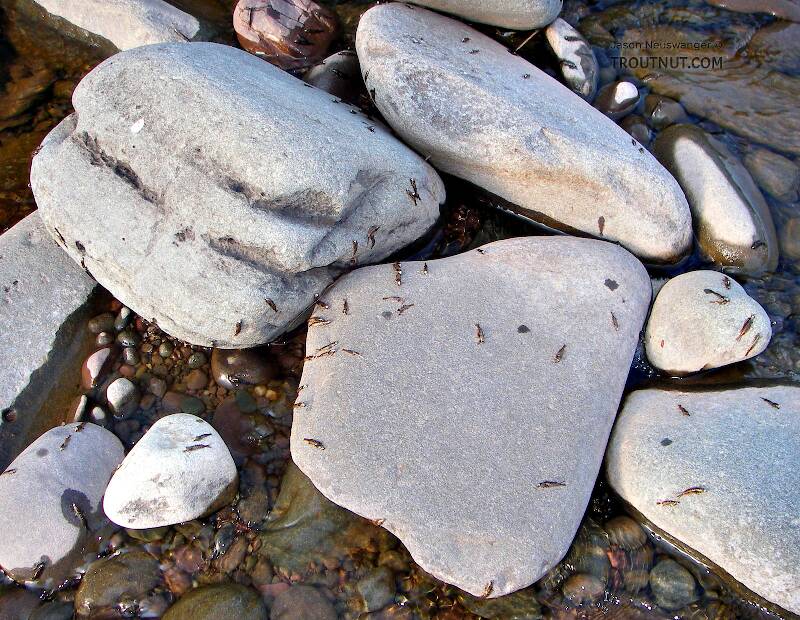 This is just about the most Isonychia bicolor shucks I've ever seen on the rocks, and appropriately enough they're on the river where Art Flick described them in his Streamside Guide.
In this picture: Mayfly Species Isonychia bicolor (Mahogany Dun).
Taken September 7, 2006 from Schoharie Creek in New York
Added by Troutnut on October 4, 2006

These nymphs may be the best swimmers of all North American mayflies.