There are many species in this genus of mayflies, and some of them produce excellent hatches. Commonly known as Blue Quills or Mahogany Duns, they include some of the first mayflies to hatch in the Spring and some of the last to finish in the Fall.

In the East and Midwest, their small size (16 to 20, but mostly 18's) makes them difficult to match with old techniques. In the 1950s Ernest Schwiebert wrote in Matching the Hatch:

"The Paraleptophlebia hatches are the seasonal Waterloo of most anglers, for without fine tippets and tiny flies an empty basket is assured."

Fortunately, modern anglers with experience fishing hatches of tiny Baetis and Tricorythodes mayflies (and access to space-age tippet materials) are better prepared for eastern Paraleptophlebia. It's hard to make sense of so many species, but only one is very important and others can be considered in groups because they often hatch together:

In the West, it is a different story. For starters the species run much larger and can be imitated with flies as large as size 12, often size 14, and rarely smaller than 16. Another difference is the West has species with tusks! Many anglers upon first seeing them think they are immature burrowing nymphs of the species Ephemera simulans aka Brown Drake. With their large tusks, feathery gills, and slender uniform build, it's an easy mistake to make. Using groups again:

Though usually noted for migrating to the shallows to hatch, most species at times emerge in classic mayfly style on the surface and ride the water for a while before flying away. This is exacerbated by the inclement weather they often hatch in. Floating nymph patterns and emergers are very effective at these times. The hatch may last for a few hours each day.

George Edmunds in Mayflies of North and Central America documented that Paraleptophlebia mayflies have been observed to emerge by crawling out onto shore when the water is high in the Spring, but since he gives no further details about which species do this it is reasonable to assume it's generic. Knopp and Cormier note in Mayflies: An Angler's Study of Trout Water Ephemeroptera the same behavior.

According to Edmunds, the females will mate more than once and often proceed to shoreline foliage when finished with ovipositing as opposed to dying spent on the water. The males start the swarms first, often well before. They are often observed along the shoreline dipping from six to two feet and rising again. On occasion, many males for unknown reasons drop to the water at this time and become trapped in the meniscus. When the females finally arrive, they join them quickly at the top, copulate during the four foot fall, and just as quickly make short dives to either dip their abdomens into the water or land on the water to lay their eggs. Then it's up and back at it until they're finished. Edmunds reports that they will repeat this cycle as many as three times before they occasionally die spent on the water or more often head back to the bushes. This is good information for the angler to note.

Although classified as crawlers, Paraleptophlebia nymphs look more like little burrowers (especially the tusked variety) and swim very well. They are generally tolerant of faster water than Leptophlebia and inhabit pockets in riffles as well as moderate runs.

Specimens of the Mayfly Genus Paraleptophlebia 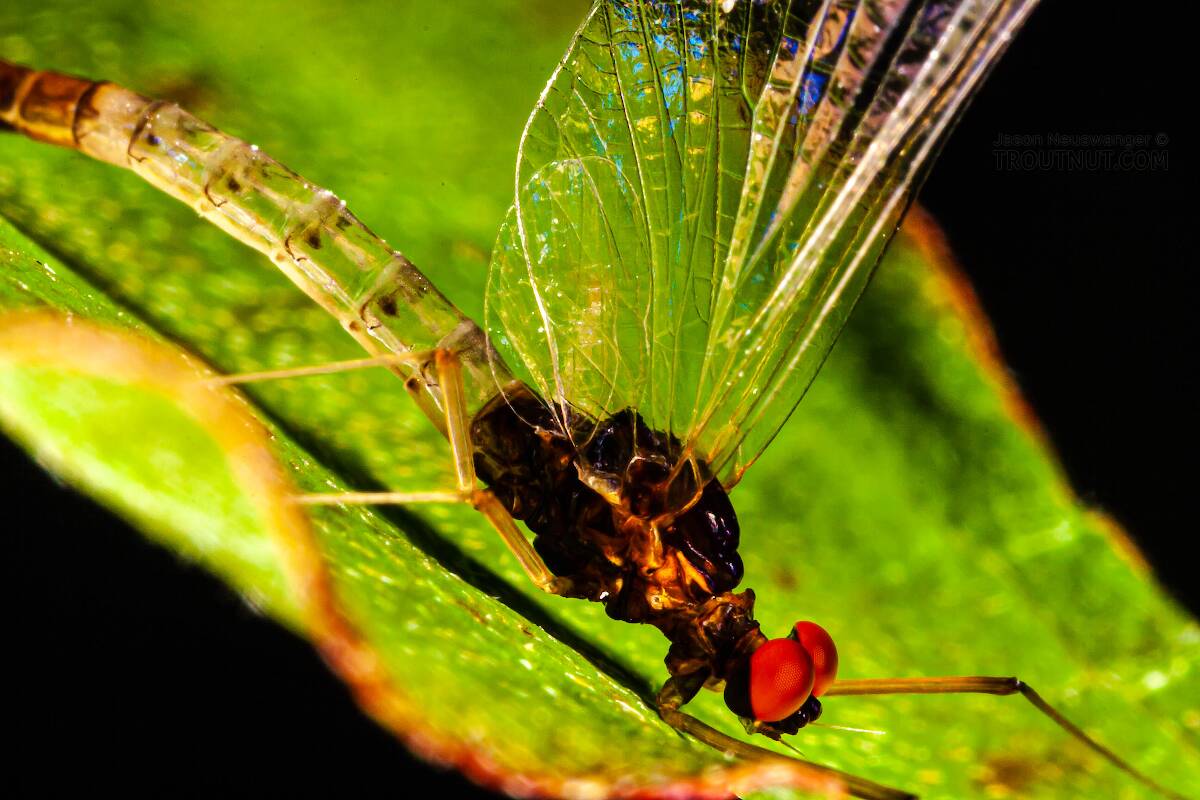 I wasn't actually fishing the river where I caught this one. I was just scouting, didn't like the look of the water, and as I was walking back to the car this little dun landed on my vest. Why can't they all be so easy to collect?
Collected September 8, 2006 from the East Branch of the Delaware River in New York
Added by Troutnut on October 4, 2006
Male Paraleptophlebia sculleni Mayfly Spinner
13 Pictures 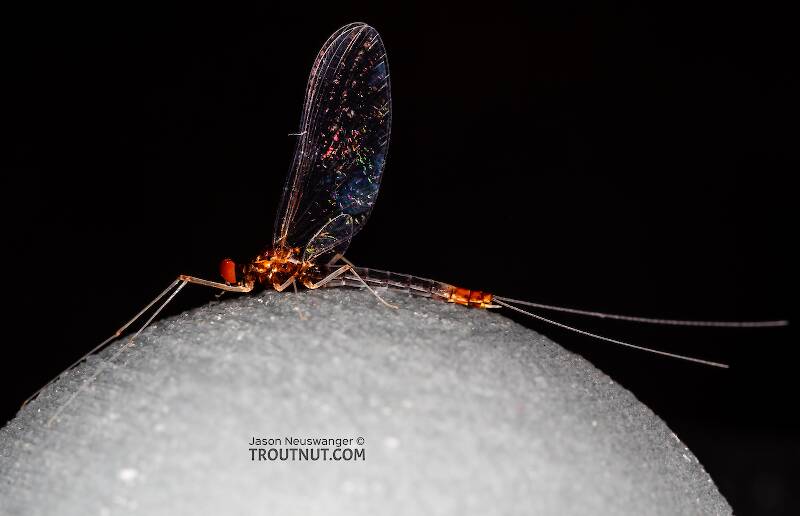 This specimen (and a few others I collected but didn't photograph) appear to represent the first finding of Paraleptophlebia sculleni outside the Oregon Cascades, although it is not a monumental leap from there to the Washington Cascades. The key characteristics are fairly clear.
Collected July 25, 2019 from Mystery Creek #249 in Washington
Added by Troutnut on July 26, 2019
Male Paraleptophlebia sculleni Mayfly Spinner
10 Pictures 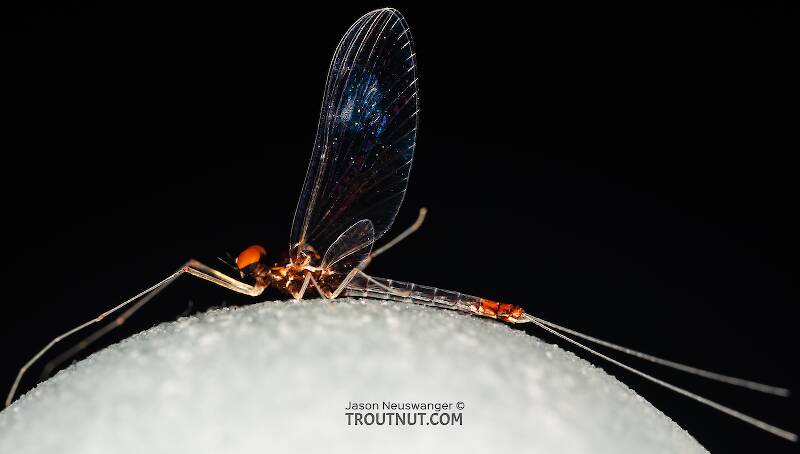 For a species not yet reported in my state, I've been surprised to find these in two different locations lately. I was tempted to think they're the more common Paraleptophlebia debilis, but the characteristic big dorsal bump on the claspers just isn't present.
Collected August 4, 2019 from the Middle Fork Snoqualmie River in Washington
Added by Troutnut on August 5, 2019
Male Paraleptophlebia bicornuta (Large Slate-Winged Mahogany Dun) Mayfly Spinner
3 Pictures 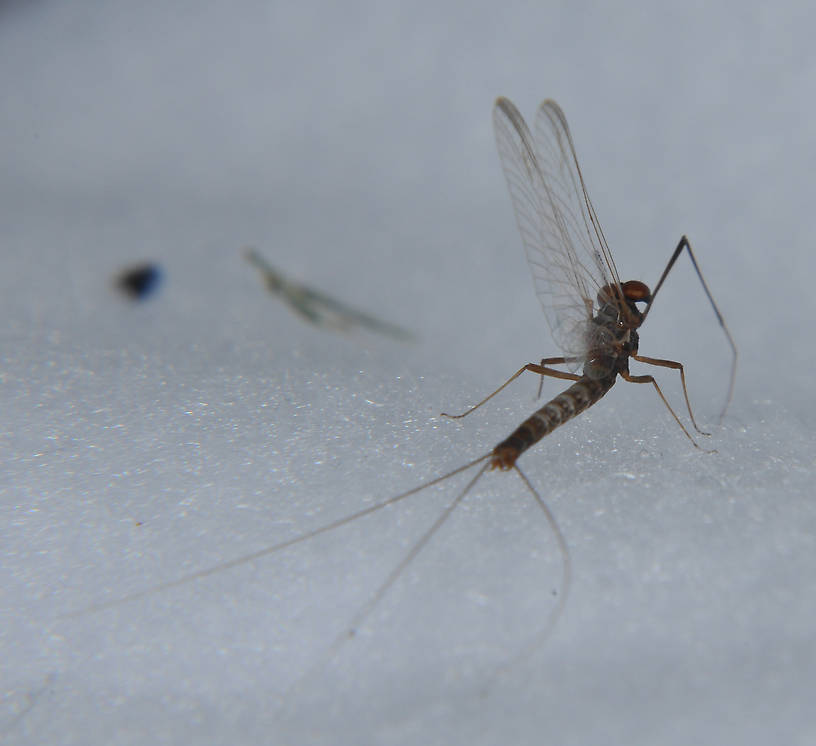 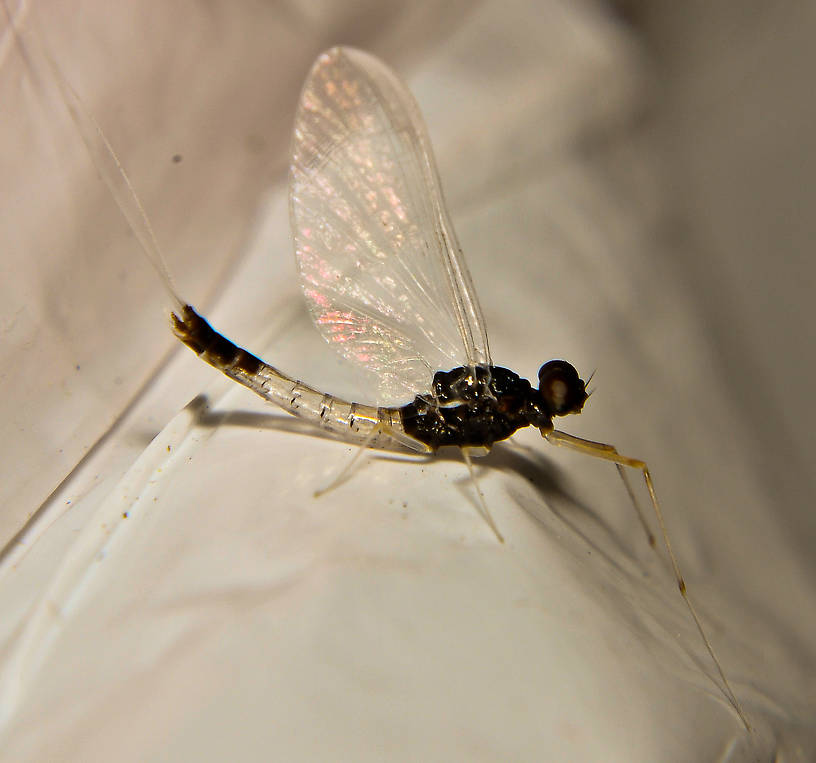 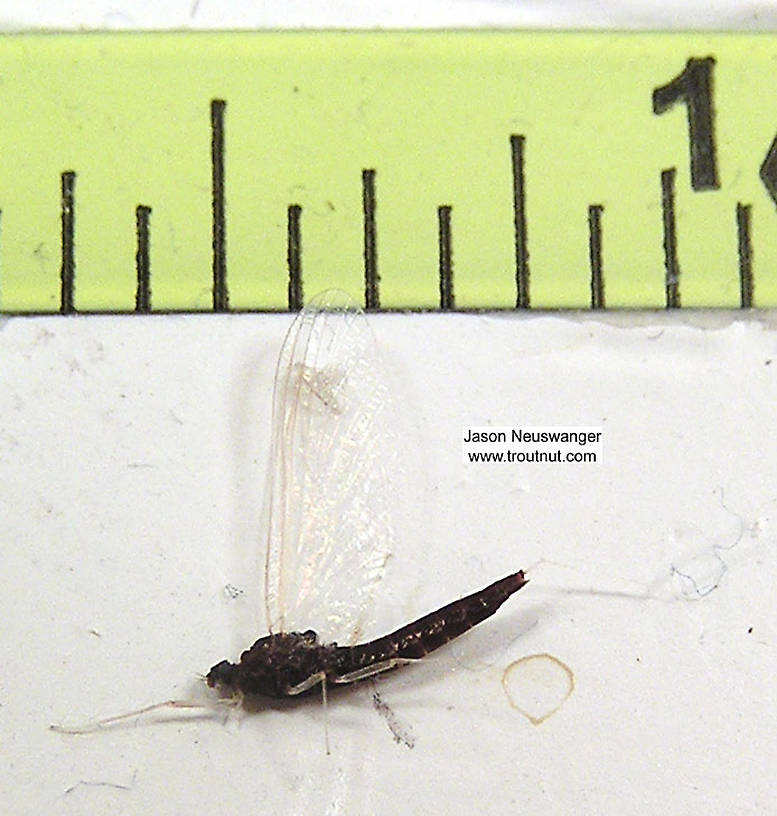 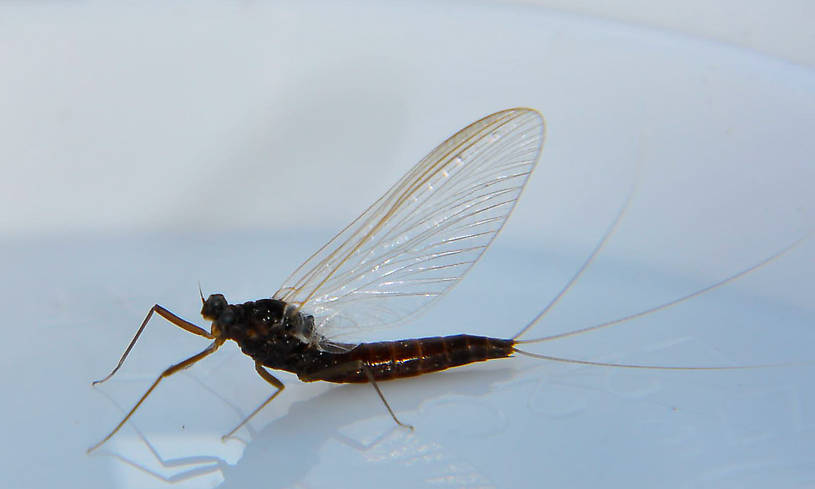 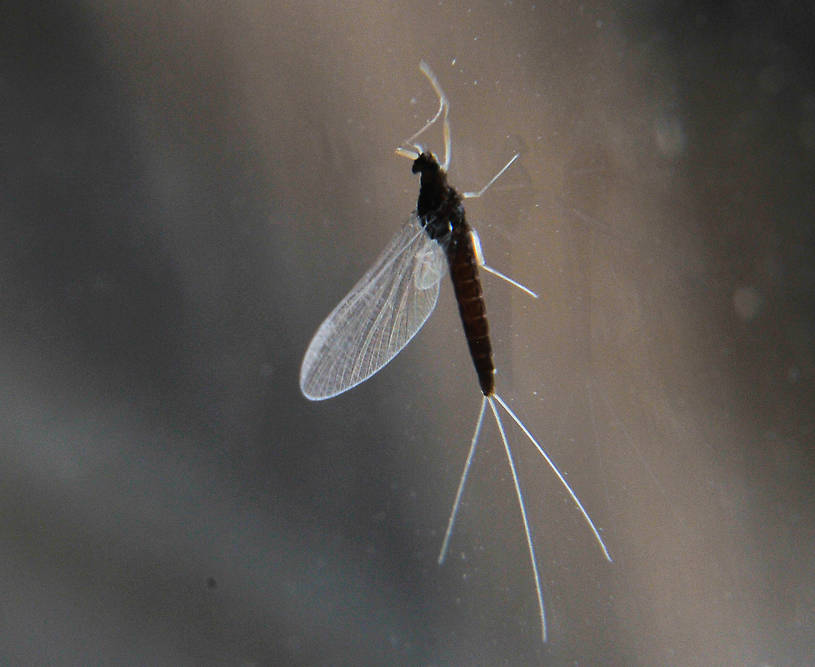 This female is probably P. heteronea or P. memorialis since these are the two species collected during the last two weeks. It is interesting that the females are this very dark brown color while the males are lighter in color.
Collected June 29, 2011 from the Touchet River in Washington
Added by Bnewell on June 29, 2011 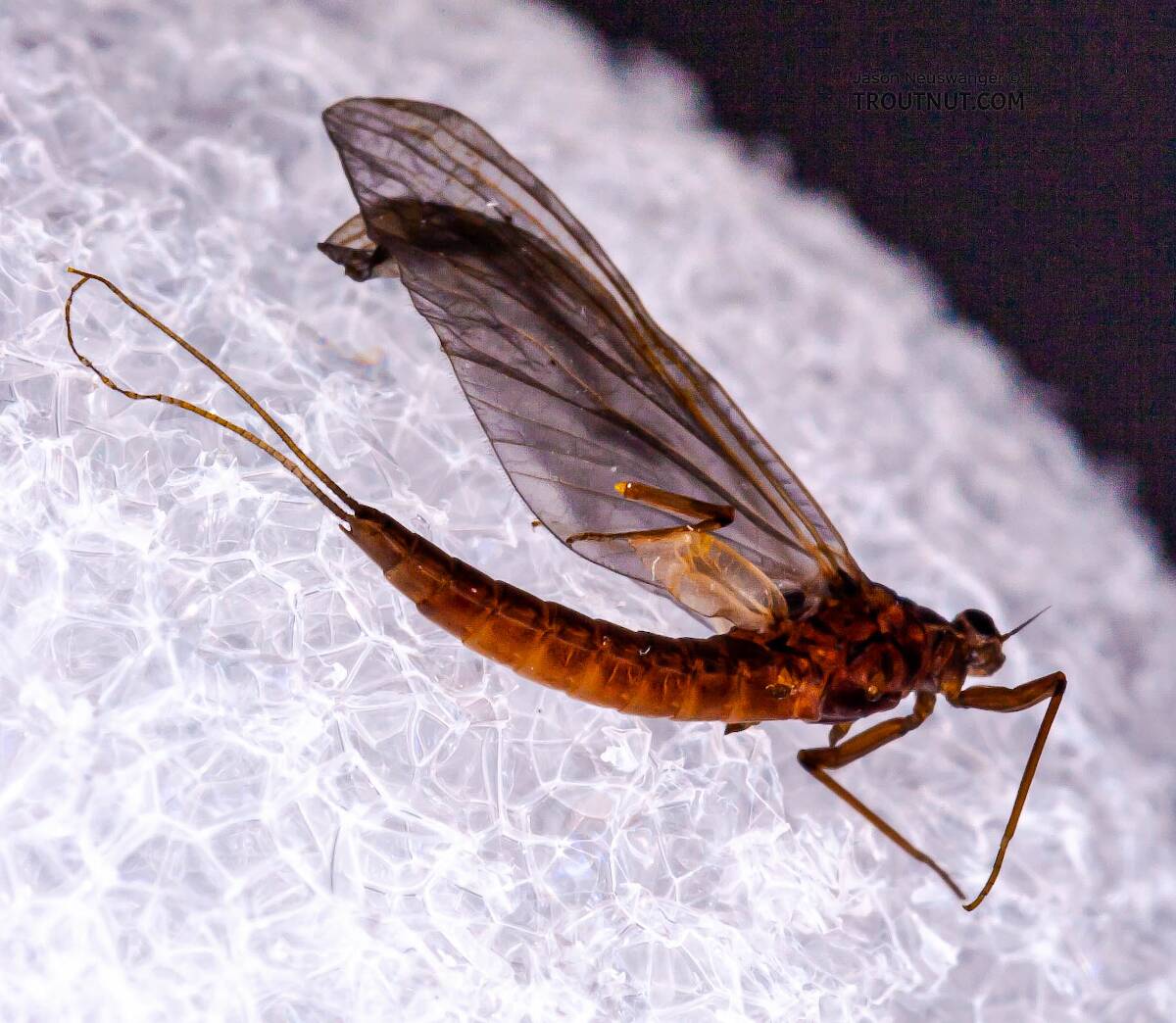 I really hoped to catch some good blue quill specimens on this trip, but they are very fragile mayflies and this one was in the best condition of the few that I caught after I drove them home to my camera. It may not be pretty, but you get an idea of the size/shape/color anyway.
Collected April 19, 2006 from the Beaverkill River in New York
Added by Troutnut on April 21, 2006
Female Paraleptophlebia (Blue Quills) Mayfly Dun
5 Pictures 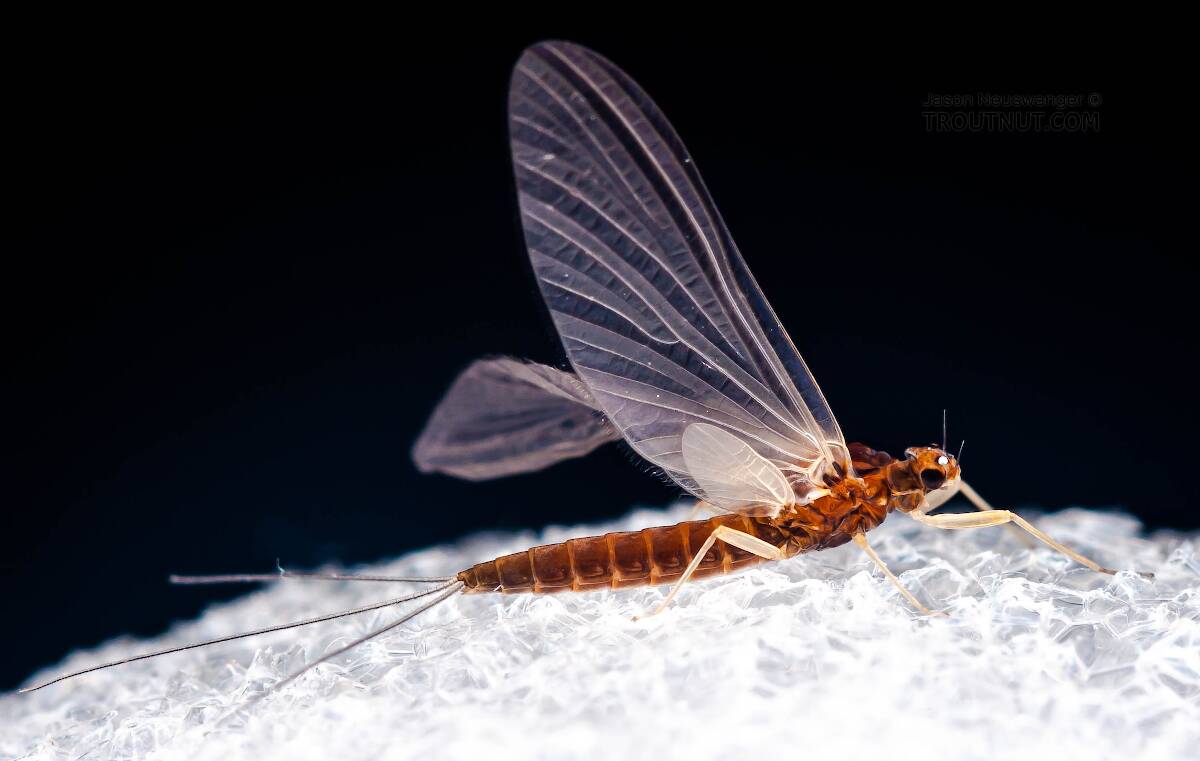 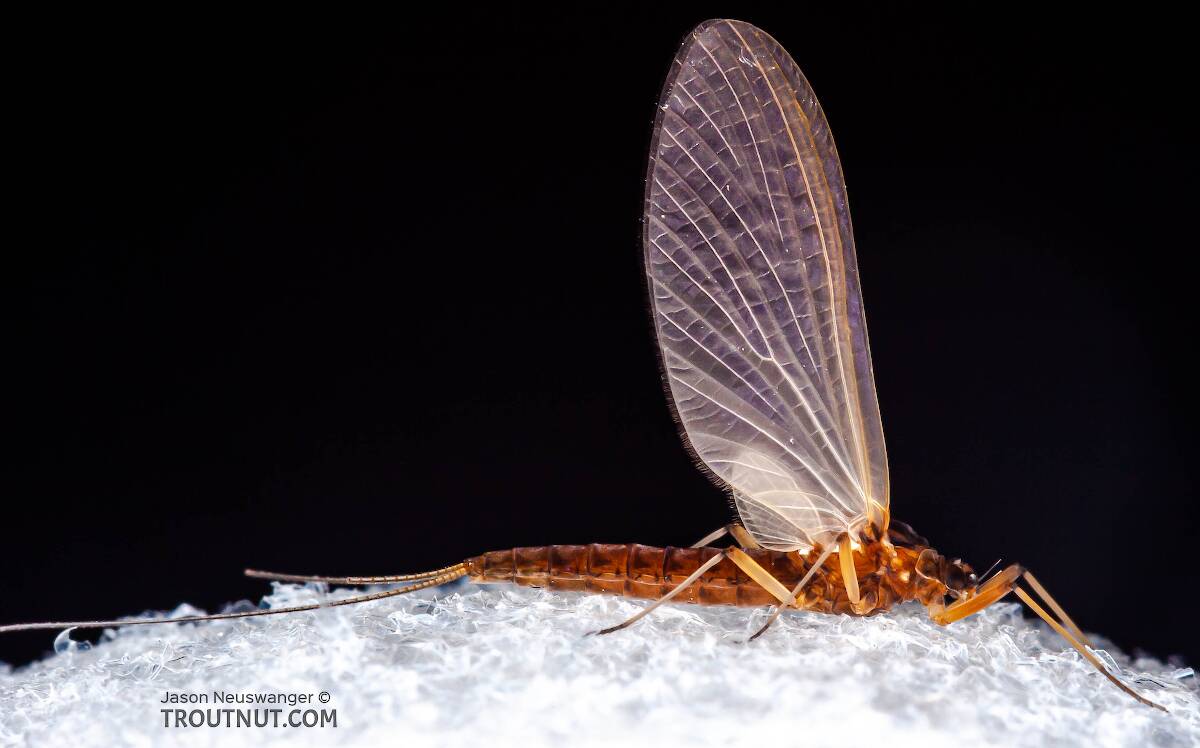 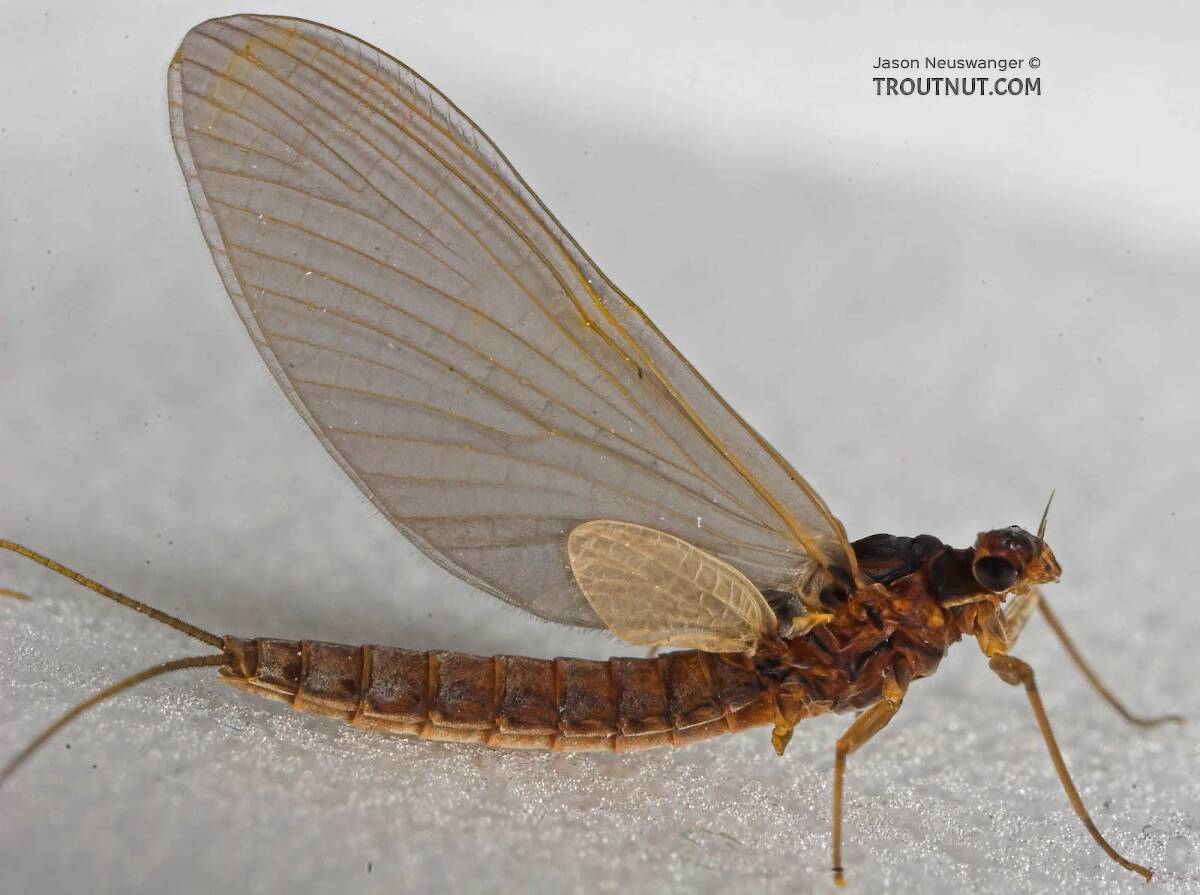 Collected May 7, 2005 from the Beaverkill River in New York
Added by Troutnut on May 16, 2006
Female Paraleptophlebia (Blue Quills) Mayfly Dun
5 Pictures 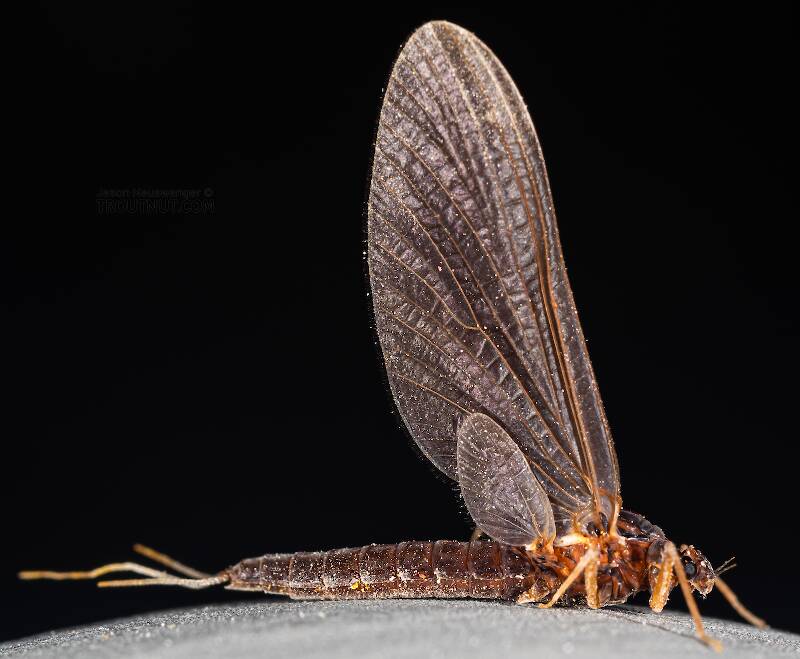 I hadn't seen an intact adult mayfly to catch all day, when suddenly I saw this Paraleptophlebia dun flying six inches in front of my face and nabbed it with my hand without even thinking. It has some sort of bright debris on it that probably comes from placing it in a transport container that hadn't been cleaned recently enough.
Collected July 28, 2019 from Mystery Creek #250 in Washington
Added by Troutnut on July 29, 2019
Female Paraleptophlebia (Blue Quills) Mayfly Dun
3 Pictures 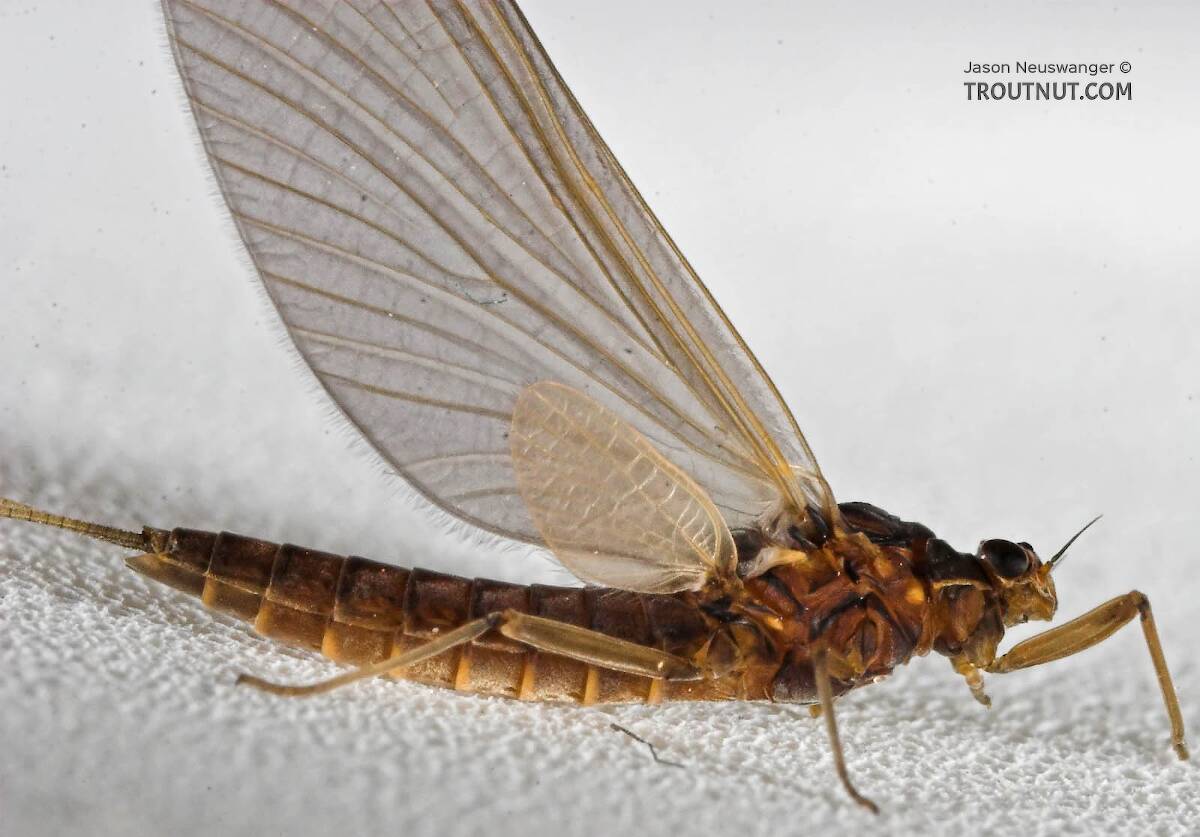 Collected May 7, 2005 from the Beaverkill River in New York
Added by Troutnut on May 16, 2006
Female Paraleptophlebia debilis (Mahogany Dun) Mayfly Dun
3 Pictures 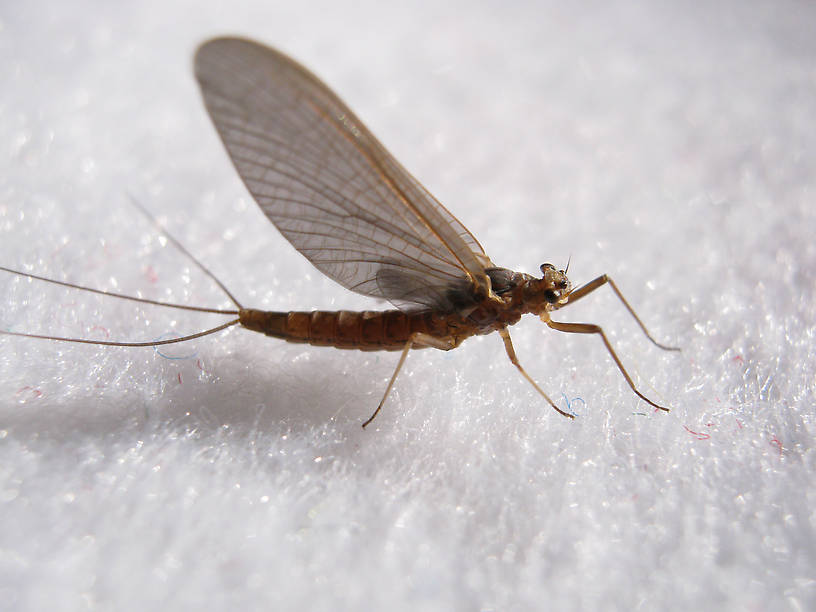 Size: 9mm. These photos really highlight the brown pigmentation of the wing venation, but in the hand the wings look to be a uniform smokey gray. - Entoman
Collected October 22, 2011 from the Fall River in California
Added by Entoman on February 4, 2012 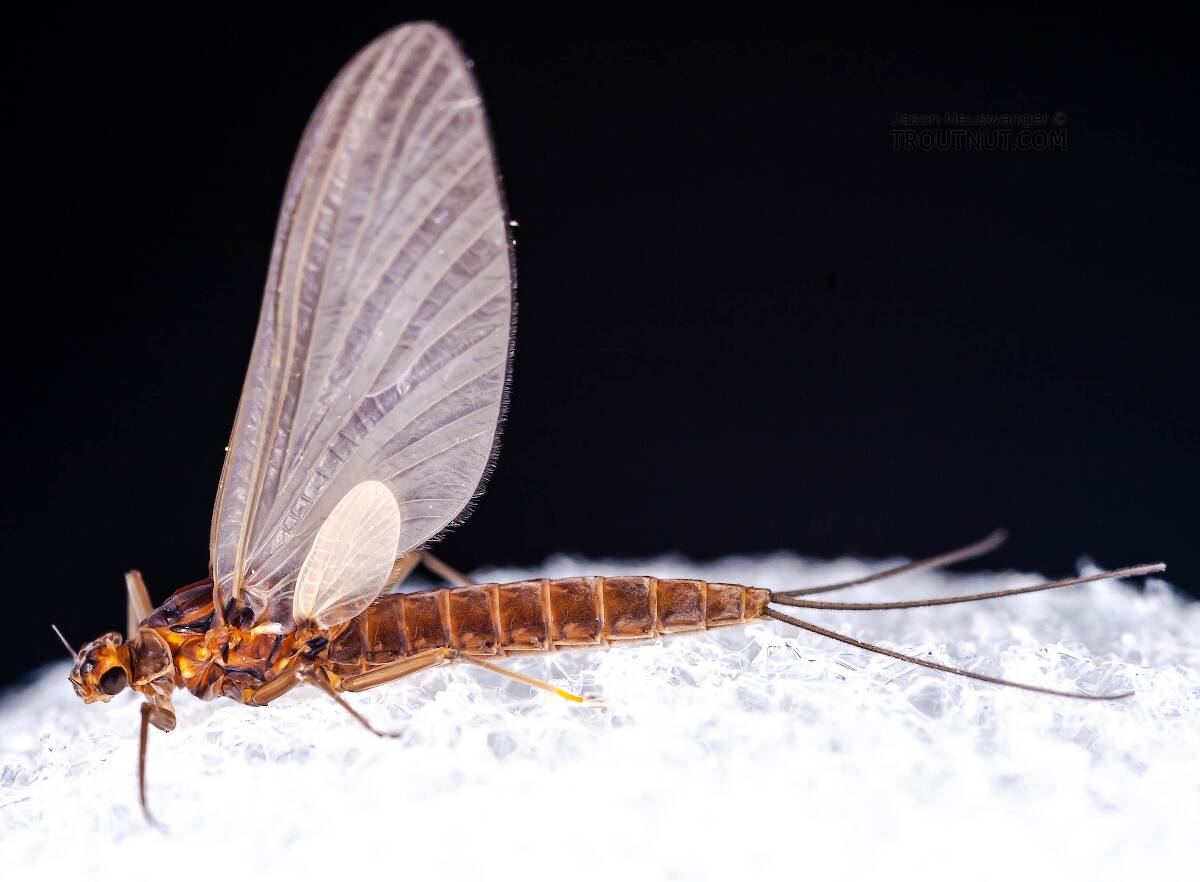 Collected May 6, 2007 from the Neversink River in New York
Added by Troutnut on May 10, 2007
Male Paraleptophlebia (Blue Quills) Mayfly Dun
7 Pictures 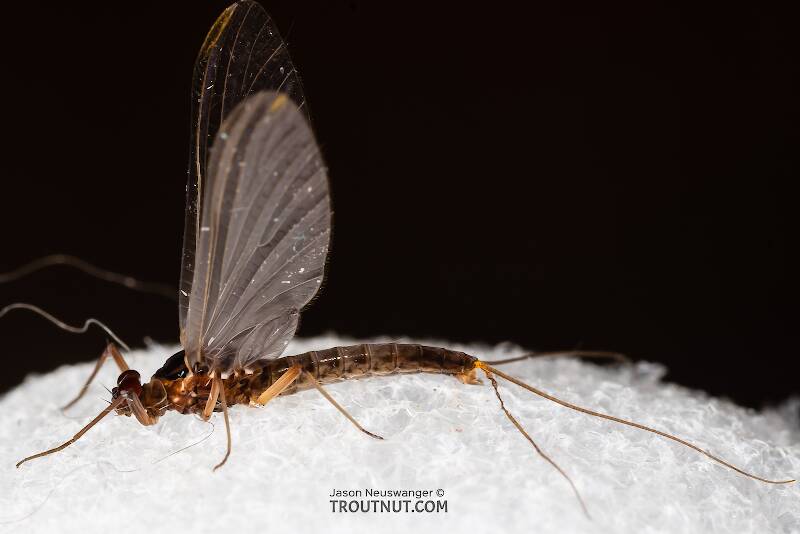 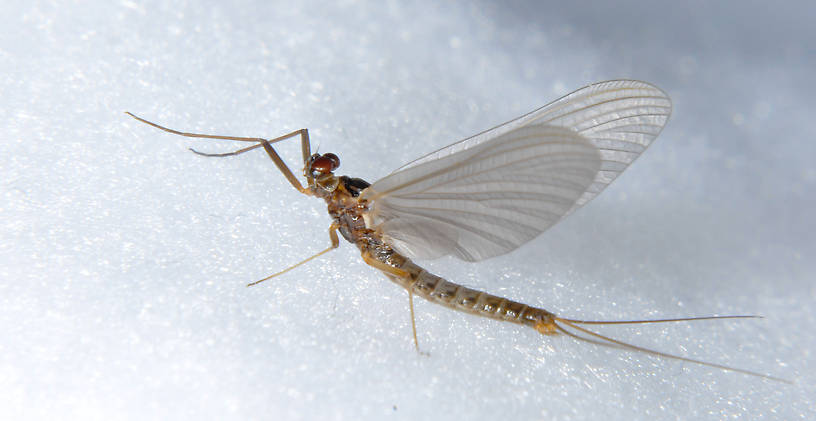 You wonder sometimes how certain insects get their common names. This one is called the 'mahogany dun' for some unknown reason.
Collected October 5, 2011 from the Touchet River in Washington
Added by Bnewell on October 6, 2011 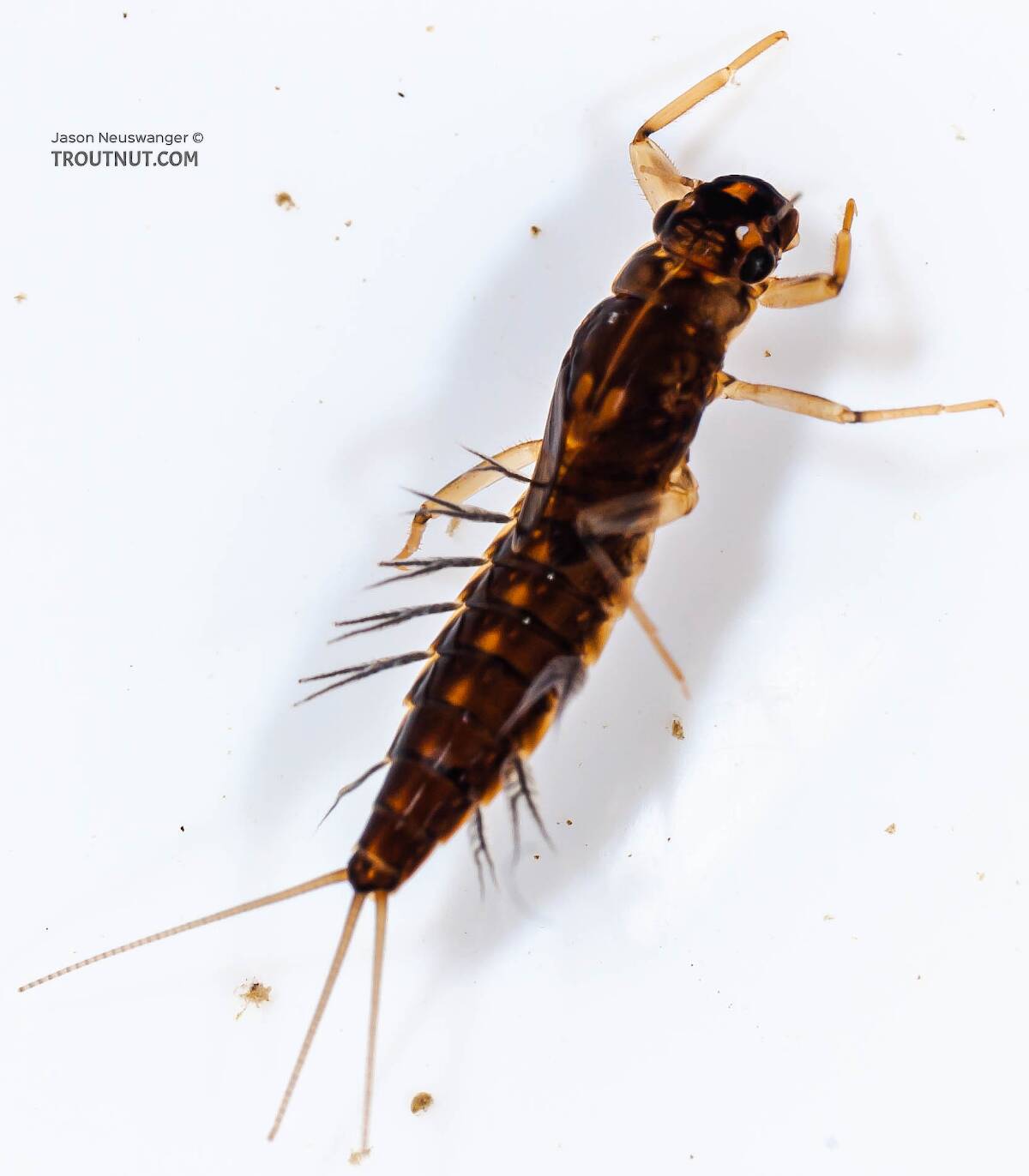 This one is missing several gills due to capture damage.
Collected February 5, 2004 from unknown in Wisconsin
Added by Troutnut on January 25, 2006
Paraleptophlebia (Blue Quills) Mayfly Nymph
4 Pictures 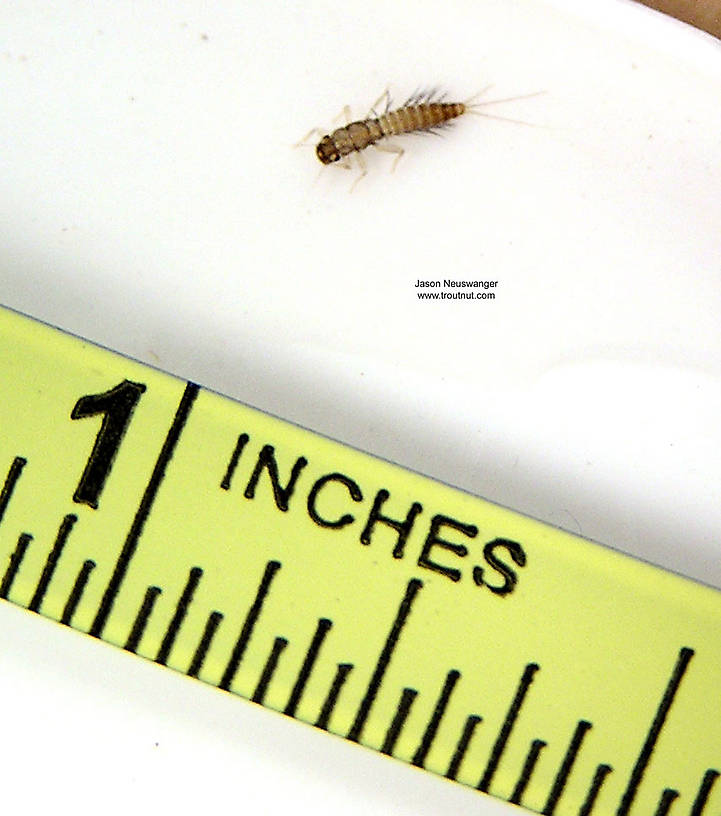 Looking at this one under the microscope, I noted that is has untracheated gills which fork 1/3 of the way from the base and postero-lateral spines on abdominal segment 9
Collected February 7, 2004 from unknown in Wisconsin
Added by Troutnut on January 25, 2006
Paraleptophlebia (Blue Quills) Mayfly Nymph
4 Pictures 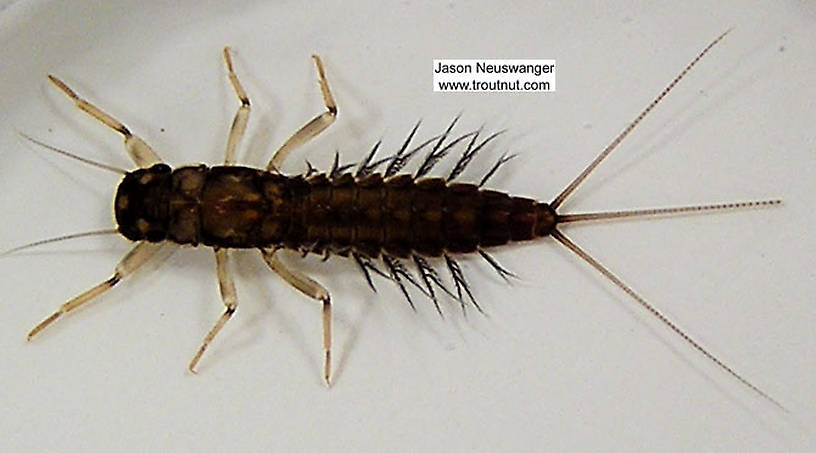 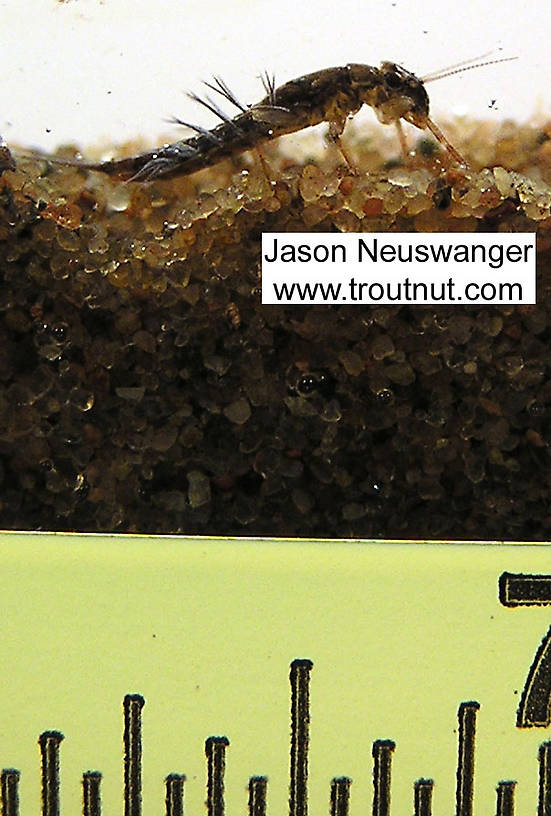 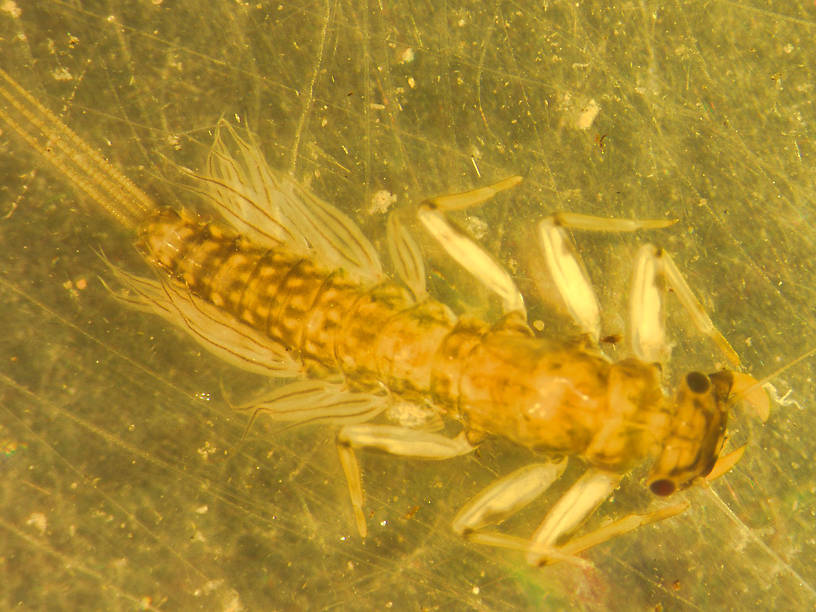 This species is interesting because it is common in lakes as well as streams. It is one of the last species of the year to emerge in western Montana. Adults have been collected as late as October 15 weather permitting.
Collected July 31, 2007 from Flathead Lake in Montana
Added by Bnewell on June 26, 2011
Paraleptophlebia bicornuta (Large Slate-Winged Mahogany Dun) Mayfly Nymph
2 Pictures 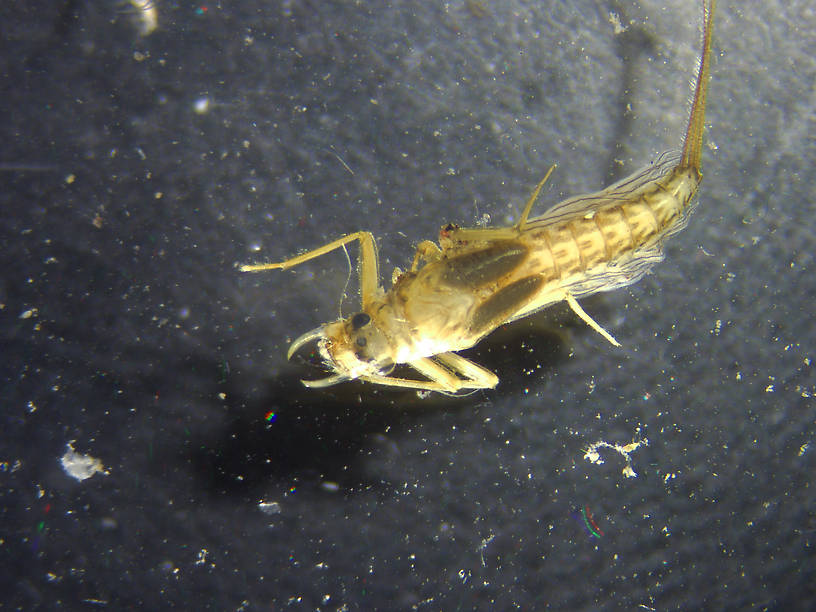 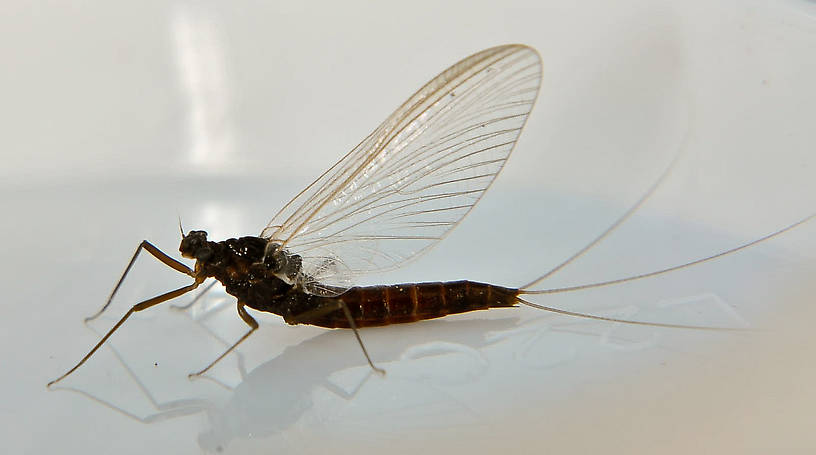 This female exhibits the dark chocolate color so common in this genus.
Collected June 5, 2011 from the Touchet River in Washington
Added by Bnewell on June 26, 2011 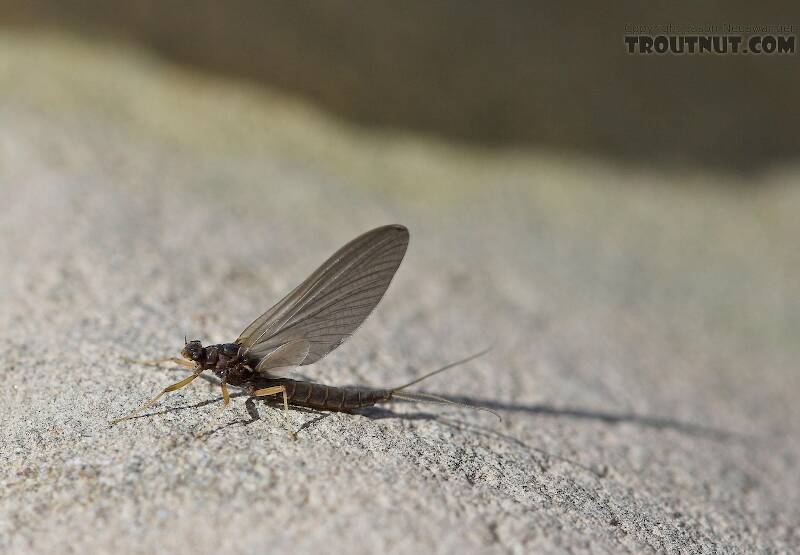 I found this little Paraleptophlebia dun along a Catskill stream, but not enough of her brethren were emerging to get the early-season trout to rise.
In this picture: Mayfly Genus Paraleptophlebia (Blue Quills).
Taken May 8, 2005 from the Beaverkill River in New York
Added by Troutnut on May 13, 2021

Western Paraleptophlebia
17 replies
Posted by Entoman on Feb 4, 2012
Last reply on Feb 7, 2012 by Entoman
Paul wrote in another topic:

Yes, the Paraleps can come about the same time as the tricaudatus, but don't start as early I think. And I think they were a mid-morning deal where tricaudatus has more of an afternoon peak. (Here in the rockies we're not supoosed to don't have the early P adoptiva, although last spring I found a single youngish nymph that my key would only take it to adoptiva -by gills if I remember right. Wish I'd pickled it and had it properly ID'd.

Anyway, back east I found the Paraleps emerged from slower currents and siltier substrates -often along stream edges. Whereas tricaudatus spilled out of the riffles. They could mix of course in certain places, but one could find one predominant if you wanted to (and I did bc I wanted to know each better), by focusing on key habitat.

Fly patterns could be identical really, although I had my own, esp for the nymphs. In fact, I'm still using some P adoptiva mimic parachutes (more a dun gray) during Baetis activity.

I largely agree, though they seem to be more tolerant of current than most genera of leptophlebiids. I have sampled them from riffles. In my experience (with an admitted western bias), they are far more important in the Fall. If an angler is lucky enough to be in place (and aware of them) when they are schooled up in preparation for hatching, some memorable nymphing can take place! :)

P. adoptiva is an eastern species. By far the most important species in the West is P. debilis, though they can be found mixed with others, particularly the unusual tusk bearing species bicornuta and in some locales packii. Anglers that occasionally come across these tuskers often confuse them with the immature burrowing ephemerids they resemble. Many anglers use their standard nymphs and do just fine with them. The PT is a popular pattern. Sometimes, a nymph that more accurately suggests their silhouette is the ticket. Because of their build and very obvious gills, they look more like a small long-tailed burrower than they do the typical baetid or ephemerellid, and it is good for the angler to keep this in mind.

Most duns and spinners are typically a rich brown, hence the name "Mahogany Dun." They can run the gamut from gray to almost black though, depending on the location. The slender bodies and coloration of the duns lead to them often being mistaken for baetids, but the oval vertically held hind wings and three tails make them easy to distinguish from that family. Check out this link to the hatch page for a look at the natural dun.
http://www.troutnut.com/hatch/752/Mayfly-Paraleptophlebia-debilis-Mahogany-Dun

Below are a couple of patterns I find very useful when this critter is about.

Reply
Paralep Hatching Behavior
9 replies
Posted by Shawnny3 on Apr 6, 2009
Last reply on Apr 30, 2009 by Taxon
I can't remember where I read or heard these things (might have been on this site), but I want to make sure my vague recollections are not totally false. When Paraleptophlebia are mating, do they make exaggerated dives in clouds above the stream? If so, do they often end up in the water at these times or do they fall as spinners much later? Finally, when they emerge, do they do so at the stream bottom and then swim to the surface as duns?

Thanks for any help,
Shawn
Reply