These mayflies are a sleeper hatch which has barely received a nod in the fly fishing literature. Their abundance never matches that of the classic superhatches, but they can be important on some waters. The taxonomic common name for this family and genus is Armored Mayfly but angler reports often refer to them as Humpback Nymphs and the adults as Speckled Duns or Batflies.

Their primary claim to fame is their peculiar shape, both as nymphs and as adults. On most rivers they are a rare oddity, but there are places where their spinner falls elicit greedy rises and staunch selectivity from the trout. These spinners never even come close to blanketing the water, but trout have such an affinity for them that even their sparsest falls should excite the angler.

I favor two explanations for their importance. First, they have a very stout profile, and late-season beetle action suggests that trout like this trait. Second, the Baetisca action lasts for up to a month on a single stretch of water. This caters to the selective trout's love of the familiar.

I have found good populations of Baetisca laurentina in three drainages in northern Wisconsin, where their activity peaks in early June but continues through the rest of the month. I've known fish on the Bois Brule River to feed greedily and selectively on Baetisca spinners. In the East, where the major species is Baetisca obesa, Ernest Schwiebert reported their importance on the Neversink in the Catskills, and I've heard multiple reports of Baetisca spinner fall rises on the Battenkill in Vermont.

Time of day : Morning and possibly at night

Baetisca nymphs crawl out of the water to emerge, which may take ten minutes or more, so the duns are of no interest to the trout. They are unique among mayflies in that they may crawl more than one meter from the water to emerge, a behavior reported in Edmunds and McCafferty's The Mayfly Subimago. Some stoneflies do this, but other mayflies which crawl out of the water only go a few inches.

The duns are pretty insects with stout bodies and Dalmatian-speckled wings which become clear when they molt into spinners.

Habitat: Both riffles and calm runs

Where Baetisca spinners are abundant, they inspire fierce selectivity in the trout, which relish them above all else on certain spring evenings. They suck Baetisca spinners down with aggressive gulps usually reserved for the fluttering duns of meaty drakes. I have watched these spinners upstage larger or more prolific maylies many times, although this cannot always be expected.

Notice in my photos that the female spinners are extremely fat mayflies (don't tell them I said that). The males, though still not as slender as a normal mayfly, are much less robust. Spinner patterns should imitate the full-figured females, because they seem to be more common on the water than the males.

They are rarely spent as soon as they fall on the water. They float at first with their wings upright like duns, and then many collapse half-spent for quite a while before finally losing their energy and becoming fully spent. These upright and half-spent phases last longer with Baetisca spinners than with other mayflies.

I have always fished Baetisca spinners in the evening in Wisconsin, but an early-rising friend reports spinner falls very early in the morning over slow water in Michigan.

Environmental tolerance: Schwiebert writes that they prefer cold, acid watersheds, but I have found fishable populations in alkaline streams of marginal temperature as well.

In Nymphs, Ernest Schwiebert describes his first encounter with abundant Baetisca nymphs on a wild Catskill river. He implies that their imitation can be important by describing a fly-tying method to create their peculiar shape. I have caught trout by imitating these nymphs, but I doubt those fish were feeding selectively.

Several authors write that the nymphs submerge themselves in the thin layer of silt and detritus that accumulates in the calm shallows. I do collect the most nymphs from such habitats, but they are also found on large rocks in riffles and on sunken logs.

Baetisca nymphs are surprisingly fast swimmers given their awkward shape. They move like Baetis nymphs wearing backpacks. See my video at the bottom of this page.

It is essential to imitate the thick, opaque body of the Baetisca spinners with a specialized fly. A normal thin-bodied spinner pattern in the right color and hook size once left me skunked after 45 minutes casting to two dozen selective Baetisca-feeding trout. I do not repeat that mistake.

I wrap an underbody of thin closed-cell foam to the appropriate profile and dub over it. Fly shops in Baetisca country sell patterns with heavy badger hackle, because the dark inside color is suggestive of the spinner's thick body. Both patterns can work.

Specimens of the Mayfly Genus Baetisca 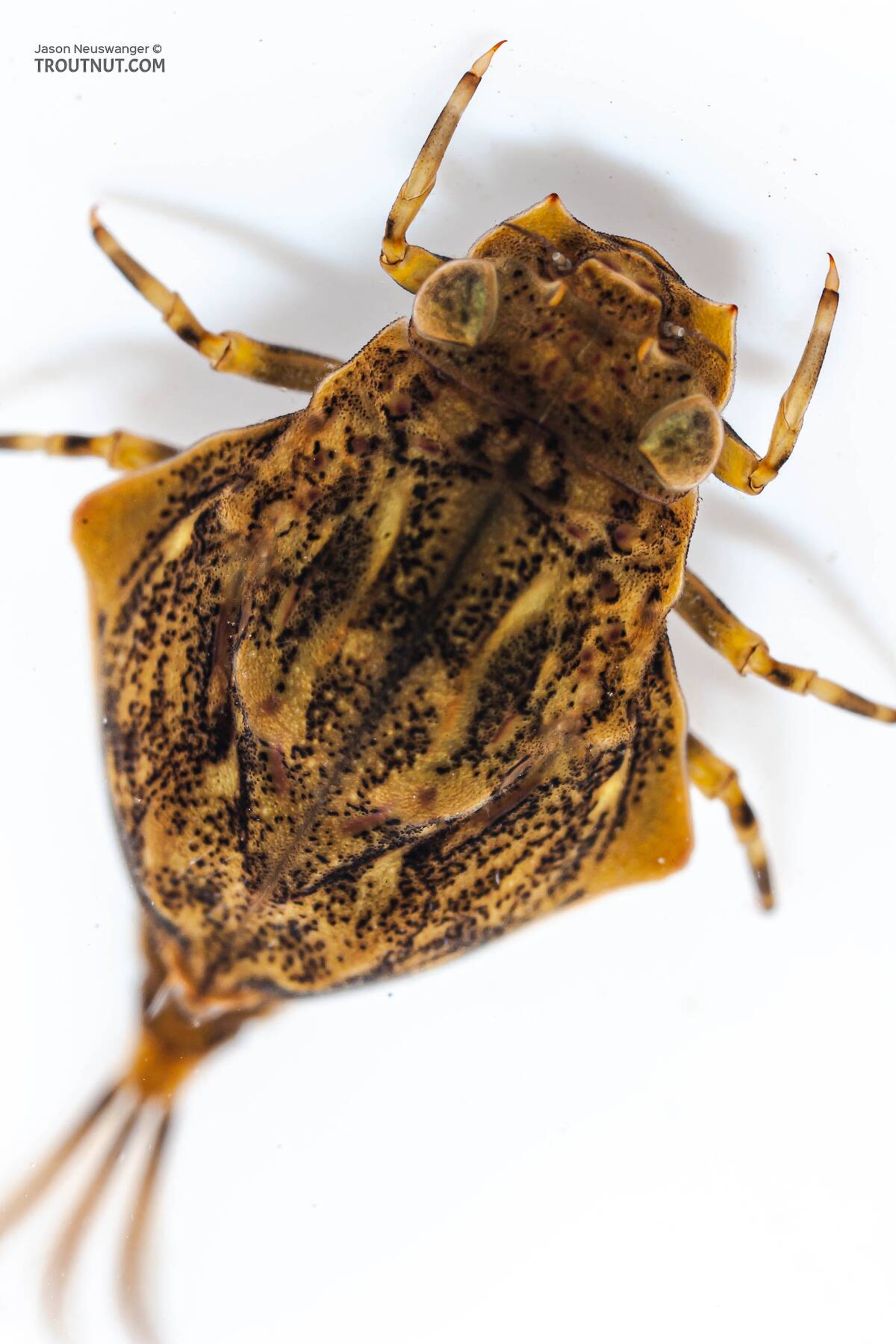 Collected May 6, 2007 from the Neversink River (above reservoir) in New York
Added by Troutnut on May 10, 2007
Baetisca obesa (Armored Mayfly) Mayfly Nymph
10 Pictures 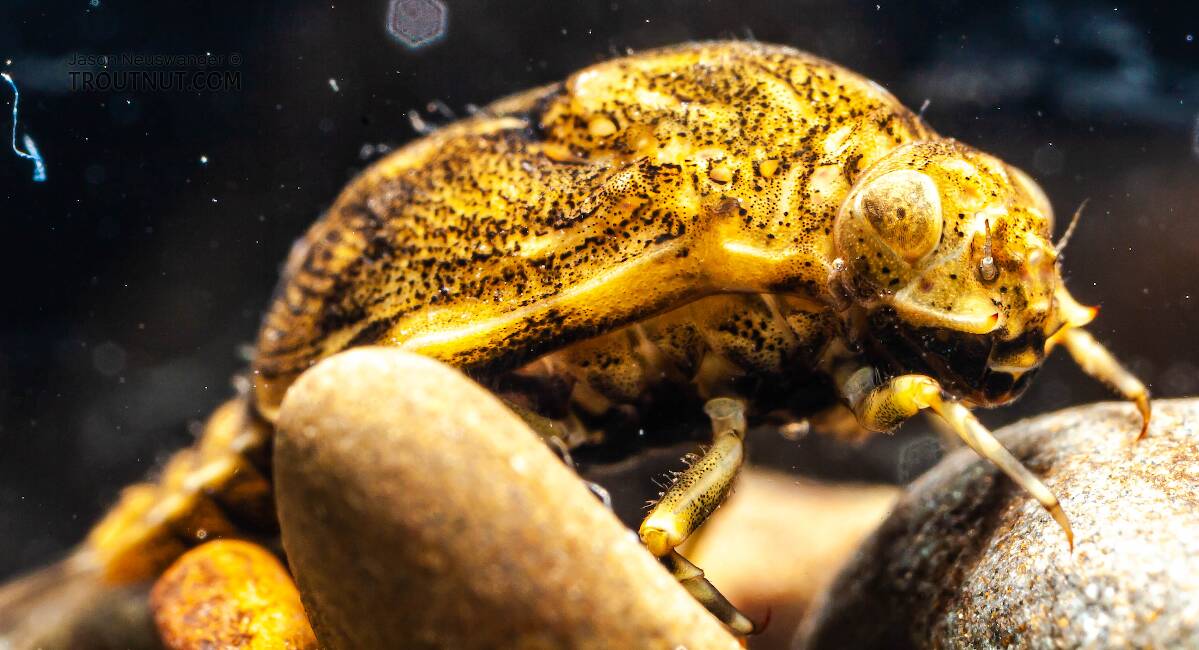 Collected May 6, 2007 from the Neversink River (above reservoir) in New York
Added by Troutnut on May 10, 2007
Baetisca laurentina (Armored Mayfly) Mayfly Nymph
6 Pictures 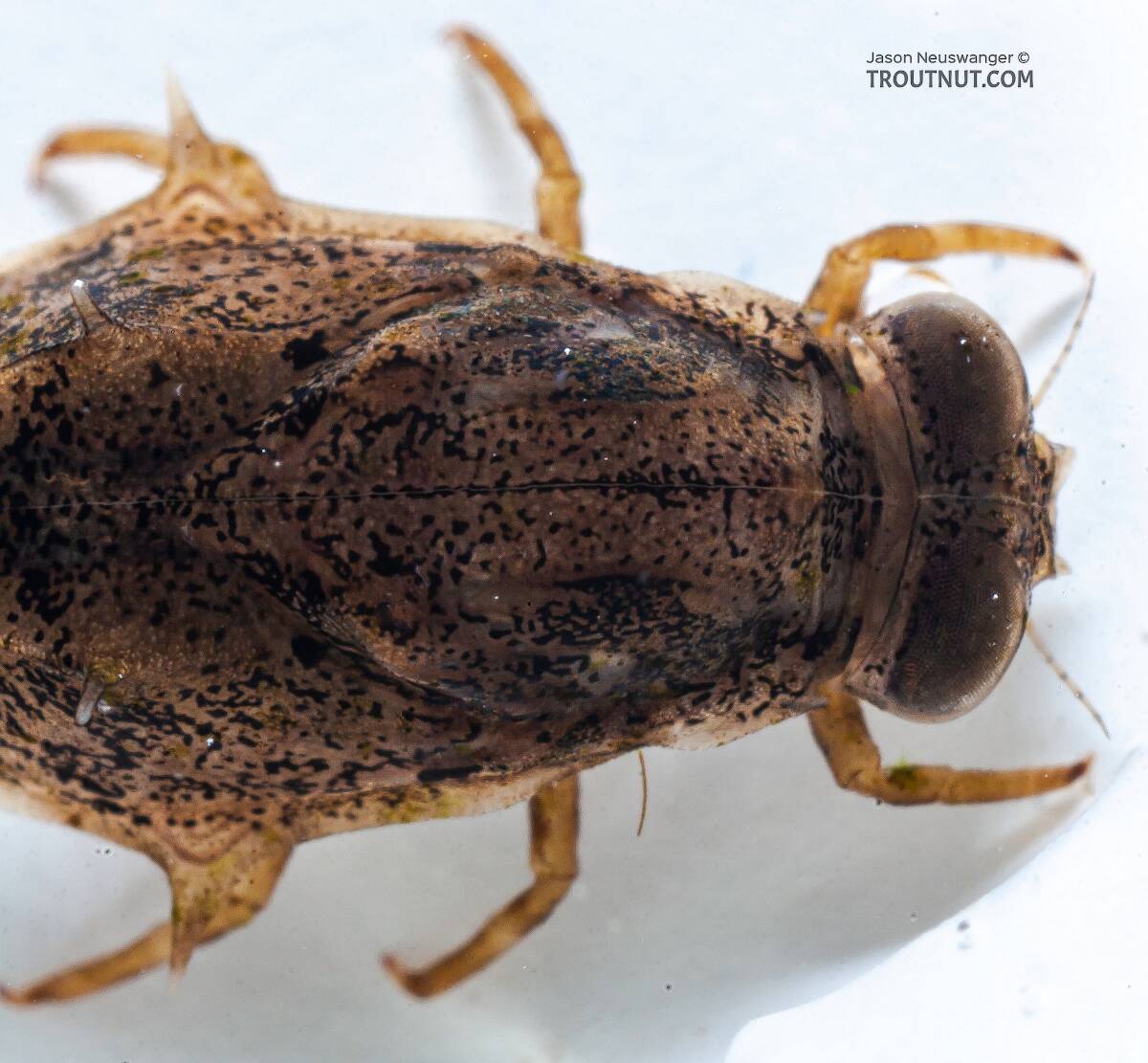 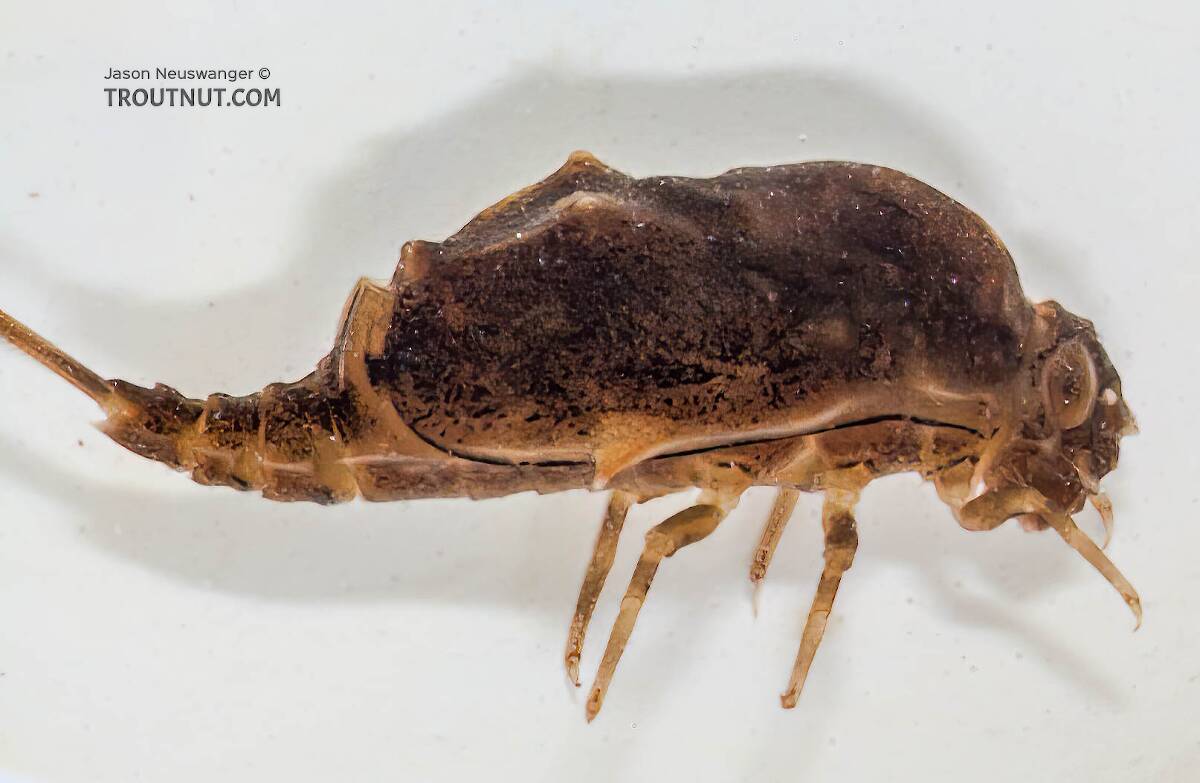 Collected June 8, 2005 from the Namekagon River in Wisconsin
Added by Troutnut on May 26, 2006
Baetisca laurentina (Armored Mayfly) Mayfly Nymph
5 Pictures 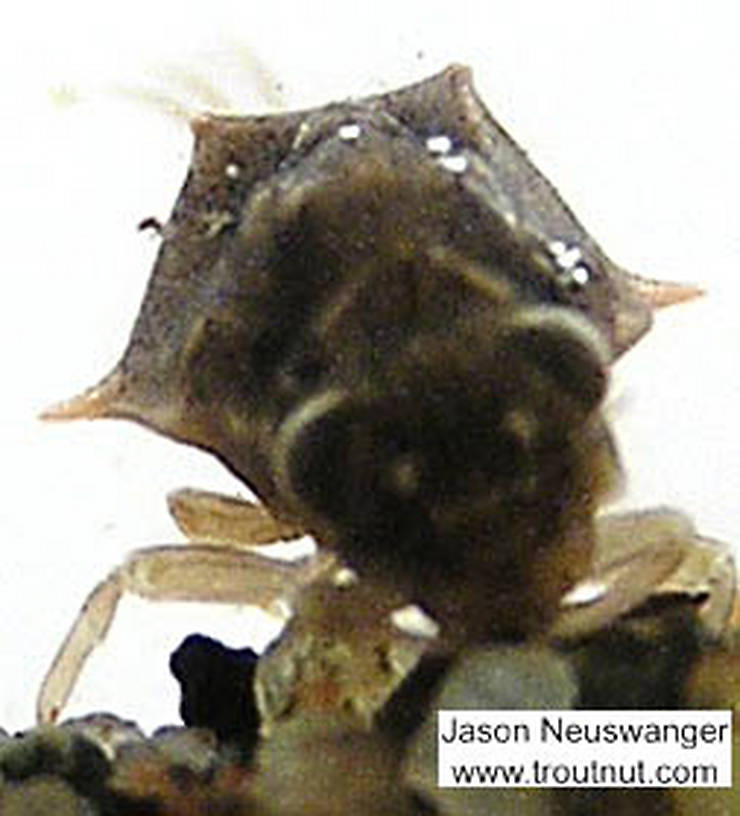 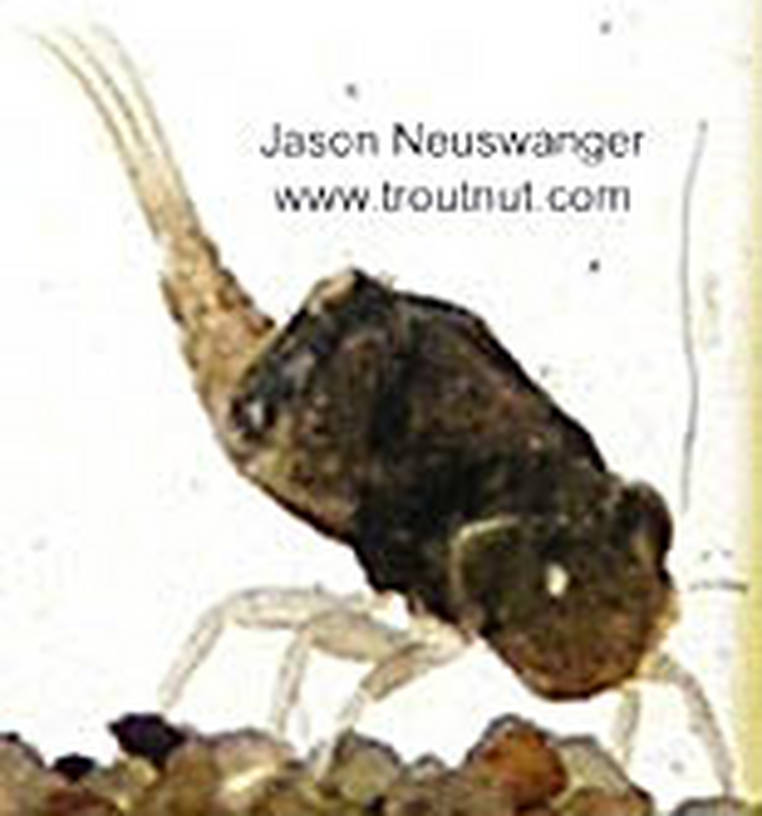 This very small, early instar specimen has some interesting markings, but it's too underdeveloped to identify.
Collected January 14, 2004 from unknown in Wisconsin
Added by Troutnut on January 25, 2006
Baetisca (Armored Mayflies) Mayfly Nymph
4 Pictures 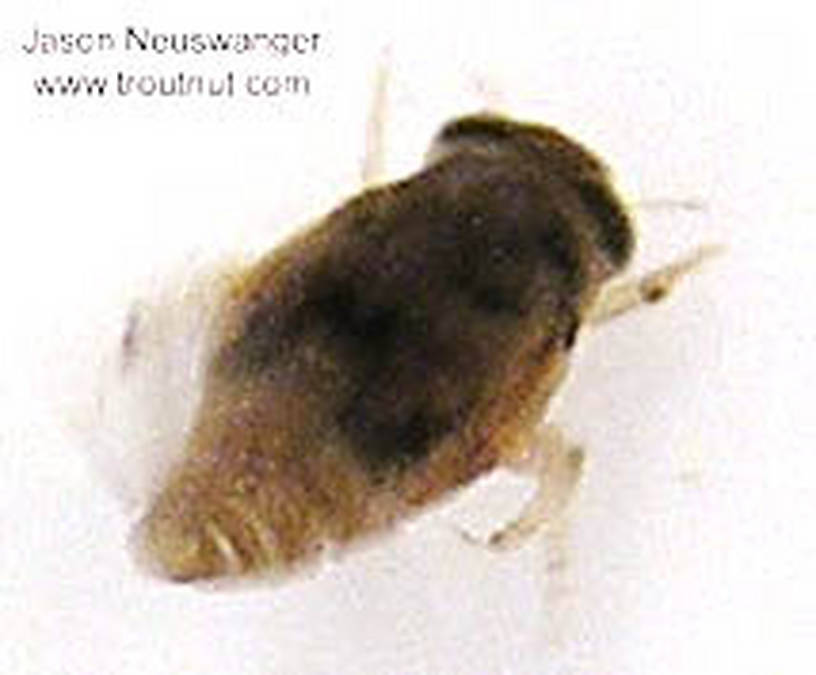 I've only got blurry pictures of this small Baetisca nymph, because it was zooming around the container in a frenzy. Several characteristics, if taken literally, suggest that it may be Baetisca lacustris. However, it's very small and it's the only candidate lacustris I collected among several laurentina specimens, so it's possible this is just an underdeveloped early instar laurentina.
Collected January 14, 2004 from unknown in Wisconsin
Added by Troutnut on January 25, 2006
Baetisca laurentina (Armored Mayfly) Mayfly Nymph
3 Pictures 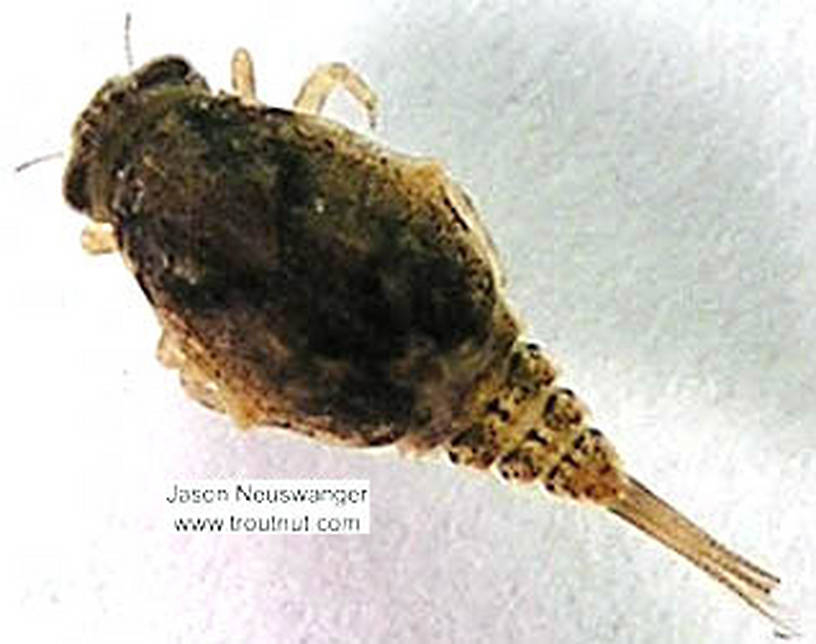 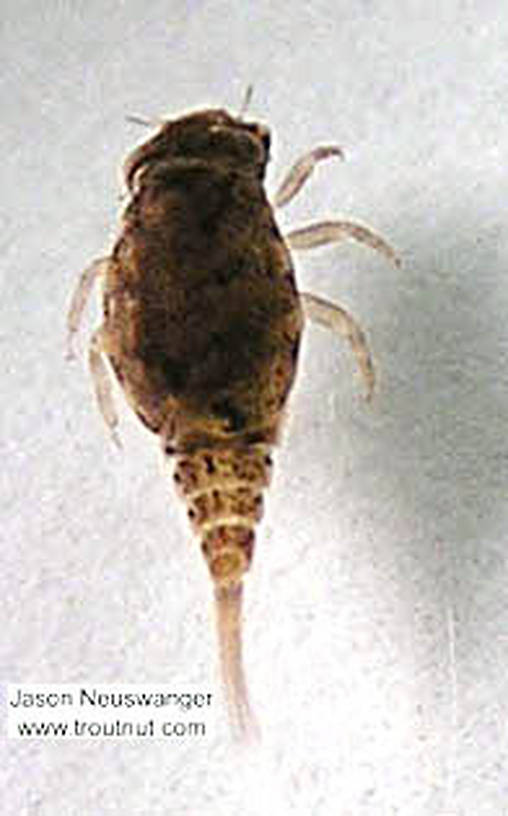 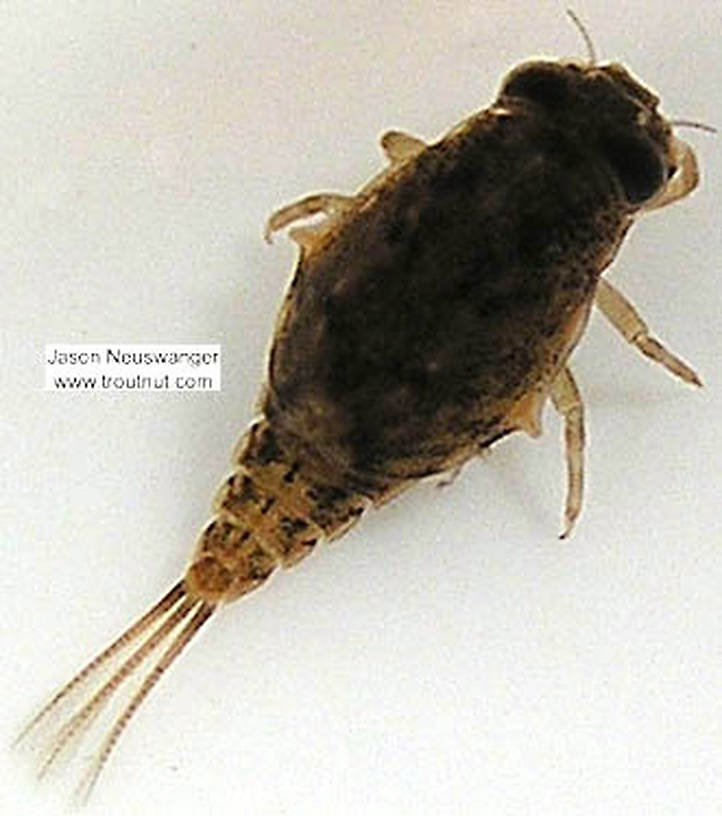 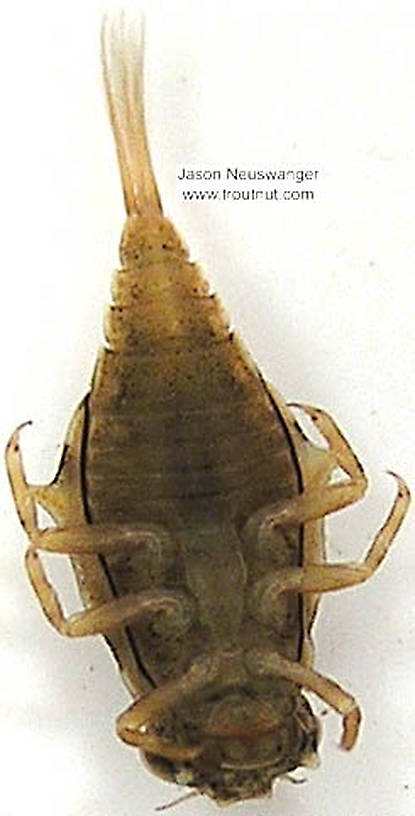 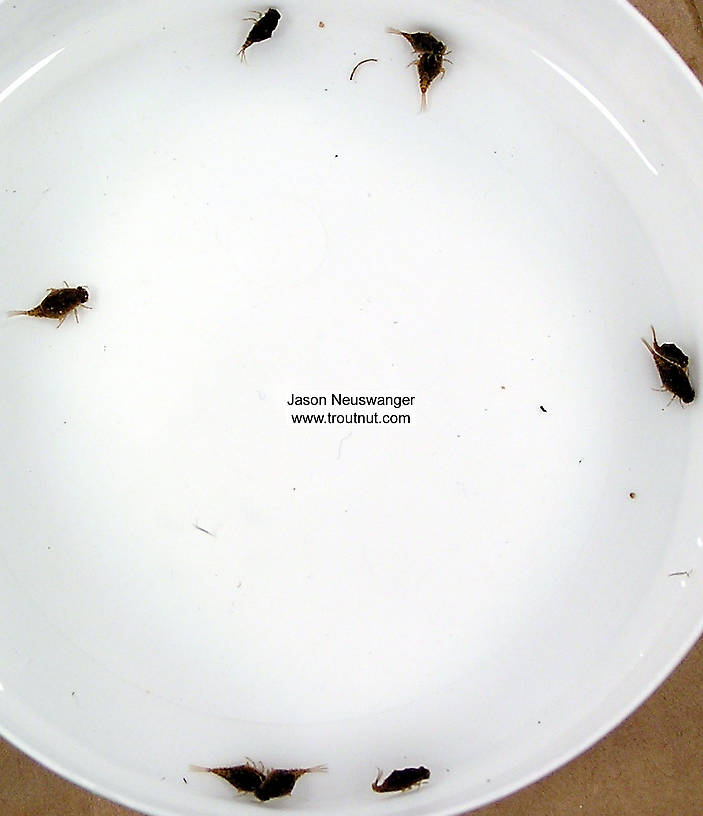 I took a few group picture of a bunch of Baetisca laurentina nymphs to show the degree of individual variation in size, color, and shape that can occur within the same species in the same pool of the same river. This variation is one important reason why trout are forgiving of some small degree of variation in our imitations--the naturals themselves vary, too.
Collected March 1, 2004 from unknown in Wisconsin
Added by Troutnut on January 25, 2006
Baetisca (Armored Mayflies) Mayfly Nymph
4 Pictures 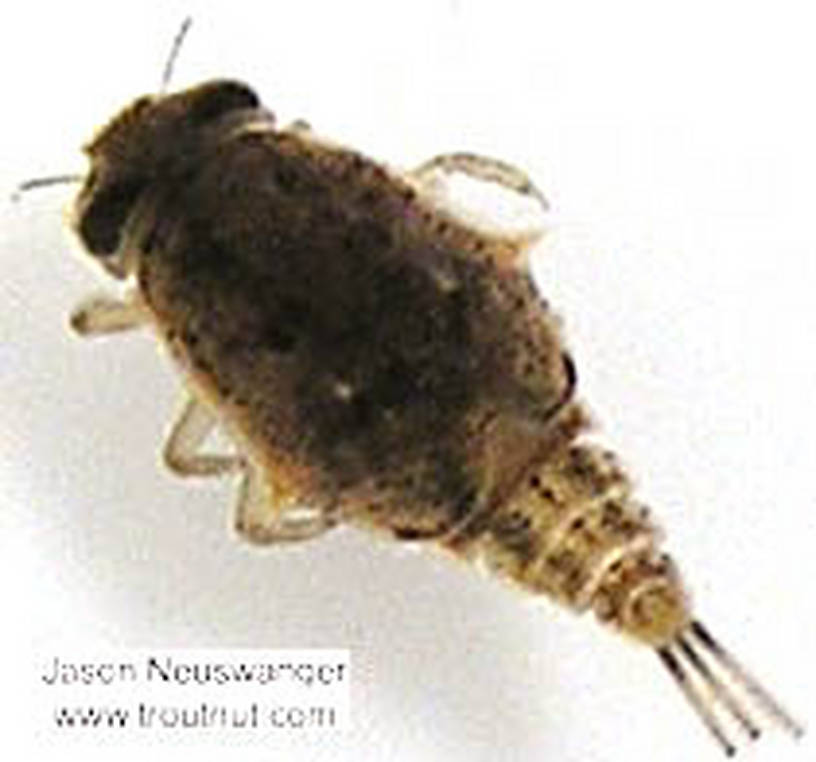 I'm unsure which species this is: it lacks the usual features of B. laurentina, but it's small, so maybe it's just an underdeveloped early instar. Otherwise, it looks like it might be B. obesa.
Collected January 14, 2004 from unknown in Wisconsin
Added by Troutnut on January 25, 2006
Baetisca columbiana (Armored Mayfly) Mayfly Nymph
1 Picture 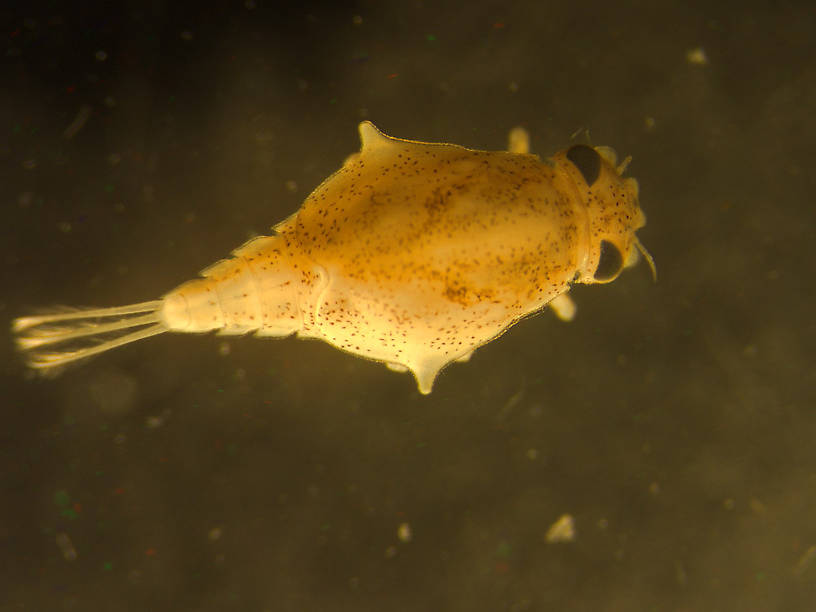 This is also a very rare mayfly. This specimen was the first ever collected in western Montana. Only 5 specimens have been collected from this large river.
Collected July 5, 2007 from the Flathead River-lower in Montana
Added by Bnewell on June 26, 2011 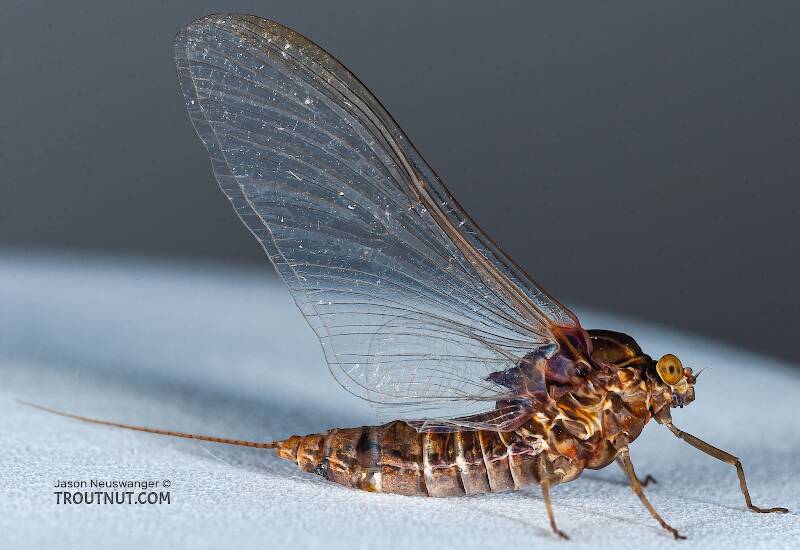 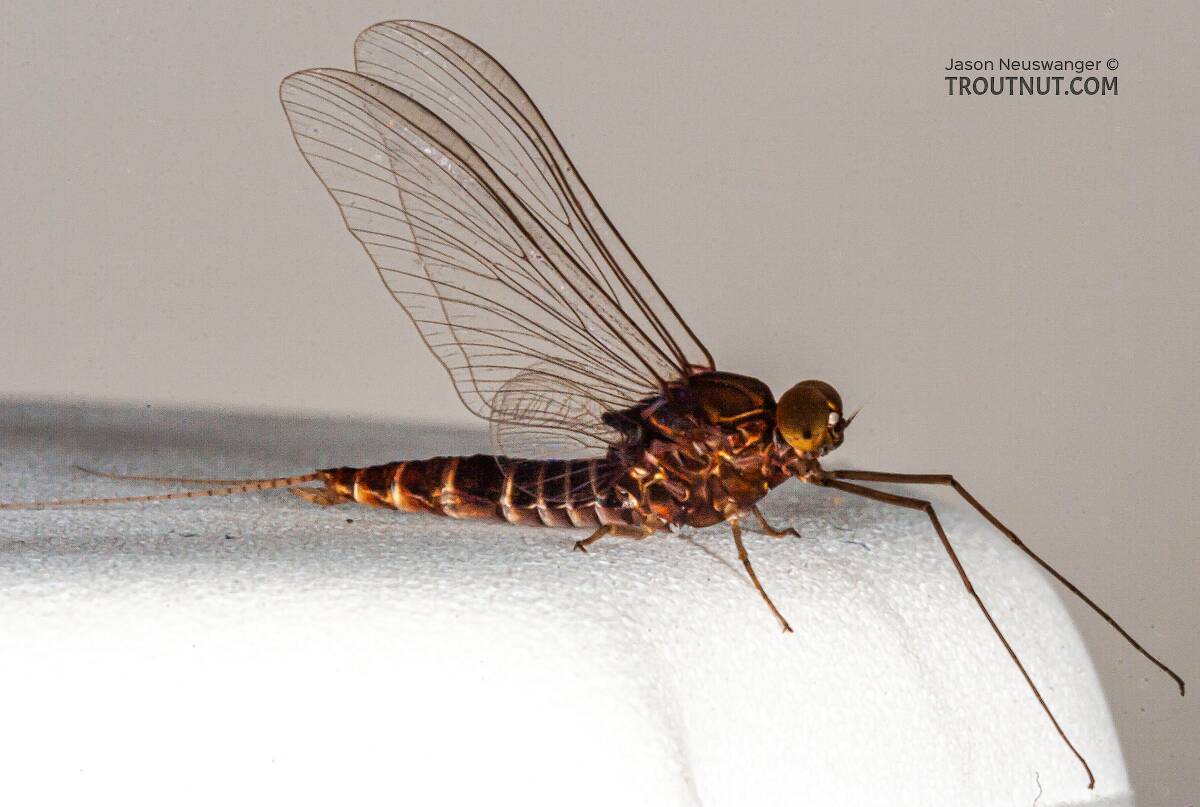 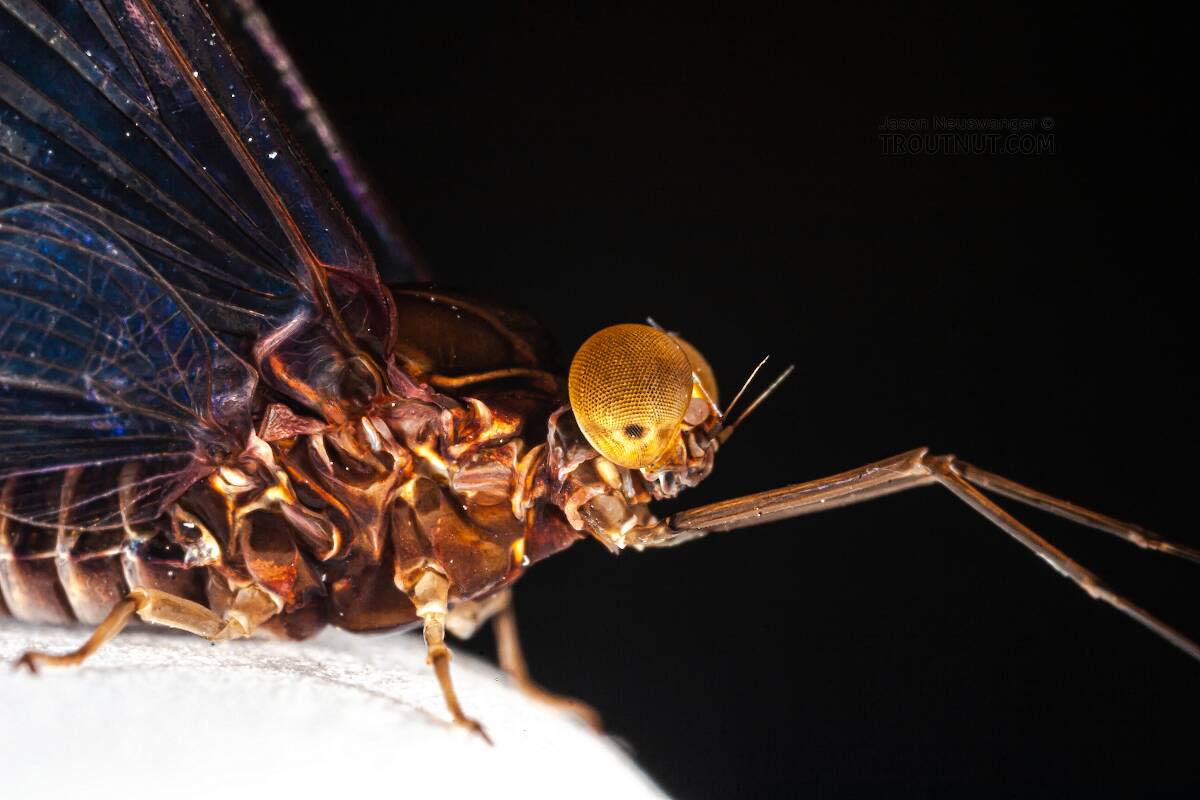 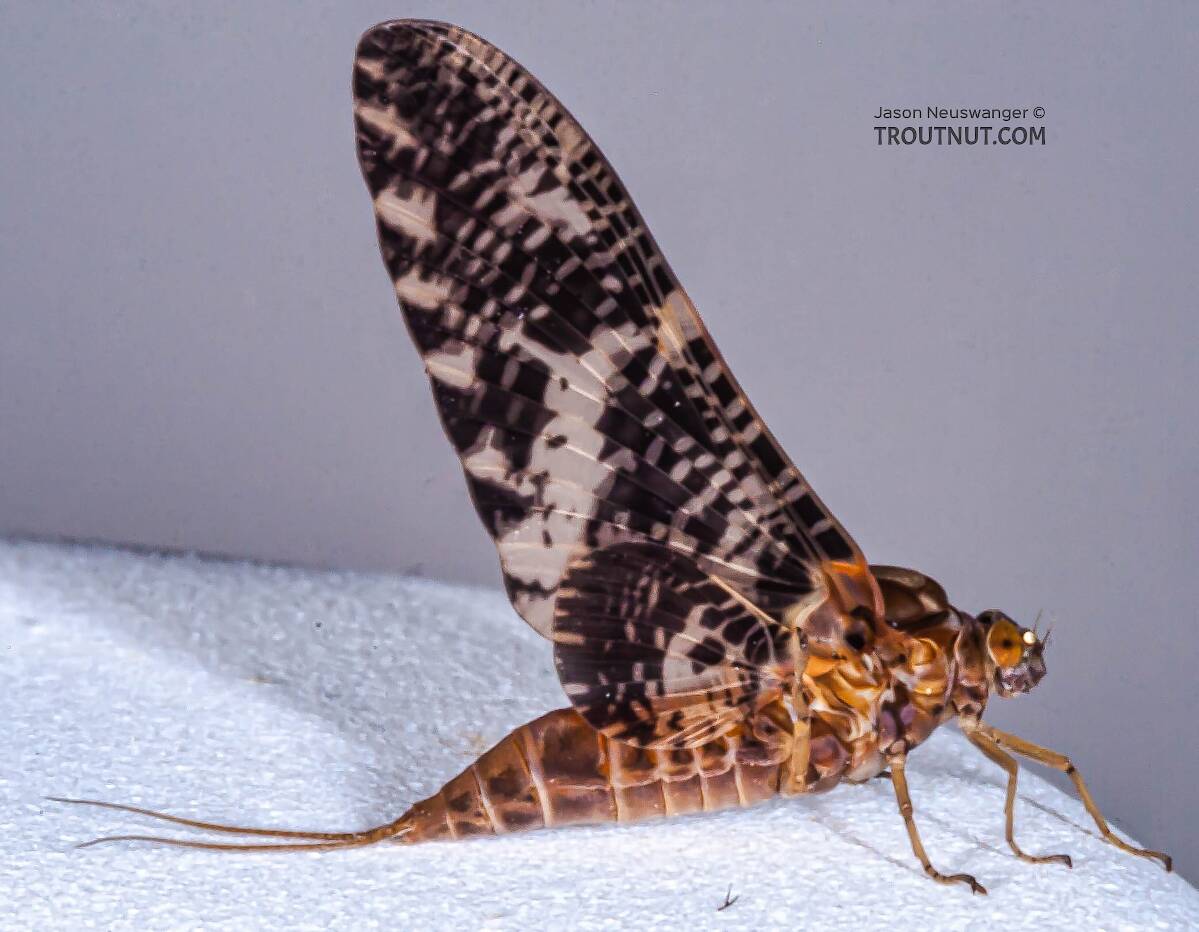 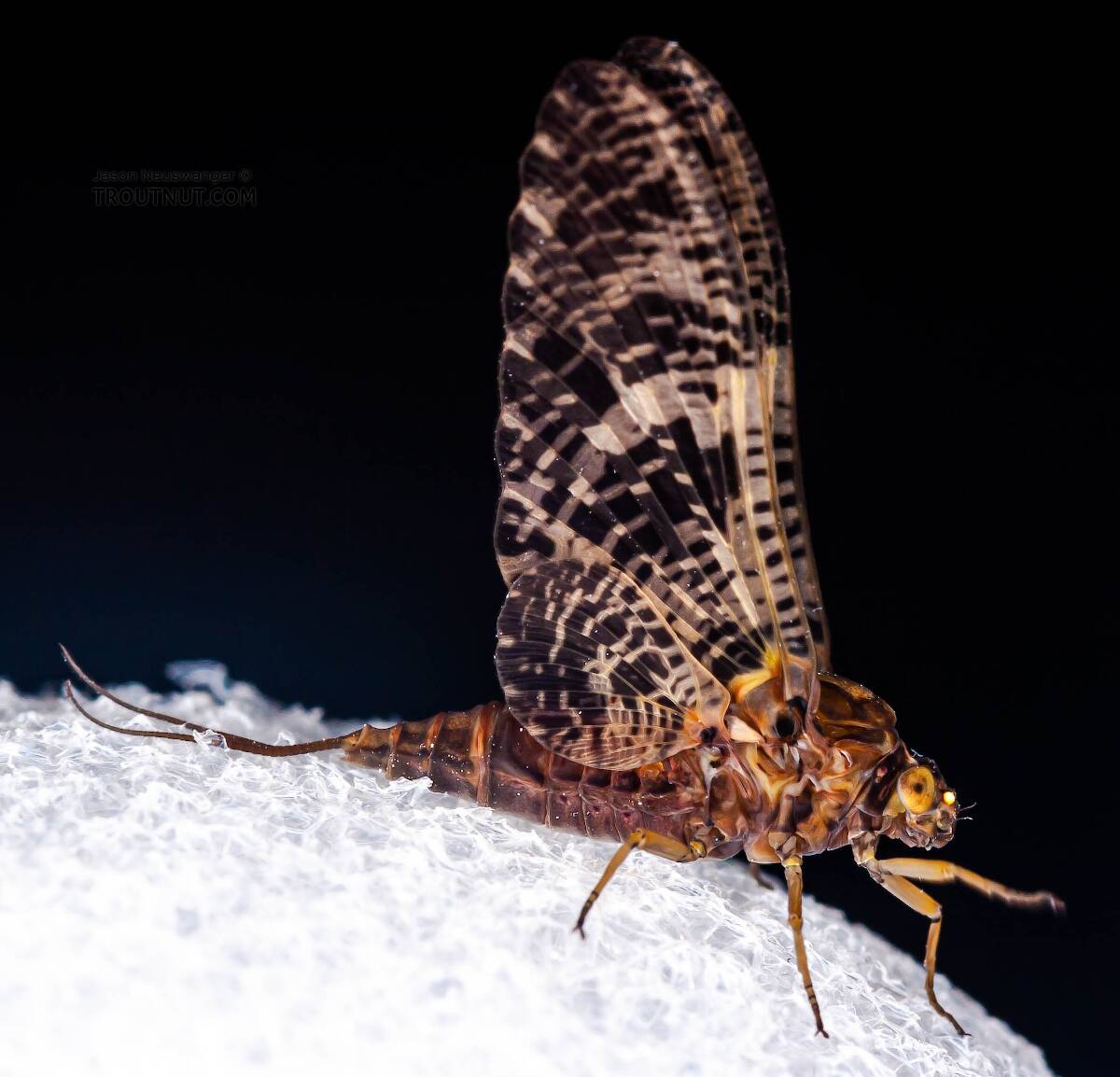 This Baetisca obesa dun hatched out in my aquarium from nymphs collected a couple weeks earlier.
Collected May 23, 2007 from the Neversink River (aquarium-raised) in New York
Added by Troutnut on June 4, 2007 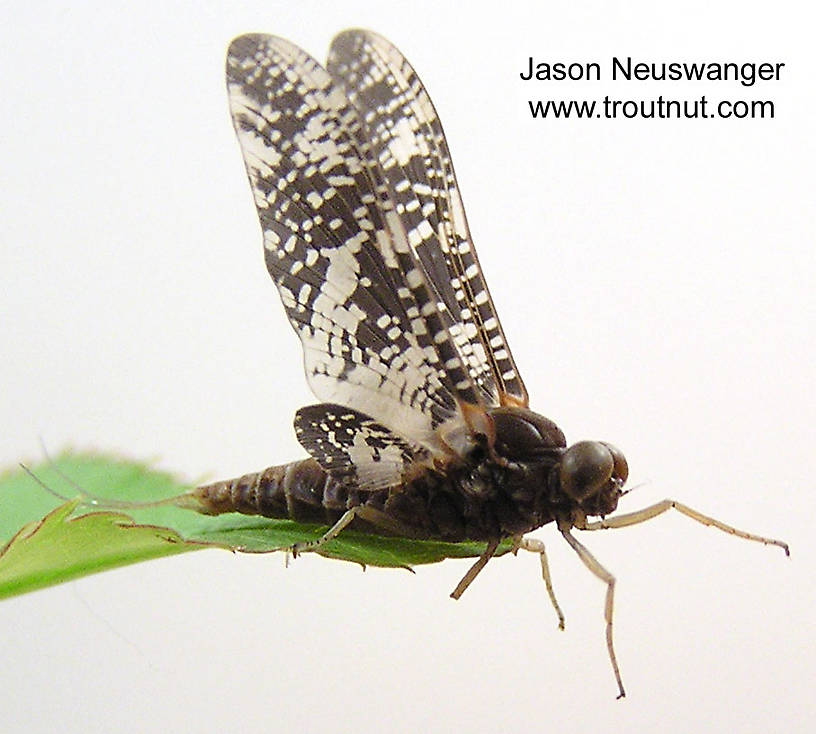 I found this dun floating on the surface at night while I mucked around in the shallows collecting nymphs. I suspect he may have been prompted to emerge by the stress of my disturbance.
Collected May 22, 2004 from the Namekagon River in Wisconsin
Added by Troutnut on January 25, 2006
Male Baetisca laurentina (Armored Mayfly) Mayfly Dun
5 Pictures 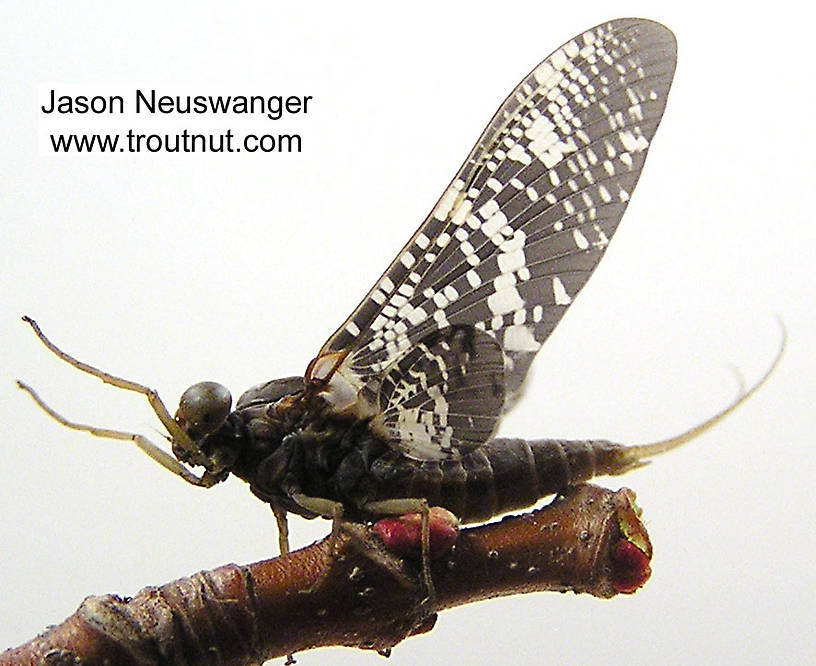 The clumsy-looking mayfly nymphs of the genus Baetisca are surprisingly good swimmers.

An important hatch
2 replies
Posted by Troutnut on Jun 26, 2006 in the species Baetisca laurentina
Last reply on Apr 8, 2013 by Willy
Based on reports from several sources and my own experiences, I'm beginning to think it is significantly more important than it has been credited for. The duns emerge by crawling out onto land, so they aren't important, but some of my most memorable fishing nights of 2005 were due to Baetisca spinner falls.

It is a tricky hatch to detect. I haven't seen more than a couple of their spinners in the air at a time, though some of my friends report spotting their swarms. Normally for me they just showed up on the water from unseen swarms upstream. They were mixed with spinners from Ephemerella invaria and Maccaffertium vicarium, among others, but the fish were relentlessly selective to the Baetisca laurentina spinners.

I wasted the better part of an hour flinging a sulphur imitation the first time I encountered a Baetisca fall. Like Ephemerella spinners, they can be hard to spot on the water, and they were much more sparse. I finally captured one, noticed the very different body profile, and since I didn't have anything remotely imitating it I continued to catch no fish. I returned the next night with an imitation with a robust, opaque body, and the fish went crazy for it.

I just finished reading through the account by Caucci and Nastasi in Hatches II about how the extremely important Ephemerella invaria sulphur species went unnoticed for decades because it was confused with Ephemerella dorothea. The maddening difficulty of some dorothea hatches was partially explained away once people understood this difference.

Although Baetisca is much less prominent than Ephemerella invaria, I suspect it has similarly been confused with well-known sulphur species in the rare locations and occasions where it is important.
Reply
Baetisca in Vermont
1 replies
Posted by BRAT on Oct 25, 2009
Last reply on Oct 25, 2009 by Taxon
Hi there; I just gathered a sample from our local Black River here in SE Vermont, and found a thriving population of armored mayflies. Wasn't sure what they were at first, with their bubble-humped backs and short little tails, but once I used my hand lens I realized they have tiny little "thorns" behind their last legs. Their mottled coloring resembles everything I've seen here, confirming my ID. I'll be sending off a sample to a friendly bug lab to let the pros look at them.
Reply
Similiar found in Minnesota
1 replies
Posted by PRohlfsen on May 11, 2007 in the species Baetisca obesa
Last reply on May 11, 2007 by Troutnut
I was fishing the Vermillion River in Minnesota south of the metro area and found a nymph similar to the Armored Mayfly Nymph. It did appear to be much more green in color. It was moving through a really muddy part of the stream, which I found interesting.
Reply
Can't wait to hit this hatch
Posted by Troutnut on Jun 12, 2006 in the species Baetisca laurentina
Last reply on Jun 12, 2006 by Troutnut
It sounds like the Baetisca hatch is really going on here in northern Wisconsin now. I've heard reports from more than one source about fishable Baetisca laurentina hatches on two of my favorite rivers. I bought some imitations and hopefully I'll be using them tomorrow!
Reply