The Brown Drakes are a favorite hatch of many in the Midwest, and they make a good showing on localized waters across the country. They are usually the first in a series of big drakes which bring large trout to the surface at twilight and into the early hours of the night.

Time of year : Late May through early October; best in the Midwest in early June

This hatch really shines in the Midwest, where it hatches from most large trout streams and many small ones. Angling books unanimously report that it lasts between three and five days in one location before moving upriver, but I know one large Midwestern spring creek where Ephemera simulans action lasts for a couple weeks in many stretches.

It can also create good Eastern hatches in places like the lower Delaware drainage in the Catskills, where its blizzardlike hatches burn out after a few days. Eastern distribution is much spottier than in the Midwest.

This species is also widespread in the West, from Yellowstone to California to Alaska. It emerges later in the year than in the East, extending throughout June and into mid-July. Exceptionally high altitude and latitude can delay it into October.

The nymphs are very fast emergers. I have seen them pop through the surface and into the air as if shot from a cannon. Fred Arbona confirms this observation in Mayflies, the Angler, and the Trout, stating that they leave the water's surface "almost instantly."

This means the best technique for fishing the emergence is to imitate the nymphs. Violent rises may be indicative of trout chasing nymphs to the surface rather than taking duns. There are some accounts of fish feeding on the duns, but they are regarded as the least important stage of this species. Full-hackled imitations are common and successful, imitating the fluttering commotion of duns trying to quickly depart from the water.

Ted Fauceglia says in Mayflies that the best dun emergence occurs in mid to late afternoon. This conflicts with other authors, who write that afternoon emergence is uncommon phenomenon reserved for exceptionally cold, dark days.

Time of day: Dusk and into darkness

The best fishing to come from Ephemera simulans is had during the spinner falls.

The spinners appear at treetop height up to an hour or two before dark. Their clouds descend gradually, and on some nights they are so thick that they land all over the angler and anything else in the river. I had one of the large drakes fly straight into my eye--yet another reason to wear sunglasses while fishing.

Some nights the descending clouds of spinners frustratingly disappear back into the trees. Other times they blanket the water and every trout in the stream, including huge piscivorous browns, may rise to them.

Brown drake nymphs mature in one year in most places, but sometimes they take two. I have done very well fishing their imitations during non-hatch periods on a river where they are common.

They prefer sand and fine gravel over the firm silt of their relatives in Hexagenia, but they are present in silty places too. My favorite place to collect them is a silty culvert pool in the headwaters of a small brook trout stream. Ephemera simulans cohabits there with Baetisca laurentina, Siphloplecton basale, and Eurylophella temporalis--a very uncommon bunch.

Some anglers curse this hatch as an over-hyped disappointment. The promising clouds of spinners which vanish without falling spent certainly contribute to this frustration. It is more likely that anglers are seeing simultaneous emergences and spinner falls. The trout may eat their fill of nymphs below the surface and leave a blanket of spinners untouched, leaving the impression that they do not care for this species.

This one hatched in the middle of July, which is very late for this species.
Collected July 14, 2004 from unknown in Wisconsin
Added by Troutnut on January 25, 2006

Collected June 5, 2005 from the Marengo River in Wisconsin
Added by Troutnut on May 25, 2006
Ephemera simulans (Brown Drake) Mayfly Nymph
10 Pictures 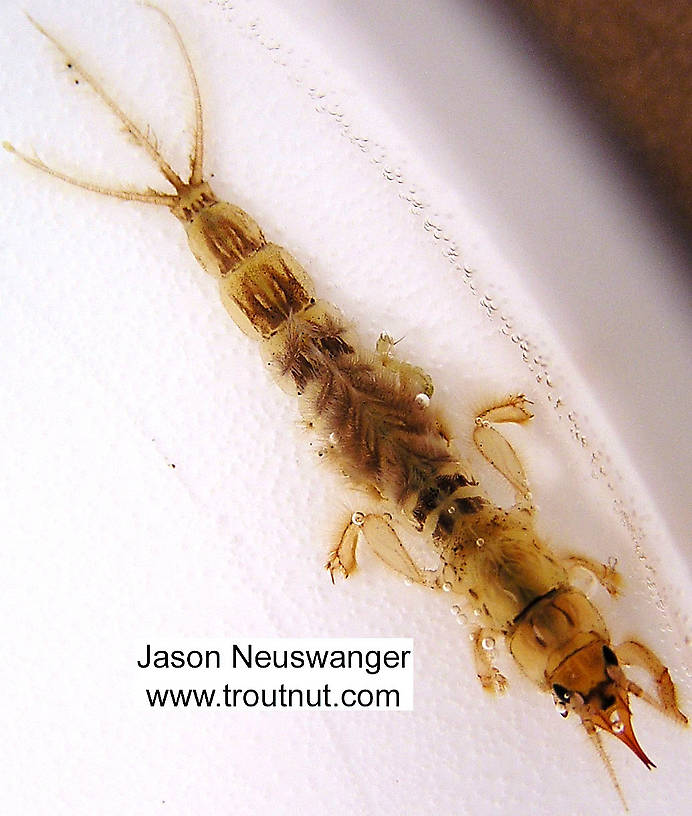 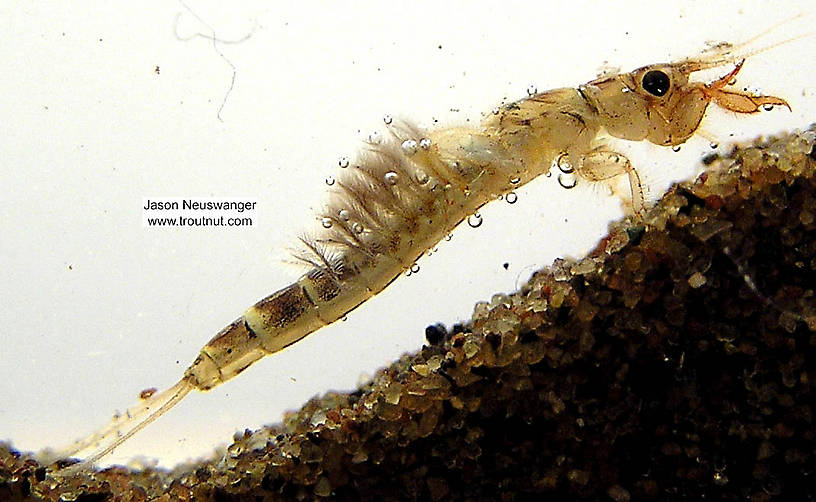 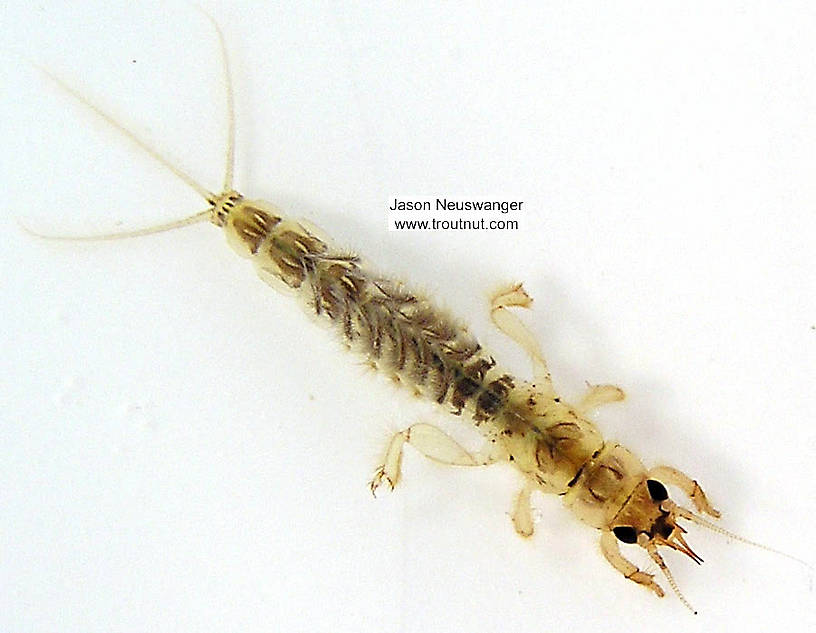 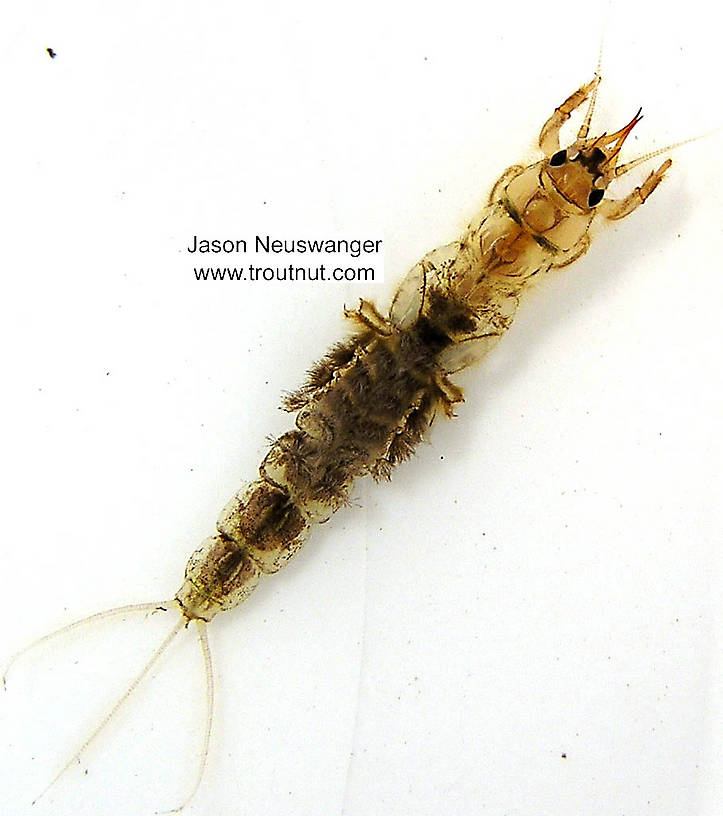 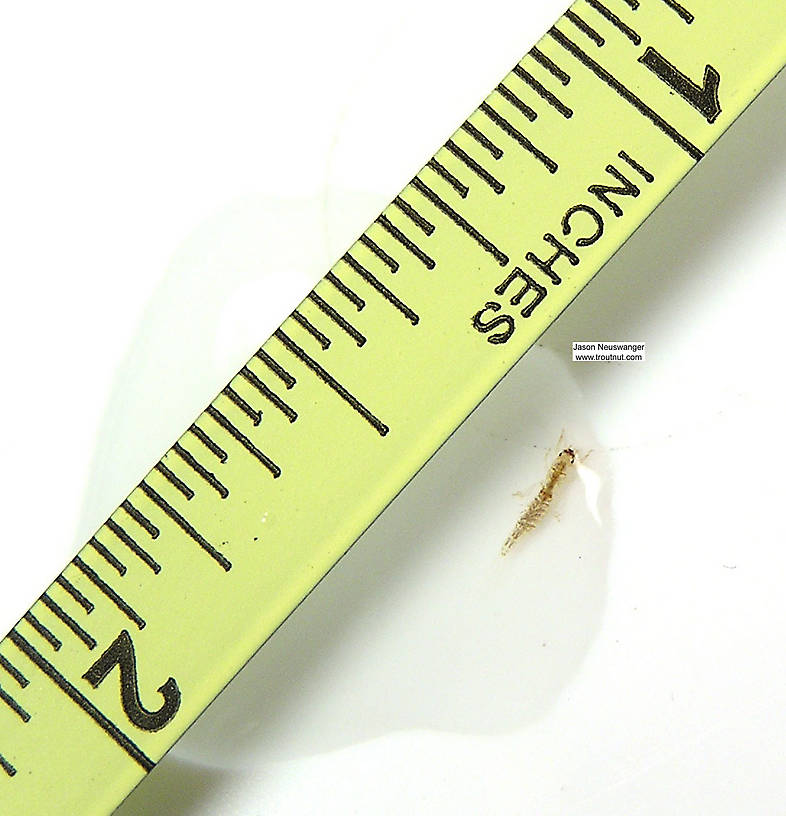 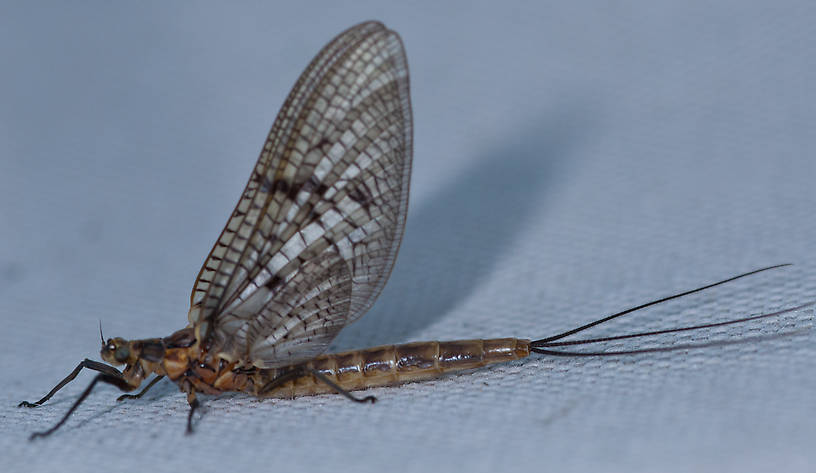 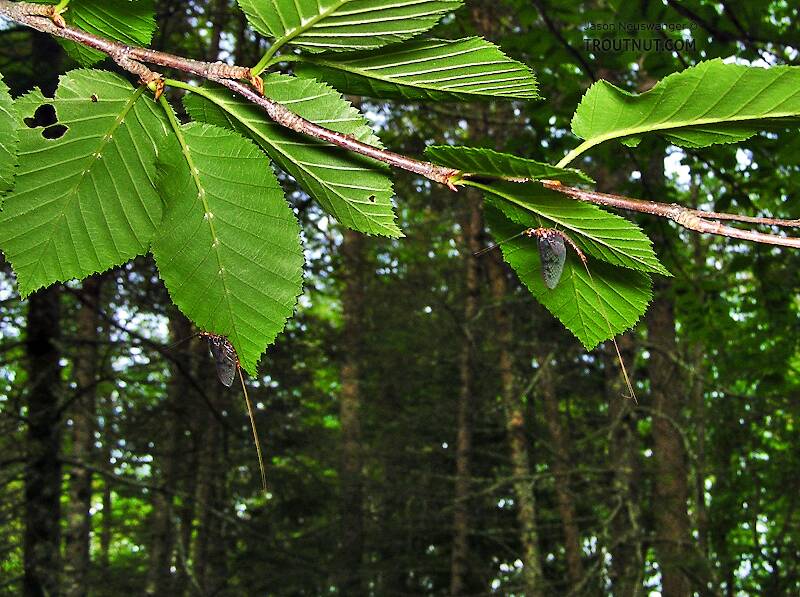 This is the skin a brown drake dun shed when it molted into a spinner. Many of these were on the surface one afternoon, having been blown in after the flies molted on overhanging alders. They were our most noticeable sign of an intense brown drake hatch the previous night and a spinner fall to come.
In this picture: Mayfly Species Ephemera simulans (Brown Drake).
Taken June 16, 2006
Added by Troutnut on July 1, 2006

I lifted a rock in pursuit of a stonefly nymph that had scurried beneath it, and instead I found this Ephemera simulans burrowing mayfly nymph waiting to be photographed.
In this picture: Mayfly Species Ephemera simulans (Brown Drake).
Taken April 16, 2004
Added by Troutnut on January 25, 2006
View Fullsize 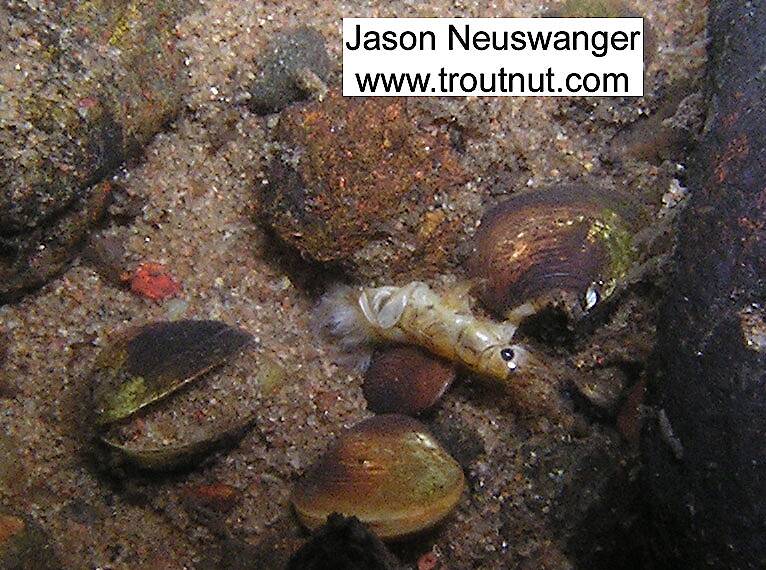 This little Ephemera nymph swam around for a while and tried to burrow into the sand in my photography tank.

Brown Drake?
20 replies
Posted by Derdmann on Jun 19, 2011
Last reply on Jun 29, 2011 by TNEAL
Came across a mayfly on the Paint River by Crystal Falls, Michigan on June 17th. Is it a brown drake?
Thanks.
Reply
Brown Drake - emergence cycle???
5 replies
Posted by AftonAngler on Jun 5, 2006
Last reply on Jun 8, 2006 by Wiflyfisher
Well the Brown Drakes are happening up in Bayfield, Douglas and Sawyer County streams now.

I was talking with the Queen of the Brown Drakes - Chloe Manz the other day and she was insisting that the nymphs only emerge in the late evening. I was countering that I was under the impression that they emerge in the early morning hours and sometimes during the mid day hours.

Observation on my part has subimagos around during the daylight and taking refuge in the riprian foliage until a return to the water in the very late evening (under the right conditions) as imagos for a mating flight and egg laying.

I would be interested to know if anyone has had any success fishing the emerging nymphs. I have ties up some nice, big soft hackles and am itching to give em a whirl.

By the way....there is a masking hatch up near my home stream of Sulphurs that takes a trump card over the bigger Brown Drake most evenings...last night I mistakenly switched to a Brown Drake spinner after very successfully fishing a Sulphur dun for an hour.

I could hear the fish change the sucking noises as the evening progressed into darkness and spent a unfruitfull 1/2 hour steadily working a couple of very nice fish with the brown drake spent pattern before turning my attention to the evidence...I put the headlamp on the surface and saw that the Sulphur spinners were much more predominant.

I then switched to a more appropriate spent pattern and got a bit of redemption!

Glorious evening none the less and lesson well learned!
Reply