Calineuria californica is the largest western species of the Perlidae family, with female adults approaching 40 mm in some locales. This species is perhaps better known by anglers under its former scientific name, Acroneuria californica. It is the primary Golden Stonefly hatch of the West Coast states, a role shared by Hesperoperla pacifica to a lesser degree. Their roles are reversed in the Rocky Mountain states where pacifica takes the top billing. Both are now commonly known as Golden Stones as regional colloquial differences have slowly dissipated. They were both commonly called Brown Willowflies in the Rockies and Golden Stones in the coastal states, which explains the confusion caused by references in older fly fishing literature.

This large stonefly is ubiquitous in western freestones and can provide incredible angling at ther height of their activity. On rivers lacking populations of Pteronarcys californica, they are the largest and most significant hatch of the year. They are generally a late spring/early summer emerger. They crawl out of the water to perch on streamside riparian foliage or rocks where they shed their nymphal shucks. They also mate in the same locations. The females end up back on the water in good numbers and offer good dry fly fishing. But it is the nymphs that offer the best angling opportunities, especially as they stage in the shallows in preparation for emergence.

The male adults of Calineuria and Hesperoperla are easy to tell apart by looking at their hammers. Both are quadrangular but Calineuria is longer than wide. The heads and pronotums of both sexes are dramatically marked in Calineuria while Hesperoperla is more plain.

I caught this female in the vegetation on a trail about 50 feet above the stream. The coloration on its head differs from that of a male I collected recently on a nearby river, and from another female I collected on the same river. But it still keys out confidently to Calineuria, and californica is the only species of that genus in the area.
Collected July 25, 2019 from Mystery Creek #249 in Washington
Added by Troutnut on July 26, 2019
Female Calineuria californica (Golden Stone) Stonefly Adult
1 Picture 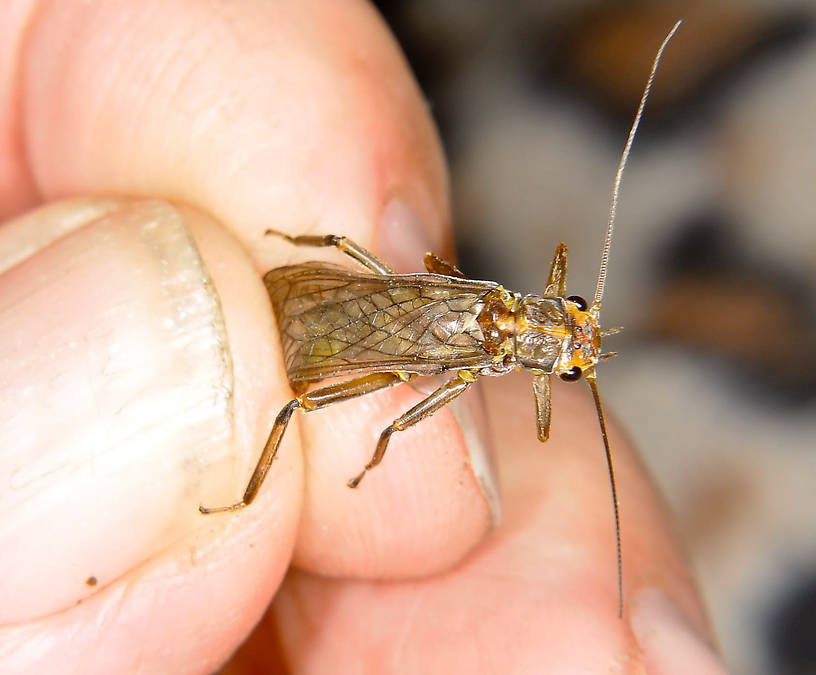 A few of these larger stoneflies were fluttering around the South Fork on an evening dominated by much smaller species.

This one has been difficult to identify. I can't spot any of the gill remnants characteristic of Perlidae, but the wing venation seems to point in that direction. I tried keying it out as Perlodidae but arrived at Isoperla, every western species of which has significantly smaller bodies than this one. 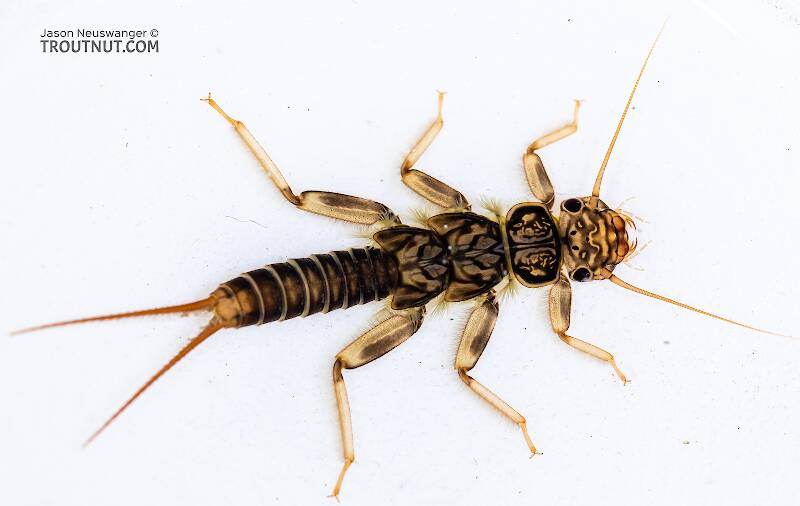 This striking golden stonefly is the first of its species I've had the chance to photograph.
Collected April 12, 2021 from Holder Creek in Washington
Added by Troutnut on April 13, 2021
Calineuria californica (Golden Stone) Stonefly Nymph
8 Pictures 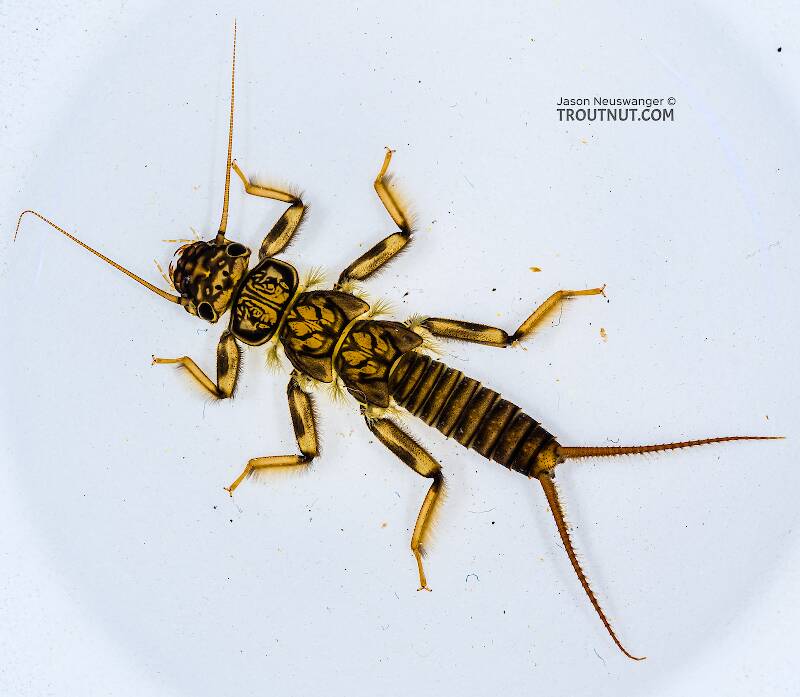 This is a difficult one. It keys convincingly to either Calineuria or Doroneuria. There is no mesal longitudinal row of silky hairs on thorax and abdominal dorsum, in either my pictures or anything I can see up close under the microscope. Lacking those hairs should indicate Calineuria. But abdominal sternum 7 has an incomplete posterior setal fringe, which would indicate Doroneuria, although the key says "usually" on that characteristic. For now I'm going with Calineuria, but it's far from certain. Maybe it's a younger Doroneuria and they don't grow that row of hairs until they're older. The markings on the head, especially the shape of the bright spot around the posterior ocelli, match online images of Calineuria californica better than Doroneuria.
Collected April 24, 2022 from the Yakima River in Washington
Added by Troutnut on April 27, 2022
Calineuria californica (Golden Stone) Stonefly Nymph
1 Picture 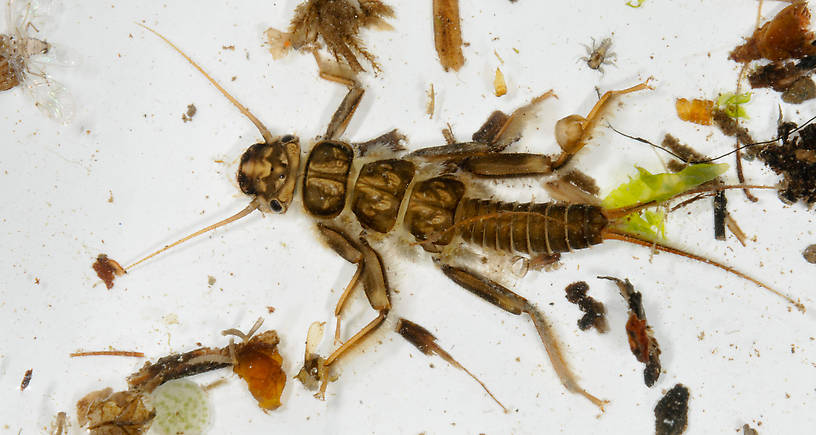 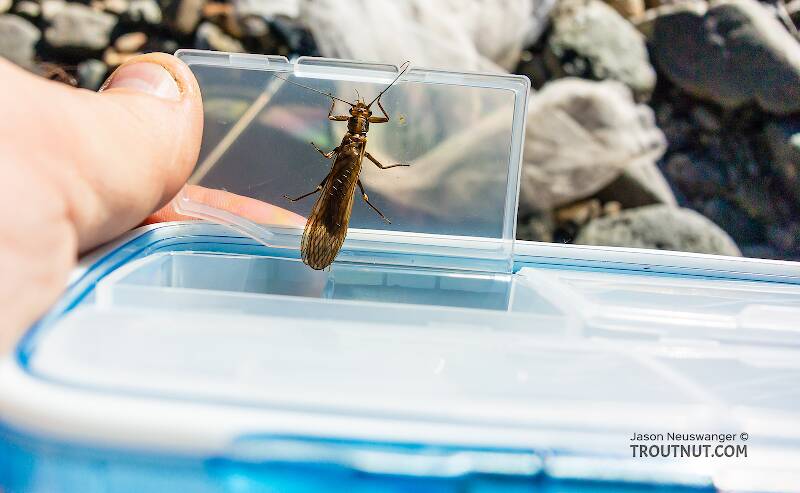 This Calineuria californica female was captured and placed in "bug jail," but was released when I saw it was loaded with eggs and about to drop them, and I could tell it was the same specis (albeit different gender) I photographed a few days ago.
In this picture: Stonefly Species Calineuria californica (Golden Stone).
Taken July 25, 2019 from Mystery Creek #249 in Washington
Added by Troutnut on July 26, 2019