Still too early for decent fishing

By Troutnut on May 22nd, 2022
On May 22, I went up to the South Fork of the Snoqualmie to poke around. The river was still too high and cold from snowmelt to be much good.

Photos by Troutnut from the South Fork Snoqualmie River in Washington 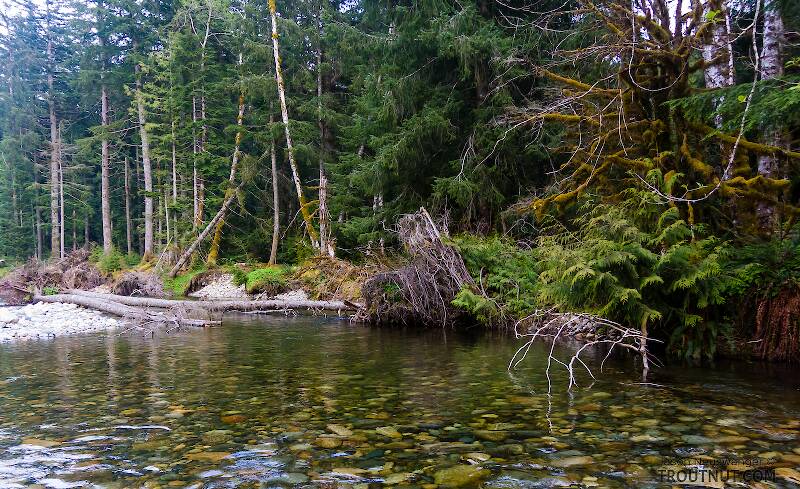 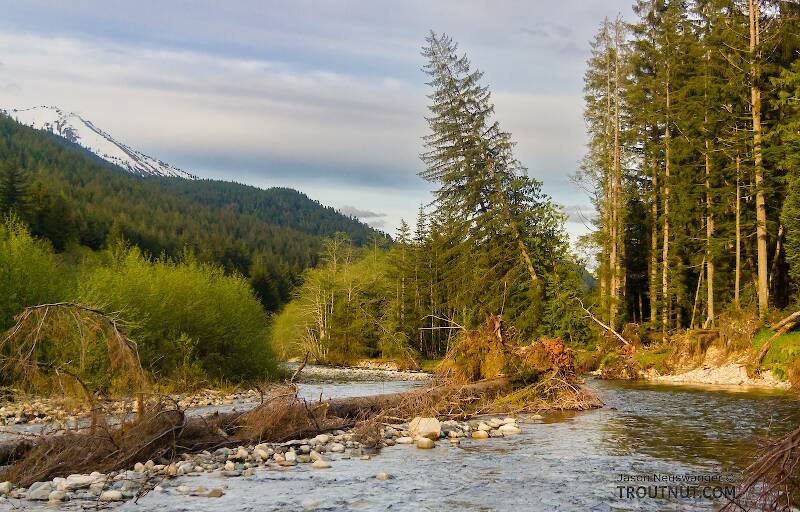 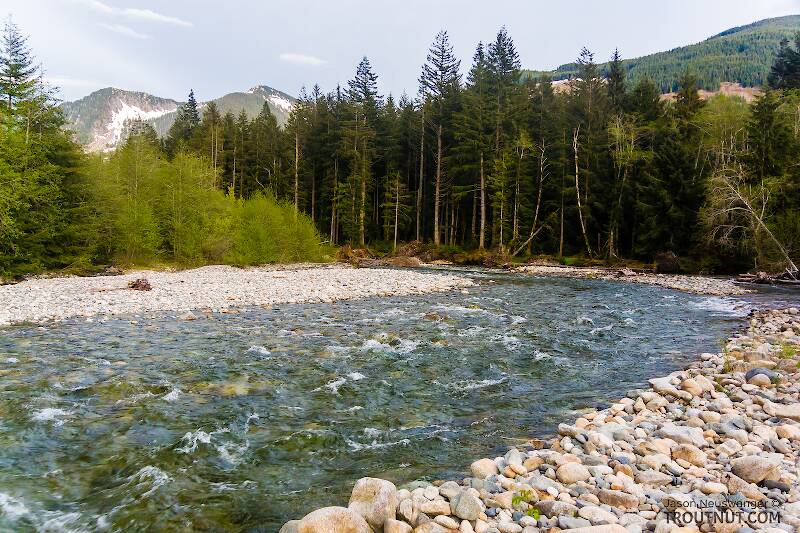 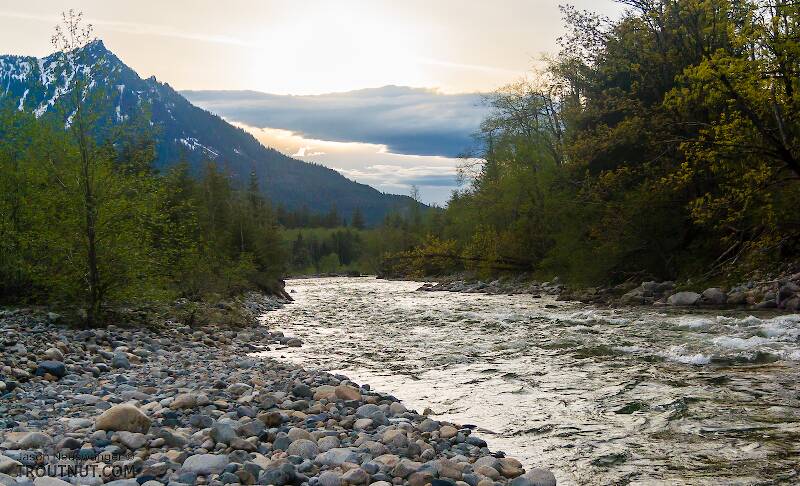 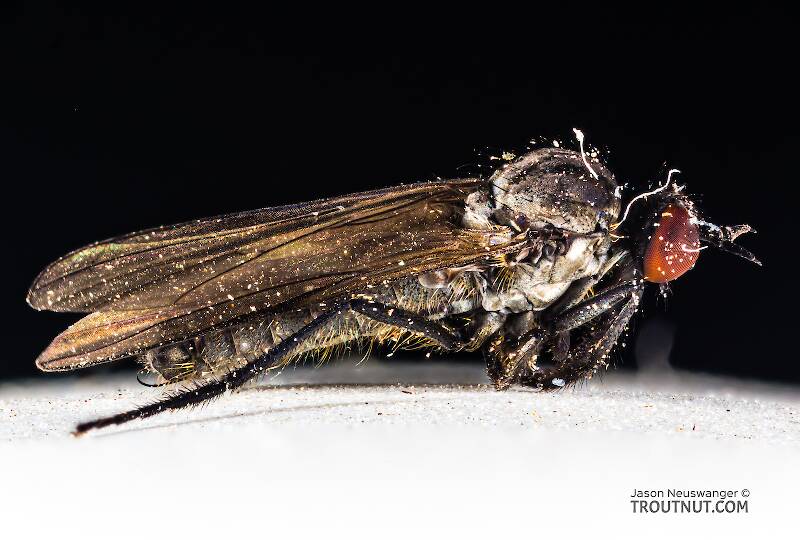 I'm not fully confident in the ID on this one. I couldn't see for sure that there are two equal pads under the tarsal claws instead of three, but it seems that way. The antennae are 4-segmented, although I'm not sure if the last segment counts as a "segment" rather than a "style" or "arista" sticking off the third segment. It has three ocelli. The key characteristics generally point to Empididae except "Vein R4+5 usually branched." That vein certainly isn't branched in this specimen, but the key does say "usually."
Collected May 22, 2022 from the South Fork Snoqualmie River in Washington
Added by Troutnut on May 24, 2022
Chironomidae (Midges) Midge Adult
11 Pictures 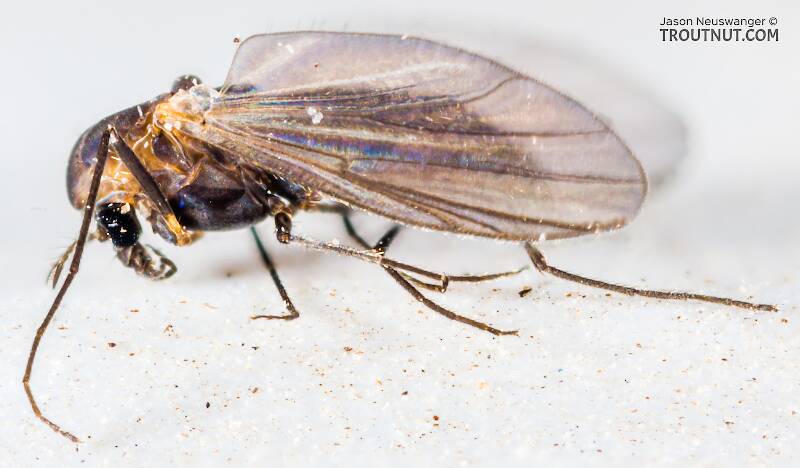 This extremely tiny fly was puzzling to identify. I collected it from a sparse mating swarm just above the surface of the river. It just doesn't have the "look" I'm used to seeing in Chironomids, but the key characteristics in Merritt, Cummins, & Berg point that way.

-Maxillary palp apparently with 4 segments, antenna with 6
-I can't see any ocelli and wing venation doesn't seem to match Axymyiidae
-Costa definitely ends at or near apex of the wing (pictured)
-Obvious characteristics and wing venation rule out a few other things
-Simuliidae seems like a possibility due to the broad wings, but bugguide says they're supposed to have more antennal segments (eleven, though a different source says some have ten, at least in the Southern Hemisphere).
-Postnotum with median longitudinal groove (pictured) rules out Ceratopogonidae

So my guess is some kind of chironomid from a genus that doesn't have the classic midge look. There are some like that.

Collected May 22, 2022 from the South Fork Snoqualmie River in Washington
Added by Troutnut on May 24, 2022
Male Cinygmula uniformis Mayfly Spinner
13 Pictures 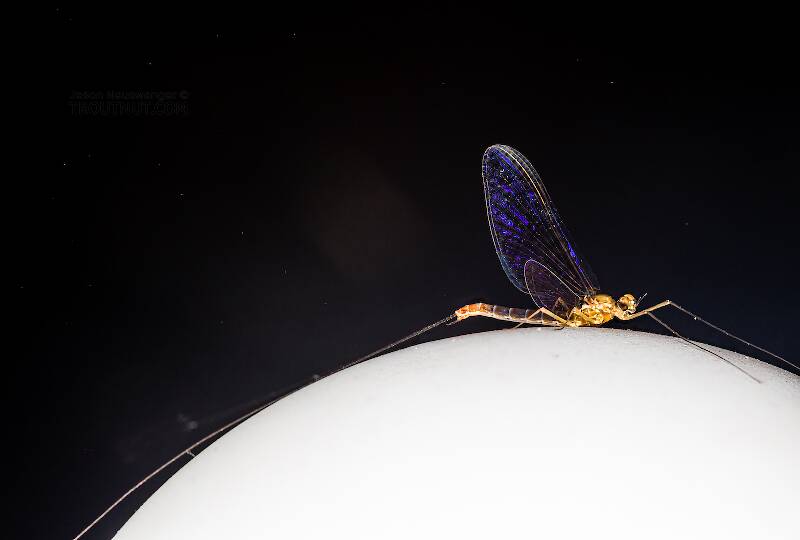 The identification of this specimen is not positive because some of the key characteristics conflict. The uniform amber tint of the wings and the rusty-colored mid-ventral markings on some of the abdominal sternites point to Cinygmula uniformis, but I could not locate the small ventral subapical spines on the penes that are supposed to also diagnose that species (the ones visible in the pictures aren't the ones I'm talking about). If I prioritize that characteristics, this would probably be Cinygmula mimus, but then the wing and sternite shading/markings are wrong.
Collected May 22, 2022 from the South Fork Snoqualmie River in Washington
Added by Troutnut on May 24, 2022
Troutnut.com is copyright © 2004-2022 Jason Neuswanger (email Jason). privacy policy