Putting the 'nut' back in Troutnut, Part II

By Troutnut on June 24th, 2016
This post is a continuation from Part I.

Using the same techniques I figured out the previous night, the action in the morning was even hotter. Pools that seemed fishless when nymphing the previous evening came alive. Swinging the streamer through the calmer spots amidst the whitewater brought violent strikes in which big rainbows, flashing silver and red and gold sides, rocketed into the air and cartwheeled back into the river with a big splash. For a brief, beautiful hour, almost every cast drew one of these spectacular strikes.

Hooking fish was the easy part. These were strong, wild, fast-water fish that see a lot of pressure, and they knew what to do when hooked. Every fish I hooked over 20 inches tore off downstream into the maelstrom while I desperately tried to keep up, clamoring over the boulders on the edge of the stream, blocked in by brush on the bank side and whitewater on the other. The drag on my Hardy large arbor reel screamed as these big fish turned their sides to the raging current and shot off toward the ocean. The first few fish wrapped my line up in the rocks or got so far downstream they could easily turn back upstream and spit the hook. I lost the first few big ones.

Finally, one of these fights went my way, and I landed this 21-incher: Josh was seeing some action on rainbows, too. But it was hard to communicate over the roar of the whitewater. He had never caught a really big trout on the fly, and a main goal of the trip was to get him into one. He had hooked and lost a nice one the night before. Out of pure good luck, I was nearby with the camera when he hooked into a 20-incher in the morning. I wasn't quite close enough to help with the landing net (his was lost to a tree during the hike in), but he skillfully landed it without one: As we reached midday, the action slowed. But there was one spot I knew there were fish I hadn't caught. Earlier I had somehow dropped a fly into the dark water behind the far boulder in the picture below, and a rainbow immediately chased it, but the whitewater in the middle grabbed my line and yanked the fly away. It was about a 75-foot cast, and I've never had much practice casting long distances -- let alone throwing a streamer and split shot with my 5-weight, and obstacles to the backcast. But this would be as good a time as any to learn. I stood atop the rock for probably an hour, working on my technique. At first, maybe one in every ten or fifteen casts found its mark, and the fly swam through the target zone for a second or two before being ripped out by the current in between. Almost every time it did, the trout chased, and every time they did, they missed, often by the narrowest of margins. The first trout I'd seen in that spot was just a small one, 14 inches or so, but one of the first good repeat attempts drew out a monster. It made multiple follows and even aerial acrobatic attacks on my fly that never quite connected.

Eventually I improved my casting to 1 in 5 or so finding its mark, and I hooked the 14-incher. It fought like a fish twice its weight in the current, and was the most rewarding fish of that size I'd ever landed. Eschewing any chance at easier fish in other pools, I returned to trying for the big one.

After an hour or so, half my casts were landing, and half of those were drawing missed strikes. Finally, I connected! The big rainbow leaped into the air and then shot off into the same fast water that kept me from hooking it for an hour. The few remaining feet of fly line peeled off my reel into the backing, and I jumped down off the boulder to pursue. But I never had a chance. It was a fitting end to this trip that the big fish won the day. But I've never had so much fun losing a fish in my life. 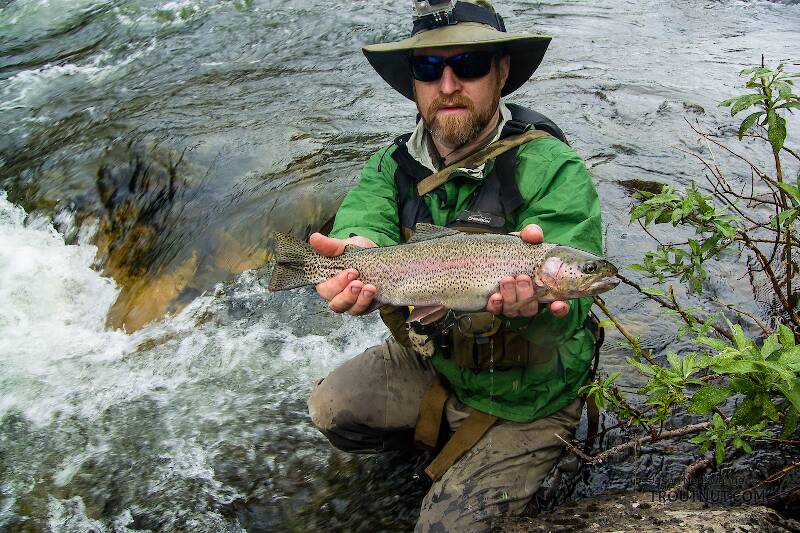 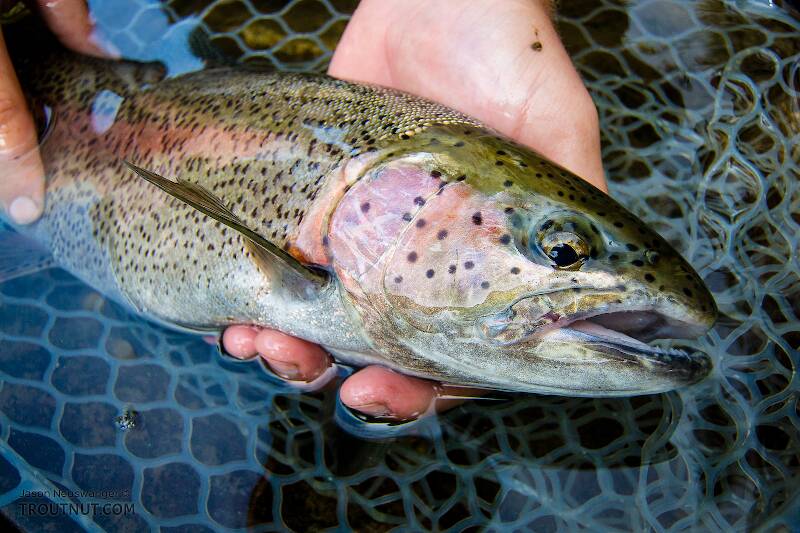 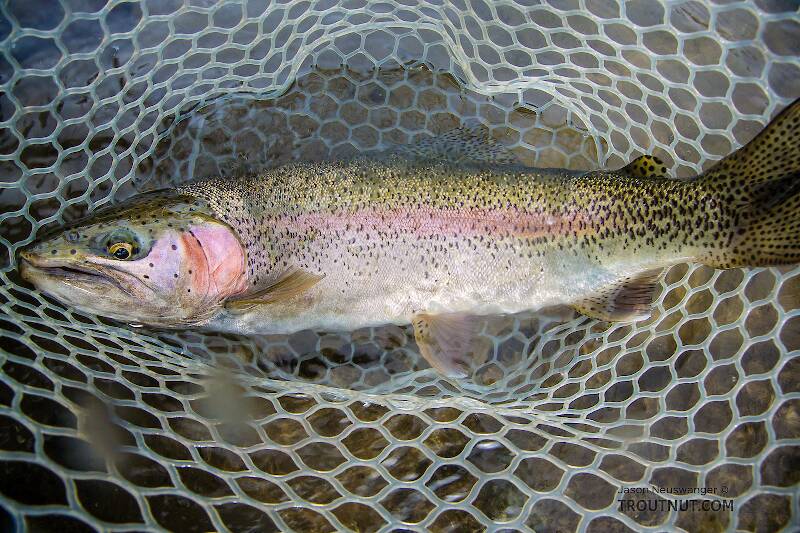 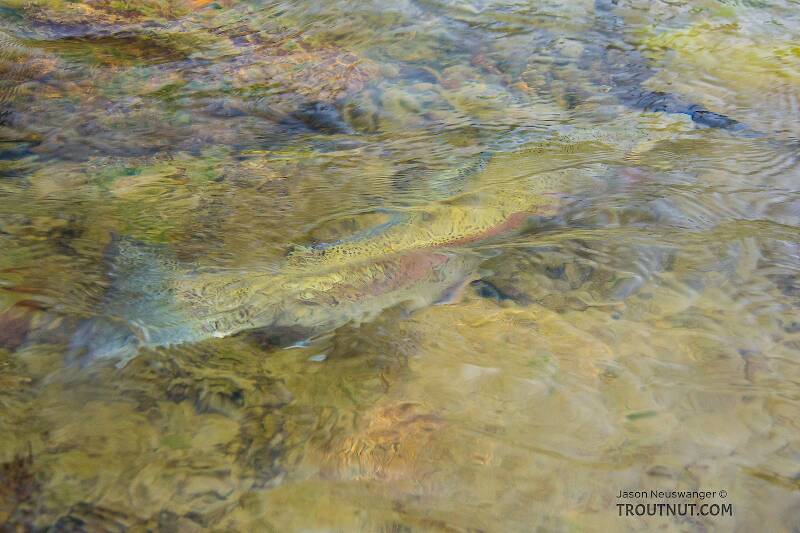 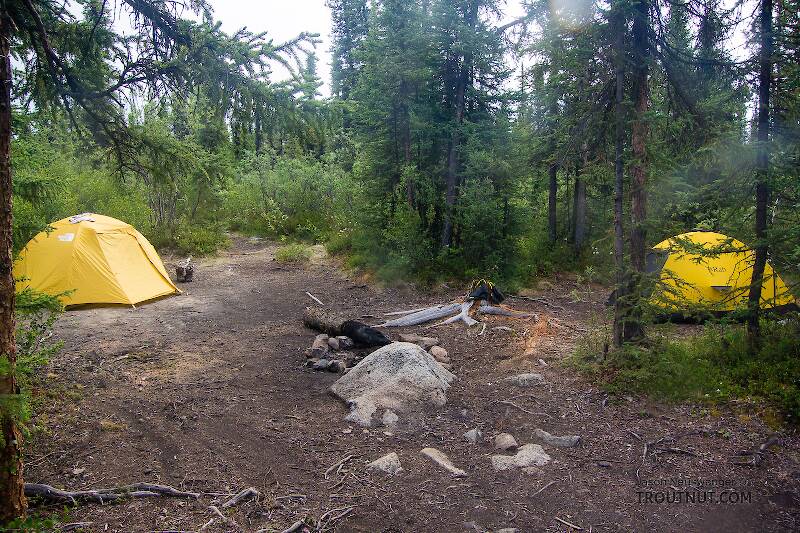 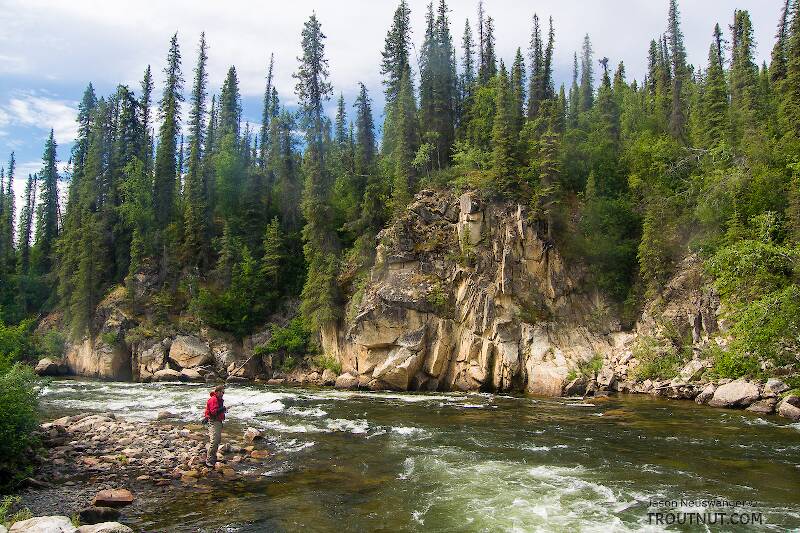 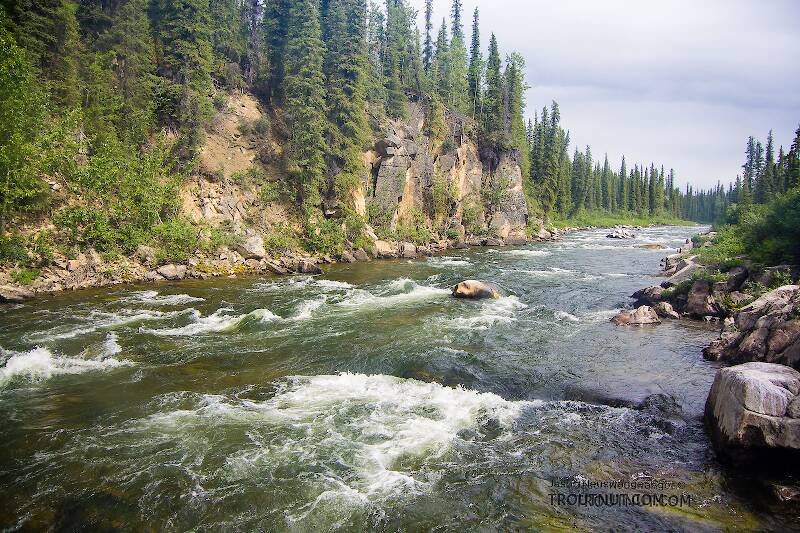 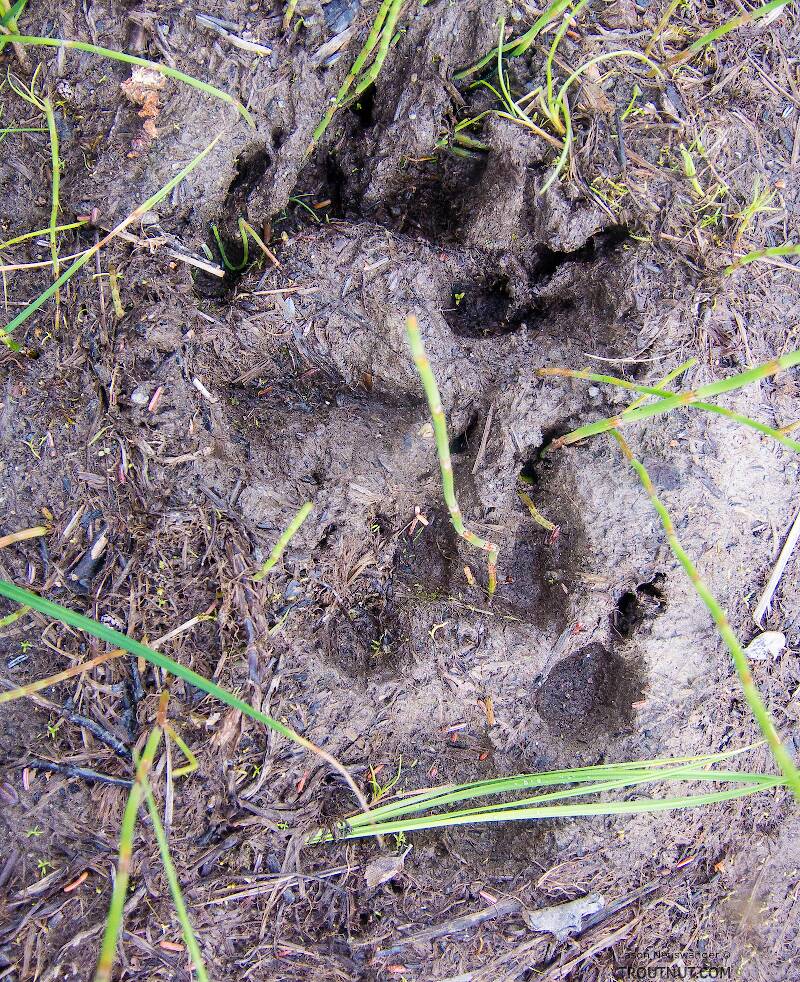 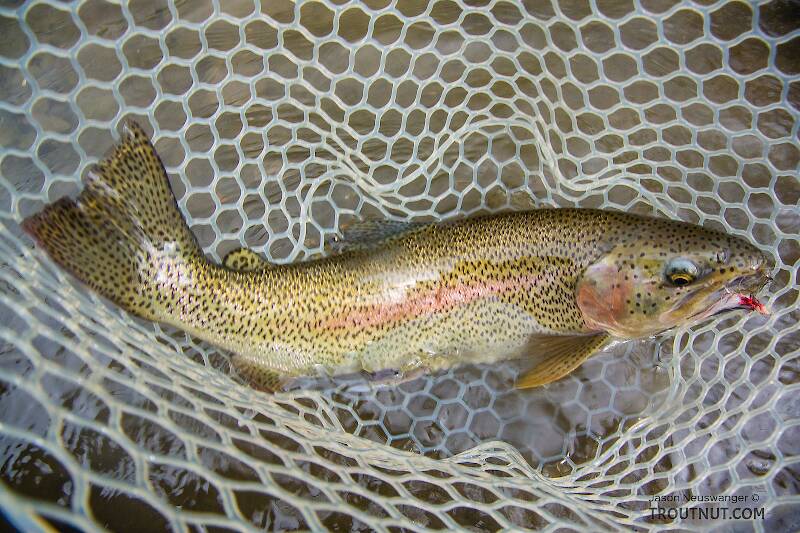 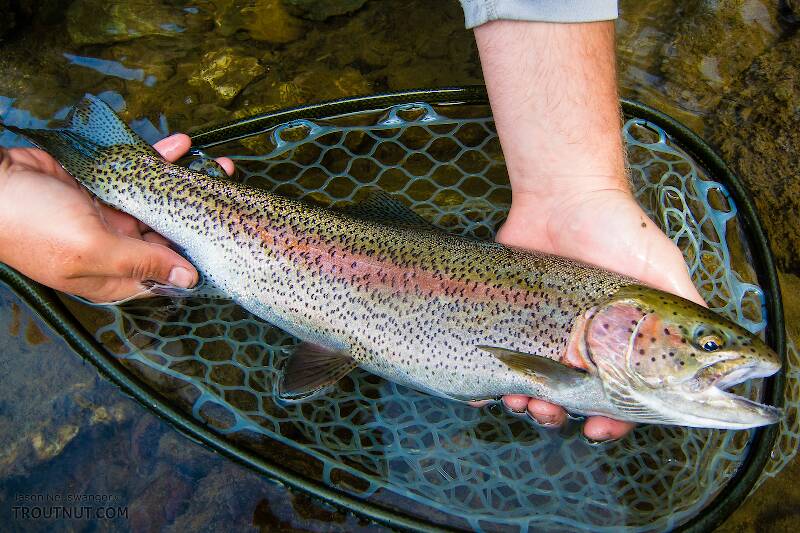 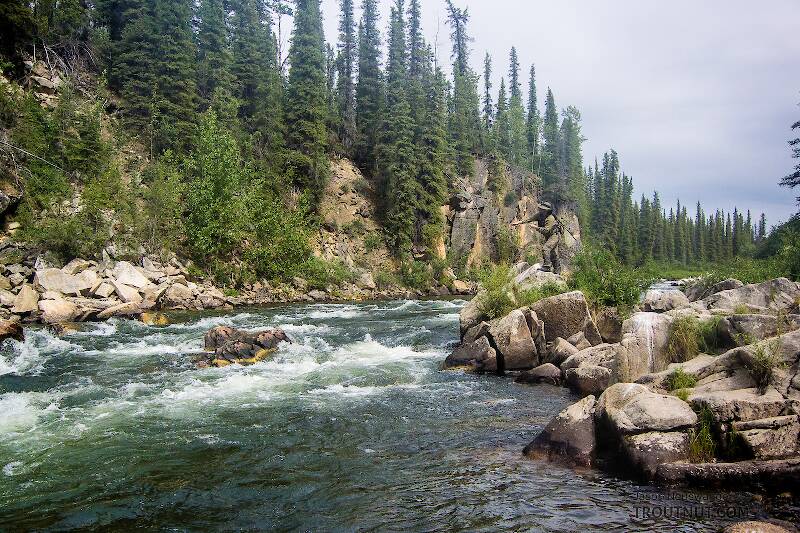 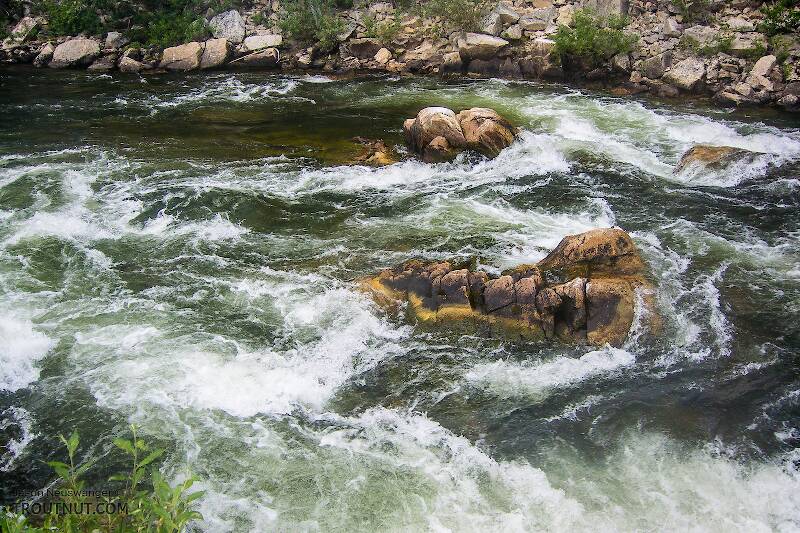 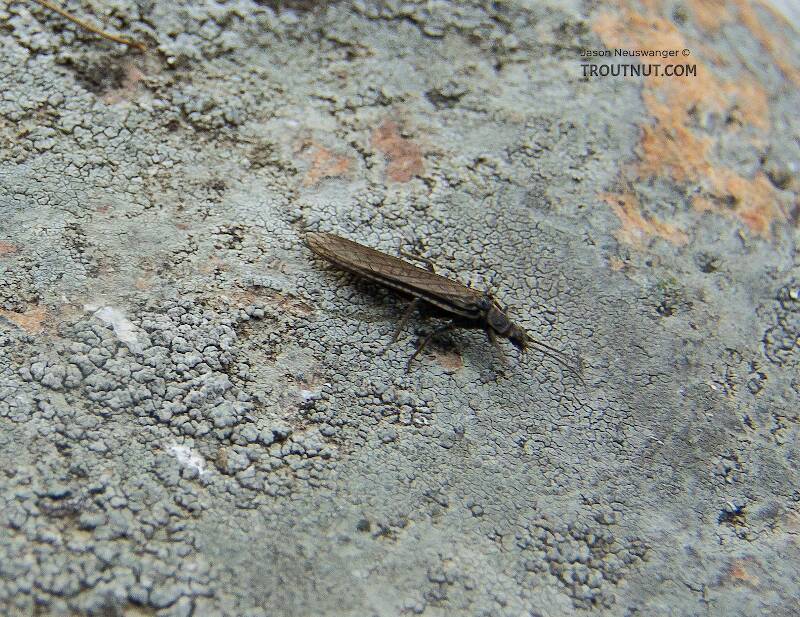